Auto-suggest helps you quickly narrow down your search results by suggesting possible matches as you type.
Showing results for
Search instead for
Do you mean
Reply
Topic Options
jdsmort
Occasional Contributor

System is W10 Pro(build 18362_release.190318-1202.. not yet updated to 1909 yet.
The scanner in question is on a Canon MP495.. All latest drivers from Canon installed. It is being used Wireless.
Problem is, on initial install, the scanner software when started (Canon MP Navigator) and asked to scan, will immediately put up a message to the effect the scanner is warming up, and then within a couple of seconds, start the scan.. this is what it is MEANT to do.
After some time.. maybe a day, maybe a week, depending on when I next need to scan... when I start the MP Navigator and ask to scan it goes away and has a think for maybe 3 or 4 minutes after the "Warming up" message comes up. Then starts the scan. If I stop and then restart, still the sane result. Also, as the software has a feature enabling multiple scans in the one session, if I use this, I still have to wait for this long period for each scan.

I checked with Canon, but they could not offer a solution..
The way I fix is to remove the printer.. I do this from within the Device Manager.. Delete the appropriate Print Queue, and remove the device on prompt.. Then reinstall the driver.. it finds the printer on the network and installs it again.. and then everything works fine, or at least within that session.
I have not yet managed to isolate exactly when this stops responding. I originally thought after I installed a Windows update, but later found this was not the cause.. (stopped responding with no updates installed after the previous use)

Canon drivers used are
mp68-win-mp495-1_03-ea24.exe (driver)
mpnx_4_0-win-4_03-ea23_2.exe (MP Navigator)
The driver also installs a Network tool, which finds the printer on the network even though the scan will not start promptly.

I did not bother with the XPS driver as I do not use this to print anything anyway.... purely used as a scanner.
Any ideas??

This sounds like a network or software issue based on your description.  Since removing and reinstalling the printer seems to fix the problem " (temporarily) I think its network related.

Help by ansewing the following, please.

Can you print every time you send a job to the MP495?  Even after a days? (Knowing this might help)

Your posts states, "if I stop and restart".  Restart what?  A scanning operation, your computer or?

What happens if you connect the printer via a USB cable.  Same behavior?

Do you have a second computer to test with?  Does the behavior follow?  Exhibit the same behavior?

I will test with another computer.. have not tried that, as I use my main system..PC.. to do the scanning work. I stated I do not use this as a printer but will check to see if the print is OK. I will also check with USB. I did note that the Canon U Network tool always finds the printer promptly, which is why I did not think of it as being wireless/network related.
Will test and let you know the results.
Report Inappropriate Content
Message 3 of 11 (1,893 Views)
Reply
0 Kudos

The error may be related to a firewall or anti-spyware program on the system.  Try closing the MP Navigator.  Then temporarily disable any security programs that are running.  Once this has been done, reopen the MP Navigator and try scanning again.

Did this answer your question? Please click the Accept as Solution button so that others may find the answer as well.
Report Inappropriate Content
Message 4 of 11 (1,887 Views)
Reply
0 Kudos
jdsmort
Occasional Contributor

Not likely Firewall, as it is Windows built in and exceptions are already in place. As for Antivirus, same applies.. only Windows Defender used.
I have checked with Defender disabled, and no difference.
This is annoying, as it works OK with USB but inconvenient to connect a cable with my setup.
Also I have to wait to find out if not working, and then make changes WITHOUT deleting/reinstalling to find out what the cause is. Currently installed on a laptop too, which worked fine immediately, though I have to say MP Navigator is VERY slow to start on any system.
For your info, I am an IT consultant, brought up on computers almost from their inception, both hardware and software able..and the most annoying OS so far is W10 with constant changes to systems from "Feature Updates" changing defaults and interfering with customisations.. something very much frowned upon in the old days.. Upgrades are not meant to interfere with current user settings.. but that's by the by.
Report Inappropriate Content
Message 5 of 11 (1,880 Views)
Reply
0 Kudos
jdsmort
Occasional Contributor

I think I have found the answer...   after use I actually switch the printer off totally. I noticed just now I wanted to use the scanner again..  not there..  so I looked at it's configuration using the ij Network tool and found the ip address had been chaanged..  it is set by the dhcp server, and thus could end up with a different ip..  so when trying to use..  not same as previous settings??  maybe this is the solution.. to send the new config to the printer or if possible to set a fixed IP ..  I have that on my Xerox Laser printer and never have an issue connecting.

Only trouble is I do not know how to set a fixed ip on the printer. Is there any way to do that?

Thats where I was heading with this and was why I asked if you could print every time.

In this situation, leave the printer set to DHCP, reserve an IP on your router using its MAC address.  This will be easy once the device has been successfully connected.  After doing this, power cycle the printer and ensure the IJ Networking Tool has the conrrect IP.

The best part about using this configuration, it only has to be done once. Hoping that the WSD port will reliably resolve and find the printer on the network each time you want to use the device is not something worth counting on.

Good work on your part getting to this point.

I will probably end up moving the printer to a different position and permanently set it as USB connect..  I have a particular reason for needing to scan..  my wife is near blind, and a she likes to knit, needsKnitting patterns made larger so she can read them..  easiest way i find is to scaan to .jpg, crop out parts and then print those to full page...  giving large print...  but frustrating when I have to wait for up to 4 minutes each time I ask to scan..  I know the USB connection works fine, but because of my system and layout, not very convenient to connect directly. I will just retreve my 4M long print cable and use that.

I will also try the mac address option you suggest, just to see if that makes any difference..

Tested with the assigning IP to MAC address...  not that easy to find the mac address other than by roundabout means, but successfully reserved an IP to that address...  restarted the printer.. (shut down fully..  restart..)  logged off and then back on to W10...  Tested with MP-Navigator...  takes 70 seconds to react to first scan...  then for second, a further 70 seconds...  So not really any appreciable difference.

Also noted that MP Navigator process was showing as using VERY HIGH power in this situation.

When using with a USB connection, approximately 1 second from asking to scan (warming up notice) to actual scanning.

The network tool still finds the wireless printer very promptly, but refuses to connect for that stupidly long period still.

So that possible solution was not a solution.

Also for your interest, this is the result of the Wireless signal connection test, and advanced test on the scanner..  no problems with connectivity.

Performance check gives Sig.Strength 97%, Link quality 100%... advanced test, see attachment... but still the same stupid delay, unless reinstalled prior to trying to scan.
Honestly seems to me to be some sort of software issue with the MP Navigator, as each time it is started, very slow to come on.. (using the wireless connection) and then this long delay with scanning. If I set it to USB and use that, no problem, quick start, and immediate response.MP Navigator install is latest, 4.03 ( filename mpnx_4_0-win-4_03-ea23_2.exe 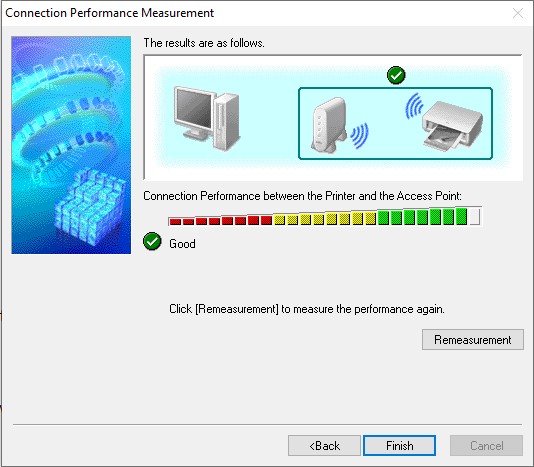