I upgraded to 4.12.0.4 yesterday and overall it seems to work well but with this latest update, randomly the CTRL + D convert and save keyboard shortcut doesn't work after using some of the editing tools on an image.

It is random and not that frequent but enough to be annoying when processing several hundred images.. Either using the menu  convert and save option or clicking on a couple of different tools will restore it to full functionality.  Hopefully there will be a 0.5 update to address this little glitch.

Speed seems the same as prior versions and is responsive except when running digital lens optimizer on 5DS R files it can take 45 seconds at times to finish that operation and this is on a fast dual processor workstation.  This is just a slow algorithm in DPP and during the processing time CPU and GPU load never go over 20% so it doesn't do a great job of utilizing available resources.  Each Xeon processor has its own 128 GB of fast RAM so memory isn't the issue and memory utilization stays below 10%.

AND on edit, more strange CTRL + D behavior:  When shooting multiple bodies at an event, during initial file transfer I keep the 5DS R files in a separate directory from the 1DX and 1DX 2 files because they tend to need different treatment in post.  After finishing the 1DX series files I navigated to the 5DS R directory and about midway through those files, CTRL + D would bring up the normal convert and save dialogue box BUT it would also bring up the same dialogue box you get when quitting DPP asking if you want to save photo file changes.  So there is definitely some oddball glitch.

We are sorry to hear that these issues with the software are occurring.  We recommend un-installing the software and then performing a complete re-install on the software to see if this resolves the issue.  Again, we apologize that this occurs but appreciate you bringing this to our attention.

Thanks for your fast response and I appreciate that Canon personnel are so active (and helpful!) on this forum.

I always do a fresh install with a new version of DPP because installing without removing the old version did cause some issues with early prior updates.  But this little glitch occurs with both my Z series workstation and Z book laptop after a fresh install.  It is random and quite infrequent and not a huge deal because the software still works fine outside of this minor annoyance which I am sure will disappear in a future upgrade.

I still have full faith in the performance of my Canon products and I am looking forward to the arrival of my 1DX III which was pre-ordered last month.  It will join its 1DX and 1DX 2 elder siblings in time for high school soccer season.

And one more interesting bit of DPP 4.12.0.4 trivia, when working with at least some older CR2 files this version goes to black and white mode when the crop tab is selected.  It doesn't do any harm but is interesting behavior.  Once out of the crop window, color returns.

iPhone photo of DPP cropping a RAW file from my Canon 1D Mark 2. 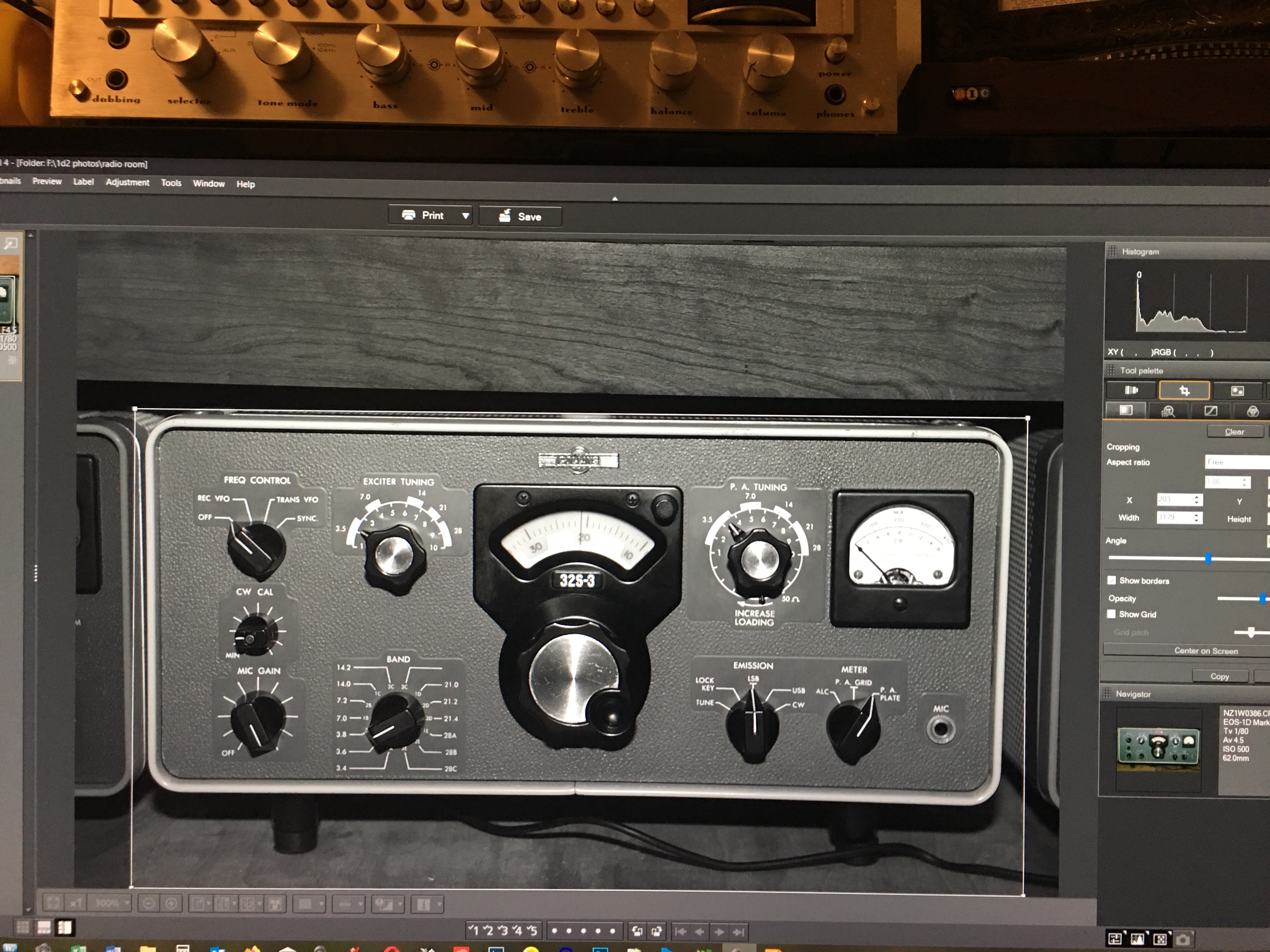 Very cool old Marantz reciever there above your monitor. A 2285 perhaps?

You can tell it's a good one 'cuz it appears to have a high "K.P.D." (Knobs Per Dollar) factor.

Good eye BurnUnit 🙂  It is a 2285B.  Other than replacing some filter capacitors, dial lamps, and setting the output stage bias it has needed no maintenance.

These Marantz separates are with the vintage amateur radio gear in another room.  They did make some nice looking and sounding gear!  I like your money/quality metric 🙂 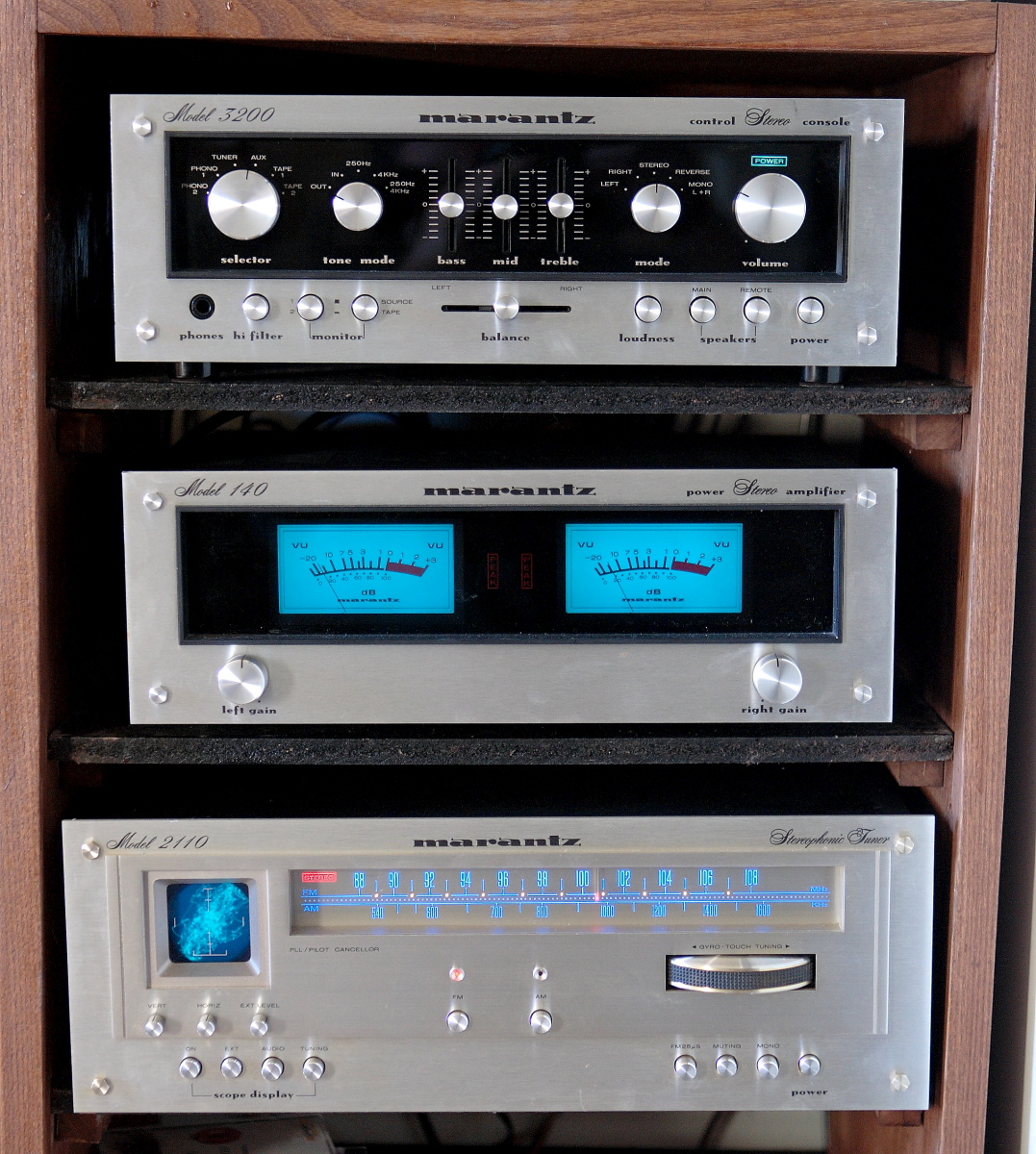