Auto-suggest helps you quickly narrow down your search results by suggesting possible matches as you type.
Showing results for
Search instead for
Do you mean
Reply
Topic Options
Highlighted
Peter_Narramore
New Contributor

PS in my web trawling there had been unanimous agreement that you should not run your ink tanks dry. I had done just that and it was probably the cause of my original problem.
Report Inappropriate Content
Message 21 of 24 (2,234 Views)
Reply
1 Kudo
Highlighted
janeintoronto
Occasional Contributor

Re: not letting ink tanks run dry.  Thanks for this, though it is a little frustrating since my Canon printer, MX 870, always says they're empty when they are still working.

Perhaps my suggestion will help someone coming across this thread. I only have Canon 4920 printers, not some of the other models mentioned here, but I suspect we all have similar issues possibly with similar solutions.

My yellow was not printing correctly. Head cleaning would sometimes clear it for a short while, then it clogged again. This showed up as a “smear” of white (non-printing area) in the yellow bar of a test print. My last 4920 printer did this as well late in its life and I finally threw it out, purchasing another one on an auction site since Canon no longer sells this excellent, inexpensive, compact, 2-tray printer (envelopes or labels in top tray, paper in the bottom tray, YAHOO! There’s nothing like it now except the bulky awkward unreliable MB2320.)

This time I was more determined to fix it especially since I’ve only been using this printer a few months (but no warranty on it). Repeated cleanings and “deep cleanings” were not working. I finally learned from YouTube how to remove the print head. This is simple, anyone can do it. Just pretend you’re adding ink (which moves the cartridge holder into position) unplug the printer for safety (and to possibly avoid shorting the printer head), lift the bar in front, and reach in to remove the head.

I tried soaking the bottom of the head in a shallow tray of Windex. I tried using some “ink dissolving” fluids from my Epson printer setup. I put the head back in but no luck, yellow still clogged. Other heads also clogged during the Windex process, but they cleared up again with normal cleanings.

I had another “new” 4920 on the shelf as a backup for this one (did I say how much I like this little printer?) so finally, to determine if I really had a head problem or not, I took out the head from the new printer and put it in the old printer. It worked fine right off the bat, perfect test print. So I figured I’d buy a new head from an auction site. Canon heads are about $95. there right now, with Chinese knockoffs running much less, I no idea if they work though. I figured I’d put the replacement head in the new printer, ready for use when the old printer finally dies.

With nothing to lose now on the old printer head, I got more aggressive. There are videos of people running warm water over the print head, using a garden hose, etc. to clean it. But on my Epson printer (another story) I’d learned you could use a syringe to force cleaning solution (or Windex) through the head and this seemed like something to try on the Canon. I located some tubing which just fit over the connector which the cartridge seats upon. In one video I saw that a guy used a forceps to remove a small rubber seal around this connector (in the print head, this is, just below where the cartridge lets out ink. One rubber seal for each ink color but you only need to pull the one you’re trying to clear). I pulled out the rubber seal, it comes out easy but try not to damage it with a sharp tool. (AND NOTE how it came out so you can put it back in correctly). I stuck the rubber tubing over the connector, with the other tubing end already connected to a syringe. Filled the syringe with Windex and pressed down. It’ll escape around the connector as you press, but you should also see ink and fluid coming out the bottom of the print head (hold it over some paper towels to monitor progress). I tried to hold the print head in such a way that no fluid got on the electric contacts on the back of the print head. I repeated this process maybe 5 times, until no ink color (yellow) came out of the print head onto the paper towel beneath, only Windex. It’s a mess, wear rubber gloves.

Dry the print head with paper towels. If you got it soaking wet, let it sit a while under a warm lamp or the like. I am not sure what happens if the electrical contacts have fluids on them when you reinsert the head into the printer.

So now I removed the “new” print head I’d been using since stealing it from the new printer, and put the old print head back in the old machine. First test print: not good. Ran a cleaning cycle: next test print: perfect! I’ve made a few prints since this event earlier today and much to my surprise believe I’ve cleared the problem. If It re-occurs, I’ll put in the “new” print head again and buy another print head on the auction site as a backup and to use in the new printer when/if needed.

Sorry I don’t have photos to offer, (I'll try to a photo of the syringe...use 2 hands and wear gloves!) 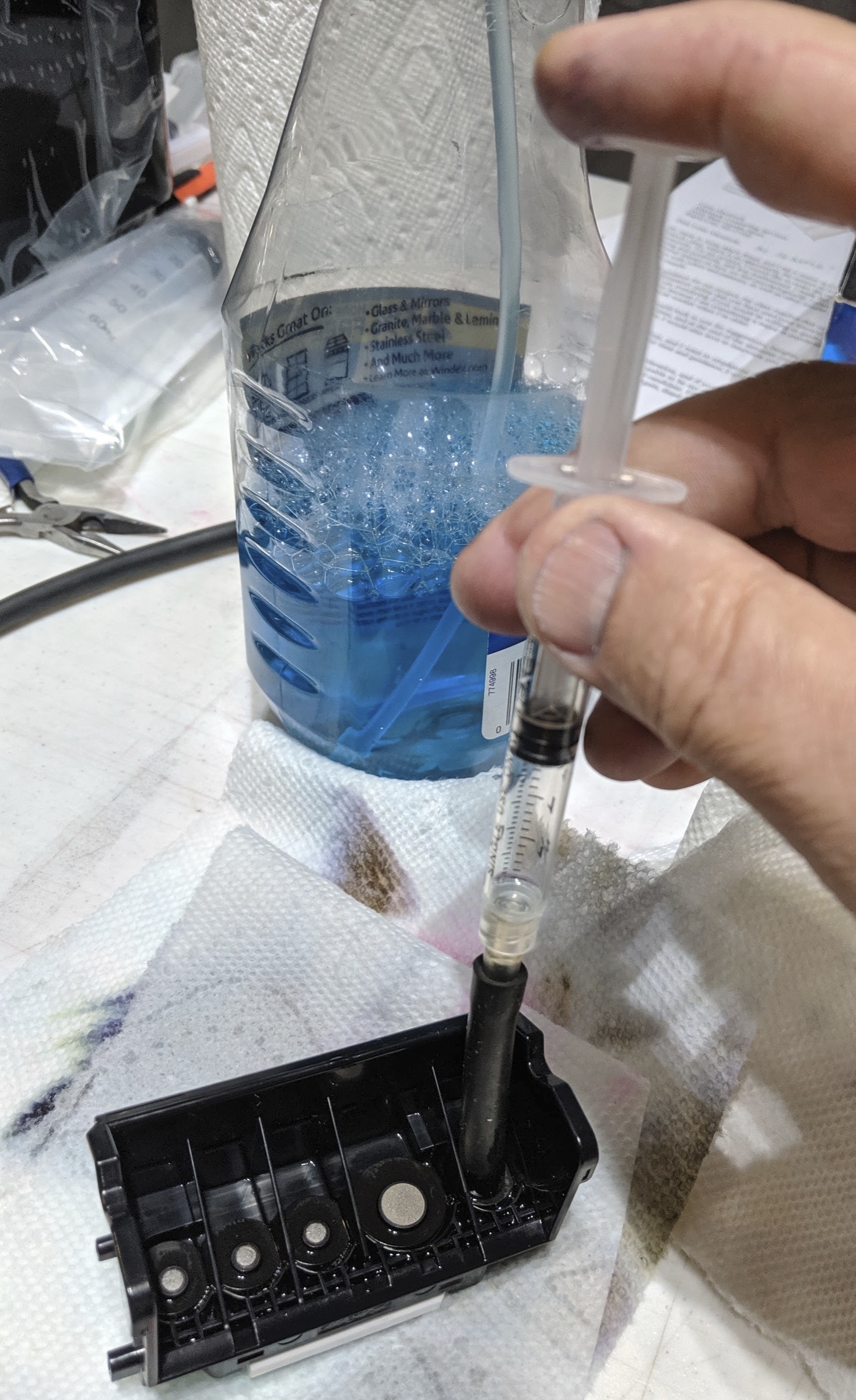 Again, just find a small syringe, some rubber tubing (hardware store) that will stretch or fit over the print head ink inlet, and press down firmly on the tubing as you push down on the syringe, trying to force most of the Windex down into the print head. Do it slowly and gradually. Slowly and gradually. It may take some practice to get it through there.  The tubing I used is black rubber, 1/4 inch outside diameter, and 3/16 inside diameter. Again it was not a perfect fit but I could get sort of a seal and force the Windex through the print head. Best of luck.

Thank you for the replies. I figured it out. My problem is that the ink needed replacement. Didn't show it was empty but it was.