Recently I have noticed that my EOS R is having trouble focusing.

I am using back button focus with AI servo but this also happens with the AF and metering bound to the shutter button.

I have tried finding more contrasting areas to focus, different AF modes, larger AF points and with and without back button focus.

I have also tried 3 different lenses and it seems to be the same in each.

Here is a video showing the problem:

in the video I am in manual mode, using back button single point AF with the RF 24-105

2 people had this problem.
Me too
2 Likes
Reply
1 ACCEPTED SOLUTION
Go to solution

I wanted to update some information here I found out from Canon.  This may have solve this perplexing issue.  I never heard back from Canon on this issue.  After rattling the cage repeatedly with Customer Support, I finally got a Level III (I didn't know there was such a level!) Tech Support person who called me.  Nice guy.  He understood the problem and offered to "figure it out" as the manual (neither RC-6 or any camera manual) says nothing.  He then got back to me the next day offered this simple solution:

Be sure the camera is set to "AF One Shot" not "Servo AF." Simple.  So far, it seemed to work. Nowhere does Canon offer that short but critical piece of information.  Much thanks to the Level III technician for figuring it out. Makes sense.  A lot of time, effort and frustration wasted due to lack of a simple instruction from Canon. Again, thanks to the technician. (Even he noted "it should be in the instructions!")

1 person found this solution to be helpful.
Me too
1 Like
Reply
21 REPLIES 21
Go to solution

There are a few troubleshooting steps I'd like to help resolve this issue. We'll reset the camera, which should restore it to a default state. These steps should clear out the memory and thereby any errors which may be present.

- Anything attached or installed in the camera — memory cards, the lens, the battery, battery grips should all be removed.

- Once the lens is off let's check it using the steps below.

a) Clean the lens contacts* to restore connection with the body.

b) Try using a different memory card. All memory cards should be properly formatted in your camera prior to use.

*Warning - Do not clean lens contacts on either a Canon lens or the camera body with an eraser! It's easy to rub off the gold plating on these contacts and end up with data communication problems! Our strong recommendation is to use a soft, clean, micro fiber cloth. Please do not use anything abrasive.

c) Try using a different Canon EF series lens. It doesn't have to be the same focal length as the one you were using.

d) If you are using a third party lens, we recommend discontinuing its use. There can sometimes be communication error related issues with third-party lenses. Ensuring that you're using a Canon lens eliminates that as a potential factor in the error.

If the issues seem to persist the next step would be to send the equipment to Canon for service.

You may fill out an online repair request form at the following link to setup your repair using our online service.

Did this answer your question? Please click the Accept as Solution button so that others may find the answer as well.
0 Likes
Reply
Go to solution

Did this work?
0 Likes
Reply
Go to solution

@Supreet_k wrote:
Did this work?

Did you try it?

R5 and the software/firmware is most likely the culprit with the focus-timing.

I have totally out of focus group shots on a "trip of a lifetime."  I was very disappointed.  I have NEVER had this problem before. I used RF 24-105mmL AND then later duplicated the problem with a RF 24-240mm lenses and they both exhibited the same inability to focus when using the Canon remote RC-6 and a flash.  However,  no focusing problems happened when I just shot using the usual method of pressing the shutter with the ol' trigger finger and waiting briefly at the half-press to insure focus.  The camera was on a tripod.  ISO (100) and aperture (6.3), 1/250th, and focus position and distance to the subject remained constant. I used at travel flash (Canon 270EX) for all shots.

The first two images below are with the RC-6 triggering the R5 with the RF 24-105mmL and a 270EX. at the above settings.  I had taken multiple shots of people prior to this, enlarged them, checked them, and they were fine.  No reason to check every single shot. Since the exposure was good, and the focus square was precisely where it was supposed to be, I didn't check this group shot.  That was a mistake.  I took 10 shots like this and they all came out like this.  See the first two images below: 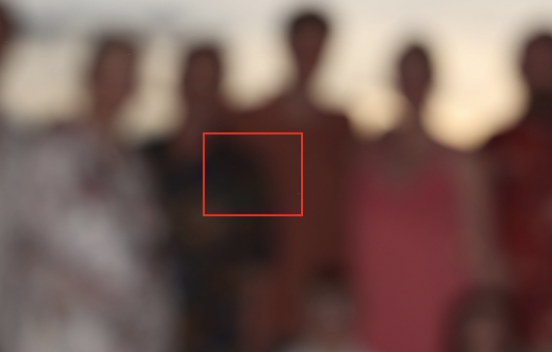 Below, however, is representative of ALL the other shots that I took myself  i.e., without the RC-6 and the R5 on remote trigger setting, using my finger on the shutter button and pressing half down to achieve focus before pressing to take the shot. This was the result: Perfectly in focus.  I took about 50 shots like this (some before and some after the above out of focus group shots, with the RC-6 and remote setting.)  All were perfect.

The only difference then, is the use of the remote RC-6. NOTHING else changed.

So here is my suspicion: there is a bug in the software/firmware that triggers the flash before the lens has focused.  This would also point, on a more global level, to a timing delay possibly with the shutter itself, i.e., a focus-shutter timing problem.

While I appreciate the kind gentlemen Tim's suggestions about taking everyhting off, changing the data cards, etc.,etc., with all due respect, that is a bit of grasping at straws.  When all things remain the same, you isolate the one thing that is different: use of the RC-6 as a remote trigger. That was THE only difference and it isolates the problem.  There may be other issues with other people's usage/equipment used that trigger the same fundamental focus-timing problem, but this was a controlled experiment which isolated and demonstrated one single variable.

BTW, I've been using the RC-6 with a 40D, 5D MKIII and EF lenses for many many years.  Not a single auto-focusing problem.

And since other people are obviously complaining about this same defect, I'd say Canon has a problem.  I'd also suggest that, before anybody sends it in to Canon for a "fix",  Canon needs to identify the problem (and admit there is one), then put out a service notice to all their customers who have the affected cameras, and then detail what the problem is, and request customers to return the cameras to Canon (at Canon's expense) for a prompt repair/upgrade/"fixing."  That's SOP for systemic bugs that are discovered in manufactured products, or with the OS running them, like with any other electronic device.

It's a real shame, but I simply can't trust the R5 now using a Remote Trigger.  I will continue to do ore tests, such as using the self-timer mode and see what happens, and also with 3rd party remotes (such as electronic remotes, rather than the RC-6's IR trigger.). But at this point, that's doing Canon's job for them...

"While I appreciate the kind gentlemen Tim's suggestions about taking everyhting off, changing the data cards, etc.,etc., with all due respect, that is a bit of grasping at straws.

When all things remain the same, you isolate the one thing that is different: use of the RC-6 as a remote trigger. That was THE only difference and it isolates the problem.  There may be other issues with other people's usage/equipment used that trigger the same fundamental focus-timing problem, but this was a controlled experiment which isolated and demonstrated one single variable."

Yes, the problem needs to be isolated, which was the goal of Tim's advice.

Do you have BBF enabled?  More times than not, when the camera does not focus with a remote it is because of BBF.  A remote only controls the shutter.  When AF is removed from the shutter button, then remotes lose the ability to AF..

Thank you for replying with your suggestion.  Do you mean 'Back Button Focus"?  If so, no, I never use back button focus if that was what you meant.

The RC-6 is  a good way to consistently detail a problem that others have complained about with the R5 and focusing issues.  The fact is that the shutter triggers the flash and that pressing the shutter button is supposed to trigger the autofocus before triggering the shutter (which triggers the flash.)  So, regardless of the settings, it should work seemlessly.  Obviously, it doesn't.  Since I've never had the problem with any of the other Canon cameras I've owned/used, the culprit seems to be something within the R5 software/firmware.

If you press the shutter button with your finger, good photography practice dictates a slow steady press to minimize the possibility of "camera jerk" blurring the image.  That "slow and steady" press gives enough time - perhaps - to activate the autofocus and give enough time for the autofocus mechanism to work before the shutter is open and flash goes off.  Even if just a marginal delay, that would electronically give enough time for the camera to focus prior to the shutter/flash going off.  That would explain why the 50 or so photos I took myself came out just fine.  The RC-6, however, triggers the whole process instantaneously, with none of the aforementioned potential for delay.  That would also explain why only the images taken with the RC-6 were completely out of focus.

The R5 manual (advanced) referring to the RC-6  and focusing (pg 455-3) states: "Autofocusing is performed when the focus mode switch is set to "AF"".  No other warnings, caveats, restrictions, limitations, setting requirements, wherefores or whereases are given (other than obvious ones unrelated to settings considerations.)

This problem is unheard of with non-R-series cameras (in my experience using it from about 2003 now, almost 18 years, with a variety of cameras) indicates.  There are issues of of course, with not triggering the shutter at all due to poor angle, light interference, low battery, extreme distance, etc., but not anything to do with focus issues.

Again, I'm requesting that Canon take note of these issues, due the appropriate testing, and issue a fix.  At the very least, if there are some secret "caveats, restrictions, limitations, setting requirements" then TELL US and put it in the darn manual!

"Again, I'm requesting that Canon take note of these issues, due the appropriate testing, and issue a fix.  At the very least, if there are some secret "caveats, restrictions, limitations, setting requirements" then TELL US and put it in the darn manual!"

I strongly recommend that you contact Canon Support directly with your issue.  This is only a user forum.

I do not have an R series camera, so I am not familiar with the possible settings, but for my 1D X Mark III in One Shot AF Single speed the camera will not lire if focus cannot be achieved. It does that in both viewfinder and Live View.

Switching to AI Servo brings up options for firing priority; it is possible in AI Servo for the shutter to fire w/o focus being achieved.

I don't know if those features exist in your camera.