Hello! I hope someone can help. I just purchased a TR8620a printer last week (Black Friday) and it's printing orange instead of pink. I have a Macbook with Ventura OS 13.0.1. I've called both Canon AND Apple to problem-solve for several hours each time. I've done the following: multiple test prints from Mac and iPhone, tried changing the printer color management, uninstalling/reinstalling the printer software AND Mac Ventura OS.

Canon says it's an Apple issue. Apple says it's a Canon issue. Apple said the printer is broken, and to return it for a new one, I just did that...and the new one is STILL printing pink as orange?! (insert ANGRY face!) Red also has an orange tinge as well. Yellows, blues, and blacks print fine. I don't know what to do, except return the printer as broken and/or incompatible with my Mac. Test prints shows the colors are just fine. But not when printed via my Mac or iPhone.

I have also tried to install the printer not using Bonjour, since one solution I found suggested this option; however, I don't see a way to stop my Mac choosing Bonjour automatically. I tried re-adding the Canon printer again as a "new" printer but it defaults to Bonjour. From the drop-down list of software, there is nothing for Canon, just Epson and HP...seriously, Canon?!

I'm concerned I'll have to get an HP printer (ink is prohibitively expensive over time), or Epson (they have software stopping 3rd party ink usage). I really like this printer, so I am loathe to return it if there is a solution that I am missing.

Does anyone have any ideas? I have a small business, so this is really crippling my work. Any solutions would be greatly appreciated. Thanks! 🙂

I just printed the test image I linked to below with Lightroom Classic on Canon Photo paper Plus Platinum photo paper.

What software are you printing from? What paper are you using?

Hi John - Thanks for responding! I read your previous posts last night (and early this morning!) I just printed the test page and all the colors show correctly?! Here's what I'm using:

- White paper: 20lb, 8.5 x 11in (will be printing standard color and b&w documents and occasional photos)

- I have the latest versions of Adobe: Photoshop, Illustrator, InDesign, Acrobat, Bridge and Camera Raw installed on my Mac. I use PS and PDF the most. I just rechecked and Adobe Cloud states that all above apps are updated.

- Just tested pink using MS Word 2021 - prints light pink fine, fuchsia pink comes out orangey (pink is one of my brand colors, so I have to make this work)

I was going to run a malware test, just to make sure I don't have a bug. But your test page disproves that theory.

Could it be Bonjour? I can't seem to add the printer without it defaulting to that setting.

Thanks for troubleshooting with me...had a few tears and have thrown a toddler tantrum...and I am (obviously!) NOT a toddler lol! 🙂

Hi John - I forgot to mention two things: I am not a graphics expert. Just started using Adobe again after a long hiatus. And the test page colors are a little washed out - not as vibrant/deep as the screen. I know this is just a screen vs print issue, but it's a lot less intense. But, true to the colors on screen.

Hi. Even on the best photo paper a print won't look as vivid as the display since one is transmitted light and the other is reflected. Plus, plain white paper won't produce as well as true photo paper.

I ran an additional test I converted the TIFF test image to PDF and printed from Adobe PDF Reader Printed perfectly. Also printed on plain paper; not as vibrant but correct colors.

Here are the settings I used; your media would need to be what you are using. 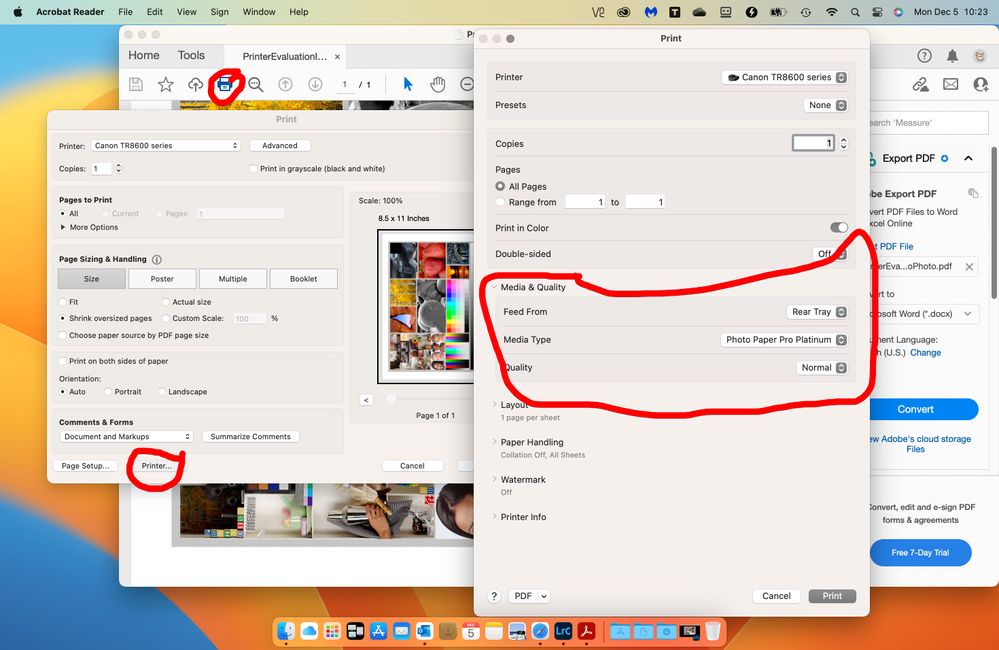 The AirPrint driver is all that is available for this printer. Here is what my printer info looks like in Printers & Scanners: 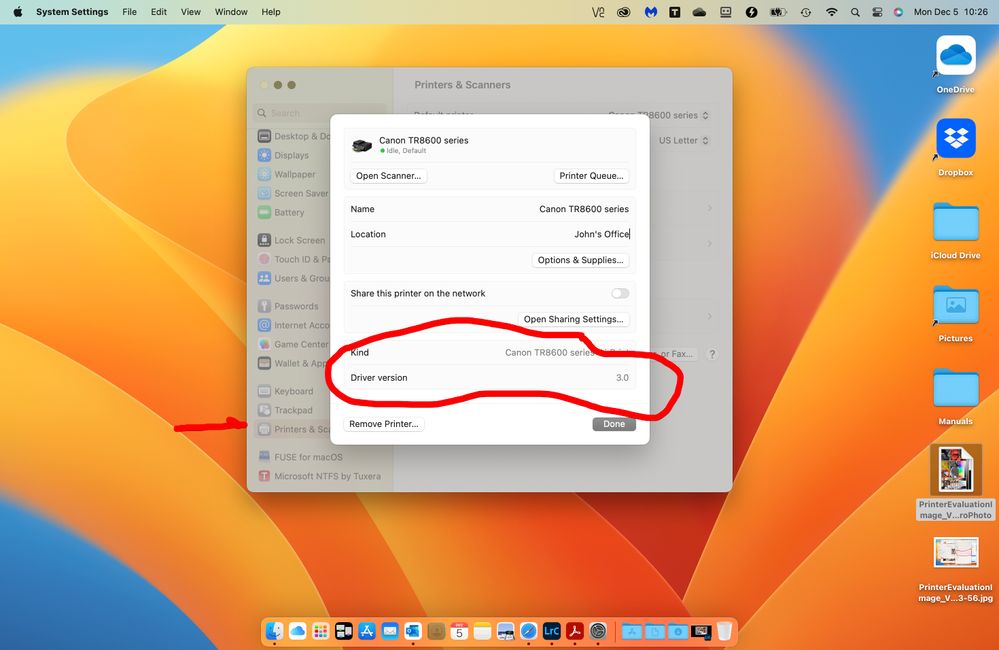 If you can post a link to one of your files that you are having trouble with (or send as a private message) I can see what happens if I print it.

Thanks for the screenshots. My printer settings are the same as yours! I did the same setup for the PDF selecting plain paper instead of Auto Select - still got orange. Then checked my printer in the settings and it is set to the Canon airprint. As you stated, it's the only one that can be selected and it's done automatically. There's no other drivers or versions to choose from in a drop down list.

My next steps: I've just backed up my Mac and will uninstall the printer. Run a malware test - just to be certain I don't have any viruses - then re-add the printer again after rebooting. OMG this is killing my ink and paper! The printer is working beautifully except for the ink - it's so frustrating! I feel like there is a simple solution. I just can't figure out if it's the printer or my Mac!

In the meantime, please look out for 2 PDFs: 1 multicolor and 1 pink/B&W. Both are from my business, so I will send privately. Let me know how you get on. I'm super curious for your results. After that, I need to call Apple.

Hi John - just realized that I can't send you a PDF, it has to be a URL link. I need to figure that out. So, I'll send the file in a little bit. For some reason, I've never had to convert a PDF to web link. So I'm in full on "learning" mode right now!

If you use Dropbox or OneDrive you can select the file to share and the software will create a link.

Okay, I just used Dropbox and sent you the links. Thank you!

All prints looked the same and all prints showed the pink lettering more subdued tending to an orange shade, just as you described.

What software did you use to create the pages? Does that allow printing? I am now out of my knowledge envelope. Maybe the creation software is embedding some sort of color profile tag that the printer is seeing?