430EX does not fire on camera, works well as slave

My 430EX does not fire on camera hot shoe, but seems to work well when I set it to wireless slave flash - any ideas how I could fix it? It is the original model (not II or III), so instead of sending it to service, I'd appreciate any tips on how I could fix it.

I'm very familiar with flashes and I have tried this flash with three different EOS bodies, so the problem is certainly in the flash - all other flashes work well. Foot contacts are clean and every contact and pin seems to function mechanically just as they should. All flash functions are working ok as wireless slave, but he flash just does not fire once it is placed to the camera hot shoe. I opened the bottom of the flash to see if there was a bad contact or something else obvious, but wires to foot contacts seem to be well soldered and connector to flash mainboard is solidly secured (you should not open flashes - I'm well aware of the dangers). Is there a fuse I could easily check? Any other ideas?

That is some very clean work.  It reminds of way back when, when I worked on very high powered radar installations.  Actually, the proper term would be LIDAR, as the systems were laser based.  But, we did have a radio signal based system to use as a standard reference.  [ to the lay people, this means is the new tech stuff actually working like the old tech stuff ]

I used to work on some VERY high powered radar systems that could reach out to low Earth orbit,  These main output stages of these systems used vacuum tubes the size of basketballs, which were water cooled inside of vessels that resembled water heaters.

I wish I had photos of this stuff, but all of it was highly classified technology, so I cannot give you any dates when this stuff was actually in service.  It is safe to say, though, Tektronix space heaters ruled!

High power RF gear is very interesting.  I took my daughter to visit Fermi lab when she was 10 and we got the inside tour of the ring from a friend who works there.  The RF generators use tubes that were shipped in refrigerator sized packing crates.  She told me later that was far better than any of her school field trips.

The big Tektronix tube type scopes really do generate some heat.  I restored a Type 555 which is a true dual beam scope with twin gun assemblies in the CRT.  It and its external power supply each have their own large cooling fans and reside on their official Tektronix Scope Mobile cart.  I believe that it draws close to 15 amps in operation.  Although it still works perfectly, not surprisingly since Tektronix design and construction quality are both works of art, I primarily use a pair of slightly newer solid state Tektronix 7854 scopes on the bench.  They are hybrids providing both standard analog operation along with a digitizer with both recursive and one shot capture allowing waveform analysis and storage. The Tektronix high voltage probe in the last photo allows safe measurements of waveforms up to 40,000 volts and keeps the operator at a safe distance from the measurement point.

And for anyone who complains that it can be tedious dialing in a Canon lens with the micro focus adjustment, they should try aligning the delay line on a vintage Tektronix scope.  These delay lines consist of a large series of adjustable inductor/capacitor pairs and provide a very slight delay between the trigger pickoff point and the distributed vertical amplifier so that the scope can display the actual event that triggered the timebase.  The trick is providing this slight delay without altering the original waveform and proper alignment usually requires at least 5 complete trips through the entire line; the adjustment holes for the delay line are visible in the interior shot and reside in the L shaped covers around the outside area of the scope frame.  Since it is a true dual beam scope it has a separate delay line for each channel so there is a duplicate on the other side of the scope providing for twice the "fun" during calibration 🙂 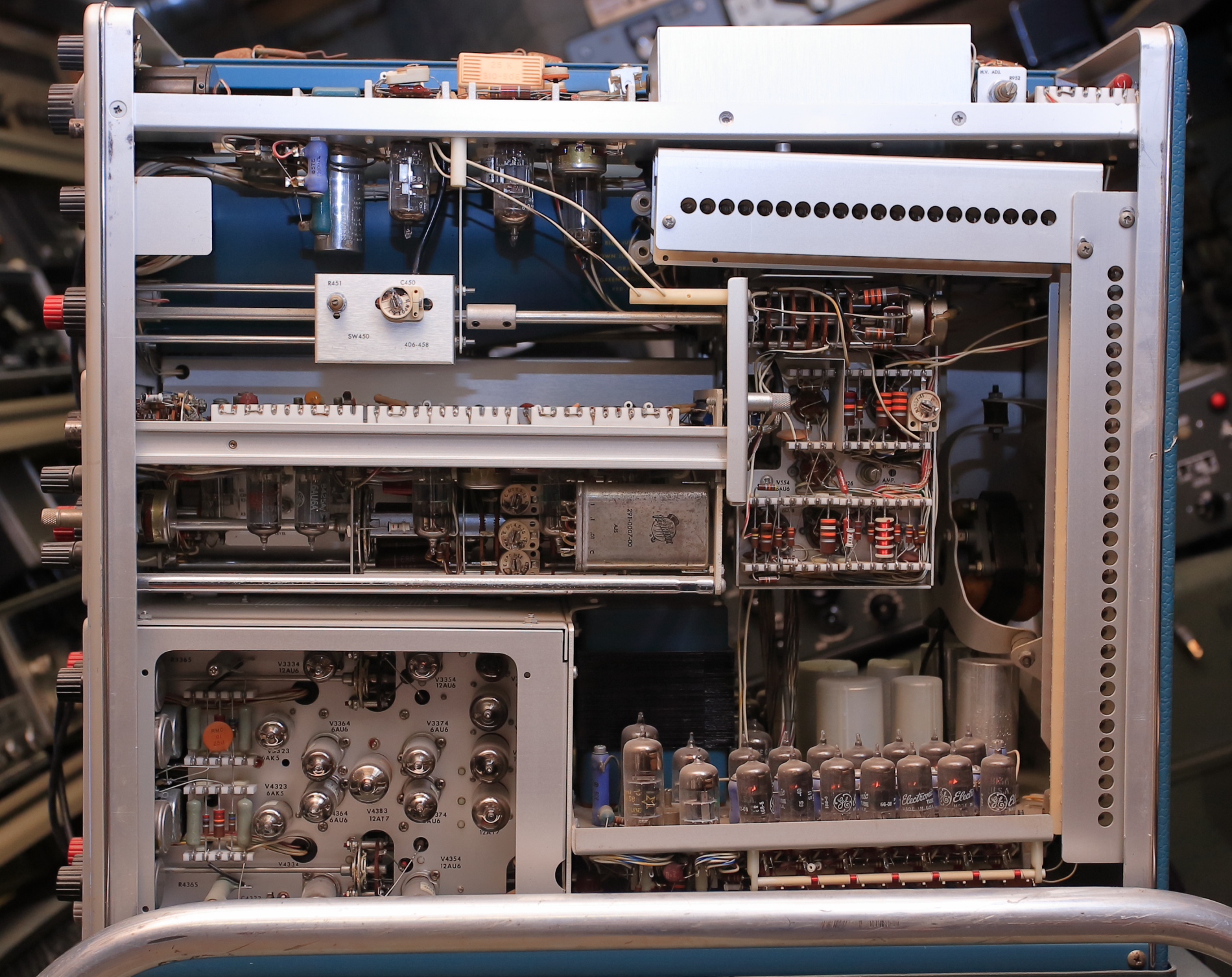 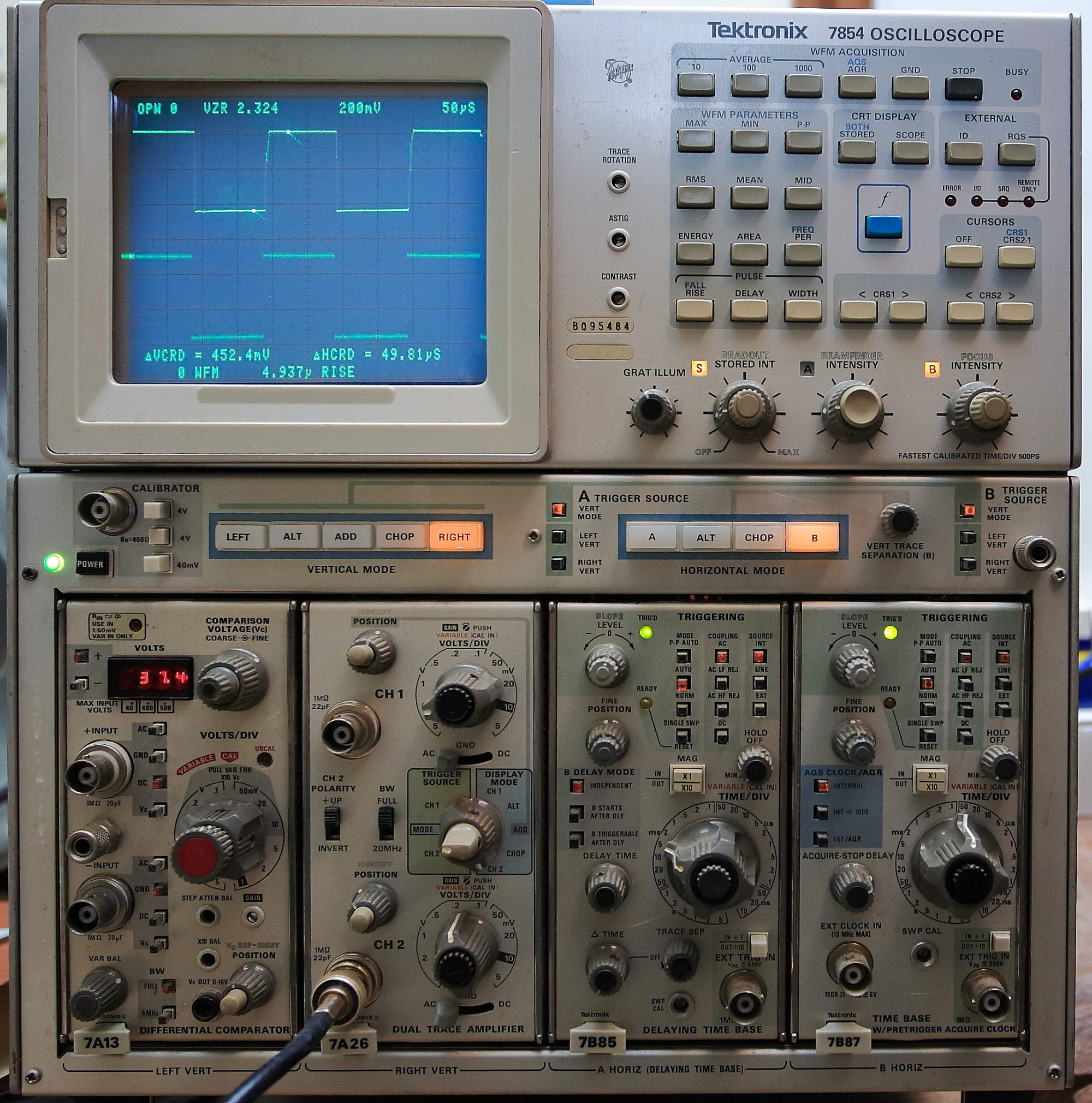 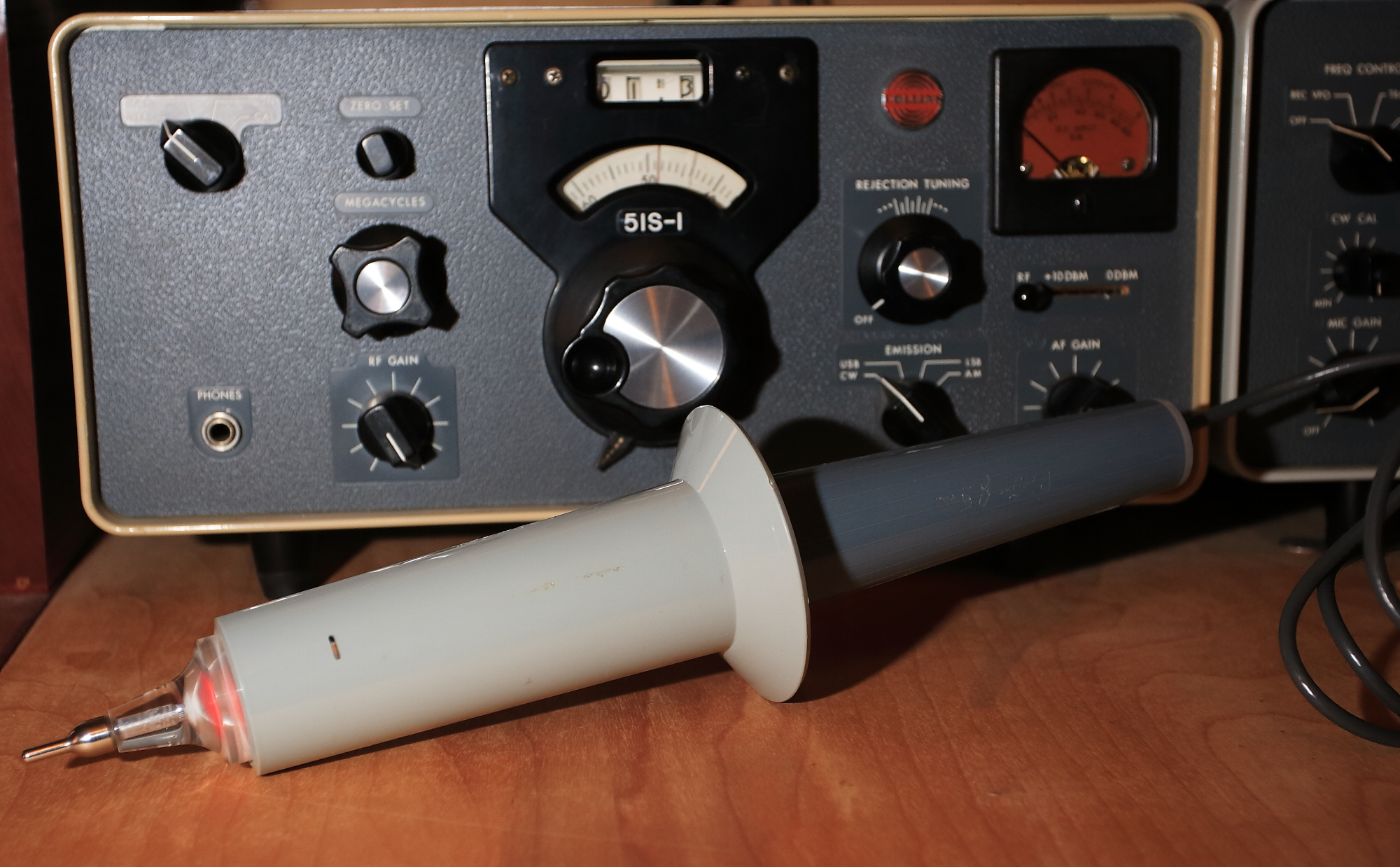