430EX does not fire on camera, works well as slave

My 430EX does not fire on camera hot shoe, but seems to work well when I set it to wireless slave flash - any ideas how I could fix it? It is the original model (not II or III), so instead of sending it to service, I'd appreciate any tips on how I could fix it.

I'm very familiar with flashes and I have tried this flash with three different EOS bodies, so the problem is certainly in the flash - all other flashes work well. Foot contacts are clean and every contact and pin seems to function mechanically just as they should. All flash functions are working ok as wireless slave, but he flash just does not fire once it is placed to the camera hot shoe. I opened the bottom of the flash to see if there was a bad contact or something else obvious, but wires to foot contacts seem to be well soldered and connector to flash mainboard is solidly secured (you should not open flashes - I'm well aware of the dangers). Is there a fuse I could easily check? Any other ideas?

A fuse would keep it working in wireless mode, too. Sounds like some obscure problem with the flash.

Is the flash otherwise communicating with the camera when mounted to the hot shoe (i.e. follows zoom lens info)?

If it is otherwise communicating, the flash trigger contact is the contact that sits by itself corresponding to the large contact on the camera hot shoe but beyond tracing through that sector of the circuit you won't have a lot to go on.  I doubt whether Canon released a schematic to their authorized repair facilities since these types of units would be repaired at the module/assembly rather than component level.

I am glad it is working for you and hopefully it continues its good behavior.  I wonder how the slave/master switch functions on this flash and if the trigger line from the hot shoe is disabled when in the slave position?  If so, it could be a switch contact that caused the issue and if it happens again try cycling that control switch several times.

I mostly use Hensel studio strobes now and rarely use my speedlites, the only time I had one open was to replace a damaged base on my 580EX several years ago and I can't remember how well the controls are sealed against moisture/dust but I suspect not that well.

That's a good point. I think I'll disassemble the foot once again, just for measuring the contacts and spraying a tiny bit of contact cleaner to the switch as well. I'd say the internal build quality seemed to be good, but there was no special sealing so dirt/dust (oxidation?) might get into the contacts and switches. Considering this is an old hobby grade flash, the build quality is still more than sufficient.

Once again: you should not disassemble flashes - there are high voltage components that can be hazardous.

Your warning is VERY important because the storage caps on even these small camera mounted flashes store a significant amount of power and just removing the batteries won't result in rapidly bleeding the charge.  In the case of a defective flash, it is possible for a good quality storage capacitor to maintain a significant charge for many days before self-discharging through internal leakage in the electrolytic capacitors.  Also use caution if you decide to discharge the cap because directly shorting across a charged cap creates a very high current discharge that can damage the capacitor (and other components if you short downstream from the cap).

I regular restore vintage amateur radio gear with power supplies developing several thousand volts that can source close to an amp or more of current for sustained periods of time and I am safety conscious because at these levels you likely won't get a second chance after a mistake. But people not familiar with how flash tubes work don't realize that the inverter powered by those little AA batteries will charge the storage capacitor(s) to a significantly high voltage and these caps can source a very high short term current discharge.

Not only that, but for some flashes the trigger voltage shows up on the hot shoe, where it is shorted by the camera to trigger the flash. So the high voltage is not confined to the "high voltage section." Probably not the case for an ETTL flash, but something to note.

Friend of mine once tried to repair a built-in flash in older EOS camera body. He did not know exactly what he was doing and got a shock from the capacitator in that tiny flash. He told it hurt a lot, he got a small burn mark and he had irregular hearbeat for several days. And that was a tiny built-in flash, not a bigger hot shoe mounted one. Was it one of those, he might not be here.

Your friend was lucky!  A small shock is painful while a higher current, below the level needed to cause severe burns, will stop the heart but if it restarts it will be in sync.  The intermediate level shock like your friend received is actually the most dangerous because it breaks up the normal rhythm of the heart muscle unlike the higher current shock which temporarily freezes it.

This was the initial mechanical layout of the power supply section of a legal limit RF amplifier I built around 15 years ago.  The filter for the high voltage power supply consists of eight 7.1 uf 5 Kv rated oil filled capacitors in parallel and in operation they are charged to around 2,500 volts.  These oil impregnated capacitors, unlike the electrolytic capacitors used in most photo flash systems, have extremely low self leakage and they are shipped and stored with a shorting wire across the terminals to prevent them from gradually building up a dangerous charge from static electricity. 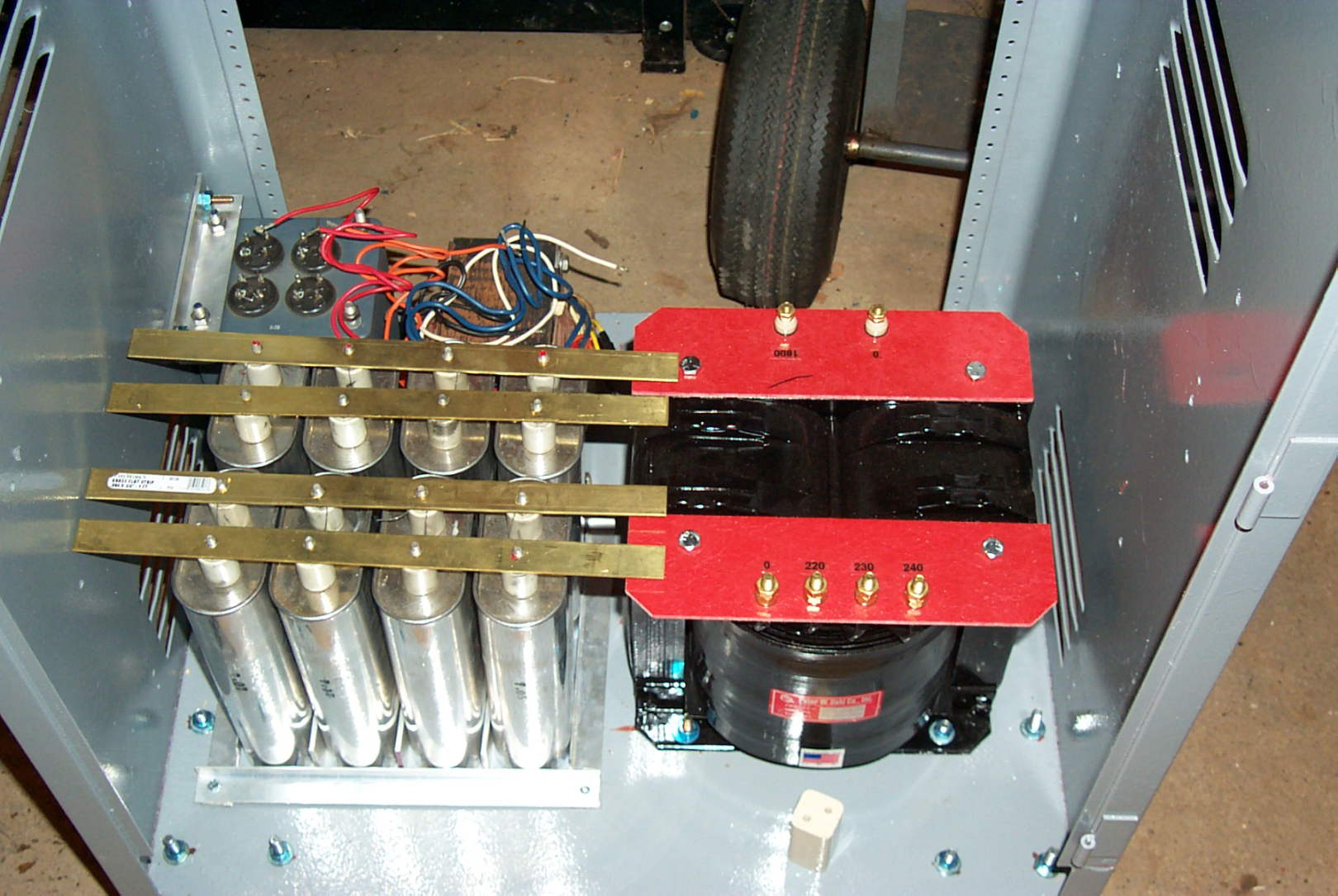