@Priya wrote:
After showing full charge.. I put the battery in the camera but it shows only 2 bars.. What doea it mean??

Or a bad charger.

Did they change it on the T4i?  All my Canons have always had 3 or 4 bars in the indicator.  And it's not linear in the least.  By the time it's on it's last bar mine have always meant "change me, or I'm going to die in the middle of you shooting something".

Interesting.  That's odd they'd do that.  I think it's safe to say that it's not calibrated in the least.  And, it will slowly change as your battery life winds down.  My guess would be that by the time it gets to the second (last) bar that it's much less than half.  I wouldn't stress it, you'll learn how to interpret the indicator through use.

I'm checking the diagram for your camera.  The battery status should appear in the upper left corner of the rear LCD.

On a fully charged battery you should see a battery icon with three blocks inside. One is larger than the other two and should be the first to disappear as the battery drains.  It appears to represent "roughly" half the battery power.  The other two are smaller.

My bodies (I don't have a T4i) have 4 blocks inside the battery icon to "roughly" show each 25% of capacity.

If you're pushing it to the last block of power then you'd want to make sure you have a spare battery charged and ready to go.  You might also want to invest in a battery grip (which holds two batteries).  This not only doubles your capacity, but it also makes the camera a lot more comfortable to grip and repeats several key controls when shooting vertically.

my indicator is lwr left. thanks for the advice
0 Likes
Share
Reply
Go to solution 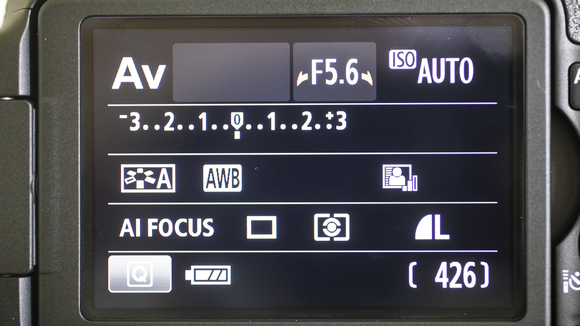 I am older so my eyes are probably shot, I only see 2 lines. I haven't had my eyes checked lately tho. as least it looks like the indicator is on the lwr left.
0 Likes
Share
Reply
Go to solution

After showing full charge.. I put the battery in the camera but it shows only 2 bars.. What doea it mean??
0 Likes
Share
Reply
Go to solution

@Priya wrote:
After showing full charge.. I put the battery in the camera but it shows only 2 bars.. What doea it mean??