The heat from a Canon LP-E6N battery interferes with the sensor during minutes- to hours-long exposures, its thermal radiation causing ill-effects which ruin photographs of deep-space objects.  I’ve encountered this following exposure in as little as 8 minutes, and durations as long as 4.3 hours: I’ve eliminated all sources of light as the cause [producing identical results from taking photos inside a dark, cold (20°F) closet, lens cap on, an opaque black bag over the camera and lens, with exposures of as little as 10 minutes duration].

I observed a professional astronomer utilize a brand-x camera while taking long-duration astrophotographs of deep-space objects, using an external DC-power source to power his camera in place of the normal internal (lithium ion) camera battery: the battery is much like Canon’s DC Coupler DR-E6 and AC-E6N AC Adapter — except that instead of using an AC power source, the battery connected to another battery through a USB port, providing DC-to-DC power.

Using Canon’s DR-E6 and AC-E6N, while photographing at high altitude and sub-zero ambient temperatures, I’ll be forced to connect to an external AC source such as a generator or a large battery: (1) I will lose significant power utilizing a lithium battery at low temps; (2) I will lose 30-40% power converting the large lithium battery DC-to-AC using an inverter; then (3) I will lose another 40% of the power converting AC-to-DC through the use of the transformer-rectifier. My source of power must be available for 4-5 hours to power the camera for long-duration exposures, or taking hundreds of photos (each 5+ minutes’ duration): temperature-affected poor battery performance and connection losses make that questionable, perhaps impossible.

Most small generators will not provide AC power for that long a period at altitudes in excess of 12,000’ without refueling (neither gasoline or propane-powered generators have a 4-5 hour endurance); and the power provided by many small generators at high altitude is much too inconsistent for use with electronics without adverse signal-to-noise ratios. Larger inverter generators have ample gas tanks and clean power, but they weigh nearly 100 pounds and are not easily transported over rough terrain.

I’m left with the option of looking for an after-market battery for use in my EOS 6D or 6D Mk II, one that connects to a DC power source through a USB cable. Does anyone know of such a DC-to-DC battery compatible with the 6D/6D Mk II?

If it is indeed thermal radiation, you can try wrapping it in aluminum foil to reduce its emissivity.

It’s a thought, but in my experience, nothing catastrophic has ever happened putting metallic foil in tight spaces in close proximity to vital electrical contacts.  Yanno?  Except when I do it...

The one variable I haven’t explored is whether a Canon battery grip would cause this same effect on the sensor platform.  No one knows. 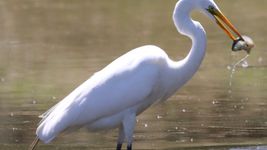 The one variable I haven’t explored is whether a Canon battery grip would cause this same effect on the sensor platform.  No one knows.

A battery grip might work for you as the batteries are further removed form the camera.  The way the grip works is it switches between the two batteries but don't know if it would do that during a long exposure.

BTW another solution might be modifying a car LP-E6N charger to power the camera.  I havent thought a lot about it but there may also be a way to use remote batteries to provide the 7.2 volts provided by the LP-E6N.  I know the camera is picky about what is in the battery slot, but a mod of a AC power adapter might be possable.

Also there is a "

Avaible through Adorama that may be usefull.  There is also a

available from Amazon that can be powered from a USB power bank,

Thank you for the suggestion.

I asked someone about using a splice into an existing piece of Canon DC gear: a splice will decrease line voltage and increase resistance (minimal in a low-voltage system, but still, it’s there). Soldering it will decrease the effects, but it will still change performance.

I’m very reluctant to risk cumulative damage to the camera’s electronics, or to do something that might introduce unwanted noise into the collected data stream. In the latter case, it’s difficult to obtain the photos with a lot of expense and hard work involved: nothing is worse than finding out that everything you did was worthless.

DC to DC converters are the most efficient means for reducing DC voltage but they are electrically noisy and expensive.  Simple three terminal linear regulators to handle the current needed and to regulate a vehicle nominal 12 volt source to the 8 volts that the Canon DC coupler wants are inexpensive but they will waste around 12 watts of power at the maximum rated current draw of the DC coupler (although it should be considerably less most of the time).

If you are thinking about building your own circuit to provide the regulated input to the Canon DR-E6 coupler, I would use a TI LM338 5 amp rated adjustable positive voltage regulator  TI's application notes for the device specifiy the calculation of the two resistors needed to set the desired regulated output voltage along with the input and output capacitors needed for stability and the heat sink required to keep the device at a safe operating temperature.  Total cost for all parts should be  under $20, considerably less if you buy the heat sink from one of the many electronics surplus dealers.

Again, if you are thinking about doing this grab the application notes for the LM338 from TI's website. Be careful if you are considering the DC to DC converter route, these are high efficiency switching type regulators that are fairly complex and develop a lot of noise which could well create artifacts in the camera data stream if not well filtered.  And unlike the highly reliable three terminal regulators (like the LM338) which has had a stable and tested design for decades, there is a lot of "junk" in the DC to DC regulator world and I wouldn't trust a camera or anything else important to one that isn't well tested and the quality units make Canon OEM batteries look very cheap by comparison.

I am having the exact same problem. There must be a dummy battery for the D6 to USB to DC power supply. Did you find one as to this date?

I am having the exact same problem. There must be a dummy battery for the D6 to USB to DC power supply. Did you find one as to this date?

The only solution thus far that I've found is Canon's AC-E6N AC Adapter and DR-E6 (or DR-E18) DC Coupler.  It's intended only for indoor use with an AC power source: my inquiry came as a result of configuring a telescope with a mounted EOS 6D or 6D2 cameras, to be operated in remote sites and powered by either a dual-fuel inverter-equipped generator (directly) or through a 1100/1500-watt lithium-ion battery, itself charged by the generator or 2-100 watt solar panels.

Ideally, if I could power the camera's power supply through one of the two DC-power sources, I wouldn't lose power through the DC-AC-DC transfer [battery/generator-inverter to (AC-E6N AC Adapter and DR-E6) to camera battery].  The EOS R can be recharged through use of a USB cable — perhaps even operated while powered by the USB cable — but Canon must not believe that a remote power requirement could exist where a battery grip, spare batteries, or vehicle-connected battery recharging unit would be inadequate.  My power requirements, operating cameras and telescope at high altitude for extended periods (3-4 weeks), create a logistical nightmare even with 2 generators, solar panels, and 4 large lithium-ion batteries.

There are a variety of power bank/battery boxes available that take multiple 18650 rechargeable Li-ion cells, all of these have a USB output, some of them have a built in DC-DC converter that will supply a variable output to a standard power socket.

Usually the output is variable from 8 to 12V sometimes to 24V.

Although your battery is marked 7.2V that is the nominal voltage and you will actually need 8V to run your camera (it will have 8V printed on the serial number label on the base), most Canon DSLRs have an internal voltage regulator with a maximum input of about 11V although in the interest of heat generation it is better to keep to 8V.