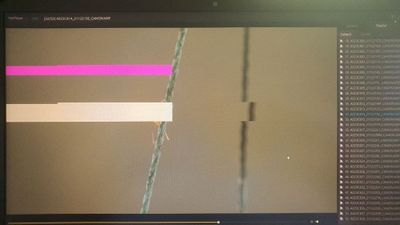 This glitch occurs consistently in the same place when viewing the files directly from the memory card as well as after backing up onto a drive, so it's not the result of faulty file transfer.

These are the camera settings:

When I recorded the footage the firmware was still 1.0.1.1.

Any idea what this purple white glitch is about?

Would love to hear from you!

Happy new year.  Whatever that is, its not related to your camera's firmware.  Have you tried capture with a different memory card?

What is that you are shooting?

It looks like hair, yarn or fibers of some kind.  These aren't on the lens or near the image image sensor, are they? Hair normally looks black on the sensor.  You need to tell us more.

thanks for your input  - I will try switching up the cards and hope for the best. I take your word it's not a firmware issue - why do you rule that out btw?

Just filming a piece of string with an ant crawling up it. The white/purple frame glitch happens while filming other stuff, too - leaning towards it being some kind of file corruption issue. It doesn't happen all the time but it's painful enough. Captured a beautiful sequence yesterday and unfortunately some of the highlights were corrupted by that white purple streak - it hurts!

My guess is file corruption.  Did you happen to capture your footage to two cards (simultaneous record)?

What cards are you using? Since you're using the 410 Mbps codec, are you at least using V60 rated cards (I would recommend though using V90 rated cards)?  I've been using Angelbird V90 cards with my EOS C70 and have not seen this issue.   Different cam of course, but the same sensor and I use the same codec as you're using.   Only differences are that I set the system frequency to 24 Hz and capture true 24 fps.  And also set it to record DCI-4K.   I would doubt though that the system frequency or recording in DCI-4K vs UHD would cause such glitches though.

thanks for the input - really appreciate it. I am also leaning towards file corruption. I am using SanDisk Extreme Pro CFexpress cards / Read  1700 MB/s / write 1400 MB/s. I'll try switching up the cards to see if the issue is caused by a specific card - I really hope that's the case and it's not due to the camera. Also will try simultaneous record and see if that brings answers.