I'm probably doing something obviously wrong, but what I thought was 120 fps (slow and fast motion menu) from my new C70 is showing as 60 fps in Premiere.

Here are screenshots from the camera and from the clip I imported into Premiere.

Thank you for your time! 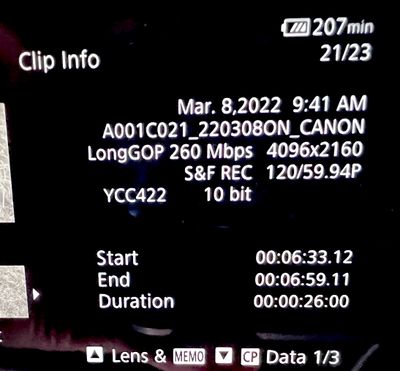 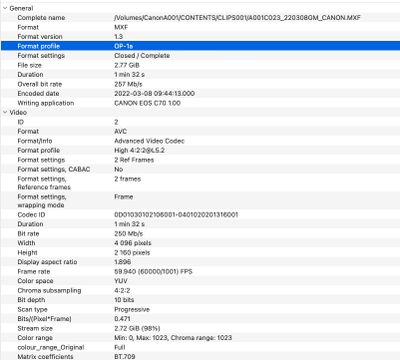 I don't use Primiere, but if it's like Final Cut Pro, you'd choose the framerate to use for your project and then drop in clips.  e.g. for a particular project, I may set it to be 24 fps.  Then, each second of 120 fps footage would then take 5 seconds of the timeline in the 24 fps project.   Having said all that, I think the display of clip metadata can depend upon what properties you are viewing.   i.e. perhaps the fps value is not the actual value from the individual clip, but taken from the project's settings?

So for your project's output fps, did you set it to a value of 60? If so, perhaps that is why it's showing as 60 (assuming that Premiere may be showing info as it relates to the project itself).

I think you're right, because when I switched the main frame rate to 30, my video looked like clean slo mo in Premiere---though the frame rate says 30---not the shooting frame rate...120.

Good news is that everything's fine. You're just not used to the complexities of Slow&Fast mode -- and I don't blame you. 😉

Slow&Fast is different to just shooting at high speed. If I shoot high speed, say 59.94 FPS, then the camera captures 59.94 frames per second, and stores them in a file; then it sets the metadata in that file to say "Frame Rate: 59.94". Then everything's easy.

In Slow&Fast mode, it's different. The camera shoots at one frame rate, but sets the meta-data in the file to a different frame rate -- in effect, the file's meta-data is lying about how fast the footage was shot.

What this boils down to is that the camera shoots at one speed -- say 120 -- but the file is tagged with a different speed -- say 60. So when you play the file, it plays at 60, because this is what the player thinks the file was shot at. But it was actually shot at 120, so you'll see it play at half speed. So it's automatically slowed down for you; which is why this mode is called Slow&Fast.

The display in the camera shows both speeds. See my attached screen shot. "Frame Rate" is set to 23.98, which is what the file will be tagged with; but "Slow&Fast Frame Rate" is set to 72, which is how fast it will actually shoot. This is displayed as "72/23.98". In your case, the screen shot shows that you set it to record 120 frames per second, but tag the file as 59.94.

Remember that the frame rate saved in the meta-data is just an advisory to the player; you can ignore it and set your own playback speed. Effectively, there's no point in setting "Frame Rate" to anything unusual, because you can ignore it and set the playback speed to anything you like when you edit. You won't want to have it play back at less than 24, though, or it will look jerky.

In Premiere, do this with the "Speed/Duration" setting. Do NOT use "Interpret Footage"; it seems like just the right thing, but it was not designed for this, and it doesn't work properly. It will break proxies, speed ramping, and other things.

Personally, if I'm shooting for a 30 FPS timeline (I assume you mean 29.97, but let's say 30 for simplicity), I would set the camera's frame rate to 30 FPS.  I don't see any benefit to shooting 60, and it will force you to use a shorter shutter speed, which makes things harder in low light.

Then, if I want 2x slow-mo, I would simply set the camera's frame rate to 60 (no Slow&Fast).  Then in Premiere, use Speed/Duration to set the playback speed to 50%.

If I want 4x slow-mo, I'm forced to use Slow&Fast, because that's how the camera works.  So I would set the base frame rate to 30, and Slow&Fast to 120.  Then I don't even need to use Speed/Duration, because that will automatically play at 1/4 the speed it was shot.

As for doing all this with 1 click -- no way that I know.  The C70 doesn't have custom settings like the R5.  You can save settings to an SD card, but that's way more clicks than just changing the frame rates.

Thanks again, Atticus. I hear ya. I sometimes forget that the beautiful footage gotten from a cinema camera might be at the (affordable) cost of not being able to click for 30 (29.7), click for 60 (59.), click for 120, multiple one-push settings. I have that in my GH5 workflow; it's a cool thing. But the footage from the C70 makes the inconvenience of changing frame rates (under 15 seconds?) worth it.