Auto-suggest helps you quickly narrow down your search results by suggesting possible matches as you type.
Showing results for
Search instead for
Do you mean
Reply
Topic Options
PO
Occasional Contributor

Oh, I just found the link which has very clear pictures and steps on how to dismentle the S100. https://www.ifixit.com/Guide/Canon+PowerShot+S100+Top+Panel+Replacement/40324

1. Devise a system for keeping track of the screws. There are a lot of them, and they are not all the same. Consider having a pill container -- the kind with a compartment for each day of the month -- and keeping a log of where each screw came from. I know that sounds like "over-kill" but there are so many screws of slightly different lengths and slightly different heads. consider correllating each screw with a log of your disassembly steps.

2. Be sure you have the right size tools. Tiny phillips head screw driver, fine needle-nose pliers, tweezers. There are some very fragile parts. I would not use pliers (or anything metal) on any of the flexible printed circuit ribbons.

3. The only inherently tricky step is reconnecting the main connector. It is delicate, but must be firmly seated. I might help to take a photo of it before separating it, to record depth. At least take a close look.

Add me to the list.  Shutter button stopped working about six months ago for my wife.  I just did the usual things like reset etc and found this thread.  Very sad...not very many pics on this model as my wife relies on me to do the photography.  But it's still a good quality camera with excellent video but now will be recycled.

This was my second Canon that I loved and will be my last.  My SLRs have been Sony since the a55 and I guess our pocket cameras need to be as well.  Such a simple thing to keep customers, but clearly no one is listening.

I brought Panasonic LX100 after my Canon broken and unable to fix it. I threw away.

I found a workaround that I didn't see mentioned here.  I'd much rather a fully working camera (hey Canon!) but this will keep us going.  You can install CHDK using the quick install instructions here:

Once installed, you can copy the code below in to a text file with .lua at the end, and place it in the scripts folder within the CHDK folder on your camera's memory card.  Using the CHDK menu, you can load the script and set it to run automatically when the camera turns on.  Turn the camera off and back on and the script runs.

This works well enough for us to continue to use our S100...code is below.  I just learned a bit of lua to modify the code found here in order ot get it working on the s100.

I couldn't get CHDK to recognize the video button on my S100 so I shifted to use the half-shutter button, which feels more natural anyway.  The code turns the camera into "shoot" mode to start (so the lens is extended), that's what the set_record(1) does.  It then waits until the half-shutter button is pressed.  When it is to executes all of the steps to take a picture, including focusing, and then shoots a single picture.  It then loops back (infintely) so that you can take another photo.  As mentioned above, to take video or do anything else you need to exit the script by pressing the play button.

wow that is impressive - keep going. One day we don't need these manufacturers any more and built our own sturdy cameras that will last.

However too late for me unfortunately - I guess I ruined the camera when I was trying to replace this eletronic part...

So I chime in with the same problem.

Since the spare part is not available any more - did anyone find a source for electronic switch itself? Or any spare part of a different camera model, that has the same type of switch?

I have the equipment and I can solder. So I think I will be able to replace it, if a fitting part can be obtained.

You may be able to get a camera on ebay that you can strip for parts. Working but worn ones seem to go in the  $50 - $60. range -- I see one now listed as "buy it now" for about $55. The other problem common to these cameras is for the lens to get stuck in the out position. Canon made good on these for awhile, but probably no more. If you are looking for a shutter switch a camera with a lens problem might work out for you. But the safest would be to get one that is fully functional if a bit battered. Good luck.

I agree, I never had an S100 but I saw one on ebay, working, with a Canon waterproof case for $100 so I bought it for use at the beach. I've had it for 2 years now with no problems. If you are so inclined to fix them I believe I saw info in this very. very long thread on how to do it and where to get parts with auction sites as an option too for parts. 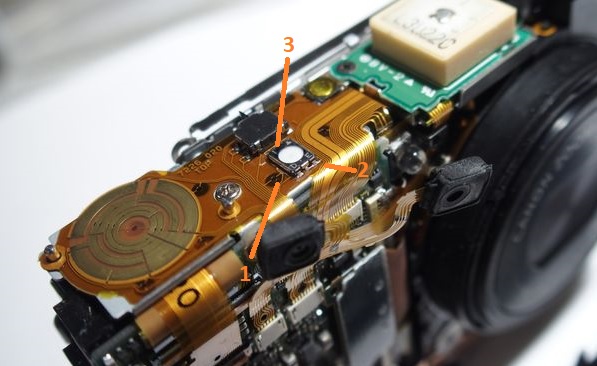 My camera is working now

As a side note: Before I’ve fixed the problem, I've tried to shut a photo with the camera case disassembled. When I pressed the release button, I could not trigger my camera, same way as all S100 owners in this discussion. Nevertheless, when I was pressing the trigger button and I pressed the flex ribbon in a place close to the button and marked as 1, then a picture was capture. I’ve done this few times, and it has always triggered my camera. I assume that pressing the ribbon distorted the broken solder in some way and the proper connection was back. I’ve probed the pads of the release button with camera switched on. When the second stage of the button was pressed and released then the pad most to the left was switching between hi and 0V states. Therefore, I assume it is the faulty pad.

I think that mounting the release button on flex ribbon was not the best choice that engineers from Canon could have made. It is pressed many times and solders are not meant to handle such stress. A proper PCB should be used here.