Auto-suggest helps you quickly narrow down your search results by suggesting possible matches as you type.
Showing results for
Search instead for
Do you mean
Reply
Topic Options
Sam_12156
New Contributor

MFDrivers refuse to find MF8350cdn printer, windows has no problem seeing it.

I have a windows 10 pro (Version 20H2 OS Build 19042.572) desktop computer that used to be able to connect to the mf8350 printer until i reinstalled and updated windows. I tried reinstalling the driver but it tells me it can not find the printer on the network even with searching by IP address. 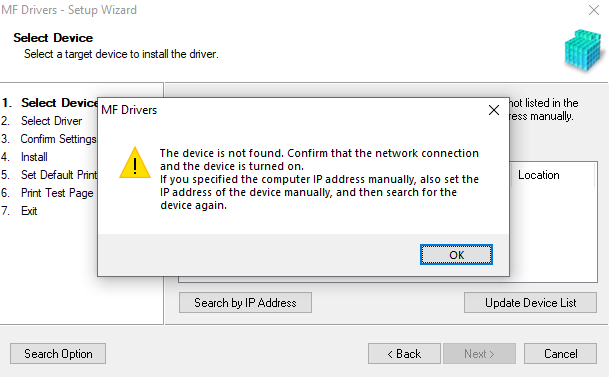 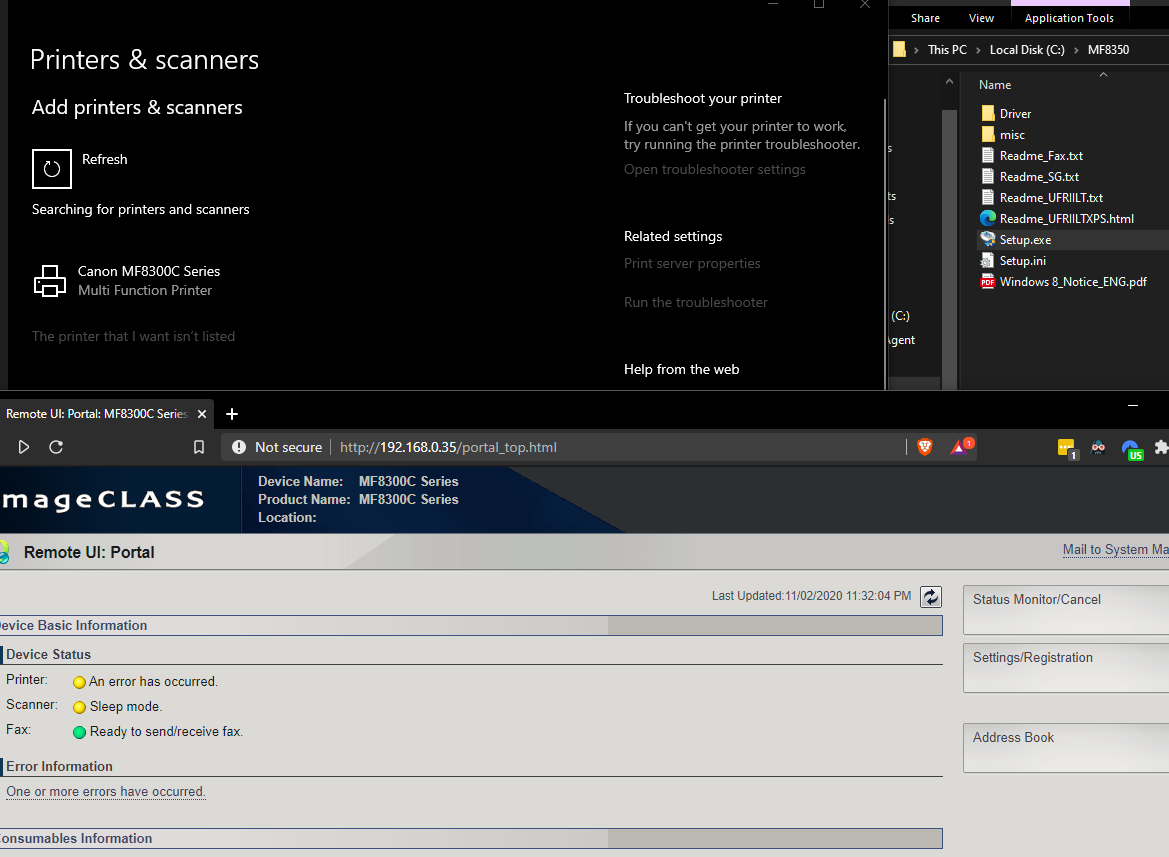 I've tried some solutions i saw on the forums but they didnt work for me, I've added an exemption to window's firewall for the executable but have also tried turning off the firewall and antivirus entirely. I've tried going into msconfig, disabling all non-microsoft services and startup items then rebooting.I've tried moving the driver installer to the root directory of C: and running it with admin privileges.

i've tried safemode with networking and it still wasnt able to find the printer.

At this point i'm running on the assumption that maybe something in the newer version of windows 10 breaks the installer (i have tried compatibility mode as windows 7 and windows 8 to no avail). Im thinking of trying to install the printer on an older version of windows 10 on another drive and seeing if it works there. it already works now under ubuntu.

Im hoping thats not the solution as that would require me to wipe my windows install. fresh install an older version of windows, install printer, then update windows and hope the printer still works. i'd then have to reinstall and reconfigure everything else again

I have installed windows 10 1809 on another harddrive and tried to install the drivers but ran into the same error. i borrowed a laptop, a dell inspiron 3147, running the newest windows 10 and it couldnt find the printer with the driver either. i'm baffled, Mac OS, Ubuntu, Android all are able to install and print from this printer on the same network but i cant get one windows pc to work.

Have you verified the IP address of the printer?

Can you PING it?

Start by confirming that.

If yours does as well, something else is blocking communication.

yes i have verified the printer's ip-address as 192.168.0.35. its listed on my router's attached devices, the printers settings and its the same ipaddress my phone successfully prints to.

Pinging the printer is successful

I ran the driver's installer with an exemption in the firewall but i have tried it with both the windows defender firewall and defender antivirus turned off entirely to no avail.

Im not sure what the port setting for the printer is, it doesnt show on my pc as its not installed so i can't right click properties on it in "devices and printers". is it a setting on the printer itself?

I have also tried this booting into an older version of windows 10 (1809) and on a dell 3147 laptop on the same network and still cant connect. i have devices running macos, ubuntu, android all able to print. just cant get it to work on windows.

Ok so before i reinstalled windows i copied and pasted the contents of my C: partition incase there was some obscure save file for a video game i missed. it wasnt a complete backup, some files couldnt be moved for permission reasons or wierd file names so i figured it would just blue screen if i tried to boot into it. i installed windows on another drive already so i just wiped its C: partition and pasted the contents of my incomplete backup and it was able to boot up.

It was glitchy and the start button and settings app were'nt functional but it was working well enough for me to export the printer in windows printer manegment, then boot back into my main install and import it there. IT WORKS, IT PRINTS, finally!!! I mean i still was never able to get the MFdriver installer to work but this way i can install the drivers without it.

Still i wonder why the driver installer wont work.