So I've had my t3i for a while and I think I'm hitting the limitations in the t3i in terms of what I'm doing now. I've had the camera for about 1-2 years (was given to me as a xmas gift) and up until now, I've done automotive photography, nature photography, as well as portrait photography. I thought that the T3i was already a good enough camera for me to suit my needs but I realized I might need more now but I'm not sure. One night, I was doing rolling shots with a few buddies of mine and noticed in post processing, that there was a ton of grain in most of the pictures if I turned up the shadows (was shooting in betwen 1/10-1/20th of a second at F8.0 at 3200ISO. What are the benefits of upgrading from a T3i or do I just need a better lens? I was thinking of going to either a T4i or a T5i but at the same time, I want to go for a full frame sensored camera but I don't know if the types of photography I'm doing right now require such an advanced camera such as the 5D MkII  or if the t4i/t5i will be good enough. Also, do the lenses for the T3i work for the 5D MKII or do I have to purchase new lenses for it? I'm guessing the lenses for the T3i are compatible with the T4i and the T5i. Thanks!

Thanks for your input! I found the 17-55mm 2.8 to be perfect for my portrait, nature, as well as rolling shots (I would use my 50mm for those rolling shots but it's easier to control the zoom on the lens in comparison to moving a car from a lane to another). I'm deciding that I'll most likely go with the 7d Mark II. I only have about 1500 to spend so I don't have enough saved up for a full frame camera at the moment (even though the 7D MKII is a thousand below a full frame like the 5D MKIII) and I see myself getting one of those in the near future. I've watched a few YouTube videos and to me personally, it's going to take me a while to get to know the camera since it's much more complex than the T3i in terms of the amount of functions it has and the continous AF for video will help me out big time as well (I'm going to be majoring in film and I currently am an active YouTuber). But let me know what you guys think! Thanks again 🙂

Regardless what DXO Mark says, I find this to be more true.  This is compared to other APS-C sensors but mostly the 70D was used in this test.

"At ISO 800 and 1600, the difference, while still not huge, is more easily recognized. The 7D II's advantage grows stronger at ISO 3200 and 6400. I have typically avoided these ISO settings on prior APS-C models, but I'm pleased to see ISO 3200 looking this good. ... As you probably expected to hear at this point, improvements are also seen at ISO 25600.

Going where no Canon APS-C DSLR has gone before, the Canon EOS 7D Mark II brings us the found-only-in-full-frame-models-until-now ISO 51200 setting."

Now you have two differing views.  You  have the lenses, now you need a 7D Mk II.

You have to learn how to read DXO Mark and sometimes between the lines.  And I guess this is true of any review.  My personal experience with a 7D Mk II is limited because I have no use for a APS-C any longer.  But I can say from that "limited" experience it is very good.  Very good, indeed.

You must remember all cameras have a limit to what they can accomplish.  Even the lofty 1Dx has a limit.

That's why I'm going to pick up the 7D MkII. I thought that the T3i was perfect for me a year ago when I first got it (I came from using my mom's Sony NEX-5N and a Sony Cybershot Camera [my own personal camera]) and when I got serious with YouTube, that's when the T3i came into play as well as photography. A year later, I've done more photoshooting than I've made YouTube videos and I realized that I've reached the limit in terms of what I would like to do with my T3i, hence the decision of going for the 7D MkII. Hopefully this will be a good purchase for me in the future!

Hard to go too wrong with that. You already have two bright lenses, which was basically what I was hoping you had or planned to get. Also you shoot moving cars in some way I am not completely clear on, so the better AF will serve you well in that regard, and in daylight the 1.6x focal length boost makes your excellent 17-55 lens and any other lens you acquire considerably longer.

Yeah I'll definitely be doing a lot more night time rolling photoshoots with some friends in the near future. These two are one of the many pictures I shot. Both of the shots, As soon as I turned up the shadows, the grain started showing. Took these both at 3200ISO. 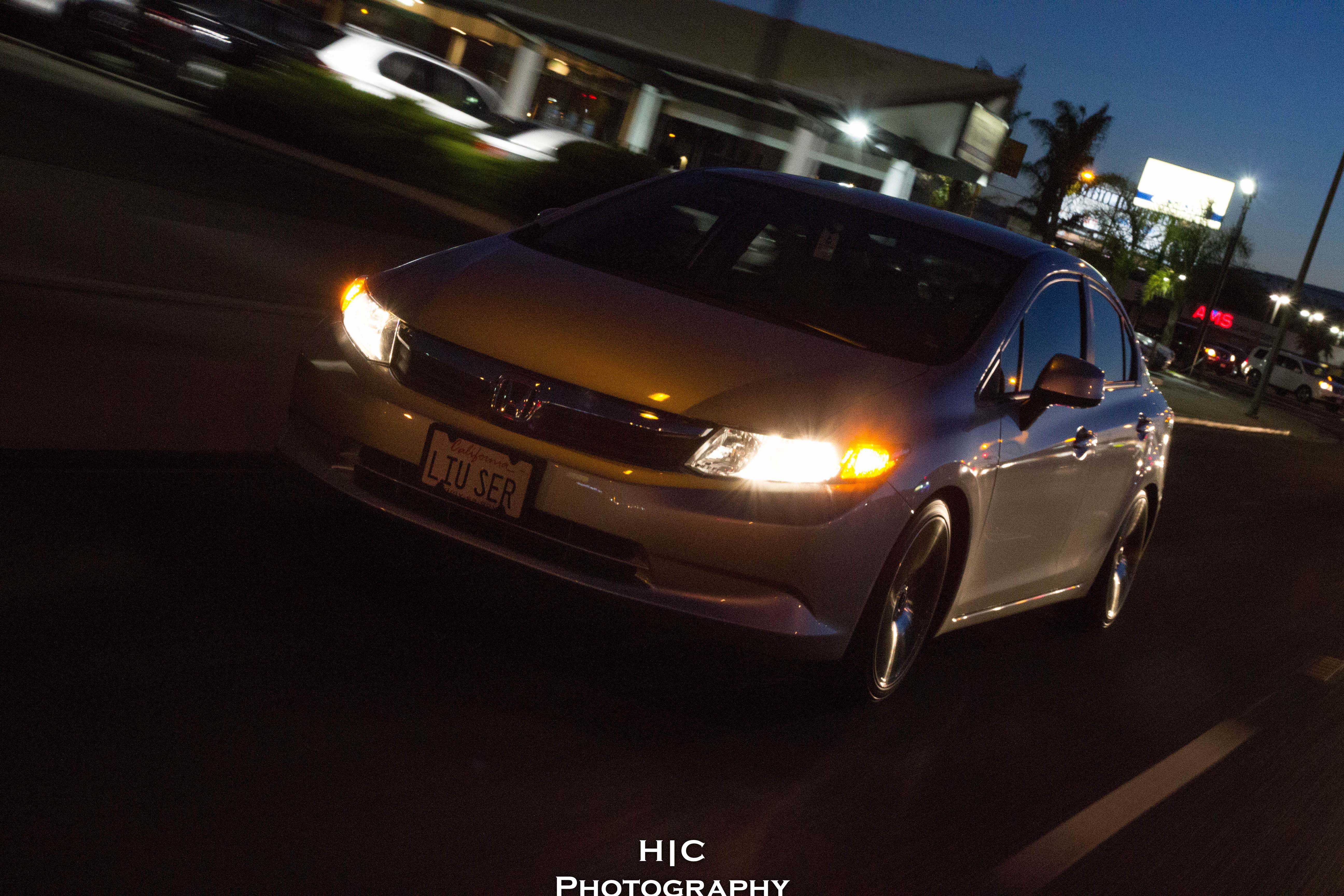 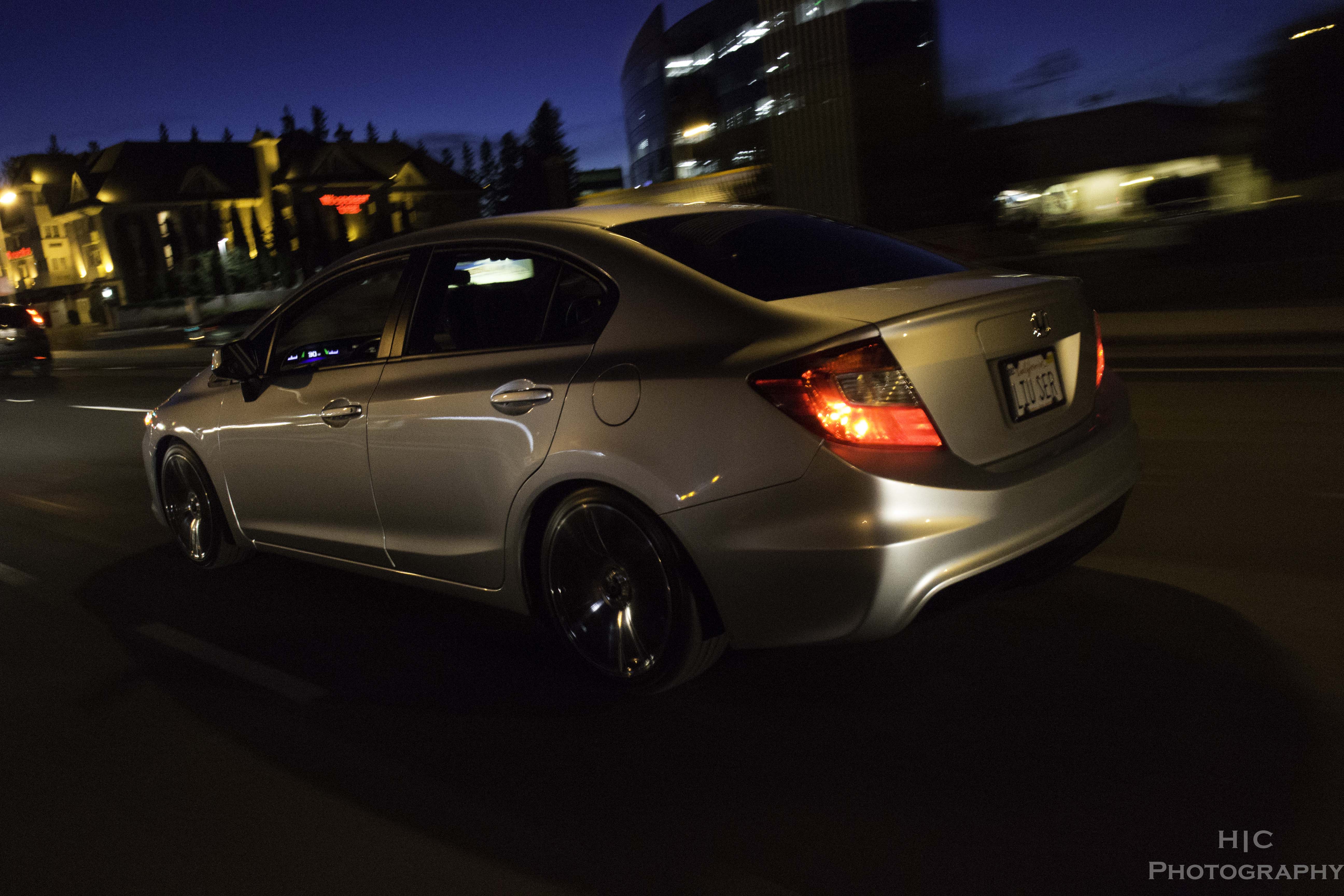 If you "turned up the shadows" on these, they were heavily underexposed... which is pretty much guaranteed to make for a ton of noise as soon as you turn it up in post processing.

To me your sample shots still look a bit underexposed (nore on that in a moment).

In fact, it's often better to overexposure your images a little... I use +1/3 stop for 3200 and +2/3 stop for 6400... then pull the image brightness back down in post processing. This minimizes noise, rather than amplifying it.

I hope you don't mind... I took one of your images into Photoshop, lightened it a lot and increased the contrast... then applied Noiseware noise reduction (same "formula" that I use with my 7Ds when shooting at ISO 3200)... then resharpened the image a bit. Normally sharpening will really increase the appearance of noise, which is why I didn't do any more until after applying NR.

It improved quite a bit, I think. But would have been even better working from an original, full size RAW file that had not been so heavily underexposed. I also fooled around with the color balance a little.... But there are mixed types of light in the image so, I didn't go to far with this. If it were my image and I were spending more time optimizing it, I'd do a color balance on the main subject and foreground, then adjust the background separately. Anyway, here's the result... 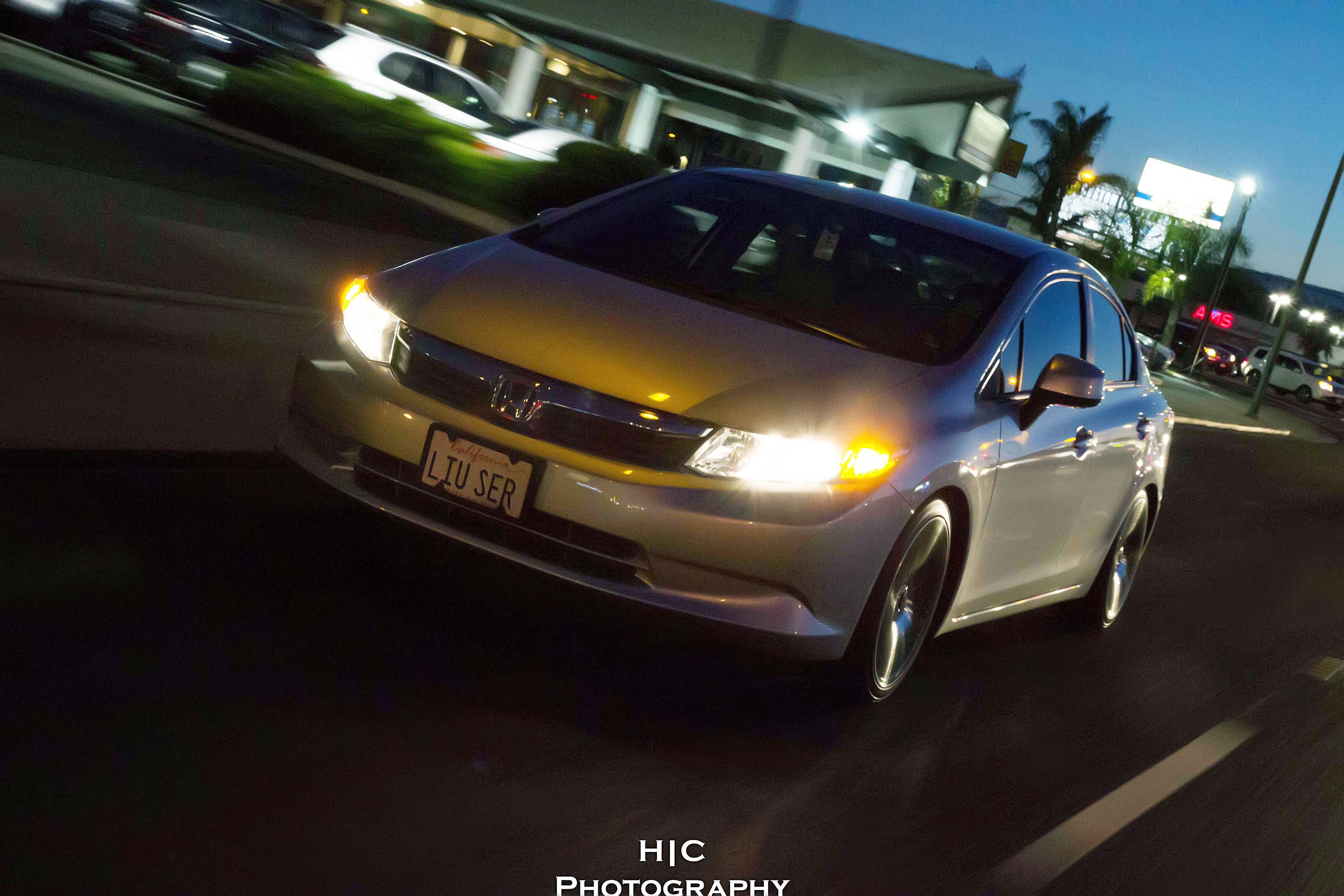 Regarding underexposure... Do you have your computer monitor calibrated? The reason I ask is that most monitors are way too bright to work with photographs, leading you to make too dark images, to the point you don't realize how much you are underexposing them when shot. The first step in calibration is setting the monitor's brightness. When I first got my current monitor 3 or 4 years ago, I had to set it down to about 20% brightness for accurate prints.  Now, after several years use I still have to turn it down to about 50% or my prints and images posted online end up way too dark.

I am afraid you might be disappointed with a new camera if you don't resolve some other things first. Don't blame the gear! As it is, you likely aren't getting anywhere close to the best possible high ISO shots out of the camera you've got now.

thank you so much for the information and advice! No worries, I don't mind at all 🙂 I normally don't mess with any noise reduction filters in post editing because I normally make it look even worse (LOL) so that's why I usually underexpose -1/3 or -2/3 stops. I used to overexpose way too much and my friend (he's a professional wedding and portrait photographer) recommended me to underexpose by -1/3 to -2/3 stops haha. So I guess now, I'll underexpose and overexpose my shots, depending on the situation.

I also use to blame the gear that I have but I understand it more now haha, it's my technique that messed with me in the past and it's still messing with me right now but I know it's a step by step learning curve. I also do not use a monitor, I edit all of my pictures with LR and PS on my Macbook Pro. I just put in the order on BH Photo last night and the camera is supposed to come in tomorrow morning. I'll be attending a car event this Saturday and I'm doing a photoshoot with some buddies on Sunday so I'll keep you guys updated!

thank you so much for the information and advice! No worries, I don't mind at all 🙂 I normally don't mess with any noise reduction filters in post editing because I normally make it look even worse (LOL) so that's why I usually underexpose -1/3 or -2/3 stops. I used to overexpose way too much and my friend (he's a professional wedding and portrait photographer) recommended me to underexpose by -1/3 to -2/3 stops haha. So I guess now, I'll underexpose and overexpose my shots, depending on the situation.

You say that as though it were nonsense, but it isn't really. Wedding photographers use a lot of flash, and with flash you have to be especially careful to avoid blown highlights. Other types of photography have different caveats.

That said, some flash photographers, especially those who don't uderstand Canon's TTL algorithms, do tend to underexpose their backgrounds, sometimes catastrophically. But that's avoidable if you know what you're doing.

Yeah, I was thinking the same thing. I know he uses flash, I just don't know for what type of occasions. I do actually take photography really seriously as I'm going to be majoring in Film and I know photography and film help each other out as they share a lot of the same aspects. I just still have a lot more to learn as time goes by.