Its my first topic here, I hope I will do good. 🙂

Problem that I am having is with T4i (650D) focusing. To me, everything regarding camera settings and environment looks fine, but my photos are blurry. Maybe I am not seeing the obvious, please help if you can.

I don't think shutter speed is a problem since different speeds/tripod usage does not increase sharpness.
Also, aperture opening should not be a problem because I am not talking about the background, although is seems there is some kind of inverse correlation between blurriness and aperture opening.

Below is my DropBox link of photos I have taken with different settings. First few I did manual focus point (the middle point) and I aimed it at my remote. Few last ones are automatic focus points. I analysed them with Digital Photo Professional and it seems that all of the objects in focus points ARE blurry.

All of the photos are taken on Av mode on tripod using self timer. Focusing is on AF mode. IS is on. Unfortunately at the moment I do not have other lenses to rule out the lens.

If someone could give me a hint what to do, that would be great. I would like not to send my camera to official service and spend money for something that could be trivial.

Here is the link:

Your photos seem pretty typical.  Could be missed focus point or camera movement or wrong settings for the subject.

I think your problem is motion blur. Looks like the fastest shutter speed is 1/30 second, and that photo doesn't look bad. The other photos are slower and even multiple seconds.

Get more light on the subject and I think you will be fine. The kitchen wall photo is what I would expect.

Try some outdoor photos of subjects with detail and then make a judgement.

Thanks guys for your answers.

I do not think its a motion blur regardless of the low light conditions. As I wrote, the photos were taken using the tripod at home using self timer. Before I was using >15 s night shots and never had problem with motion blur. But, to certanly exclude that I will go outside and take some photos with more light on the subject (not today though because itsraining heavily).

Exif data is in RAW format? Never heard of it before, I just googled it now.

If you are indoors you can use flash to check things out ( if you can't get enough light with indoor lighting).

Camera shake is the term I should have used vs motion blur.

I have three different tripods.... one is very light but also very "springy".  To use that tripod, it needs to be protected from things that would induce a vibration and "mirror lock-up" mode should be used.  The other two are much much heavier and i swear you could toss a stick of dynamite at under the tripod while the camera is taking a long exposure and I don't think it would move (ok, an exaggeration ... but you get the idea.)

When using very slow shutter speeds on a tripod, you can enable a feature called "mirror lock-up" mode.  Typically you also use a wired remote shutter release.  The first time you press the shutter, the camera does not take the photo... it merely swings the mirror up to get ready for the shot.  This mirror-slap will induce a small vibration on a lightweight tripod.  So you wait a couple of seconds for the vibration to settle, then press the shutter button the remote shutter release a second time... this causes the camera to take the shot.  As soon as the shot complete the camera lowers the mirror.  So the way you shoot on a tripod when "mirror lock-up" is enabled is a "click -> wait a second -> click" pattern for each single shot (but the tripod wont vibrate.)

The best way to test focus accuracy is by using a focus test chart.  You can buy these or you can download your own chart, print it out, and follow the instructions.  The commercial charts are better.  The idea is that you give the camera a flat high-contrast focus target, but next to the target is a scale leaning on an angle.  The center of the scale is the "0" point with graduated markings.  The "0" point is perfect even with the focus target.  You focus the camera on the target, then inspect the scale.  If the "0" point is the sharpest point on the scale then the lens nailed focus.  If something closer or farther from the 0 point is sharper than the zero point... then the camera & lens missed focus (and you can see how far off it was.) 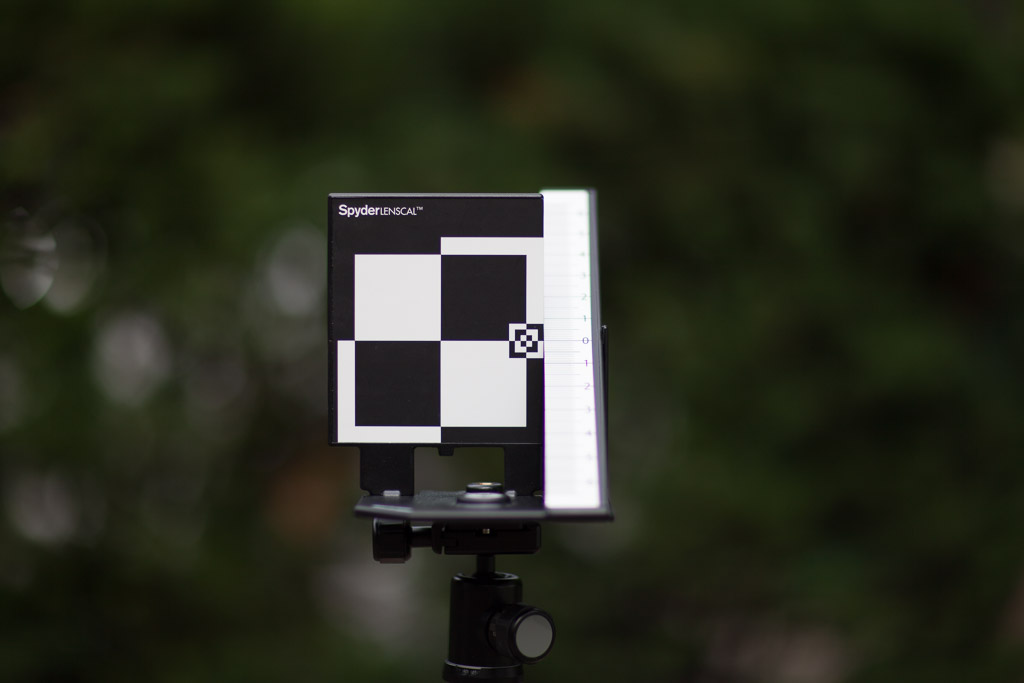 The scale on the right of the focus target is leaning and those marks indicate centimeters and millimeters.  The image is a bit small, but if you had the full-size version of this image, you'd be able to carefully inspect the scale to determine the sharpest point of focus.  Mid-grade and high-end camea have a feature called "auto-focus micro-adjustment" or AFMA.  This allows the camera to be focus calibrated for each unique lens used (each lens will focus fractionally differently ... even two identical lenses, for example if I had two EF 50mm f/1.8 STM lenses side by side, they could get fractionally different results when used on the same camera.  This, btw, is normal in photography and nothing to be alarmed about.

That's a commercial test target, but you can get free test targets online.

This is probably one of the better test targets I've seen (and it's free to download and use) but it does have a drawback... the whole chart is on an angle... not just the scale (as my image above).  That means it's possible that the camera locked focus on a point OTHER than the center of the chart and focused perfectly, but the person performing the test might not know it.   The better test targets off a large "flat" surface so that the whole surface is the same distance from the lens.  Only the scale is on an angle.

Also keep in mind that this is an entry-level kit lens.  It's designed to be affordable and that means there are many lenses in the line-up that are going to outperform this lens.

For example... as I inspect the table leg (lower right) I can see chromatic aberration (color fringing).  Zoom in on the image and inspect that leg and you'll notice the right edge has a thin blue color fringe and the left edge has a thin red color fringe. That is literally the color spectrum separating because red, green, and blue wavelengths all focus at fractionally different distances.  High end lenses go to some great lengths to compensate for the issue.  A lens typically gets no CA at the center and the effect increases as distance from center of frame is farther (the issue is always worst near corners and edges.)  CA, incidentally, is also somewhat easy to fix in good photographic adjustmnet software.

The images you provided don't give me anything of good enough contrast to tell where the lens hit optimal focus.  But based on inspection of the reported focus points (If I inspect the images in Canon DPP I can enabled a feature that overlays the focus points) it looks a bit more like camera vibration than focus.  In the final image, I see the camera reports that it locked focus on a roll of paper towels on the refridge and those actually do look very sharply focused.

Hi.
I'm new here. I have this Rebel T4i. It's working perfectly until yesterday. It won't take pictures in AF. Can take photos in MF but blurred. Unable to lock focus. And everytime i click on the shutter it's not working and sometimes shows 'busy' error. Can only take blurred photos in MF and in AI SERVO mode. Please help.
0 Likes
Share
Reply

As a start remove camera battery and reinstall. Remove lens and reinstall. Make sure AF/MF switch is in AF. Switch camera to AUTO mode and retry in a bright location. Report back with symptoms if it still doesn't work.
John Hoffman
Conway, NH

Will try tomorrow morning outside since awhile ago i tried removing the batt and putting it back on, same with the lens, set to AF then tried to shoot indoor with living room lights ON. But still not working.
0 Likes
Share
Reply

OK. Indoors may not be enough light for AF; that could be your problem vs. a problem with equipment.