I just bought a cheaper (yes I know you get what you pay for) Canon Rebel EOS T7.

Our kids play soccer and they wrestle. It came with one lens 18-55mm.

I’ve tried to take some photos just sitting in the living room and our dog walking is blurry or someone moved a little bit and it’s blurry. My cell phone takes better photos.

What settings do I need to have the camera on for movement? I put the selector on action but it didn’t help.
Me too
0 Likes
Share
Reply
18 REPLIES 18

Ok I have a wrestling tournament this coming week so I’ll give that a shot during warmups. Thank you.
0 Likes
Share
Reply

May I suggest even higher shutter speeds. This may involve also using a higher ISO. Everything about action photography depends on the available light. More light allows faster shutter speeds but less light forces us to raise the ISO to be able to even get into a usable shutter speed range. Start high (1/800 to 1/1000) and if things work out but you're underexposed lower the SS a step at a time OR raise the ISO a step or 2 at a time. Note that as the ISO goes up so does the introduction of noise. Noise is easier to deal with when shooting RAW but that's a future lesson.

Wrestling is not a sport I typically shoot and I did it once to catch senior night for some of the kids who also play football.  I found that 1/500 was fast enough to freeze most motion but the lighting was sufficient that I went to a more comfortable 1/640 using a f2 lens.

Now that almost every camera body features auto ISO, I shoot all sports in manual mode where I select aperture and shutter speed and let the camera choose the ISO to compensate.  With wrestling, you MAY be able to also manually set ISO if the lighting is even across multiple mats but that will depend upon the venue.  You can limit the maximum ISO it can choose automatically to prevent it from choosing a value that creates too much noise/loss of detail.  Check your setup during warmup prior to the match and decide if you need to drop to 1/500 or even slower to keep ISO in check but I would not want to go slower than 1/500 if you want to catch any relatively fast action.

Shoot in RAW, this will allow you to recover from a lot in post and it will allow you to do the most with noise reduction after the event.  The only time I shoot in jpg is when I get a new camera body and forget that Canon sets the default to jpg output.  The first two test images with my 1DX III were in jpg before I realized the default; it hasn't been used to create in camera jpeg files since.

My rationale for going manual is that I know I have to choose a shutter speed sufficient to freeze action and with most sports lighting I will be shooting with aperture wide open.  Before auto ISO was a feature of most bodies, then shooting Av priority made sense because you had to manually select ISO and then let the camera choose as fast of a shutter speed as possible but auto ISO is going to provide better results with auto ISO available.  I haven't shot a sports event using anything but full manual with auto ISO since upgrading from a 1D Mark II to a 1DX many years ago.

Wrestling is definitely a different event to shoot and I didn't realize I would be doing so until 30 minutes before it started.  Not much time for research and I had never even watched wrestling prior.  But here are some examples of what 1/640 will do.  I would have loved to have had more time to learn proper photographer positioning because location is critical.  I have that down for football, soccer, and basketball but definitely not for wrestling. 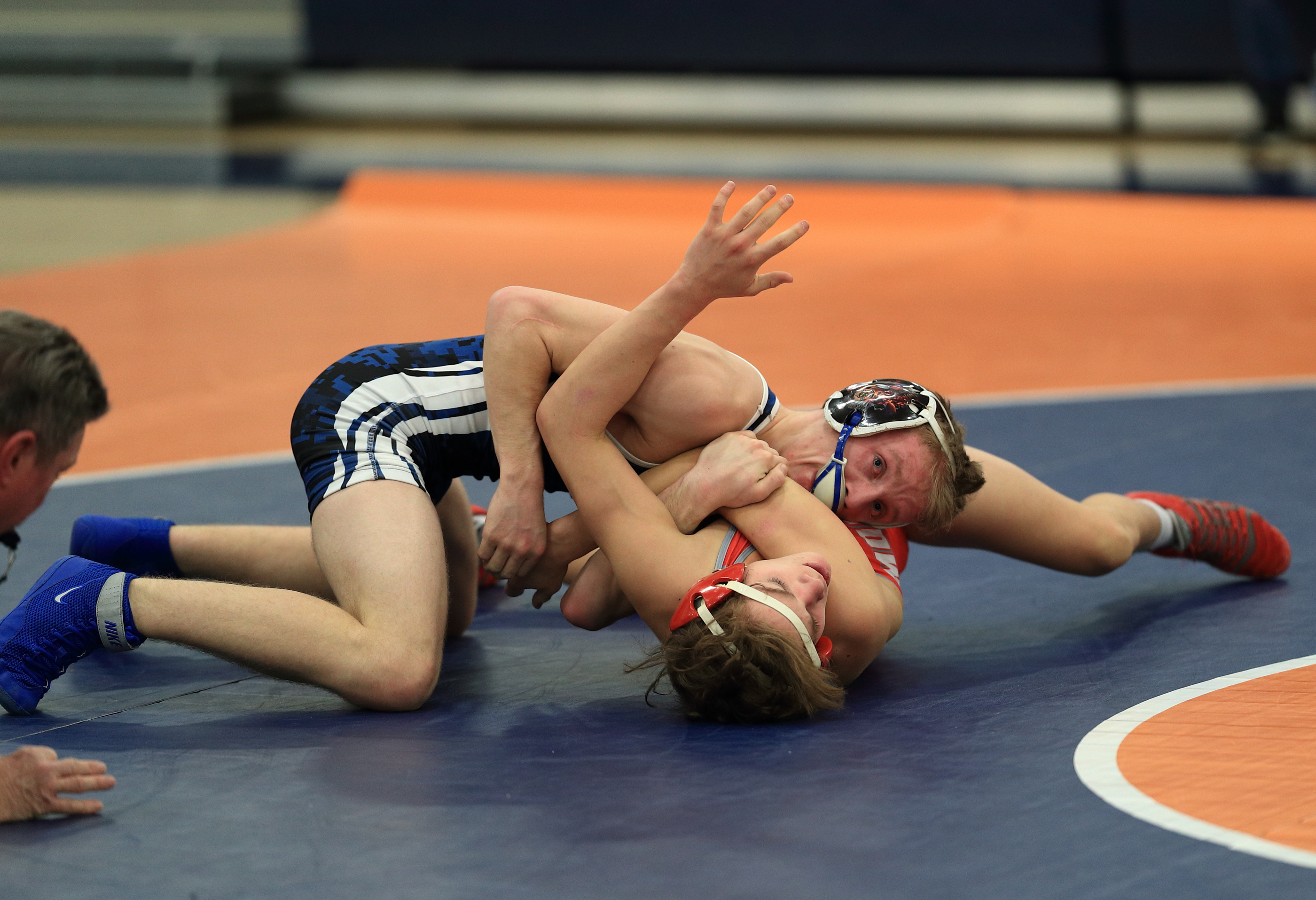 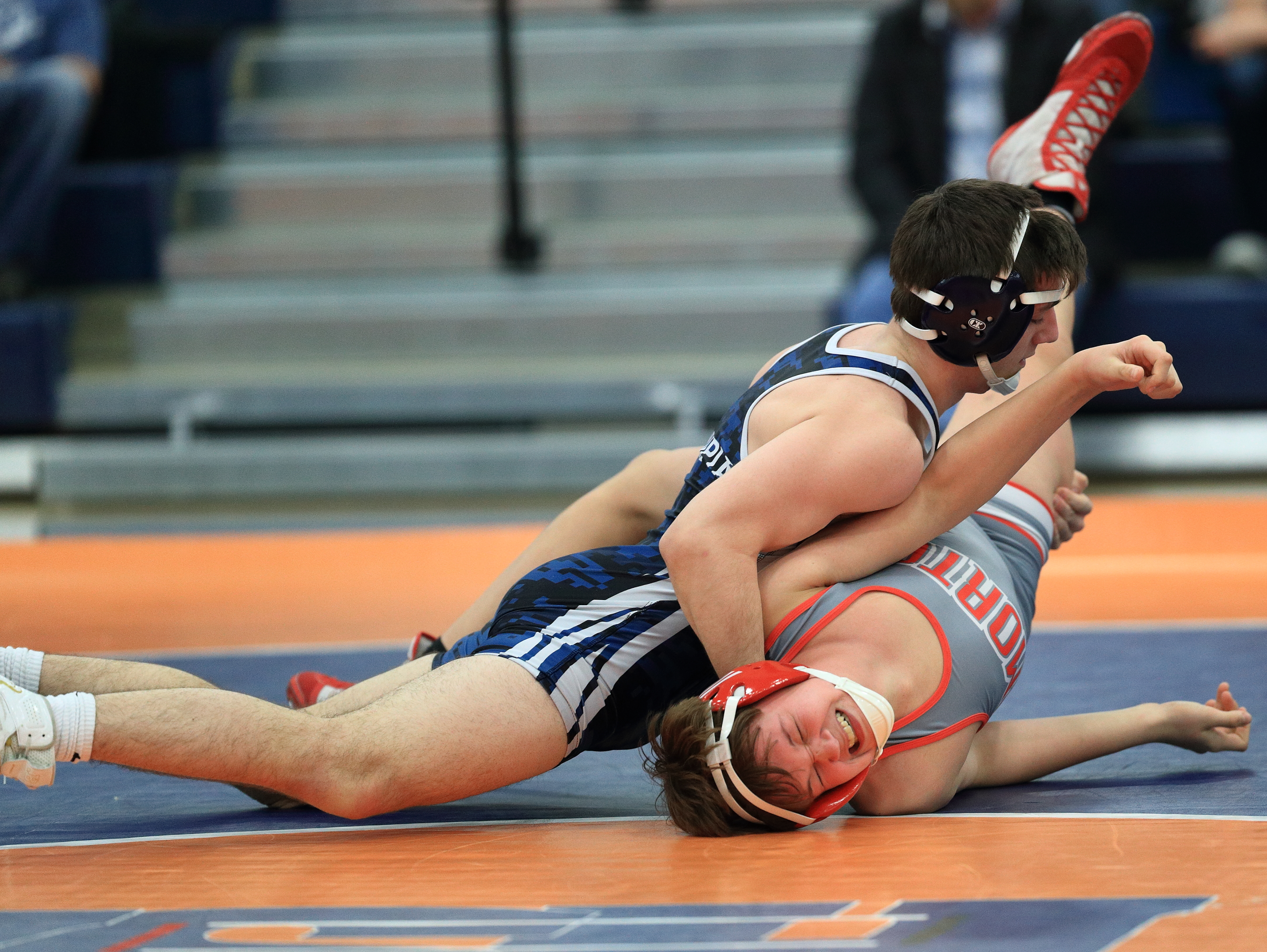 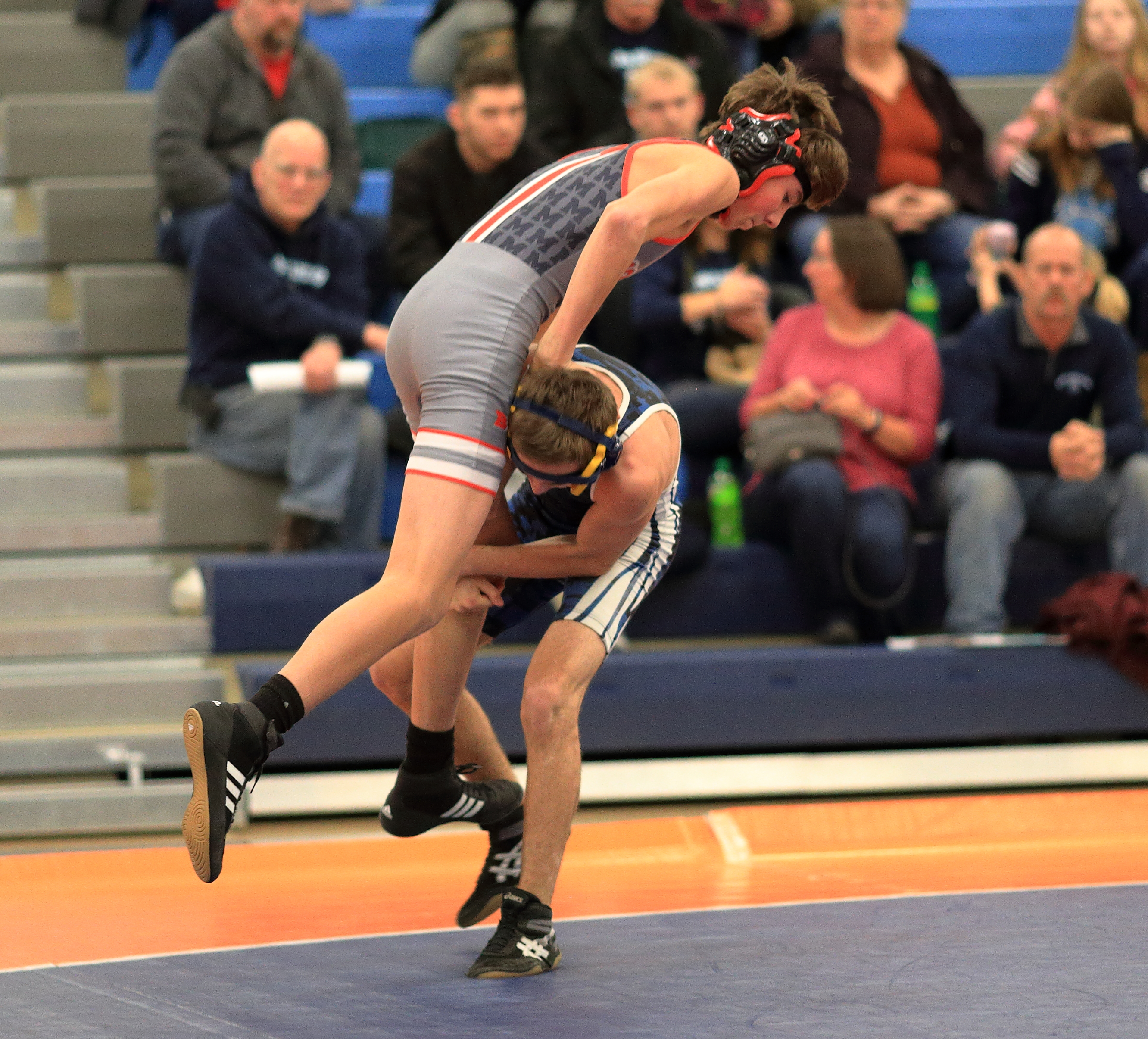 Thank you and those are nice pics. I’ll be shooting from the stands using my longer lens at duals and through the state tournament in 5 weeks. I’ll definitely be reading the manual and try everyone’s thoughts. Thanks again.
0 Likes
Share
Reply

What is that "longer lens"? If it's not in the f 2.8 - f 4 range wide open it's another reason you will likely need to rely on higher ISO's.

That's a "slow" lens (F 6.0) when zoomed to where I suspect you'll be to get the shots you will be after. Be prepared to raise the ISO to get started with early shots for evaluation then adjust both SS & ISO to suit.

I agree with the other poster that is a pretty slow lens (limited wide open aperture ability) unless the lighting is exceptional.

The shots I took were in the ISO 2,000 to 3,200 range using f2 lenses wide open and that was in a recently upgraded arena with far better than average lighting for a high school facility.

If the school doesn't have a photographer, get some experience early in the season shooting from the stands AND then if you can swing a Canon EF 85 f1.8 (around $400 new when it frequently goes on sale) it would be a great lens for wrestling and other close access indoor sports IF the coach/AD will grant you floor access.  You would have to shoot all of the team and not just your son to justify access but if nobody is getting good photos from the events then you probably have a good shot at gaining access if you can demonstrate ability to get some decent stuff from the stands.  I have coached before but how to stay out of the way and staying in compliance with regulations is pretty easy to pick up regardless of your past sports experience.  You might also approach the school about shooting a practice to get more experience and to demonstrate what you can provide with the proper access.

The 85 f1.8 works well in low light both on full frame and APS-C sensors.  I shot a lot of indoor soccer with it on one of my camera bodies.  It focuses quickly and is a well behaved very compact lens.  Canon has a few lenses that I think are exceptional values for what they do, the 85 f1.8 is one of them and the 400 f5.6 is another.

And if you get floor access, remember that officials love to have photos also which is a good way to gain good diplomatic cover and have them watch out for your access.  When I shot the senior wrestlers, it turned out to also be the official's last match before retirement and he really appreciated getting several photos from his final match.

I shot a HS soccer match Saturday and the head ref told the two linesmen to look sharp because they would get some good photos of themselves from the game.  I didn't disappoint them and they took care of making sure I had the access I needed and also fed me during the half.

Joe Namath did Isotoner gloves commercials for years with the the tagline that they took care of the hands that took care of him.  Taking care of the officials and coaches will make your event access much easier and more enjoyable for you. 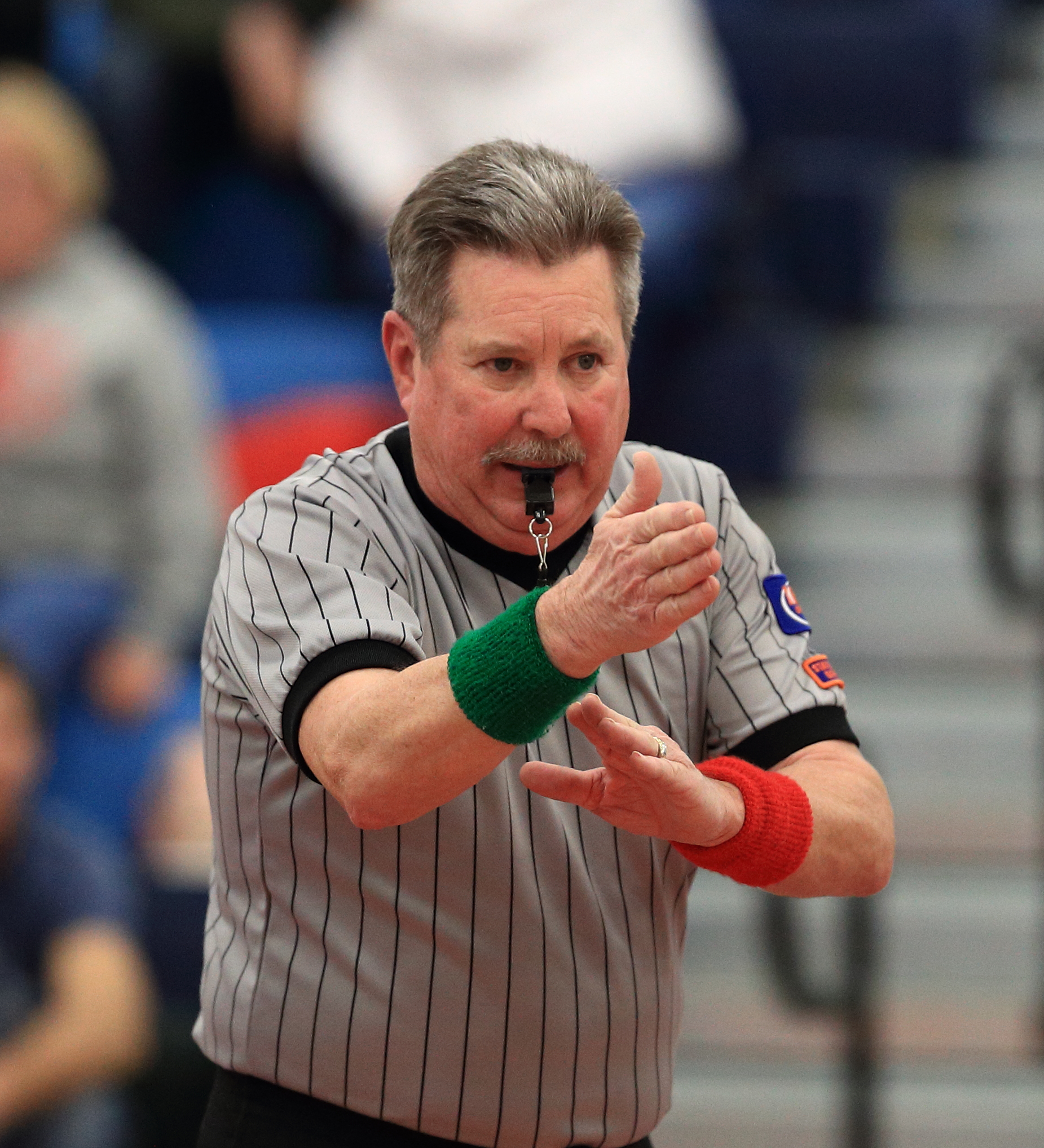