Weird thing happened today during an outdoor portrait shoot with a friend:

I was going through my menu options on the display and it showed a blank screen. Naturally, I thought my battery died, but after switching out the battery, it was still blacked out. I noticed that the camera was still working because I can review photos and change menu settings through the EVF. And when I open the display screen, it works... until I flip it or close the screen with the display facing me. Whenever the display is inverted for viewing on the rear of the camera, the screen just blacks out.

Am I screwed?? I tried going through my menu and display options to see if I forked up somewhere, but I don't think I messed with any of my settings! What's even stranger is that the touchscreen still works when I hold the camera up to my face and use the screen to move my autofocus point. It just doesn't display anything.

Hi Krystof, and welcome to the forum:

From what you say, the symptoms suggest that you have a loose connection in the circuit that travels along the articulation to the rotating LCD.  I think you need to contact 1-800-OK-Canon and talk to their tech support, and it will likely have to go in for a fix. 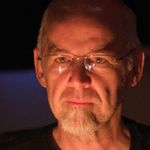 The camera will either display on the EVF, or on the LCD -- not both.  So if it's displaying on the EVF, that means that it thinks you want to see the EVF, not the LCD -- it's not even trying to send a signal to the LCD.

My first thought would be that you've set the EVF/LCD switching mode to something unexpected, which is easily done.  I don't have an RP -- I have an R5 -- but check the manual.  If you've assigned a button to switch, see if you're pressing this accidentally.  Also be careful if you have any object -- face, hand, whatever -- anywhere near the viewfinder, which will trigger the proximity sensor there.

Then again it could be an actual failure; either of the proximity sensor, or the sensor which determines what position the LCD screen is in.  In which case you'll need service.