Auto-suggest helps you quickly narrow down your search results by suggesting possible matches as you type.
Showing results for
Search instead for
Do you mean
Reply
Topic Options
perkcan
Occasional Contributor

Windows 10 Photo application hijacks the import of images from my Canon PowerShot.  Does anyone have information about how to successfully set CameraWindow as the default application loaded when a Canon camera is connected via USB?

(For the record, I'm not interested in commentary on the Photo App or how to use it.  I have explored the settings enough and played with it enough to already know it is an cheap, inferior program.  I simply want to configure CameraWindow how it worked on Window 7, how it was designed to work.)

Prior to Windows 10 upgrade, I had Windows 7 with CameraWindow 8 installed.  When I plugged my PowerShot SX510 into the USB (or any of my canon cameras), CameraWindow would start automatically.

Not only did CameraWindow start automatically on Windows 7 (and prior versions), but it was easy to configure the default applications for Auto Start on Windows 7.  Windows actually allowed changing the settings and honored the settings I chose.

But on Windows 10, it ALWAYS starts the Photo application.  I have changed Auto Play settings, default application settings, device settings (Control Panel - Device and Printers) for the camera, but NOTHING works to stop the new Photo App from starting.  In the Device settings, the "Download Images..." option lets me choose CameraWindow, but on the General Settings page, another option says "Import  photos and videos (Photo)" but is greyed out, so it can't be changed.  Microsoft essentially forces the use of their own software and ignores the other settings.

It is very annoying on many levels.  Perhaps the worst is that Windows 10 removed all ability for the user to configure options in this regard!

Second, the Photo app has very limited settings:  There is no control over the import process, like the folder structure, image rotation options, etc.  Finally, CameraWindow itself has no option to make itself the default.

Have you checked Canon Support for a Windows 10 version of the program? I'm waiting to do my upgrade to Win 10 until everyone else seems happy with it.

"A skill is developed through constant practice with a passion to improve, not bought."
Report Inappropriate Content
Message 2 of 36 (14,223 Views)
Reply
0 Kudos
jrhoffman75
Honored Contributor

Yes, I downloaded and installed the most recent CameraWindow DC 8.10.4b --listed as compatible with Windows 10. It updated the software, but did not change any defaults.
Report Inappropriate Content
Message 4 of 36 (14,195 Views)
Reply
0 Kudos
perkcan
Occasional Contributor

Thank you for the linked page, since it shows most of the new Windows 10 management options I tried.  However, most of those options are for apps triggered by opening a file or navigating to a URL (i.e. by file type, by protocol).  These settings do not set what happens when a USB device is connected.  In the "Set defaults by app" page, CameraWindow is not even listed.  The list of apps includes primarily Microsoft apps along with a few other applications that have registered themselves "correctly".

None of these new Windows-10-style option pages set the "traditional" AutoPlay and other device settings.  The new settings appear to either be the same or supercede such traditional settings, but by going to the classic Control Panel, one can view and set AutoPlay setting as well as Devices and Printers settings.

Within Device and Printers, I find and double click my Canon camera device.  Here's what I see: 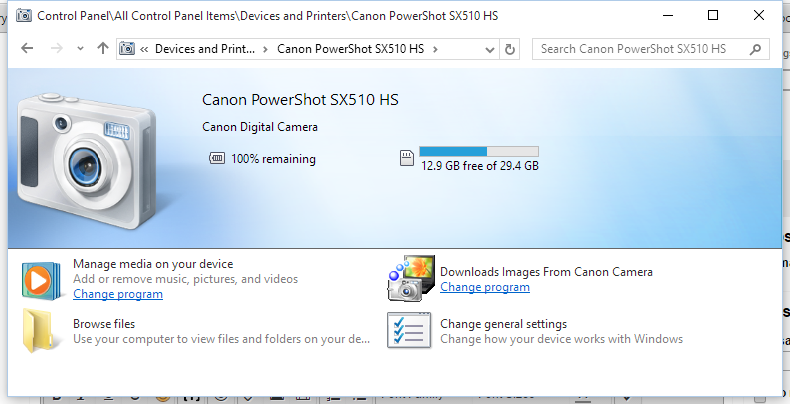 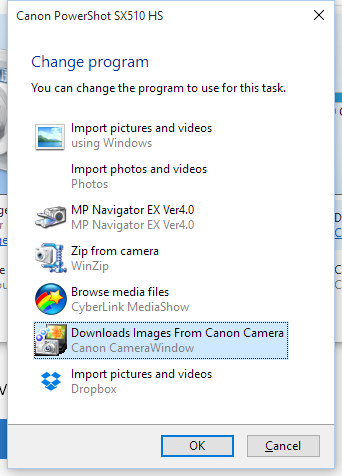 These are the options which would be listed in the AutoPlay dialogue which was displayed previously when the camera was connected.  Even though this is what changes the behavior in previous versions, it is apparently ignored on Windows 10.

Now look at the the last "general settings" page.  See that the option is greyed out, and it shows the new Photos app.  I've even looked for a registry setting to change this, but was unsuccessful in finding one. 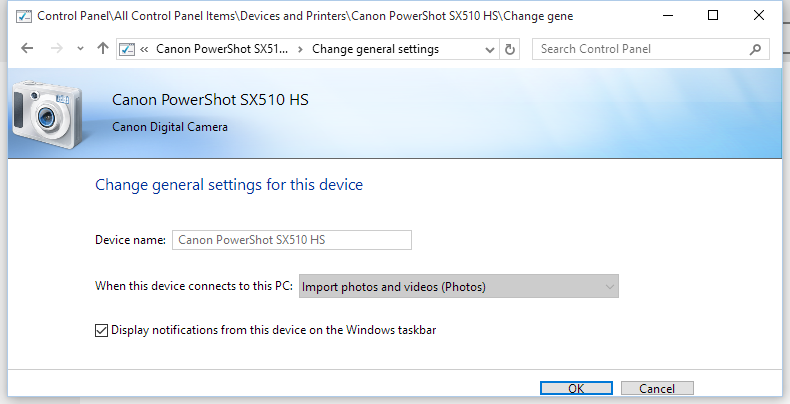 For the record, this also did not work:

All due respect to the support people, but I highly doubt they know anything about this.  Much of the problem is with Windows 10 and I doubt support is familiar enough with it to axtually know how to hack Windows 10 to fix it.  Further, I find most companies purposely let their software go out of date, one more factor to encourage buying new hardware which is officially "Windows 10" compatible.  What better excuse than to blame another company on the glitch?  I post here and in other customer forms in the hope to find a real solution.

You may be correct, but 1. Canon believes the software to be W10 compatible and 2. It's a free call.
John Hoffman
Conway, NH

This sort of complication is exactly why I just pop the SD card out of the camera and plug it into the USB memory card reader, or built-in reader on my computers.  Auto import puts you at its mercy and weird stuff can happen.  I just drag and drop all the files on the card into a dated file for them I make on my portable hard drive.  Easy peasy.

Also, the transfer speed is faster when you plug the card into a card reader than when you wire the camera up to the computer.

Also you don't need to worry about running down the camera's battery like you do when you leave the card in the camera and you plug the camera into the computer.