May 1 - it works now, and I have no idea why. Every day, my PC auto re-boots at 2am. I suppose I should have re-booted yesterday, maybe I would have spent less time fiddling with this. But I wanted to send a real letter to my son stationed in Germany, and the printer had been working fine. If you'd like to glance at the issue below and provide some insight, that would be great !

Hi, my MX922 has "gone offline" and I have no idea how to wake it up. I purchased this in Jan this year, set it up wireless, everything going well. I don't print very often so I've turned it off now and then, but it would connect no problem upon restart.

I see this issue occurs frequently. I had the same issue on a previous MX922 that was never resolved, so I set that earlier printer as a local printer with direct wired connection. But then my wife couldn't print from her Mac.

This new one worked great on wireless, but now the connection is kaput.

Both my PC and the printer can recognize the other, but something is amiss

Here it is offline (grayed out). Where's the button that says "go online" ???? 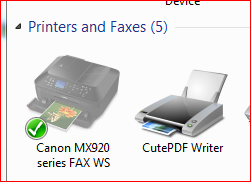 So I re-connected the printer via setup, connecting normally, entering my Wi-Fi password, and it says "Connected". But it won't print, the printer remains offline. For the life of me, I can't figure out what this even means, "offline", since the darn thing just connected !

Then I tried WPS set up, which I had done when I originally got the thing. It says WPS device detected, but then it never detects it, says "Timeout error".

THEN, I tried to detect the printer from Windows, it is found, but CAN'T CONNECT !!!

When I try to print a test page, I get this: 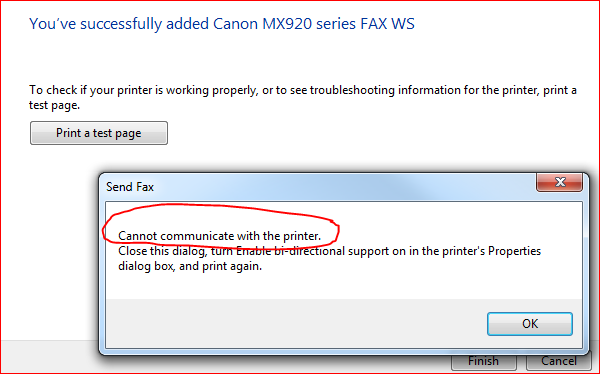 NOTE: When I installed the printer, it showed up as "Canon MX920 Series FAX WS", not sure why it's FAX and not Printer. But when I print, I'm able to select the Printer and that worked.

2 people had this problem.
Me too
0 Likes
Share
Reply
2 ACCEPTED SOLUTIONS
Go to solution

Routers have a feature that will disconnect devices that have not been in use for a period of time. If you do not use your printer, the router will stop sending wireless signals to it and will become disconnected from the network. Please refer to your routers manual to adjust this time out period or disable it.

The FIX is to go into:

jrhoffman, thank you, that helps, I've been wondering about that.

FYI - my home printer went offline today again. I was connected to my work computer via Cisco AnyConnect / Remote Desktop, and I tried to print, but the printer then came up offline. So I re-booted and voila, it was ok.

Is there any way to "bring it online" ? That was my main question below.

Routers have a feature that will disconnect devices that have not been in use for a period of time. If you do not use your printer, the router will stop sending wireless signals to it and will become disconnected from the network. Please refer to your routers manual to adjust this time out period or disable it.

Did this answer your question? Please click the Accept as Solution button so that others may find the answer as well.
1 person found this solution to be helpful.
Me too
1 Like
Share
Reply
Go to solution

I am on windows 8.1.  Have Canon MX922.  it used to work great all the time. then a while ago did not with my old router, which had to be replaced. I replaced old router with NETGEAR R7000 and it did not work well with that - so bought a printer cord and just went from Printer itself to my computer directly.  STILL same issues.  All kinds of errors and it's luck of the draw to get it to work at all. I have to shut down computer, shut down printer - send something to printer and if it says offline or error - I go to lower left of computer Rt Click on start button, select printers with left click, and toggle printer (which by the way like someone else said has to be the Canon MX920 series printer WS, and sometimes it works sometimes no.) Driving me nuts - I don't care if it's hooked up to router - I'll print directly from this computer I'm typing to you on. But what can be done to stabilize this thing and get on with life? I print alot here - we do photography and sometime I print in color just to get ideas before sending it to the real printers we use for our customers.   Will someone tell me ideas to try? And...... if possible keep it simple I am not the computer maven some of you are - I can however follow directions and with a screenshot or sample to see can do most things....  thanks! Pinina in Phoenix

My printer worked fine on my PC but it quit, so I decided to add the printer to my laptop and have problems of this nature (offline) ever since.  I followed directions for fixing even deleting drivers and reloading drivers the printer works until I shut down when I boot up I have the same problem. Any solution?

So that the Community can help you better, we need to know exactly which operating system is running on your computer (i.e. Windows or Mac OS, and which version thereof). That, and any other details you'd like to give will help the Community better understand your issue!

If this is a time-sensitive matter, search our knowledge base or contact our US-based technical support team at http://canon.us/SupportCF

So I got rid of my Canon printer because of the wireless issue. Then I had the same wireless issue with a new HP home printer. So it turns out that (for me of course) it was anti-virus software (McAfee, Malwarebytes) ALONG with my work VPN connection. Now it's the VPN connection - if I'm connected, I can't print. When it's not connected, I can print.

I have Malwarebytes turned on, but still need to turn McAfee back on and see what happens.

It all boils down to careful troubleshooting - but this was a year in the making for me.

The FIX is to go into: