MG3600 series printer is not visible for Canon PRINT app

This is my third home printer from Canon, and it is starting behaving like the other two -- gradually dying the same way as the other two. Maybe this is a consipracy theory, but all three (different models) start dying shortly after the warranty has ended 😞

It all starts with some weird WiFi conncectivity issues - it is loosing the connection one day. Restarting the device helps for some time, but  the time it is working fine after the restart is getting shorter and shorter. Then printing get slower and slower. Then some error is displayed (printers with a display) or the error led is blinking. Then restarts stop helping and the printer dies for good.

My current printer is at its dying stage 1 -- it loses connectivity and the printing is slowing down. It gets not pingable at times, but restarting it helps for now.

But even though it is available from a web (the admin console), I can print from my Windows machine (although the printing is signifficantly slower), but I cannot access it from my mobiel app any longer, thus -- I am not able to scan any longer. Reinstalling, changing from 5G wifi to 2,4G does not help. The app just can't find it even though it is pingable from the home network.

I am under a very stron impression that Canon printers have the death time programmed on purpose, and I do not feel good about that, let's be honest -- I feel robbed and deceived.

Question: am I alone experiencing that? Can I do something to make my mobile app working again? Can I trust Canon for the fourth time or finally leave this make and move to something else? Do any other makes have the same issues (pre-programmed day of death)?

I am sorry for that, but it makes me feel genuinely frustrated, especially that I am not a heavy printer user - several up to several tens of pages a month. One may say: what do you expect from a cheap printer? Fine, but the other two were one of the most expensive ink printers those days. And the most frustrating thing is that the other two dies just after I loaded the ink cartriges, the XL ones, most expensive. Same happened now -- I just loaded new XL catriges (much more expensive than the printer itself) and most likely I will again have to throw them in the trash bin :(((

Let me know what you think.

So that the Community can help you better, we need to know exactly which Canon printer model you're using. That, and any other details you'd like to give will help the Community better understand your issue!

Thank you so much for your quick answer.

So, currently my printer that is gradually dying (again) is Canon Pixma MG3650. I can still kind of print with it, but it requires restarts from time to time to get it connect to the wifi.It is working great several hours, or a day, and then it disappears from my LAN (the ping does not respond) and another reboot is needed. This is especially frustrating as the printer is located in the opposite part of my house.

Once it's connected and when it is pingable -- not only can I print but also access it from the web browser in the local network where I can manage its settings. But when trying to connect to it from my mobile app (either from Android or iOS devices) it says "Cannot communicate with the printer". So I cannot take advanted of the scanning functionality at all (the feature I need the most currently).

The quality of the connection is very good (see below), so this is definitely not the problem of the wifi signal strength. 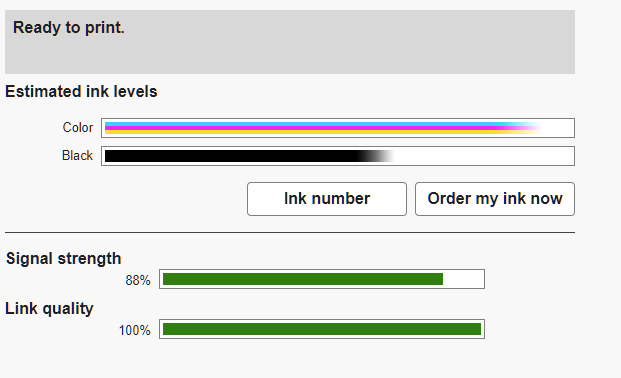 The router is about 2m away from the printer, so pretty close. My router is Asus RT-AC88U

It may not be relevant but I replaced the router recently, Previously I used another model of Asus (RT-N66U), but can't tell the problems started after the replacement. It may just be a coincidence. No other computers or appliances suffer from any wifi issues.

I also use some Linux based computers in my LAN and the printer is visible only shortly after its reboot, then it disapears from the network neighourhood (yet still awailable for Windows printing).

What is also interesting the printing itself is getting really slow -- the printer stops several times while printing a simple text page. So, printing one page sometimes takes a minute or so.

Like I said - the symptoms have been identical for each Canon printer I have used so far. Afer about 2-3 years, no matter how hard the printer was used -- it ended up with the same: wifi issues, printing slowness, error led blinking (going away after reboot), death - always shortly after loading XL print cartriges which makes it pretty costly, as the cartriges cannot be reusedi na new printer. This is why I tend to think their death was consciously built in the firmware or something.

Also, I wanted to check the printer with the IJ Network Tool, but here is what I get while trying to downlad one:

I would appreciate your help and advise as I am very close to switching to another vendor after about 9 year of being faithful to the Canon brand....

Thanks for the information about your printer model, though we need to let you know that the PIXMA MG3650 is not supported by our team here at Canon USA as that printer is not available in this country.  We are only able to provide support for Canon products manufactured for and used within the US market.

Feel free to discuss Canon products sold outside of the United States, but please be aware that you will not receive support directly from Canon USA.

Thanks for choosing Canon!

Thank you so much for your reply, much appreciated!

Although I think nobody is able to help me in fighting against the planned obsolescense that I am a victim of, again...