I have a Canon Rebel Xs and when shooting football games all is great until it gets dark.  I use the sport mode, rapid shooting and I realize there isn't enough light for the shutter speed, so blurry pictures are the result.  I use a 250 mm lens but am thinking of getting a 300 mm lens, not sure if that will improve the problem.  A friend uses a 300 mm lens (Nikon) and her photos are not blurry.  What can I do to improve the nighttime pictures?

You'll need a faster lens (f2.8 or better), and a higher ISO which will add noise but it will help get a faster shutter speed, & I'd recommend shooting in either Av mode or Tv mode & trying different settings to see which works better in your environment.

"A skill is developed through constant practice with a passion to improve, not bought."
0 Likes
Share
Reply
Go to solution

Thank you for the speedy reply. I appreciate your help and will try this. I have also been advised to not use the image stabilizer but, won't that add to the blurry problem?
0 Likes
Share
Reply
Go to solution

300 mm is not enough more length to make a difference.

I suggest you look at the exif data of your friends pictures and see what the differences are. I suspect they are using much higher ISO - which an XS might not be capable of - and faster shutter speed.

@Hilda1 wrote:
Thank you for the speedy reply. I appreciate your help and will try this. I have also been advised to not use the image stabilizer but, won't that add to the blurry problem?

I think there are two things that would make a big difference.  A faster lens has already been mentioned.  But, a wide aperture telephoto lens can be expensive, especially f/2.8.

A camera with better ISO performance would make a significant difference, too.  I think your camera tops off at ISO 800-1600. Ask your friend what ISO and exposure settings they are using.  When I shoot "Friday Night Lights", my typical exposures are 1/400, f/5.6, ISO 3200 to ISO 12800.

The only worse lighting I have found than high school football is the indoor soccer arena where my daughter plays her winter club games. Low lighting requires a fast lens and a sensor that will provide reasonable noise performance at high ISO.  You also want a lens and your placement that will allow images to fill as much of the sensor as possible since you have far less latitude for cropping as noise increases.

I shot a few images for a friend at a football game last week and I was shooting from some distance away unlike soccer where I am just off the field of play.  I am adding a 300MM F2.8 before my daughter's club season starts this year and it would have come in handy at the football game where I used my 70-200 F2.8 instead which is really too short for this purpose with a full frame body, especially since I was about 25 yards off the field of play and not moving with the plays.

These images below may be of interest to you because they were shot at 1/250 instead of 1/500 which is typically the recommended minimum shutter speed for high school football.  Even though my 1DX M2 has an excellent sensor I decided to experiment with shutter speed because I wanted to see how things would work out in shots where high shutter speed isn't critical.  Keep this in mind with your camera because it will be even more important with a sensor that has more noise as ISO speed is increased.

Autofocus systems work far better with more light and this is where a F2.0 or F2.8 lens is very helpful for very poorly lit sports venues.  So even when you can get to a reasonable spot on the exposure triangle you still have an issue with AF and fast moving sports in poorly lit conditions.

Also remember that some of the coolest sports shots are the expressions right before a snap, expressions in a huddle, post score celebration, etc. where you can drop the shutter speed and end up at a better spot on the ISO curve.  If your current camera body and lens isn't quite up to catching the faster action parts of the game then concentrate on the parts you can capture. 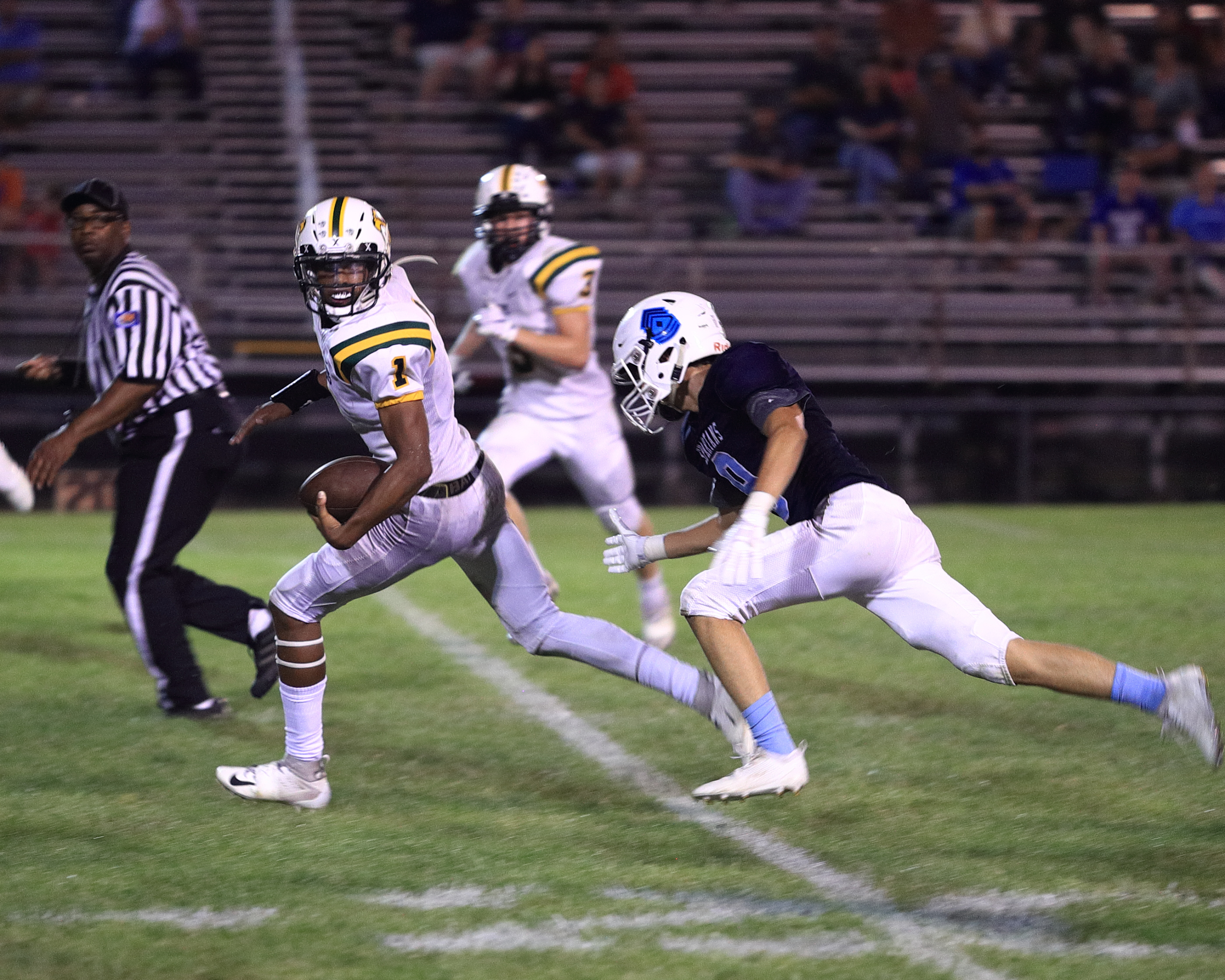 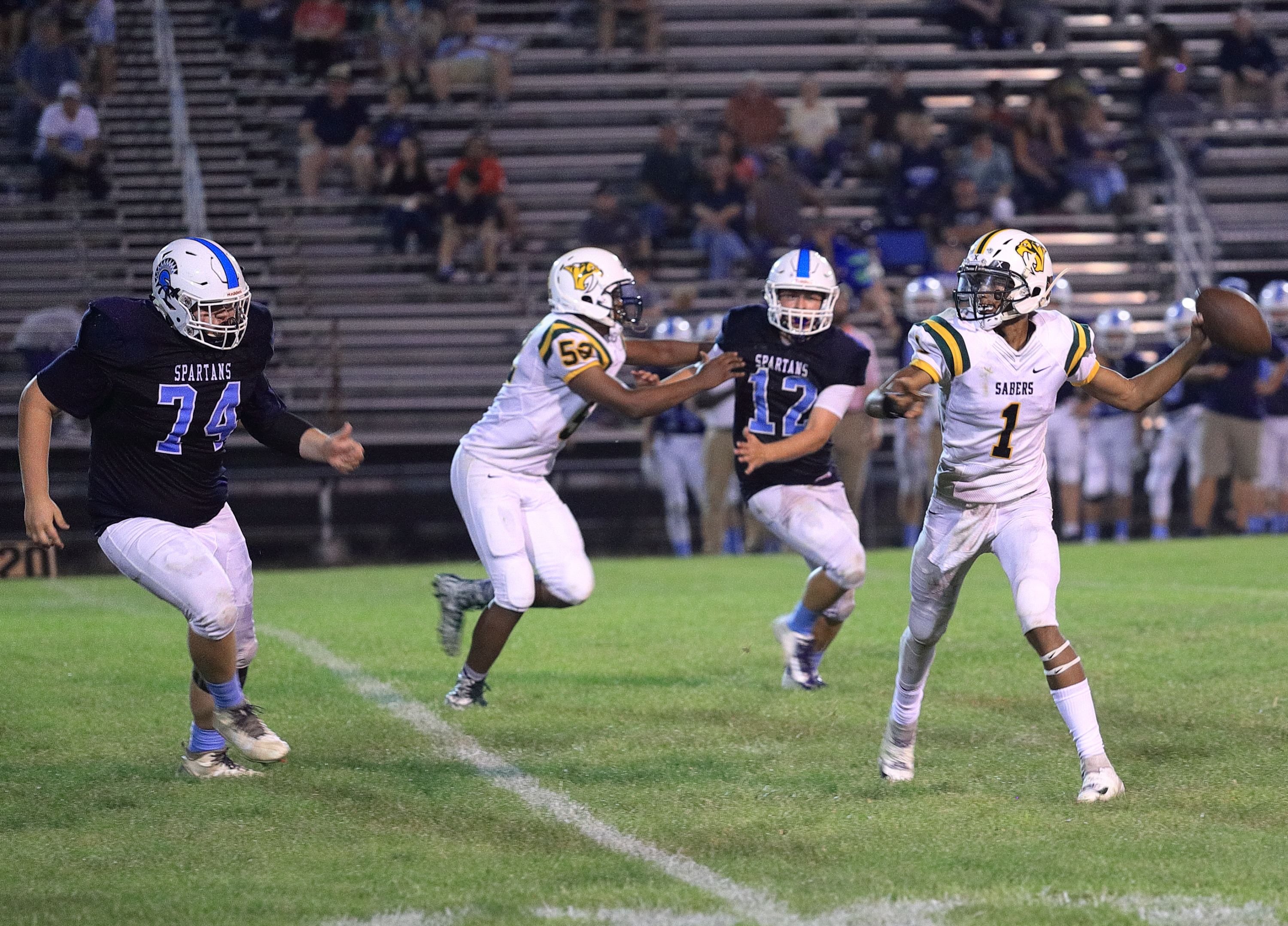 So many good points and my next opportunity is this week, as long as hurricane Florence does not ruin our plans. Thank you for taking time to help me. I am anxious to learn and need so much more information each time. Eventually I will get this.
0 Likes
Share
Reply
Go to solution

So many good points and my next opportunity is this week, as long as hurricane Florence does not ruin our plans. Thank you for taking time to help me. I am anxious to learn and need so much more information each time. Eventually I will get this. Great shots you took, I hope to be just as proud of my future shots.
0 Likes
Share
Reply
Go to solution

What kind of camera/lens would you recommend? I able to upgrade and would like some input from a pro.
0 Likes
Share
Reply
Go to solution