thanks for the help

This doesn't specicaly answer your question, but you have a large camera and lens combination.

You might want to consider a lens tripod ring that will allow you to rotate the lens and keep the weight centered over the monopod; otherwise you will be constantly trying to keep the monopod from falling over.

I have two monopods... one with a ballhead on it, the other without.

The ballhead I use is a modified Manfrotto 308RC... this has been superceded and I think the most similar current model is the Manfrotto 492. This has a single lever to lock or release the ball, and no panning axis (that's not needed on a monopod).

I've modified mine by replacing the quick release mounting platform that was on it with a basic Kirk or Wimberley like this...

... which is compatible with the Arca-Swiss style lens and camera quick release plates I use on all my gear. This type plate and platform allow sliding the lens forward or backward a little as needed, for better balance.

Yes, it would work fine with 70-200/2.8L IS II. That lens is the same size and weight as the first version of that lens that I use, and similar to my 300/4 IS. I've used those and larger lenses on it without any problem.

If using another lens without a tripod ring on the camera, in order to mount it on the quick release platform you need to have a camera plate installed.  Below is a camera plate especially for 60D without vertical/battery grip (a different one is needed if using the grip)... 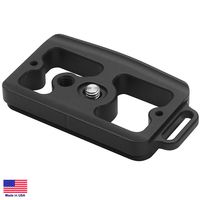 The Arca-Swiss style is the most versatile system of quick releases and especially useful that it allows some adjustment of lenses for better balance, but it does add some cost. You also could choose get a ballhead or tilt head like what I recommended that doesn't have a quick release, that simply screws into the bottom of the lens or camera. Use that as is or add a quick release to it later.

I basically use the same setup.  Like Alan, I have two monopods... one with a ballhead and the other without.  The top of the monopod often has a reverseable bolt.  Cameras use 1/4"-20 threads, but tripod heads use 3/8"-20 threads.  So the tripod and monopods usually have either a reverseable bolt or a swappable bolt (and come with both sizes).

For monopods, I prefer the flip-lock levers.  This is because if you're using a mono-pod, you're probably moving frequently and need fast setup/collapse times.  Flip-lock levers are faster, but they do require some "maintenance" (you have to adjust the tension on them so that when you flip them to the "lock" position, they've got enough tension to keep the monopod from slowly sliding down.  They usually include a tool that lets you adjust the the tension nuts (which are usually "nylock" nuts).  Before any important event, check the tension on the flip-locks.