My Photos Are So Large! Is this why I am running out of room on iPhoto so fast?! 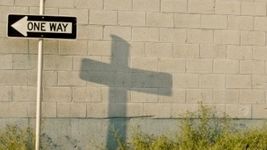 I just downloaded some pictures to iPhoto. Some were 3.5 MB and others were 6 MB 3456 x 5184 (even pictures that are right next to each other and are almost the same shot). Why is this? And is there a way to change the settings on my camera to automatically take slightly smaller pictures without significantly decreasing the quality or size so much? (to where if I want to go back to that photo down the road and do something different to it or enlarge it, I won't be able to, or it won't look as good)

It's getting the point where I probably have room for only a few more pictures on iPhoto. And I am HUGE into taking daily photos of my family! So the fact that I am having to keep my photos on my camera instead of being able to download and erase them, is really stressing me out! PLEASE HELP!

If you are heavy into taking photos in high resolution then he images are going to be large. Hard drives are fairly inexpensive and Apple makes it very easy to drag the iPhoto Library to a new location. I keep my photos on an external drive... just make sure you are backing them up because Apples Time Machine backup system does not backup external files by default (you can tell it to do this but it wont happen unless configured to do so.)
Tim Campbell
5D III, 5D IV, 60Da
0 Likes
Reply

TCampbell: I have a Rebel T3i. Eventually, when I do save up for an external drive, how would I go about backing it up? I am an eager learner, but I am no computer tech! Lol
0 Likes
Reply

The quick answer is, you buy an external hard drive formatted for use with "Mac" (the filesystem format for Apple vs. Windows is not the same -- while it's trivial to reformat a drive using Apple "Disk Utility" -- since you said you're not a technical person it's probably best to just get a drive pre-formatted for Mac.)  Connect it to your Mac and follow the prompts.

The longer answer is below:

Apple's newest Macs use "Thunderbolt" connections and also support USB 3.  If your Mac is older then it likely has "Firewire" connections as well as USB 2.  USB 2 is fairly slow.  Firewire, on the other hand, is very fast.  USB 3 is also very fast and Thunderbolt is BLAZINGLY fast.    So while any USB 2 connected hard drive will "work", the drive will be faster if it's Firewire (if you have a Firewire equipped Mac) or faster type of connection (such as USB 3 or Thunderbolt -- but ONLY if you have a USB 3 or Thunderbolt equipped Mac wich would need to be a fairly recent model.)

The first time you connect an external hard drive to a Mac, the computer will automatically ask you if you want to use it as a "Time Machine" backup disk.  If that's why you bought it, then just click yes and let it go.  The first time it runs the backup it WILL take quite a while (possibly several hours).  After it finishes, it will begin backing up your computer every hour (as long the computer is powered on.)  It auto-manages it's backups... you get hourly backups every hour for the past 1 week.  It then starts consolidating the hourly backups into "daily" backups every day for a month.  After that it consolidates the daily backups into "weekly" backups and it keeps as many of those as possible until the drive runs out of space.  When the drive runs out of space, it deletes the oldest backups to make room for new backups.

Here's an older video of when Apple introduced the technology:  http://www.apple.com/findouthow/mac/#timemachinebasics

A quick search (I used Amazon.com) found several external hard drives (these are drives with their own enclosures and cables).  The low priced options were about $65 for a 1TB drive.  I saw a 2TB drive for $80.  And of course... there are more expensive options as well.

You can get these drives in portable formats as well as desktop formats.  The portables are usually powered by the bus (USB, Firewire, or Thunderbolt).  They are also typically small, compact, and often times they do not have any form of cooling.  The desktop formats often have a separate power adapter (so they are not drawing power from your computer to operate) and are usually larger, roomier, and sometimes they have their own cooling fans.  The compact portable (e.g. "travel" size) external drives are not intended for extended use.  The desktop format external drives typically are intended for extended use (e.g. you could hook them up and let them run all day without a problem.)  The truth is the compact portable drives could run all day too... but they'll get hot and this will shorten their life.

It's also possible to buy replacement internal drives that are significantly bigger than the drive in your computer right now.  But this all depends on which Mac you have and whether you know a tech-savvy person who knows how to perform the upgrade.  Macsales.com specializes in upgrade parts (such as hard drives) for Macs and has a pretty database of all the various models and which ones can take which drives.  There are a *few* Mac models (mostly some of the iMac desktops) for which hard drive replacement is actually pretty difficult to do and not recommended.

Keep in mind I've talked about two different reasons for having an external drive and they shouldn't be mixed.

1)  External drives to give you more space for your important data (e.g. running out of space on your internal drive) and...

2)  External drives to 'backup' your data.

All hard drives (all storage really) eventually fails.  So it's just a matter of time before it happens to you.  I'm pretty religious about doing backups (but I've been in the industry a long time and have seen many many hard drives fail and many people lose their data for which they have no way to get it back.)

Since I'm a technology guy, my friends ask about those hard drive recovery businesses.  Turns out... "I know a guy" (I actually do).  But it's not cheap.  You're paying for some fairly specialized equipment and a skilled technician who will need to work on your drive and your drive only for probably most of a day.  You're paying this employees hourly rate and, since they're in business to make a profit, all the overhead and profit margins loaded into that price tag.  Basically he told me the price tag isn't straight forward because lots of factors go into it, but the total is never going to be less than $1000 (and it could be considerably higher).  You have to really want your data back to shell over that much money.

This is why I say the $65 external hard drive and the fact that your Mac has built-in backup software (Time Machine -- which is actually exceptionally good software) is really the cheap way to avoid ever being faced with the choice between losing all your photos or paying a pretty hefty bill to hope to get it recovered.

The photos are large because humans by nature want more.  🙂

Cameras with larger sensor sizes sell more, so camera manufacturers stuff as many pixels as they can on, even when dealing with small camera phones and whatnot.  It’s a good thing mostly, but there are some tradeoffs.  But I digress…

The intent is that you will “post process” your photos to some extent, using a computer program to crop/adjust/resize as necessary.  If you’re just sharing your photos online there’s no need for huge files.  You have two options:

1)      I’m not sure what camera you’re using, but yes, pretty much every camera allows you to take smaller pictures.  Look in your manual, or tell us what camera you have, it’s usually pretty easy.

2)      Use photo software (some most likely came with your camera) to edit your photos, and then resize them for upload to iPhoto.  It takes more work, but the results will be better than letting your camera do it, and you can choose to crop out pixels you don’t need to make a better shot.

Skirball: So basically, if I went with option 2, I would first have to install the software that came with the camera. Then how would I go about downloading them to it? And then, furthermore, sending them to iPhoto?
0 Likes
Reply

Size of a file depends on its content. An image of a gray wall with no texture will be much smaller than the image of colorful flowers. I don't know your camera model, but every camera has a setting for JPG. For Canon, it's LARGE, MEDIUM, SMALL1, S2, S3. See what setting it is on right now, change to a lower setting, take some photo see if it is still good. Then down size once more, shoot some photo, check again. Do that until you get the smallest file that you're happy with the quality.

But JPG is "small" in general already. So if you buy a good camera and only use the smallest setting then it is a waste. Also, if you decide to crop the image later, it is going to be hard because you don't have a large file to begin with. A 500Gb external hard drive for $50 can store about 25,000 photo at around 5Mb each. So if every day you take around 70 photos, then it takes a whole year to fill up that drive. Don't throw away data.

Hsbn: Thanks so much for all the helpful and detailed information! I have a Rebel T3i. Buying a drive would be my absolute first choice!!! But i don't have a spare penny right now 😞 That is why I am desperately searching for a (free) alternative to buy me some more time while I can save up for a drive. Which will probably be a while! Is there anything else I can do in the mean time??
0 Likes
Reply

Anyone: And is it possible to resize the images already in iPhoto (preferably resizing a large group at once, vs one-by-one) to create room for more photos??? Or would that be a bad idea seeing as how hsbn mentioned that JPG's are small to begin with? Would I risk messing with the quality of the photos or editing possibilities later?
0 Likes
Reply

Software and post processing is the answer. The suggestion of, since you have a great camera, to not throw away data is spot on. You know, why buy a Rebel T3i and us cell phone settings? Pretty lame, right?