I recently upgraded to an M1 iMac with MacOS Monterey (12.3.1). The printer (a Canon TS8320, WiFi connected) continues to work (print) fine, but it seems as if the application doesn't recognize that it's capable of duplex (two-sided) printing. According to Canon, this printer is compatible with Monterey (the TS832x series). Is there some setting/preset somewhere that I'm missing? It used to work under Mojave (my previously MacOS version), but now only prints single-sided.

The PIXMA TS8320 is capable of printing on both sides.  This feature is enabled in the Print dialog box: 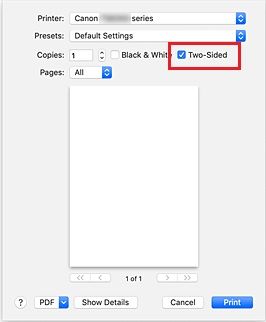 Patrick, I think you've sized it up pretty well. I was aware that the TS8320 was using Apple's AirPrint, and that the duplex option was presented by the application in the Print Dialog. In this case, the application is PrintShop (by Mackiev, used for printing greeting cards, which have an 'inside' and an 'outside'), but the Print Dialog does not include a Duplex option, so it treats the printer as if it were capable of single-sided printing only. Fortunately, a workaround is to print one side of the card, manually flip the paper stock, and print the other side.

Funny thing is, this used to work under Mojave (not sure - may have been Canon's proprietary print driver) and a previous (32-bit) version of the application, PrintShop. So it could be an application issue, or possibly an issue between the print driver and the application. I'm going to play around with the Paper Layout options (which do include a Duplex ON/OFF setting) and see if that makes a difference. If not, then like I said, at least I can print both sides of a greeting card using the workaround described above.