DPP 4.9.20.0 "Use graphics processor to speed up preview display" has no checkbox

In DPP 4.9.20.0 (and previous versions), "Use graphics processor to speed up preview display" has no checkbox. 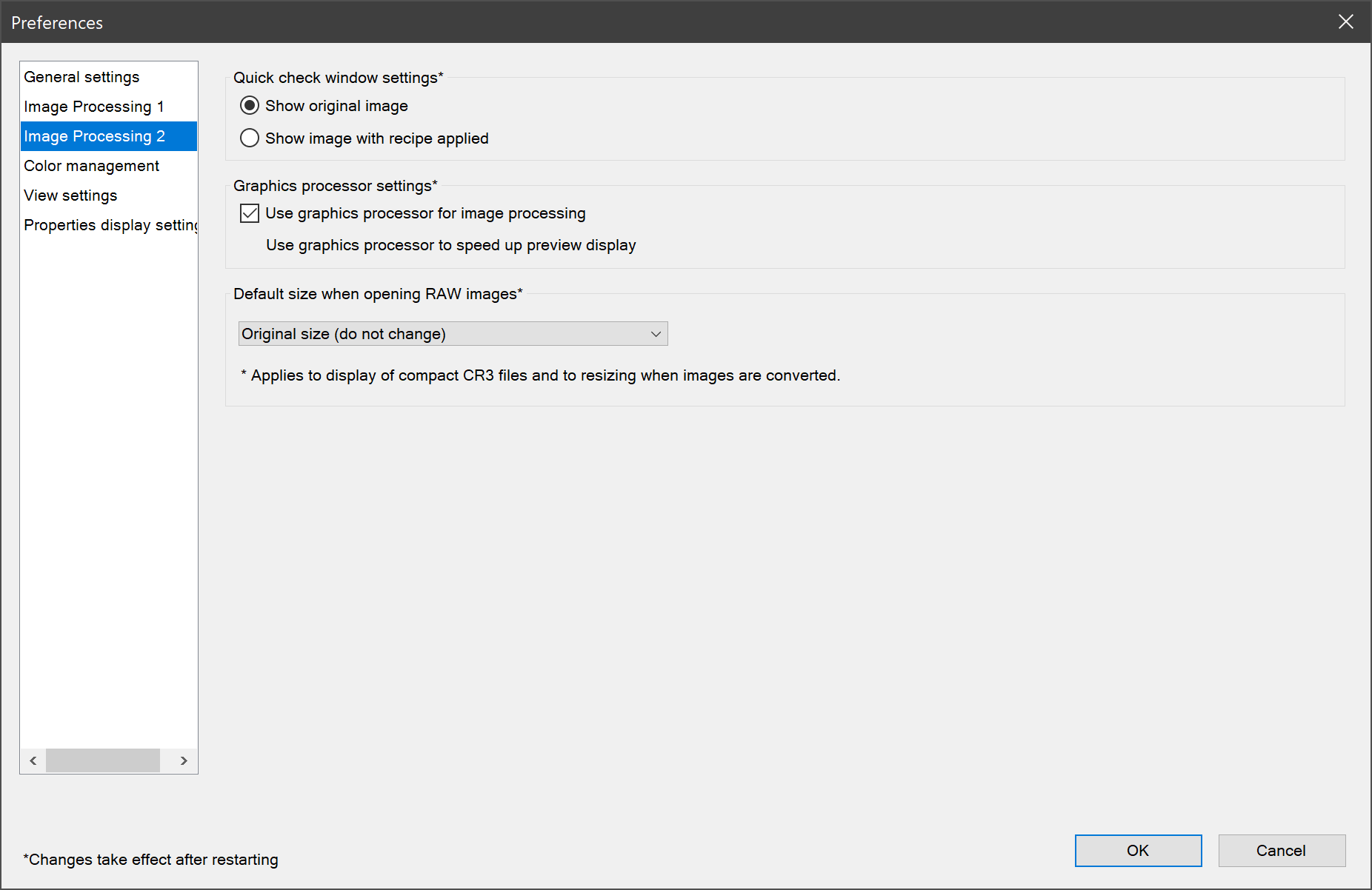 The option to speed up previews will be enabled when you enable a GPU. You do not have an option to disable it during previews. In fact, that is all the GPU does.

But, that is not the only benefit from using graphics card. The main benefit comes from having separate video RAM. The CPU runs faster when it does have allocate a share of System RAM as video RAM.

The option to speed up previews will be enabled when you enable a GPU. You do not have an option to disable it during previews. In fact, that is all the GPU does.

But, that is not the only benefit from using graphics card. The main benefit comes from having separate video RAM. The CPU runs faster when it does have allocate a share of System RAM as video RAM.

So what you suggest is that all the text belongs to that one checkbox.

I have tested with and without GPU enabled but see no difference in processing speed when it calculates accurate image previews.

Also, as can be seen in the screenshot below, the GPU seems to completely idle while a preview is beeing made, or when the image is beeing tweeked. Though I'm not sure which parameter to monitor, in Adobe Raw there is activity.

Actually, when exporting, also no significant GPU activity can be noticed, but the CPU is at full load. Which is a good thing in the way that it uses all the cores. When previewing however only 1 CPU core is used which slows down the previewing process also. 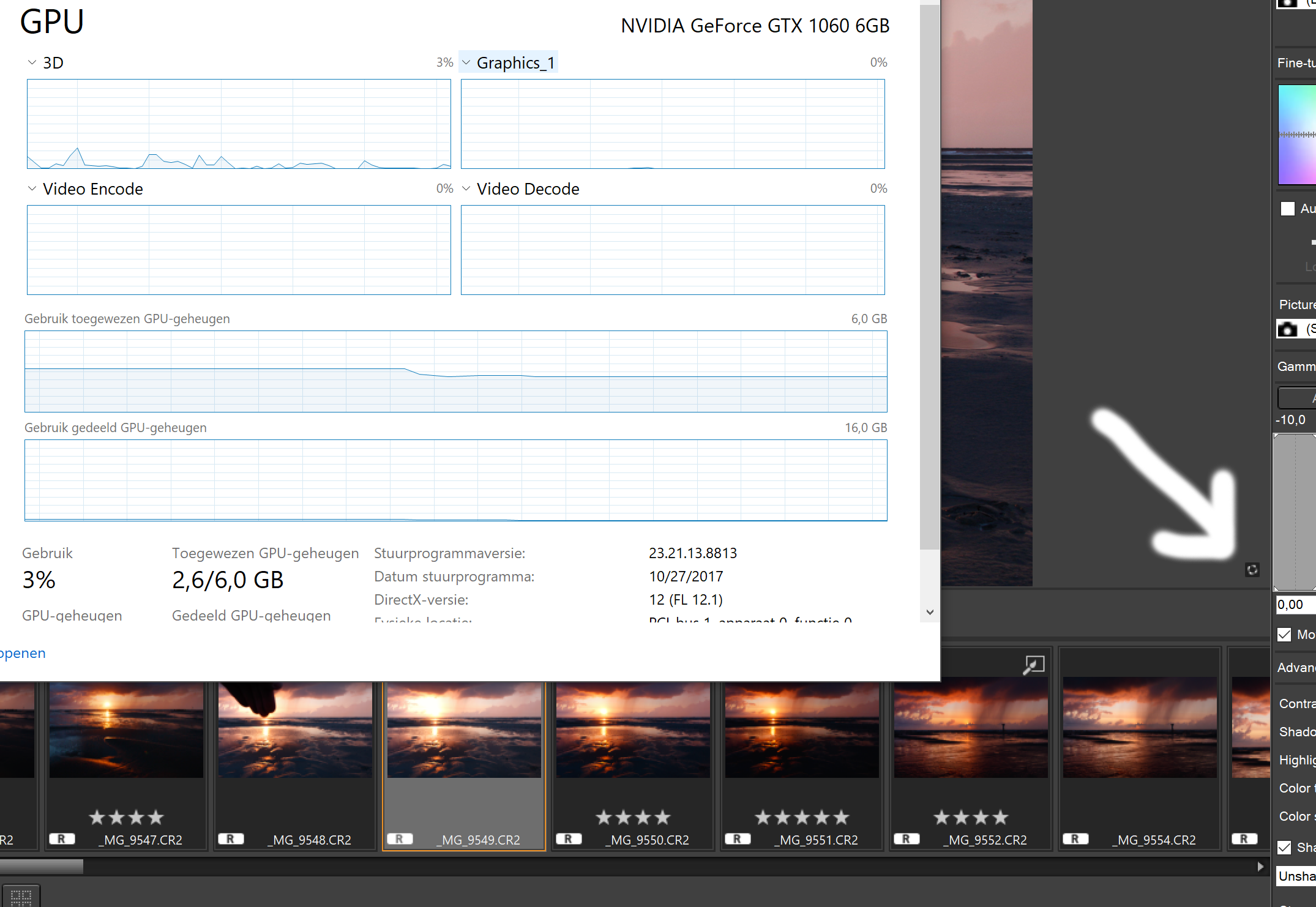 What operating system are you using?

Some graphic cards have a utility that you must configure to allow which applications use it, and which do not.  All NVidia cards have a version of the utility.  Your display appears to show the 3D performance, which is not used for resolving stills.

This video shows a file loading in about 2-3 seconds, instead of the current 10-15.

I have not used DPP for over a year, and I am surprised to see that performance has degraded in the latest releases.  I forget which DPP version that was, but the date on the video shoul be a good hint.  DPP no longer loads previews that fast, and those files were stored on a network drive.  Local files would load even faster, or they used to.

Like I said, the main benefit from using a graphics card comes from the CPU not sharing system RAM with the video chips.

Thanks, actually the loading in the video takes 7 seconds (for the full quality preview). Note the loading icon next to the right bottom of the image. That is about the same as what I get on a 4k resolution with an 18mp photo. Though, it varies quite much per photo.

Loading times become a real problem with higher resolutions. Adobe raw is lightning fast in comparison. However, the color and highlight reproduction of DPP is unprecedented. I hope Canon will not give up on their software.

Long story short: DPP is not using the GPU, thus I'd hope for answer A in my initial question (Canon is working on it) 😉

I've kind of been up against the same brick wall recently trying to speed up DPP4 in Win7. Spent way too much time looking at this same screen over the last couple of weeks as well as the nVidia control panel screens.

New graphics cards are still too spendy thanks to the crypto-currency miners. But a friend at a local computer store fixed me up with a decent deal on a used nVidia card and a big ass power supply out of a gaming rig he parted out. The card, a GeForce GTX 285, had 240-some Cuda cores and 2 gig of RAM which seemed to meet or exceed Canon's minimum requirements.

Yet try as I may, I could never get DPP4 to recognize the GPU. Installed the latest drivers from nVidia and even updated to the latest version of DPP4, but still no go. So I dug in again to the DPP4 user's guide and on page 131, in a footnote, I spotted a note that stated that the GPU requires "Compute Capability 2.0 or higher" to use this function.

Well that was a specification that I'd never heard of before and neither had my friend who'd supplied me with the card. So I dug back into the specs for the GPU, which nVidia kind of had hidden on their site, and what do you know. This card only had Compute Capability 1.3, whatever the hell that actually means. So I've stopped banging my head on my desk for the time being and will probably keep looking for a slightly newer used 2.0 rated GPU.

At least I've still got DxO OpticsPro 11 to fall back on, and the more I use it the more I like the results I'm getting. And I'm spending a little less time getting them even without a fancy graphics card.

I looked this up now as well, thanks for pointing that out.

My GeForce GTX 1060 (6GB) has a 'Compute capability' of 6.1 according to this page: https://developer.nvidia.com/cuda-gpus

So the problem seems to lie elsewhere. I checked the "Compute_0" and "Compute_1" activities in the task manager but nearly nothing is happening there as well. So DPP is not using the graphics card at any point, even though my PC should have all requirements.

I am using a GTX 1080 and DPP 4.9.2 isn't utilizing the GPU either.  Nvidia shows a compute capacity of 6.1 for this GPU which certainly meets Canon stated requirements and the GPU activity monitor shows that DPP is running on that GPU but utilization will show a maximum of 1% on the GPU monitor with no perceptible change in performance with the GPU checkbox marked or left blank in DPP.

Performance is OK with 1DX 2 RAW files (typically about 5 seconds for the activity indicator to disappear with a high ISO file with lens correction brought up into the edit window) but it should be better if it was properly utilizing the Nvidia card.  This is in a HP Z series workstation desktop with dual Xeon 8 core processors and 64GB of RAM per processor.

On Edit:  The only thing I can really see DPP doing with the Nvidia card is it grabs some GPU memory but with system RAM utilization sitting at under 3% running DPP and several other programs this really doesn't make a difference.  It would be nice to see DPP actually exercising the processing capability of the GPU.  Running render with Corel Video Studio, GPU activity jumps to 40-45% and stays there until rendering is complete so the card and operating system are doing their thing.

It probably isn't helping that I'm comparing my findings in Win7 to your findings in Win10. So far at least, in Win7 Task Manager I'm only seeing a performance graph showing the onboard CPU and RAM usage. And the whole layout looks quite different to what appears in Win10. I've yet to see anything showing activity on the GPU.

Not sure if I'm not looking in the righrt place or if Win7 just doesn't show as much information in Task Manager as Win10. My GeForce card is at least working to the degree that its fan runs and it supplies a signal to my monitor.

I can't recall if Task Manager showed GPU performance when Win 10 first came out, I think it may have been one of the revisions and Win 7 likely didn't get the revised task manager.

Google HWinfo for a very good free program that will provide excellent information about your system including real time data from all of its monitors.  It will indicate utilization and temperature of the GPU along with fan speed of your board; it also provides full data on the utilization and temperature of the CPU(s).  Among other things it will show you, via increasing temperature, when it is time to open up your PC and clean the radiators for your CPU.