Camera on Av (5DMiii) speedlite pointed up one click off vertical and bouce card ( came with camera) deployed.

subject in shade so want to minimally illuminate face and have eyes bright. was on 2.8 with the 24-70 Canon lens.

Didnt seem much different.  Does the camera when on auto put out variying amounts of light so that picture is same? Histograms were very similar.

I want less light.  I guess I need to know what exactly is happening when on auto or must shoot manual;

Thanks in advance for helping an old print guy with all the new digital stuff.

Are you saying that you're getting too much flash?  And you're using FEC, not exposure compensation?   FEC -3 should be considerably different than 0.  But I'm surprised that you're getting too much flash purely off the bounce card outdoors - if anything I would have thought it isn't doing enough to see the difference.  In which case, you're not going to see much difference using FEC.

With flash on Av the camera should be in fill flash mode.  So it will exposue the ambient without the flash and is controllable through exposure compensation.  The flash is controlled through FEC, and should be completely separate.  That said, if you're having trouble getting the results you expect start by using your camera on Manual and play with eTTL.  I prefer shooting that way anyway, but at least use it for troubleshooting.

No I'm saying that they all look extremely similar (viewing historgrams as well as my eyes in live view)) Flash Exposure Comp - assusme you mean the setting on the 600 speedlight.  Camera is set for flash in the WB section. I just went out and did another.  Tripod; 1/30 100 ISA (cause old print guy); F5.6 ETTL  -1 , M(iddle) +1; 24-70 lens.  The +1 was darker (and histo showed it); batteries are charged and gave it time to recycle.

In the olden days we had paper dials we had to make to set our old vivitar 283s for fill, off camera.  The 600 just didnt seem to perform as I expected automatically.

All I really want is to brighten a girls face a very small bit.....and have the "sparkle" in the eyes that fill flash provides..and have it consistant....I just found it strange that regardless of the setting (-1, -2. -3 etc there was not that much different.

On back of flash it should 24mm ahd had a radio symbol, (have no idea what they mean right now..

No I'm saying that they all look extremely similar (viewing historgrams as well as my eyes in live view)) Flash Exposure Comp - assusme you mean the setting on the 600 speedlight.

That what I assumed but you said "I want less light", so it was confusing.

Flash Exposure Compensation is both on the flash and camera, but you can control it from the flash if that's easier.  But I don't think the flash is doing anything at all, hence all the shots are the same.  The bounce card really only adds a tiny bit of light on the subject, mostly it creates spectral highlights.  It's not going to fill light your subject well outdoors (indoors most the light bounces off the ceiling, only a little comes from the card).   But lets start simple:

Use manual exposure mode (for now), those settings you listed are fine, just make sure it makes takes a shot a couple stops underexposed with the flash off.  Take a test shot.  Now turn on your flash, on eTTL, and point it straight at your subject. Take a shot.  Your subject should be much lighter, if a little harsh.  Now move the FEC down a stop or two and the difference should be obvious.  If not we need to troubleshoot this.

Once you get that set, now do it in Av.  Use exposure compensation to set the ambient exposure a stop or two underexposed and use the flash as before.

Once you get that, now practice with light modifiers.  If you don't have any you can make a simple bounce reflector with some white cardstock/stiff paper and a rubberband (hair ties work great).  Something like this: 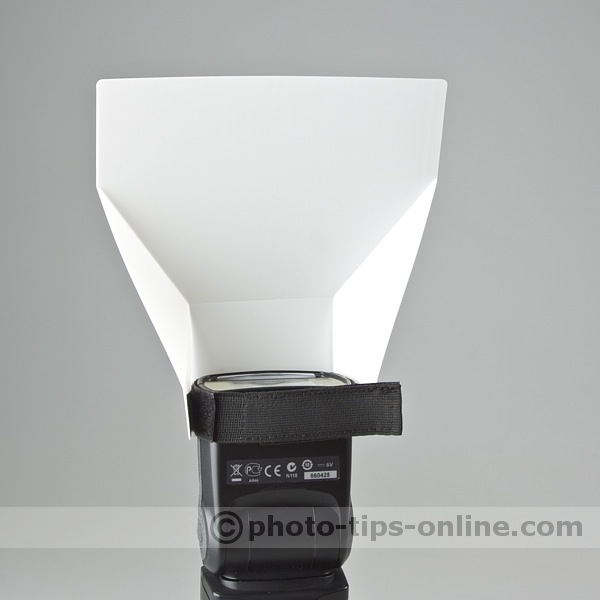 sorry for no reply as had to go to see elderly parents....will work on this again; been reading...may have to remeber to set high speed sync also (been reading up a little when on trip)