EDIT ON THE BELOW
After a little bit more fiddling and messing around with settings I switched over to maual flash mode and have found that the sync issue only occures when using the built in ETTL mode!
I shall keep at it until I have figured out the issue!
ORIGINAL
Hi all!
I'm having a bit of a frustrating issue plaguing me! I have a canon 580ex ii that seems to be out of sync with my 7d mkii in some way.
When I take a shot the speedlight fires but the camera does not capture the flash, the exposure stays the same for the shot with flash and the shot without. It feels almost as if there is a timing issue.
I have tried 1st curtain, 2nd curtain and Hss all set to 1/250 as well as 1/200.
I have tried factory resetting the flash as well as the camera.
I have tried multiple ISO/shutter?aperture combinations.
I have turned off red eye reduction as apparently this also causes an issue sometimes.
It was working fine until a few days ago. Also related to the flash and probably related to the issue is that it sometimes does not register that batteries still have charge when in fact they are still full! Only putting the batteries in the charger and then back in the flash causes the flash to work again.
Many thanks if anyone has any info on this issue?
Me too
0 Likes
Share
Reply
1 REPLY 1

You need basic understanding of how the Speedlites and ETTL are designed and intended to work...

If you set the Speedlite to ETTL/ETTL II and set your camera to manual exposure mode (M... without Auto ISO), the flash will fire FULL. The flash fires a pre-flash (1/64 power) that the camera measures and they use to determine a correct exposure, then fires the actual flash at the appropriate output to fully illuminate the subject. These two pops of the flash happen so quickly that it often seems like a single one. The camera ignores ambient light conditions (for the large part), as if only the flash were providing all the illumination. For all practical purposes, this is another AE mode, even though the camera is set to M (without Auto ISO).

In both modes, you can dial flash power up or down using the dial on the rear of the flash.  This is called Flash Exposure Compensation (with many cameras it also can be set via the camera's controls... it's the same as Exposure Compensation you might do when shooting without flash, except that E.C. only applies to AE modes, not to M.)

So it can be as simple as changing your camera exposure mode setting, to switch between FILL and FULL flash. In addition, you can dial either of them up or down as you see fit, and you can make adjustments to control how much or how little ambient light will be included along with the flash.

For this photo of a praying mantis, I made the flash the primary light source and minimized how much ambient light would be recorded, in order to make a busy background close behind the subject go completely dark... 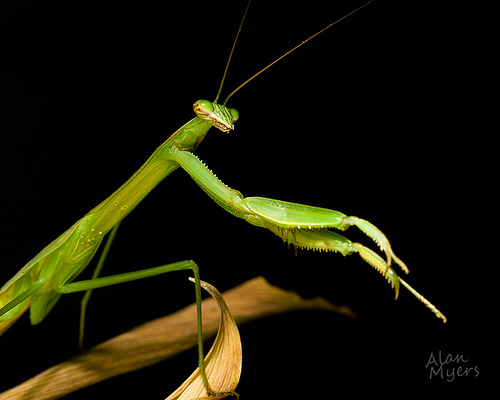 While for the shot of a hummingbird below I set up the exposure to record a lot of the ambient light along with the flash, so that the background would remain (I didn't use HSS here, because the flash fires at a very short duration, typically like a shutter speed of 1/720 or faster, helping freeze rapid movement... in this case I used a Flash Extender, see below for more info): 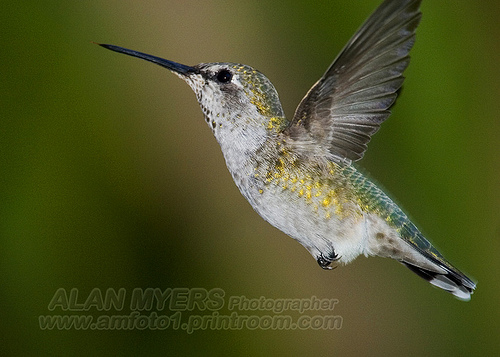 HSS or High Speed Sync lets you use the flash with shutter speeds faster than the camera's sync speed (1/250 with a 7DII). The duration of the flash is shortened and timed to the shutter. This causes the flash to have much less "reach". The faster the shutter speed, the less distance the flash will be able to illuminate. I am pretty sure the distance scale on the LCD on the back of the flash will reflect the effects of HSS, so check that and see if you'll have enough distance for fill or full flash, depending upon how you're using it. (If you have trouble judging the distance, focus your lens and use the scale on it to determine the approx. distance.)

With telephoto lenses, a Flash Extender can help increase the reach of the flash, whether using HSS or not... But especially helpful when using HSS! Flash Externders position a Fresnel lens in front of the flash to concentrate the output. But this narrows the flash's coverage considerably, so can only be used with 300mm and longer telephotos on full frame (200mm and longer on an APS-C crop sensor camera).

2nd curtain sync is used with slower shutter speeds, particularly when using flash as fill or mixed with ambient light, so that the natural light trails, shadows and any "ghosting" effects of the flash will appear behind the subject, rather than in front of it (making it appear to be moving backwards). Again, this is normally only used with slower shutter speeds, well below the synce speed of the camera.  Here's an example where you can see the effect. In order to have some motion blur in the background and the faster moving legs of the horse, but have the rest of the image sharp, I panned and used 2nd curtain sync while "dragging the shutter" at 1/30: 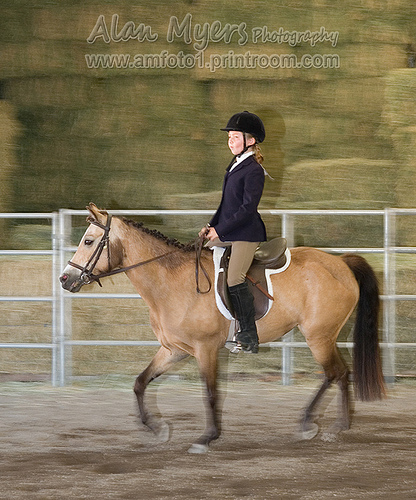 Of course, it also is fine to do what you did... switch to manually controlled flash. Might be a little tricky to determine your exposure initially, so you may need to do some test shots and make some adjustmetnts. One way to arrive at accurate exposures more quickly and easily is to use a separate, handheld flash meter.