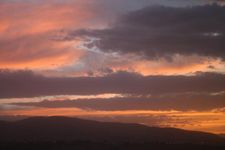 I throughly enjoyed yesterdays experiance and part of my expericance was taking pictures with my camera and also with my camera mounted on my 8" Schmit-Cassigrain  telescope.  I had about a dozen family and neighbors in my driveway during the event and everyone enjoyed looking at the eclipse through my scope.  We are in Warrenton, Va and experianced 82.7% but didn't get to see the end as the storm clouds moved into the area with about 30 minutes to go.....bummer but what an event.  I can't wait until 2024!!

Here are two of my favorite shots I took.    The first is a shot using my 75-300 EFS lens zoomed all the way in and manually focused. The second  one is through my scope (Dang-it, I should have bought that focal reducer).   Both shots were in manual mode.  I probably could have messed with the setting more but I just wanted to get some shots and also enjoy looking at it thrugh my eclipse glasses.  I made all the solar filters for my camera lens and telescope using Thousand Oaks Optical 12"x12" mylar solar filter sheet. 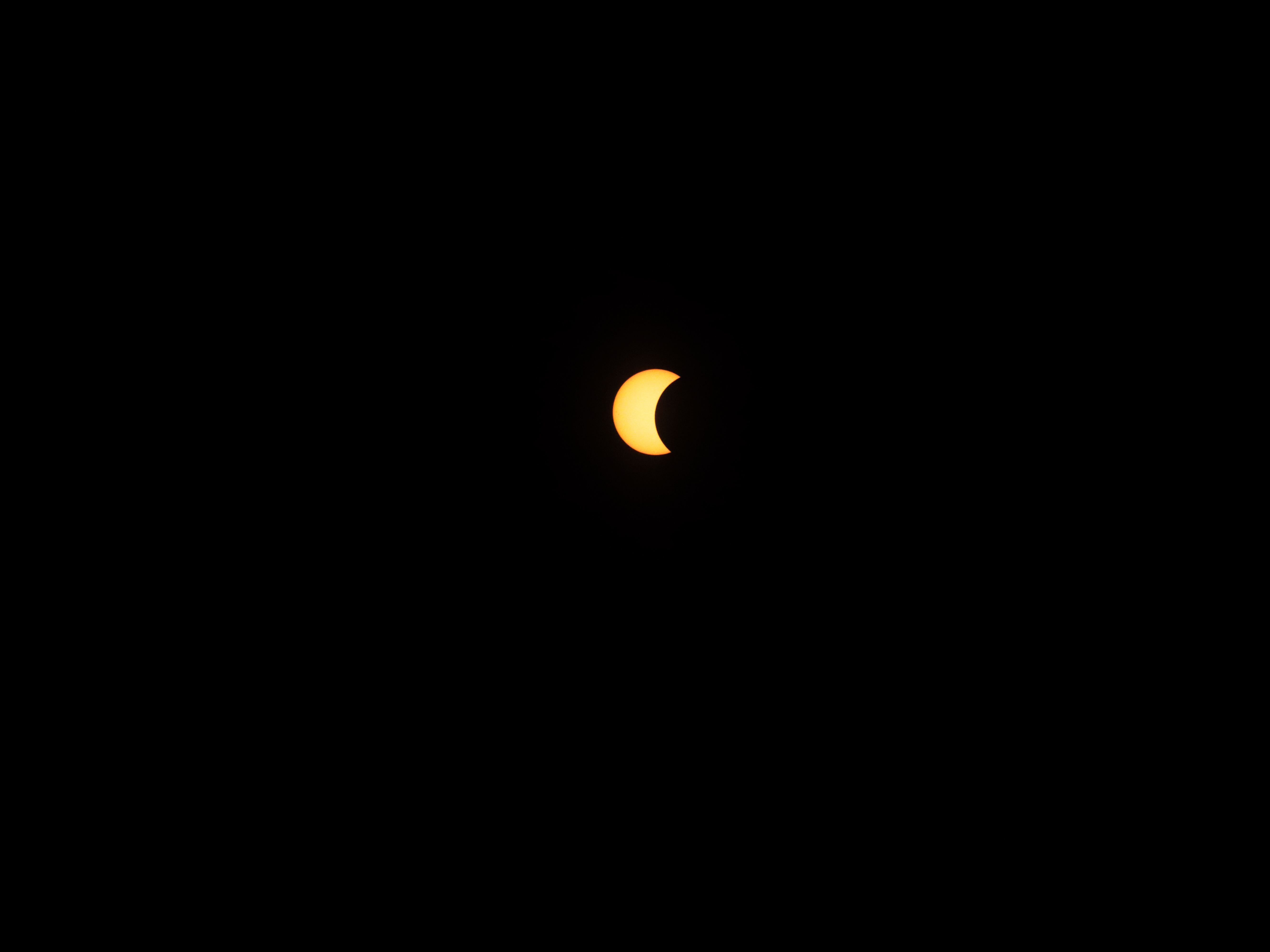 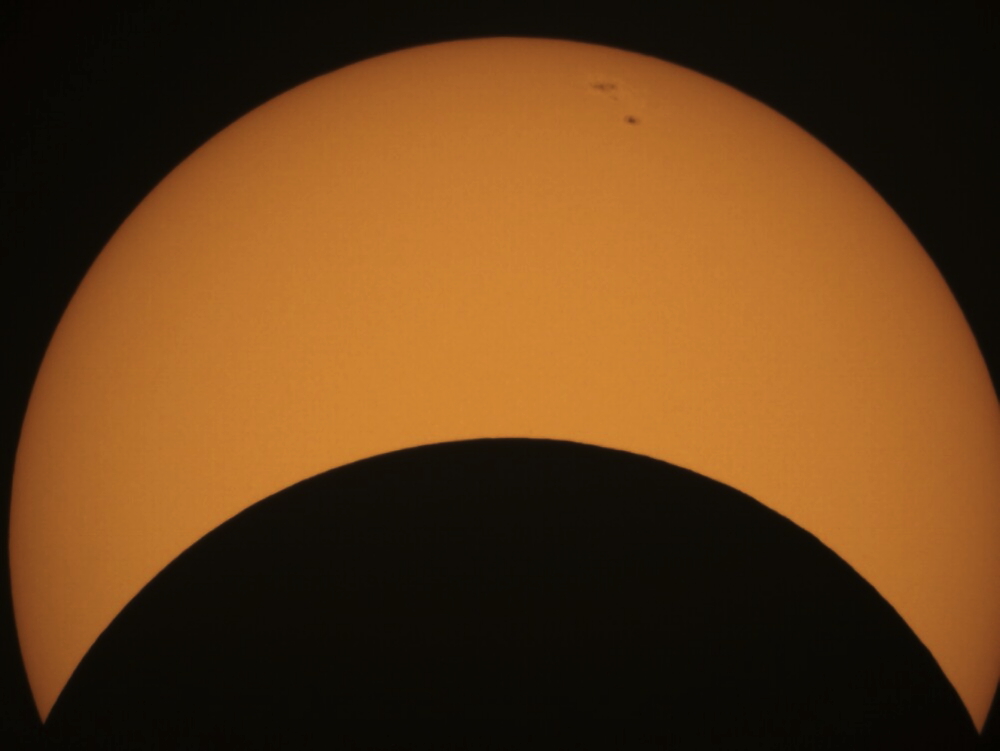 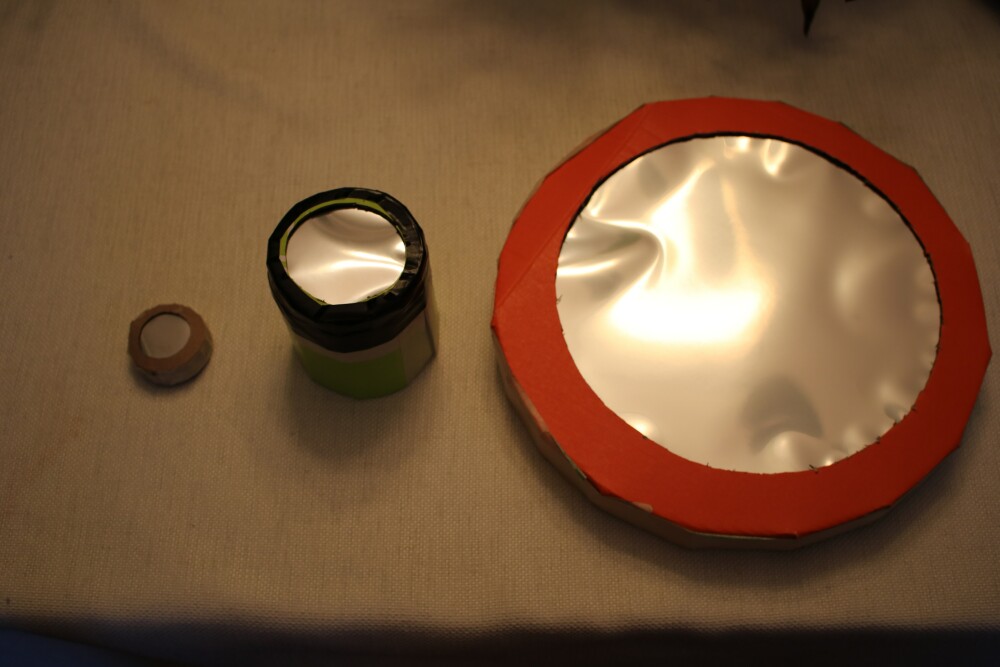 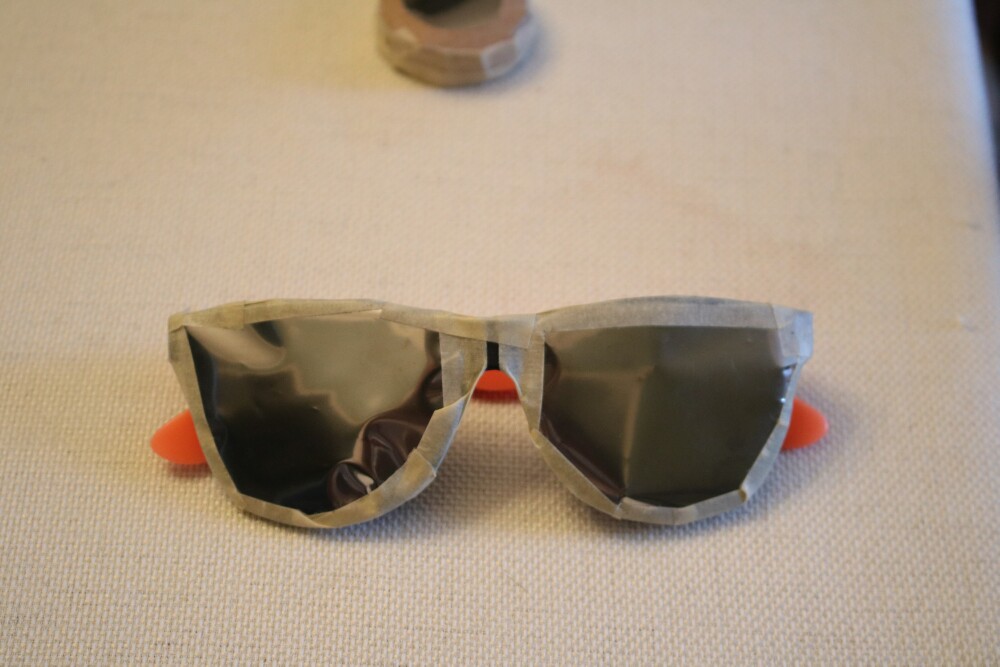 It's always more fun with friends.  I'm glad to hear you had good weather and a great time.

I traveled to Casper Wyoming to view it from totality.  I could have found a closer location but weather would have been a gamble and I was hoping to improve my odds.

I did get some shots (ok, actually quite a few), but I'm on my iPad (the images are on my laptop).  I'm still driving home (about 1400 miles) so I'll post them once I get a chance.  I shot heavily bracketed sequences to capture the extent of the corona, prominences, etc.  but that will need some processing to put all those together.  Quite a few singles look good without any processing.

Wow Tim, you sure are dedicated to drive 1400 miles.  I was a little closer to totality but with kids in school and work I couldn't find the time to drive to South Carolina.  Maybe in 2024!!!

Please share your shots as I'm sure they are spectacular.

If it's only an hour's drive, you can wait for the weather forecast and then decide whether and where to go.

At my age everything depends on still being around in 2024. I was at the 1963 eclipse, but the clouds rolled in just in time to blot it out at totality.

We were nearly in ground zero

but it was cloudy and raining.  OF COURSE !  I didn't even set anything up as the forecast was made several days ahead and it was spot on.

I did catch a few breaks (a camera is always close at hand) in the angry clouds with some interesting results and colors. 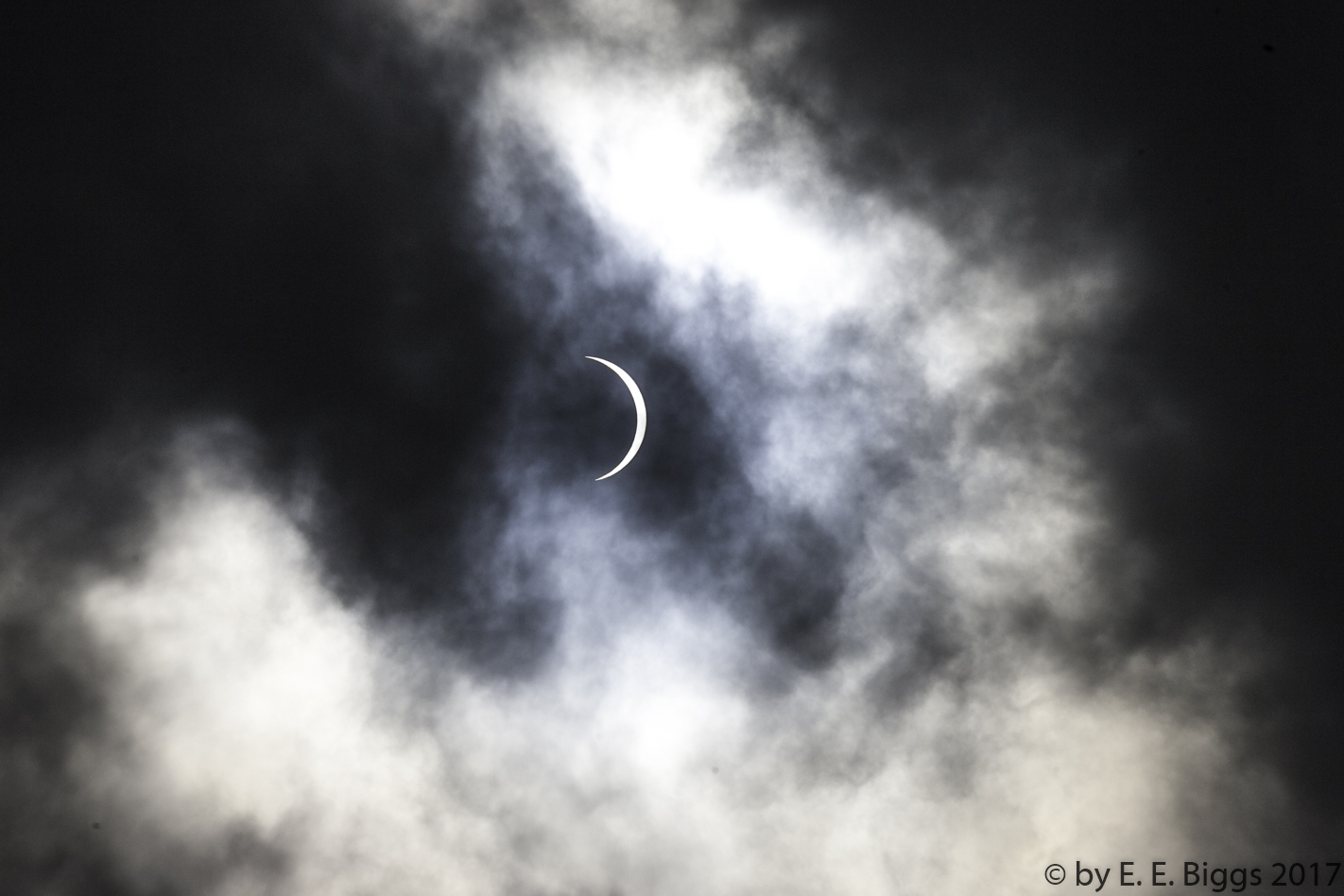 Thats a dramatic shot with the clouds.  A t-storm rolled in for the last 30 minutes of the event and the sky closed up on us too.  I have a few shots with the clouds.  It's just nature doing her thing in the heavens and on Earth.

Here are a few of my eclipse shots.

Near Corona with Chromosphere Prominences 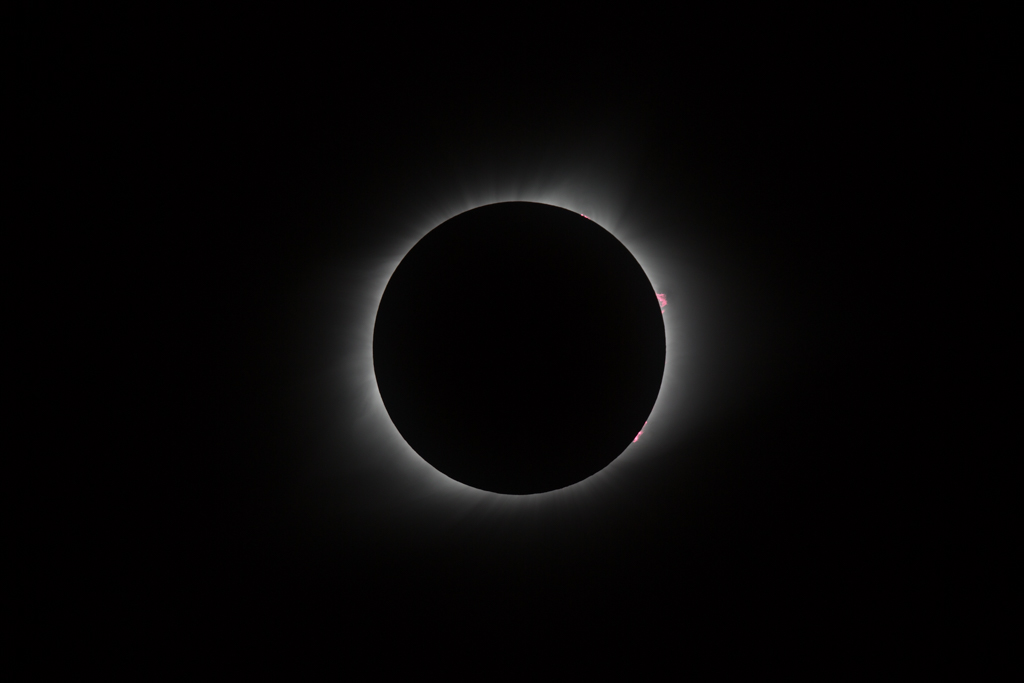 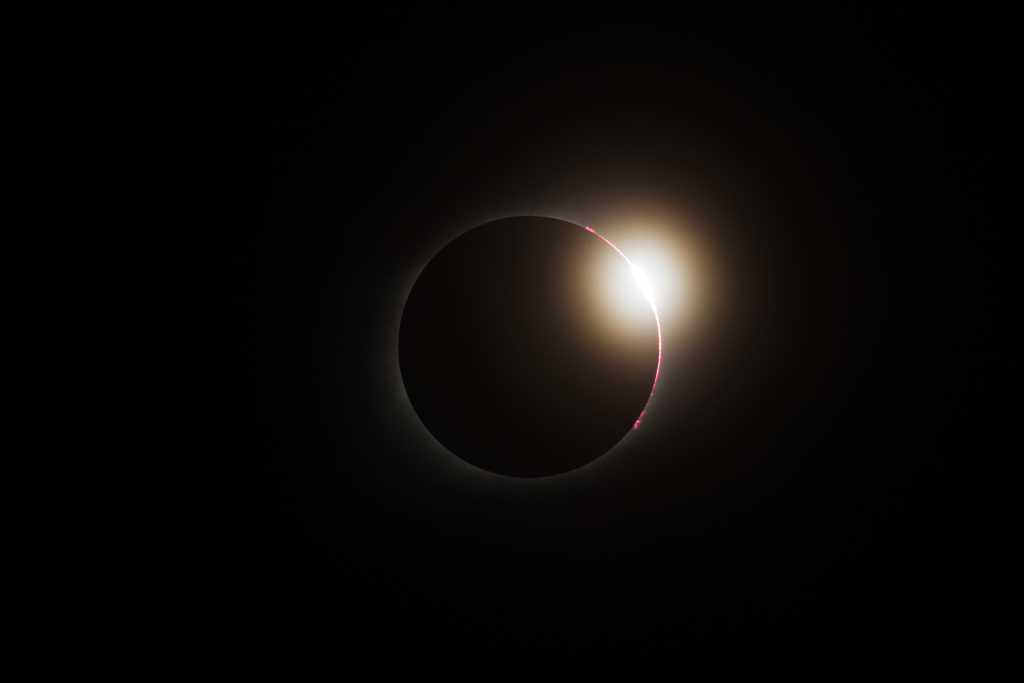 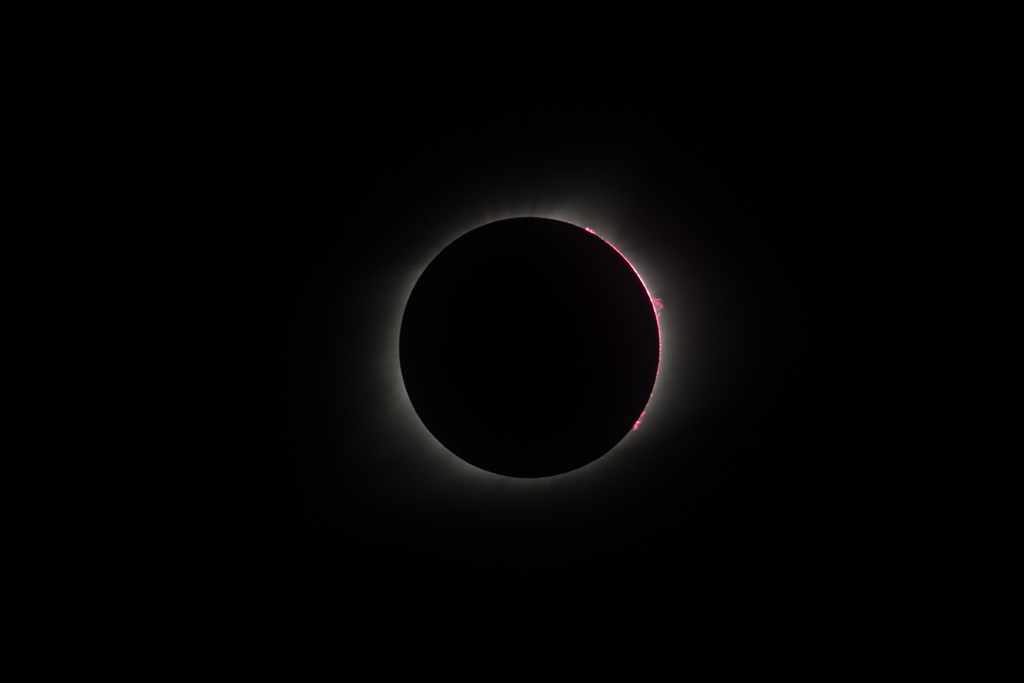 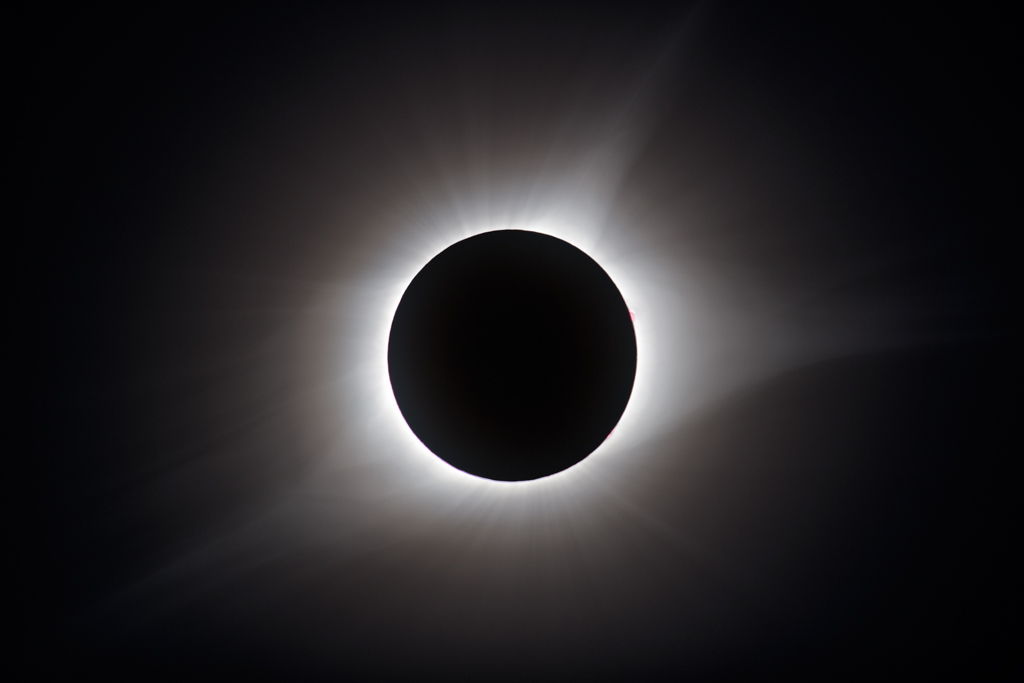 These shots were taken with two different cameras.

Image acquisition was handled via Solar Eclipse Maestro (by Xavier Jubier) which handles the precise timings and for each shot and scripts the exposure changes required to each camera.

EDIT:  I originally used the HTML to use embedded images from my Flickr album, but noticed that the images vanished for a day, then re-appeared the following day.  I'm not sure if that has to do with how Flickr deals with the files... so I removed the embedded links to Flickr and replaced them with actual inline images. 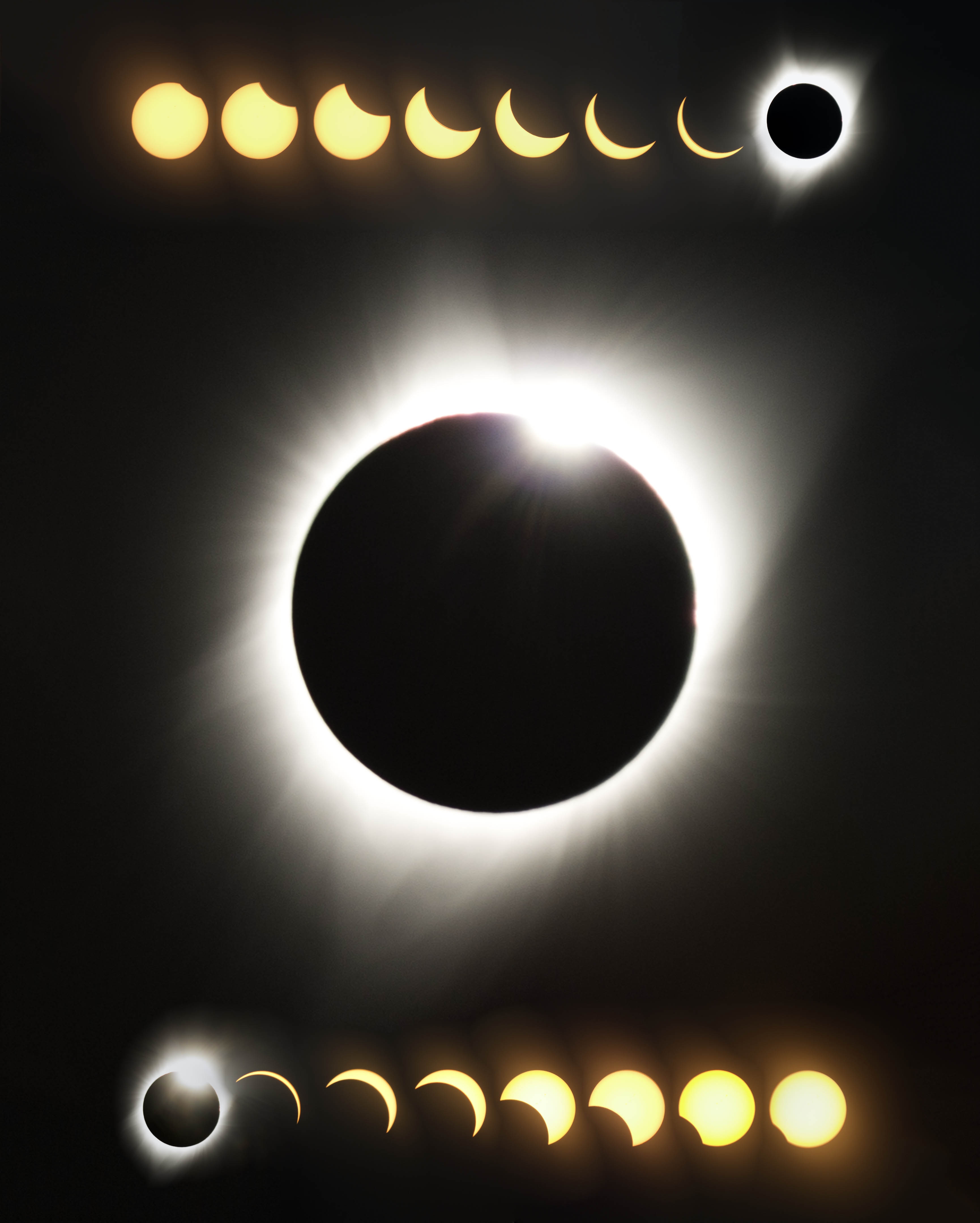 Frustratingly I saved the JPEG but not the PSD so I need to re-do this. In particular, the penultimate image of the sequence doesn't match the others. I'm not ecstatic about the way that Photoshop merged the layers, but I spend half an hour trying to do a better job and failing miserably so eventually I gave up.
Canon 70D with the kit 55-250 lens. Filter was a kids solar viewer strip taped over a 58mm mounting disk. Think I ws shooting 1/40 f5.6 iso 100.  I'd have to look up the exposure for totality. I wish I'd had the presence of mind to try higher speeds, but all I could think at the time was "holy [expletive] this is amazing". Shot from Salem, Oregon.