This was the second Friday night football game I shot this season.  The field lighting was very poor and there was light rain off and on but it was still a very fun evening to be on the sidelines with the first hint of fall in the air.  Last season my daughter was kicking for her team but she transferred for her senior year for access to more AP classes and to work with a university prof on her research so with sports governing body transfer guidelines which discourage transfers she is in the stands instead of on the field during football season.  I am probably a little more relaxed shooting football with Anna safely in the stands until soccer season arrives but I do miss seeing her on the field 🙂

For these very poorly illuminated HS fields, I use a three camera setup with fast primes on all bodies.  Next Friday I will be back to an easier to manage dual camera setup using the 1DX III with EF 400 f2.8 and 1DX II with EF 70-200 f2.8. 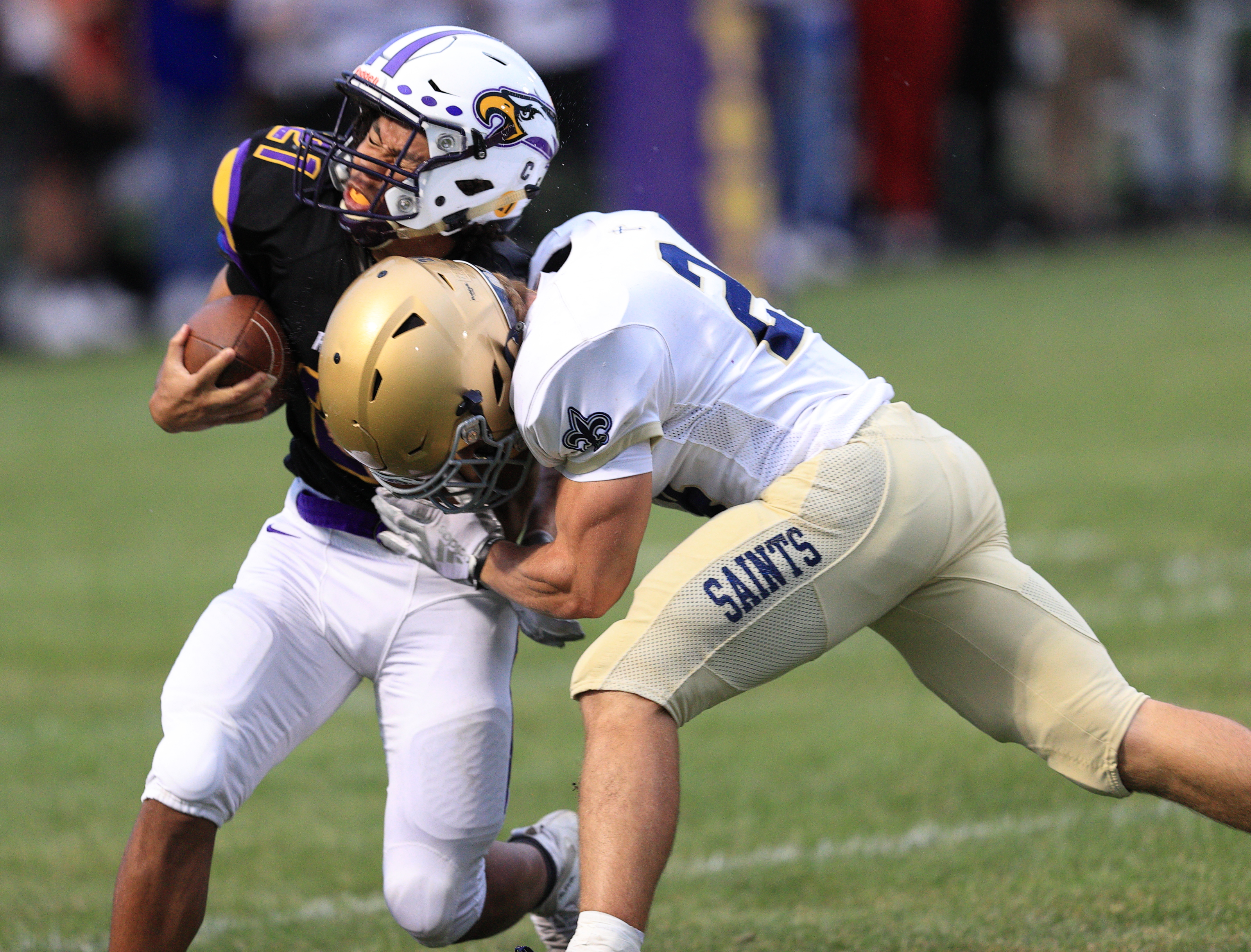 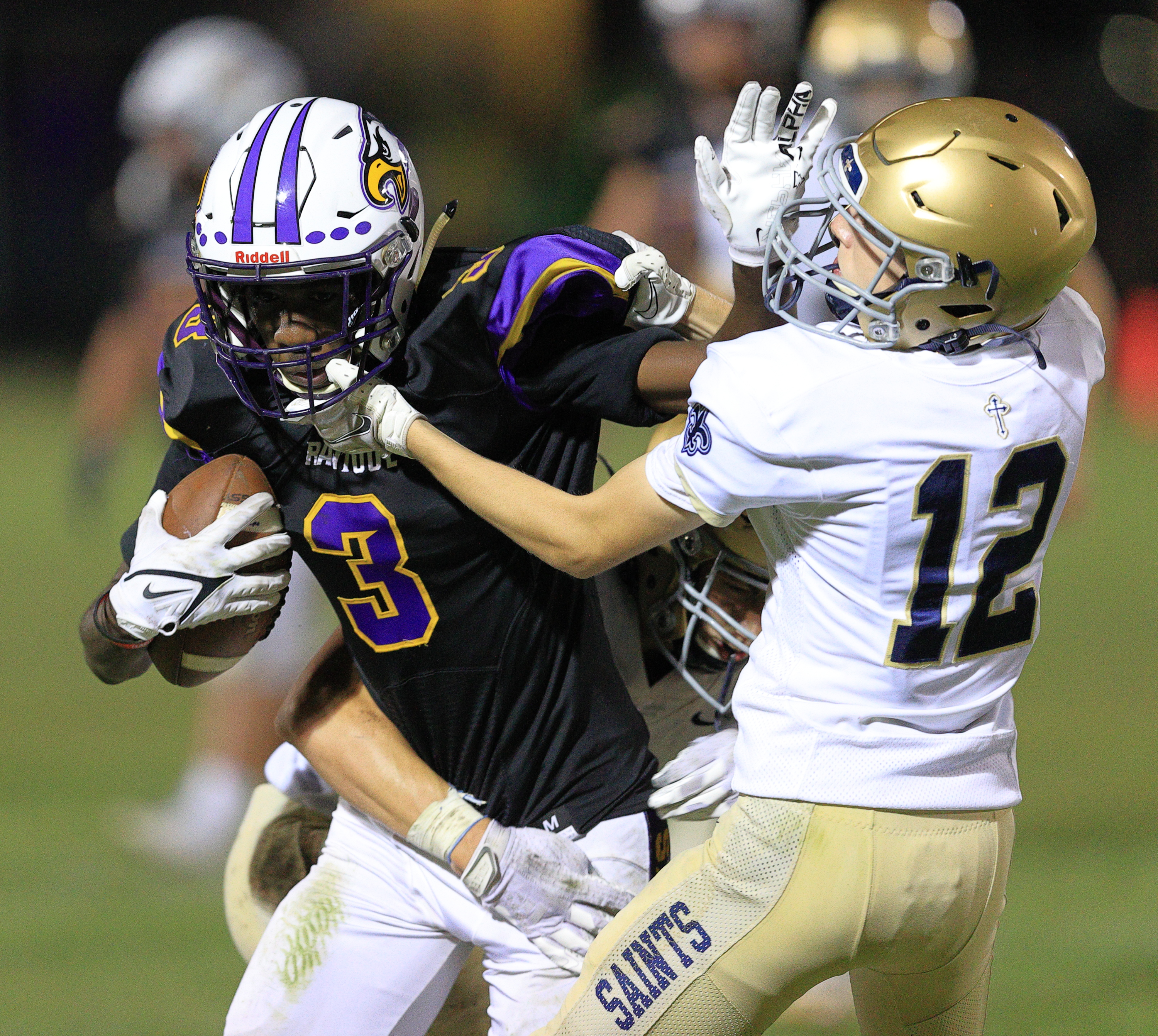 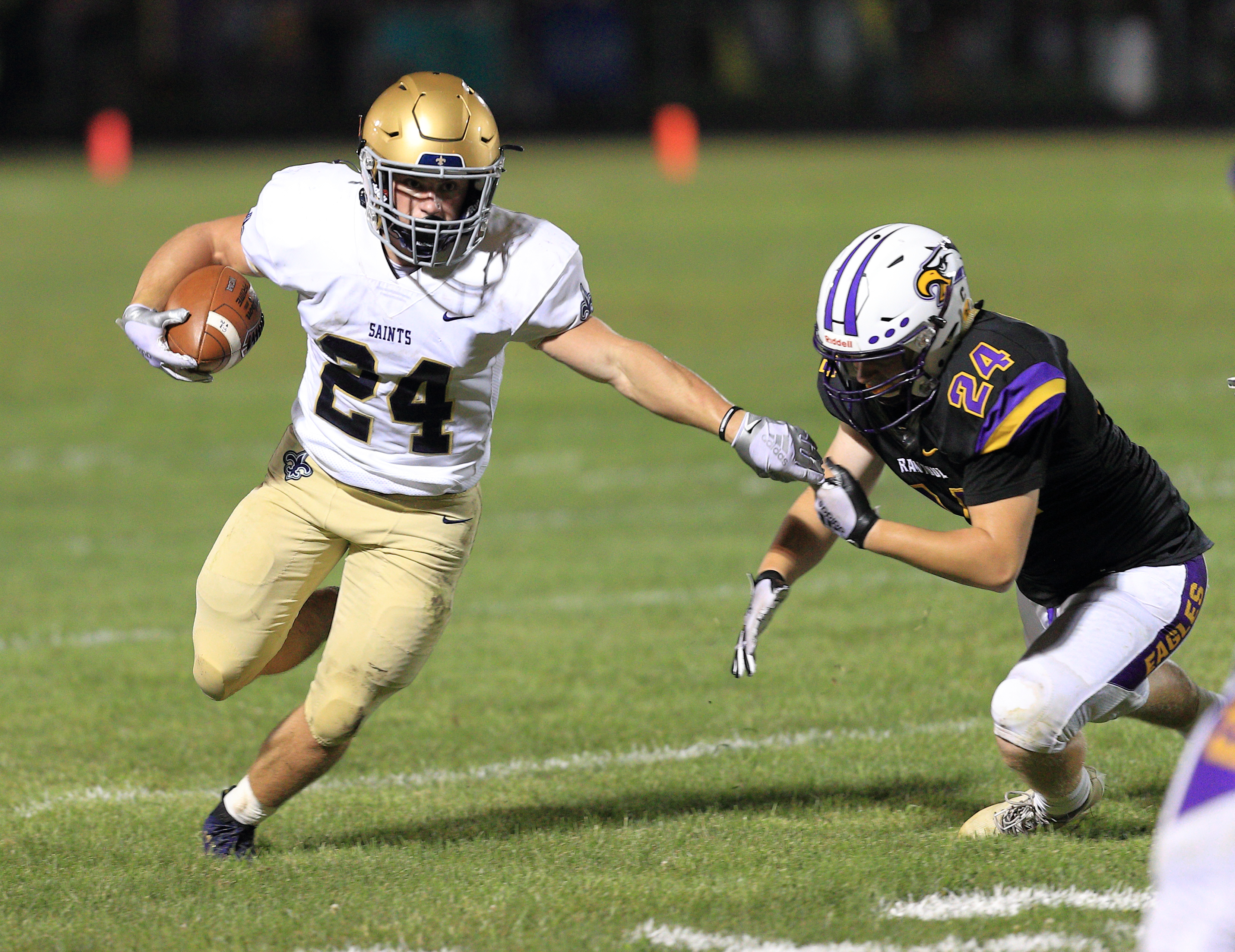 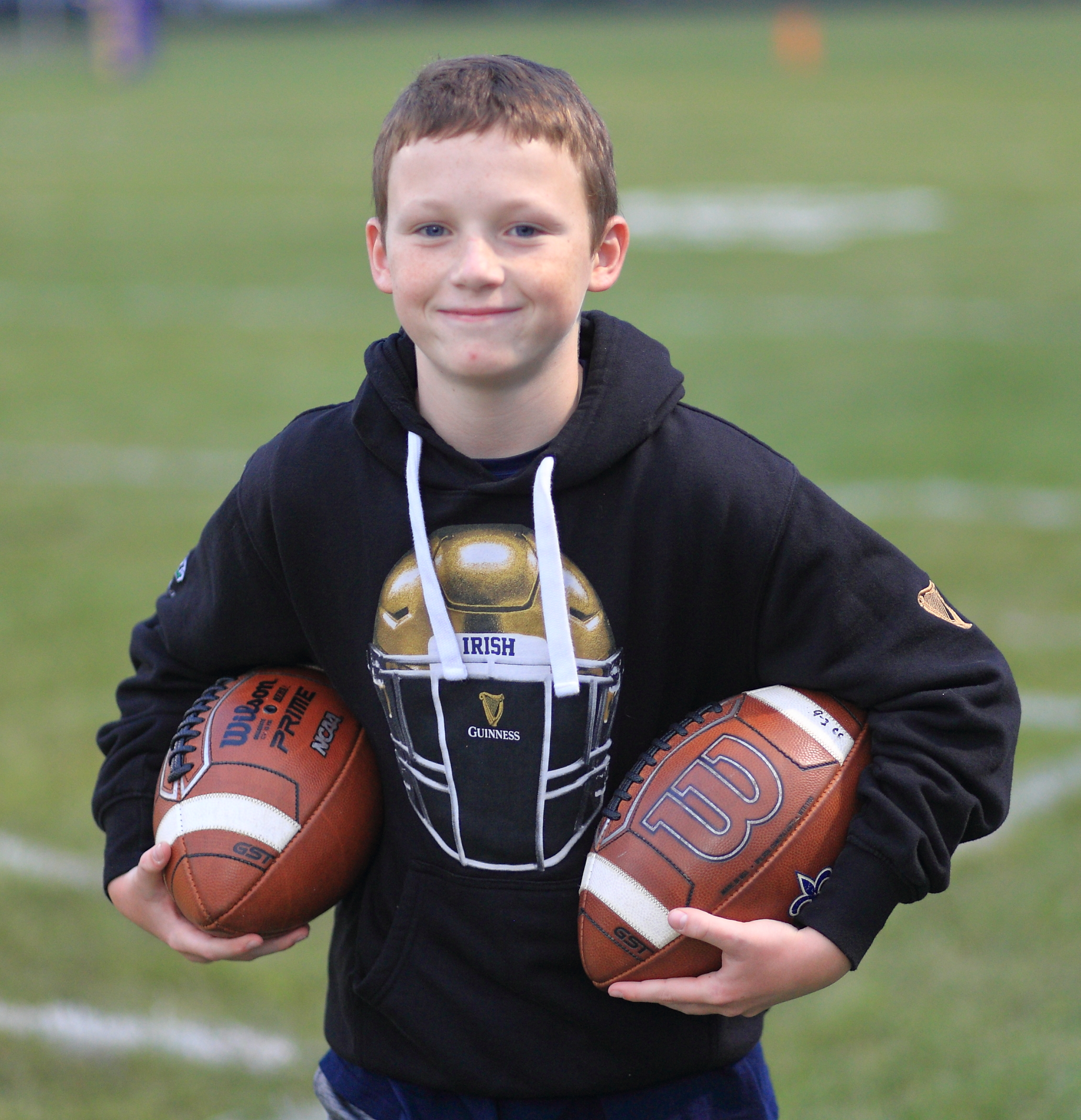 Good photos with bad conditions. Did I see a facemask violation in the one photo between # and #12?

Thanks for the settings listed.

I am not a HS football official so I am not sure but I think the defender could have been called for an illegal use of hands because although he didn't contact or pull the face mask, he put his hand under the face mask.  The offensive player was on the margin of committing a face mask penalty because under HS rules pretty much all contact with the face mask is prohibited and incidental contact is a 5 yard penalty but I wouldn't have called it on him because it was the most incidental of incidental contact.

HS officials have a really tough job because it isn't their full time job and they catch a lot of grief from players, coaches, and most frequently parents.  They can't look and be everywhere at once so calls are missed.  I really appreciated that during the orientation from the AD in Anna's new high school he spent some quality time talking about expected behavior from the players, coaches, AND parents making the point that he works diligently to attract the best officials he can find for the school home games and he doesn't want all of his efforts being undone by poor behavior by anyone at the game.

It is something more high school ADs need to stress and finding good officials is particularly problematic with the pandemic.  This year several first year football officials are calling major varsity games in this area and there is a learning curve for everything.

When I was coaching soccer, any official who was trying and exhibiting good intentions was good enough for me.  Blaming a lost match on a blown call is just an excuse for the loss, not the major reason.  One of my players once complained that the official missed a call when he was fouled in front of the goal which would have been a penalty kick and he blamed the official for our 2-1 loss.  I reminded him that he missed 4 makeable shots on goal so if we start falsely blaming people, maybe I should blame him for the loss.  That was a good teachable moment for a very capable young man who just needed to get his head on straight 🙂

In my years of shooting various HS sports I have seen a lot of very good officials, a few incredible officials, and only one truly bad head official in football who was missing blatant helmet spears by a player after he was alerted to it by the coaches.  After the alert two more players went out with concussions before the responsible player was finally ejected after 6 blatant fouls only one of which was finally called.  Given the ease of seeing them and the obvious sound of hard helmet to helmet impact, it was inexcusable behavior.  That officiating team was reported to the governing body and one young man will never play sports again because of a neck injury sustained during that game which left him extremely vulnerable to a life changing injury with further contact.

I have always made a point of introducing myself to the officials before events and I make sure to stay out of their way AND I also offer to provide them with photos of themselves in action.  It makes for a more pleasant environment for all of us although it does lead to some odd interactions.  At a soccer match last week, one of the linesmen apologized because he thought he had gotten in my way.  I let him know that it was impossible for an official to get in the way of a photographer because they ALWAYS have the right of way.  In 2019, an official was nearing retirement and he kept looking my way when making calls to ensure he had some good photos; it was a little strange but I can honestly say it didn't impact his level of officiating performance and he was one of the most capable and dedicated officials I have worked around.

I like your treatise on games, officials, calls, etc. Officials in any sport catch it from all groups as you mention. The wife and I are big baseball fans. We even have a card table in the living room to watch ballgames during lunch or dinner.  MLB Channel has Quick Pitch in the morning which is a review of the previous day's games. Plus, our oldest grandson plays with the Gwinnett Stripers, Atlanta's AAA club. Even with four umpires, we see close calls that are reviewed, being  upheld or changed.

Again, my complements on the photos, taken under less than ideal conditions.

Question here, do you photograph sports for the media?

I never had an issue with kids when coaching soccer but I did have a couple of problem parents one of whom showed up intoxicated for a game and kept drinking.  That wasn't a pleasant experience and the official and I flipped a coin to see which one of us was calling 911.

These HS photos are purely volunteer work.  One of the local papers lifted one earlier this year which was fine although I did object to them attributing it to their staff reporter. But that paper has been garbage for years. Some of the photos they used from last Friday night were so horribly blurred you couldn't make out any faces.  My high school journalism teacher wouldn't have used them in our school newspaper and that was back in the days of film and manual focus.  I guess parents love seeing their kids even when they are just a blurry blob and we are far more critical than the average viewer.

Another community paper asked to use the photos and I allowed them to do so, they provide photo credit as they should.

I was fortunate to have a well paying career with great retirement and I did a lot of consulting work along the way so I can afford to volunteer and give back to the community.  I am starting to work with Anna's new high school on creating images to populate their soon to be released new website.  Their culture is a very  comfortable fit for me because they want everything to be done as it should be and I will be spending a lot of time with them in the future.  I am getting a little busier now because I am teaching an online Sports Marketing class for a university in Wisconsin that goes live in the morning.  I was bored during COVID and agreed to teach the class before Anna decided to transfer schools, had I known I would have stayed happily retired from teaching 🙂

I know of one parent who is banned from all ball parks in the city and county due to his attitude...which is real bad.

My complements on the story. I'm also retired but keep busy with too many things, according to my wife. But what does she know? A close friend is 86 and he states, "Life is like water-skiing. If you slow down, you go down."