Greetings! I am new to the forum and a new user of a Canon CR-N300 PTZ camera. I use it in a house of worship for live streaming.

I plan to power the device with PoE+ and have a PoE+ injector between my switch and the camera. The camera does not power on (the status light blinks green) with the just the LAN/PoE+ CAT6 cable attached. The camera powers up and does everything it is supposed to when I have the supplied power adapter attached. My eventual permanent mounting location would make the supplied power adapter difficult to use. PoE and NDI, allowing a one cable solution, was a big part of my camera selection.

Is there anything that I need to do with the camera in setup or in the settings to allow it to be powered by PoE+?

According to the website, the PoE+ switch or injector must meet the following requirements:

Something like this with a run of 300 ft or less should work. 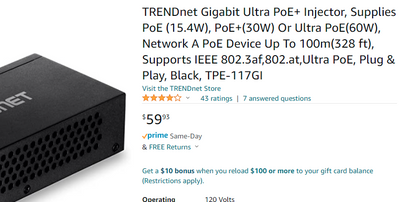 Were you ever able to resolve this issue? I am having the same problem.

My problem ended up being pretty pedestrian. The labeling on my POE injectors was vague. The ones I received did not pass the correct wattage for the devices - enough to light up some lights, but not produce an image or pass a control command.

I did have an issue with some of my ethernet cables (which I made myself) as well - there are a couple of different wiring configurations for ethernet, T-568A and T-568B. I was using some old patch cables (some that were used for telecom in their prior application) in the array that mixed stuff up - once I made sure that everything was T-568A and all 8 wires were used, everything worked as it should. I am running one camera with a run of about 30 ft and one with a run of about 180 ft, with content, control, and current all running across the one cable. I am using Cat6a cables and trying to build my infrastructure up to 8K capability.

Glad to hear you figured it out.  As nice as making your own cables is, one faulty crimp can send you down a rabbit hole looking for connectivity issues that wouldn't otherwise exist.  With PoE+, power matters as you discovered.