I'm food critic and taking photo of plates is very important to me also the quality,

the big issue is the lighting in the restaurant sometimes they are really dark so i stopped taking photo by my iPhone and i bought Lecia D-LUX 6 and to be very honest i didnt see any changes.

the other day i see a guy on flicker who has been to same restaurants i've been too and the photo he took was unreal very good clear actully i was shocked how he done that !!

here is sample of his photo

is this blur effect can be found on lightroom or its just focus https://www.flickr.com/photos/cityfoodsters/15904145218/

and this is the restaraunts which was dark

He / she is using what's called "fast glass" meaning lenses with wide apertures. The specs from each photo are directly below them & at f2.8 the depth of field on a full frame body is pretty shallow when shooting close up. The fast glass also allows shooting in low light & getting a better result than using a slower lens. You will also note that they used a relatively high ISO because the 6D can without being too noisy.

This may be a good learning tool too. You need to have a basic understanding of the DOF (depth of field) that will be in focus front to rear to know why the background turned into a blur. It has to do with both the lens aperture & the size of the sensor in the camera. Use the page to compare cameras with very small sensors to cameras with larger sensors (Canon DSLR's come with 2 sizes right now, & so do Nikon) using the same aperture & distance. The different DOF's will show why one photographer is getting a very different result than you with your phone & camera.

When a camera focuses on a subject at some distance, that subject is expected to be sharp.  But other elements in the image which are either closer or farther from the focused subject may not necessarily also be sharp.  Whether or not they also appear sharp depends on how close they are to the lens' focused distance and some thing called the "Depth of Field" (we commonly abbreviate that as "DoF")

The DoF is not a distance...it's a range.  It's the range of distances at which any element that falls within that range of distances will appear to be more-or-less in acceptable focus.  Outside that range, things will seem blurred (initially just very slightly blurred, but the farther away they get, the stronger the blur.)

It turns out three factors influence this:

1)  The subject distance.  When the focus distance is very short (subject is close to camera) the DoF will naturally tend to be narrower.  This makes it easier to develop strong blur in elements in the distance.  If the subject is far away, the DoF tends to become more broad.

2)  The focal length of the lens plays a big factor.  Wide-angle lenses (short focal lengths) tend to have naturally broad DoF.  I have, for example, a 14mm lens (ultra-wide angle).  I can focus that lens to about 3' and the whole world is in pretty good focus (not perfectly though).  If I wanted to develop a strong blur in the background, then that ultra-wide lens would NOT be the lens of choice.   And not surprisingly the opposite is true when I use very long lenses (telephoto).  They tend to have somewhat shallow DoF.

3)  I saved this for last since it's the most complicated to understand...  this is how the "focal ratio" (or f-stop or "aperture") effects the DoF.  The lens has an opening through which the light can flow into the camera.  That opening has a diameter.  If you divide the focal length of the lens by the diameter of that opening the result is what we call the "focal ratio".  In other words, suppose I have a 50mm lens and the aperture opening is 25mm wide... that lens is f/2 ("f/" is the shorthand for "focal ratio") because 50 ÷ 25 = 2.

It turns out the lower the focal ratio, the shaller the DoF and the easier it is to blur the background.  At high focal ratios the opposite happens... the DoF is increased and the amount of blur you get even on subjects outside the DoF is not very much.

All of these three effects are combined.   To create a strong background blur you want a long-ish focal length lens with a LOW focal ratio and you want your subject CLOSE with the elements you want blurred in teh distant background.

With that, here's an example that I've already posted on this site: 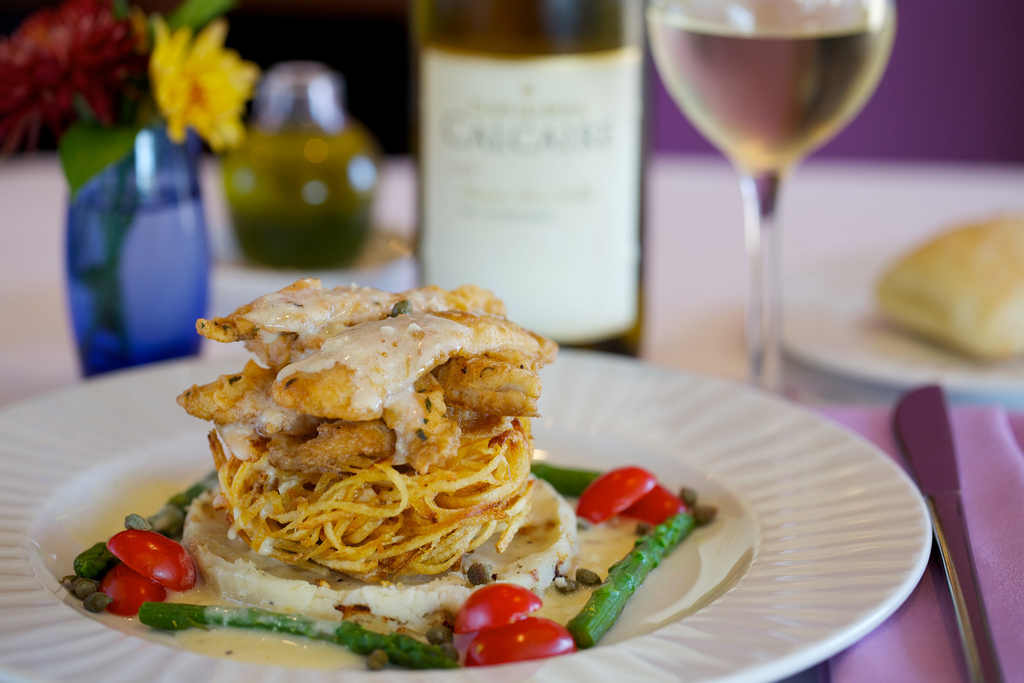 The above was shot with a full-frame camera (a Canon 5D II) and I was using a long focal length lens (a Canon EF 100mm f/2.8 Macro IS USM).  However I wasn't actually shooting at the lowest possible focal ratio (aka "f-stop") available... I set the focal ratio to f/4 (even though I could have gone lower).  I did this BECUASE f/2.8 would have been too shallow (I would not have been able to get much of the food in acceptable focus.  I wanted more than just the front of the food in focus.)  But I did want to make sure the wine and other elements on the table to nicely blurred.

Incidentally, I didn't take this while dining.  This was a food shoot for the restaurant.  This food was plated up just for the photography.  The restaurant was closed at the time.  There are some large open windows to the right which are providin a nice broad lighting source (for soft lighting) but the left side was far too dark.  I was going to try to supplement with lights, but instead opted to use one of my large diffuse reflectors.   The chef (not pictured here) is actually holding the reflector for me on the left and he's bouncing some light into the left side of the food to brighen it up a bit and balance this shot.  You can see that the left is a little darker, but not substantially darker (and that's exactly what I want.)

Now here's another example and this dish created a problem for me.  I don't believe I've ever posted this next image on this site before.  What I'm about to show you is NOT THE FINAL IMAGE: 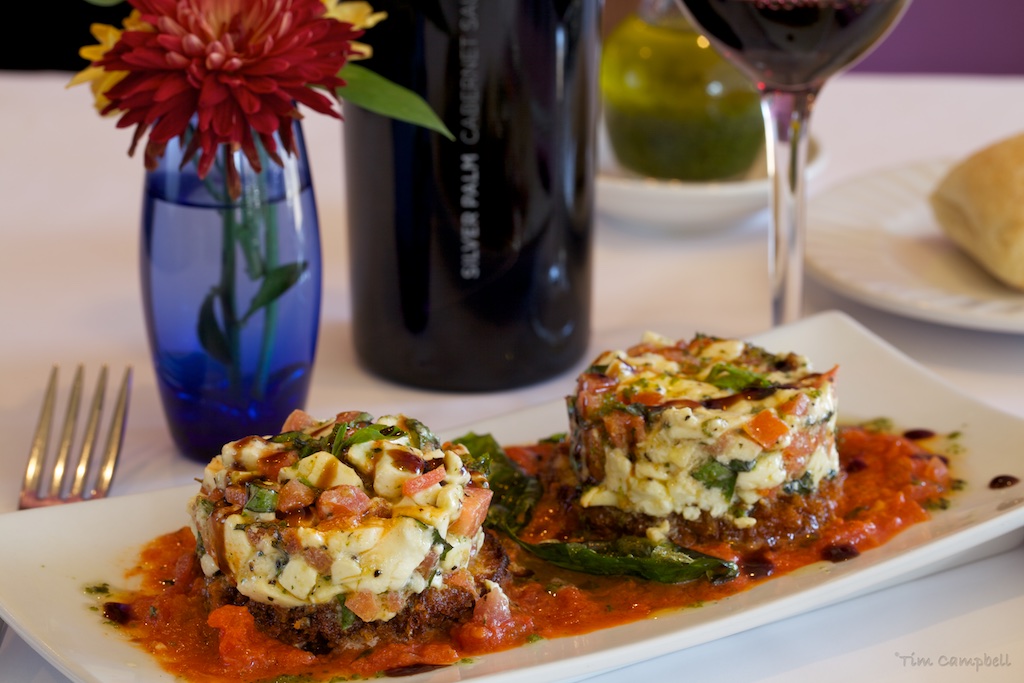 I'll call your attention to what I don't like in this image... see that bottle of wine?  If you check it carefully, you'll see that moderately blurred label says it's a bottle of Silver Palm (a nice wine, btw).  But I don't want you to be able to read the label.  That detracts your attention from the food here and THAT's what I want the viewers to see.  This image is supposed to be displayed alongside the image of the perch and I want them both to have about the same level of blur... and they don't (hence this is not the final image.)

As I shoot this, I'm using the same camera, same tripod, same table.  Same everything... except the focal ratio is now f/8.  That's WHY the background only has a very moderate blur.  f/8 doesn't allow as much blur as f/4.

So why not just shoot it at f/4... problem solved, right?  It turns out that created another problem.  This dish (eggplant, btw) looked best when angled.  The problem with that is f/4 wouldn't allow me to get the two towers both in focus.  I had to stop down to f/8 to achieve focus on the dish... but stopping down ALSO means that the background isn't blured to match the shot of the perch.  That's a problem.

To solve that, I cheated.  Here's the cheat: 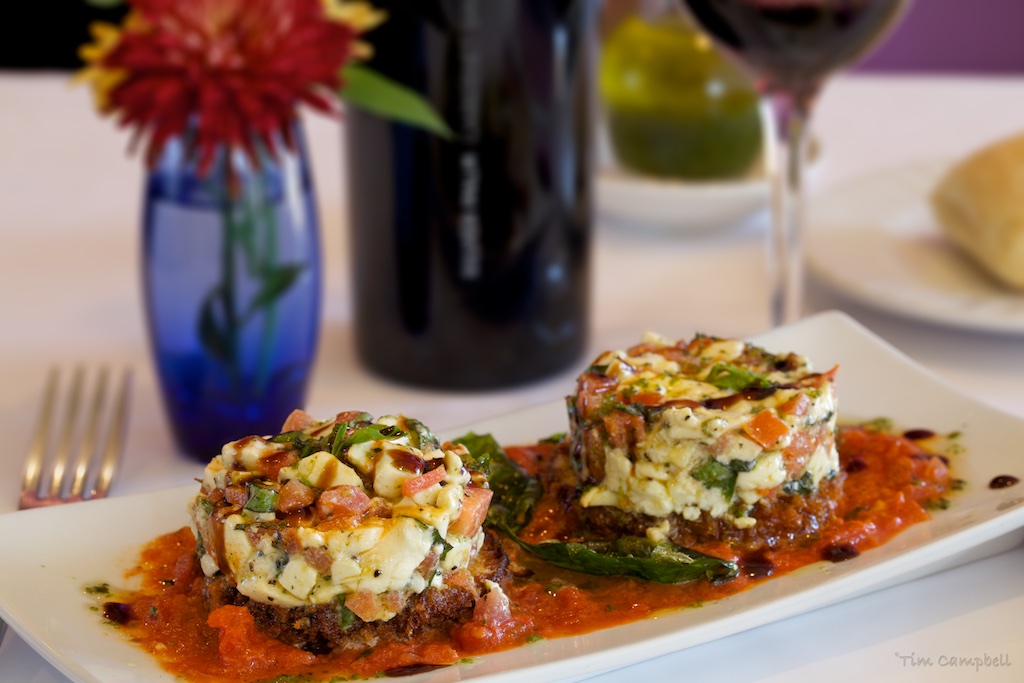 But this blur isn't natural... it's done in Photoshop.

Photoshop uses "layers" to perform adjustments and to do this I needed to duplicate the image so that I have three "layers" and they're all identical.

On the front-most layer, I carefully select the "plate" of food and remove everything else.

On the next layer, I apply a Photoshop "Lens Blur" effect which I fiddled with until it matched the natural blur of the perch.

Viewed together this gets close to what I want, but there's this horrendous "halo" that the edge of the food plate has because the blurred layer has a blurred copy of everything and my cut-out of the front layer cleanly cuts off the plate.  So what you see is the blurred edge of that background copy of the plate and it looks bad (you'll have to trust me).

The order of layers is important in photoshop... you always see what's in front (unless that layer has a clear spot in it...then you see see what's in the layer beyond... and so on.)

Put it all together and what you get is sharp food, a natural transition from plate to background (which is really in the third layer) and then the nicely blurred background (via the Photoshop "Lens Blur" filter) and it all resembles the natural effect I got with the perch shot at f/4 (except this was done at f/8).

So yes... you can do blur "in software".  BTW, this was a somewhat more advanced use of Photoshop and I had to work on this image for a while to pull it off.  It doesn't work with every image.  I've had lots of images that due to the way the foreground and background presented themselves, there was no neat way to pull off the blur.   It worked for this image because the rectangular plate actually goes from edge to edge in the image (notice the extreme left and extreme right are out of frame) and that created a border of separation that I needed.  I would NOT suggest trying to apply fake-blur to most images (much of the time it either doesn't work or it doesn't look very convincing when it's done.)

shall i keep practicing with my D-LUX 6 or buy new gear? as i mentioned my main is food and sometimes out door

I don't know anything about your Leica but according to it's specs & the DOF Calculator it's quite capable of producing the effect your looking for but I don't know how high an ISO you can use before things get noisy (grainy) looking. Experiment at home & you'll find the answer. You will need to shoot in manual mode of aperture priority  mode & use wide apertures to start with.

"... taking photo by my iPhone and i bought Lecia D-LUX 6 and to be very honest i didnt see any changes."

This is really concerning to me.  I bet Lecia would not want anybody to read this!   I hear people say this from time to time and for them the iphone is exactly what they need and should use.

Otherwise, the Lecia should do what you want, you just need to learn how to use it.  You also need to add a post editing software program to your list of absolutely needed compontes.

Thanks all for your kind help,

the photo is not clear "messed up picture"

because i dont have stand or my hand is shaking?

how do yo guys fix this?