Auto-suggest helps you quickly narrow down your search results by suggesting possible matches as you type.
Showing results for
Search instead for
Do you mean
Reply
Topic Options
Tronhard
Respected Contributor

I couldn't resist...  I got this sent to me by someone else who finds selfies a hare-raising (yes, I meant that spelling) frustation. 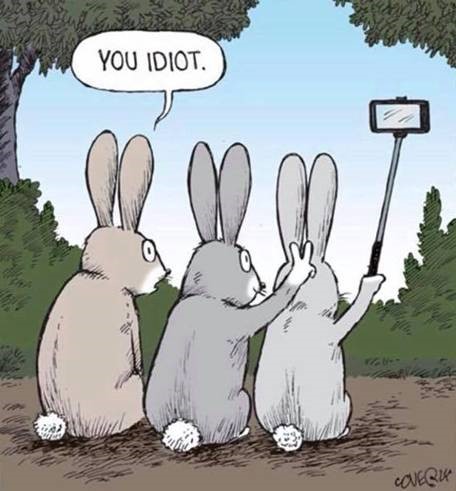 And a sometimes dangerous activity given those who have stepped in front of traffic or off of ledges while trying to capture their image.

If Norman Rockwell were still alive I am confident he would use the "selfie culture" as fodder for a humorous illustration.

I think there has been a collision between technology, in the form of immediate phone communication to the web and social media, plus the new 'Kodak Brownie' of the 21st century, the cell phone (neatly wrapped in one easy-to-carry package);  and our innate desire to communicate, gain recognition and status. Don't get me wrong, the invention is a neutral thing and has given many benefits - exposure of corruption, saving lives in emergencies etc.  But it has a dark side.

In it's extreme forms it produces a very narcissistic behaviour and attitude where the person dominates photos they take - 'this is me obscuring the Eifel Tower', 'this is me blocking your view of the Taj Mahal or the pyramids', and becomes addictive - they can't put the phone down and they can't stop taking photos of the minutea of their lives.  The Brownie had a similar effect, but by no means as massive because of the economics of taking, processing and sending the photos to friends and family, rather than gaining fame and fortune via socal media such as Instagram.

Then there are the influenceras, people I both admire and despise because they have made, in many cases a decent living travelling (the envy part) and posing provocatively in beautiful locations.  They get thousands of followers (who assumedly get some vicarious pleasure from their adventures and posturing), and that gives them financial clout through advertising, showing places and products.  I am reading time and time again where someone has gone to a service or product provider and asked for whatever free because they are an influencer - basically coercion, because refusal could lead to bad reviews.

That is one thing, but from a photographer and preserver of nature it has a dark side.  Such people stand in front of whatever you are trying to photograph, taking turns with their poses and not following the protocol of conventional photographers of getting out of the way to let others have a shot.  Conventional photographers face their subject from some distance, selfie takers stand right in front of it obscuring it from everyone else.   In NZ some of these shots of beautiful places have resulted in them being essentially ruined because all the other social media users want to go to what was a pristine site and get their shot of them in front of it.  The result has been literally queues of people trampling the landscape.

People Queue to get the perfect selfie

In Wanaka there is a tree that grows out of the lake.  It is beautiful in its scenic space.  Now the council is looking to put a big fence around it because selfie takers are climbing on it, breaking branches etc. so they can get their perfect image of themselves, in doing so they damage and destroy what they think is beautiful.

That is not an isolated case.  Remote walking tracks have been turned into quagmires by hoards of people who want that shot.  I travelled the world taking landscape images, but I always respected the places I visited and never disturbed the landscape or wildlife.

In Canada people are feeding bears to get shots of them close-up with their cell phones.  Apart from the fact that this is a very dangerous activity for them, they either don't realize or don't care that by doing so they acclimatize the bears to people, putting them both in danger of their lives.  Conservation officers are having to kill more and more bears that have been taught that people = food, and it's not their fault.  It's ours, or more specifically those ignorant, selfish and narcissistic selfie takers.

"Doctor told me to get out and walk, so I bought a Canon."
Report Inappropriate Content
Message 5 of 6 (910 Views)
Reply
0 Kudos
Tronhard
Respected Contributor

Well, I must say you seem to have accumulated some skill with it already.  I have yet to engage with layers