Why is it that I can't take a good picture of the moon with my EOS T2i with a 70-300 IS lens?  When I look thru the viewfinder, I can plainly see all the craters on the full moon, but when I take the picture it just looks like the headlight of an on-coming train, no craters at all.  I've tried adjusting the shutter speed, the aperature, the ISO setting, and nothing changes the result.  I'm frustrated.  Can anyone solve this riddle for me?

Here's a technique you can try:

1. Camera Mode: Set your camera mode to full Manual Mode.
2. ISO: Set your ISO to 100 if you have a Canon DSLR and to 200 if you have a Nikon DSLR (basically, whatever base ISO you have in your camera). For most other brands, the base ISO is also 100. If you have a point and shoot camera, see if you can find a menu setting to set your ISO to 100. Make sure “Auto ISO” is turned Off.
3. Aperture: Set your aperture to f/11.
4. Shutter Speed: Set your shutter speed to 1/125 on cameras with base ISO 100, and to 1/250 on Nikon DSLRs with base ISO 200.
5. Lens Focus: Set your lens to manual focus (either through a switch on the lens or on the camera) and set your focus to infinity. Be careful while setting the focus to infinity, as some lenses allow focusing beyond infinity. On more advanced DSLRs such as Nikon D300, there is a handy feature called “live-view with contrast detect”, which can accurately acquire focus on distant objects. I have used it many times for my moon photography and it works great! If you do not have such a feature in your camera, then try setting your lens to the center of the infinity sign, then take a picture and see if it came out sharp by zooming in the rear LCD of the camera.
Examples: Nikon D90 DSLR: ISO 200, Aperture f/11, Shutter Speed 1/250. Canon EOS Rebel XSi: ISO 100, Aperture f/11, Shutter Speed 1/125.

I'll give that a try. Thanks for your help.

I totally agree with above, with the caveat that you need to set your shutter speed to proper exposure, and it may not be the exact settings that PJ used because of small differences (moon location, clearness of the night, light pollution, filters on your lens, camera you used, etc).  Start there, but adjust as necessary.  I would also probably shoot at f/8, but you likely can’t see any difference at all between that and f/11 (when exposed the same).

You previous shots weren’t coming out because they were over exposed.  You were probably using an auto mode, where the camera seeks a middle ground between dark and light.  The moon is brighter than you think, especially when you compare it to the “empty” sky around it at night.  So the camera weights in this small globe of bright amidst a sea of black and aims for grey.  As PJ suggested, this is definitely a situation for manual exposure.  Nothing’s moving, and digital frames are free, so fire away, check in the LCD (or better, laptop), adjust and repeat.

In case you don’t shoot manual, a little elaboration on the settings PJ suggested:  ISO100 is the lowest base ISO, it’ll provide the clearest (minimal noise) images.  If your over exposing and your ISO is above 100 the first thing you do is bring it down.  For the moon 100 is great.  But, for example, capturing stars you’d have to turn it up to be able to get good images in a reasonable shutter time.

Aperture adjusts depth of field, but you don’t have to worry about that when shooting something 200,000 miles away.  Choosing an aperture in the middle will give you the sharpest photos.  The “perfect” value is a mix between your camera and lens.  I’m not sure which 70-300 you’re using, but most of them are sharp by f/8.  Your camera however starts getting less sharp past f/6.8 (that doesn’t mean it’s not plenty sharp at f/11).  Hence my suggestion that I’d use f/8, but that probably stems more from the “f/8 and be there” mantra.

I also didn’t see any mention of a tripod, you are using a tripod, correct?  If not that’ll change the equation (you’ll want a faster shutter speed, so definitely f/8 and bump up ISO so you can shoot at 1/300 or so).

There can be a few problems...

Carefully focus the moon by putting your lens on the "infinity" focus position (and note that this is not the same as just turning the lens focus ring as far as it will go -- not all lenses, but most lenses have distance marks and a mark for "infinity" that looks like an "L".  The actual position is corner of that "L" where the two lines meet.

You can let the camera auto-focus by putting the center AF point on the edge of the moon (to maximize contrast).

The moon is illuminated by the sun -- so the exposure on the illuminated side of the sun is always consistent.

For a moon which is well above the horizon, the exposure is set based on the "Loony 11 Rule" (a play on "lunar" of course.)

There is one more issue...  that being the issue of "seeing" conditions.  Earth's atmosphere can be turbulent and have considerabe temperature changes and this will greatly distort things. Oddly... when looking at the moon your eyes wont so much notice these problems (I think your brain makes "sense" of it) but the camera will certainly capture the problems.

The analogy I use for seeing is this:

Suppose we place a coin in the bottom of a pool.  I hand you some binoculars or a small telescope and ask you to read the date on that coin.  As long as the water is perfectly still, you probably can read the date.  But if I start making a bunch of waves, you'll be able to see that there is a coin, but there's very little chance of reading the date on it.

The atmosphere can (and does) distort your ability to capture a clean image just like the water in the pool analogy.

Often the way around this (besides waiting for a night when the atmosphere is stable) is to take a LOT of frames and hope to capture one where you got a clean shot (take enough and you eventually get lucky.) 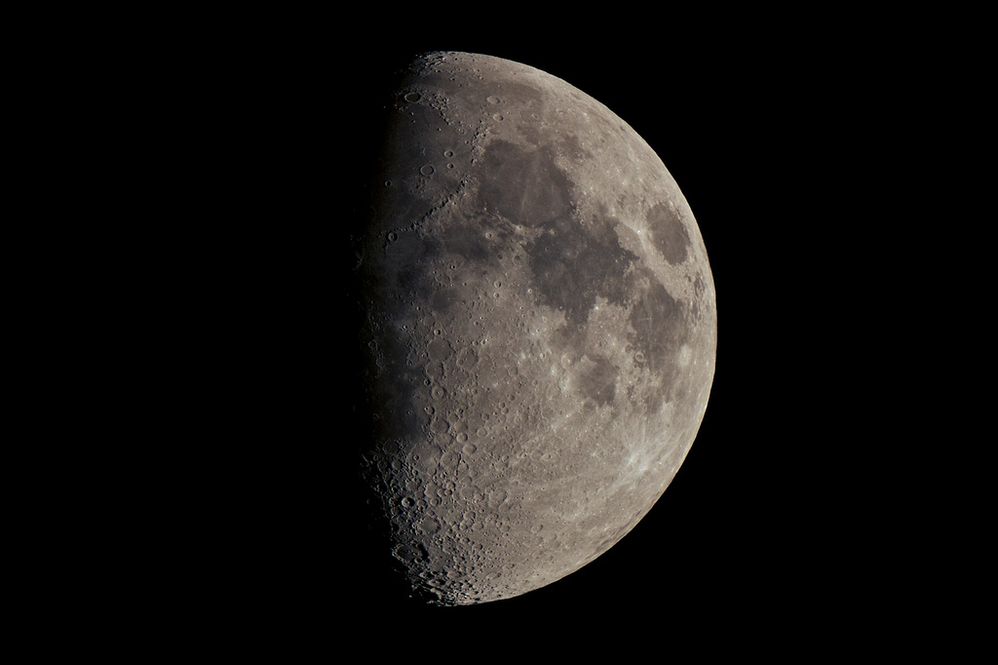 Ordinarily, you *should* be able to use the "Sunny 16" rule to photograph anything illuminated in full daylight (and the moon is in full daylight).  So a "Loony 11" exposure is technically over-exposing the moon by a full stop.  But that's because the moon is exceptionally poor surface "albedo" (it's reflectivity) -- which astronomers compare to being roughly the reflectivity of a black rubber tire.  So basically we are deliberately over-exposing it to get something that resembles a "correct" exposure.

The previous responses are correct. On a normal, reasonably clear night the moon itself is far brighter than you might think. It's reflected sunlight, and is one or two stops less than the "sunny 16" rule for broad daylight.

Basically, your camera is being fooled by all the deep darkness around the moon, into greatly overexposing it. All cameras' metering systems would be fooled, so it's not a fault of the camera.

You also might try timing your moon shots for late evening or early morning, well before the sky is completely dark. You'll often get better results.

Also avoid too slow shutter speeds... The moon moves a lot faster than appears to the eye. 1/15 and maybe even 1/30 can show some subject movement blur, so try to ke

ep to shutter speeds faster than those. 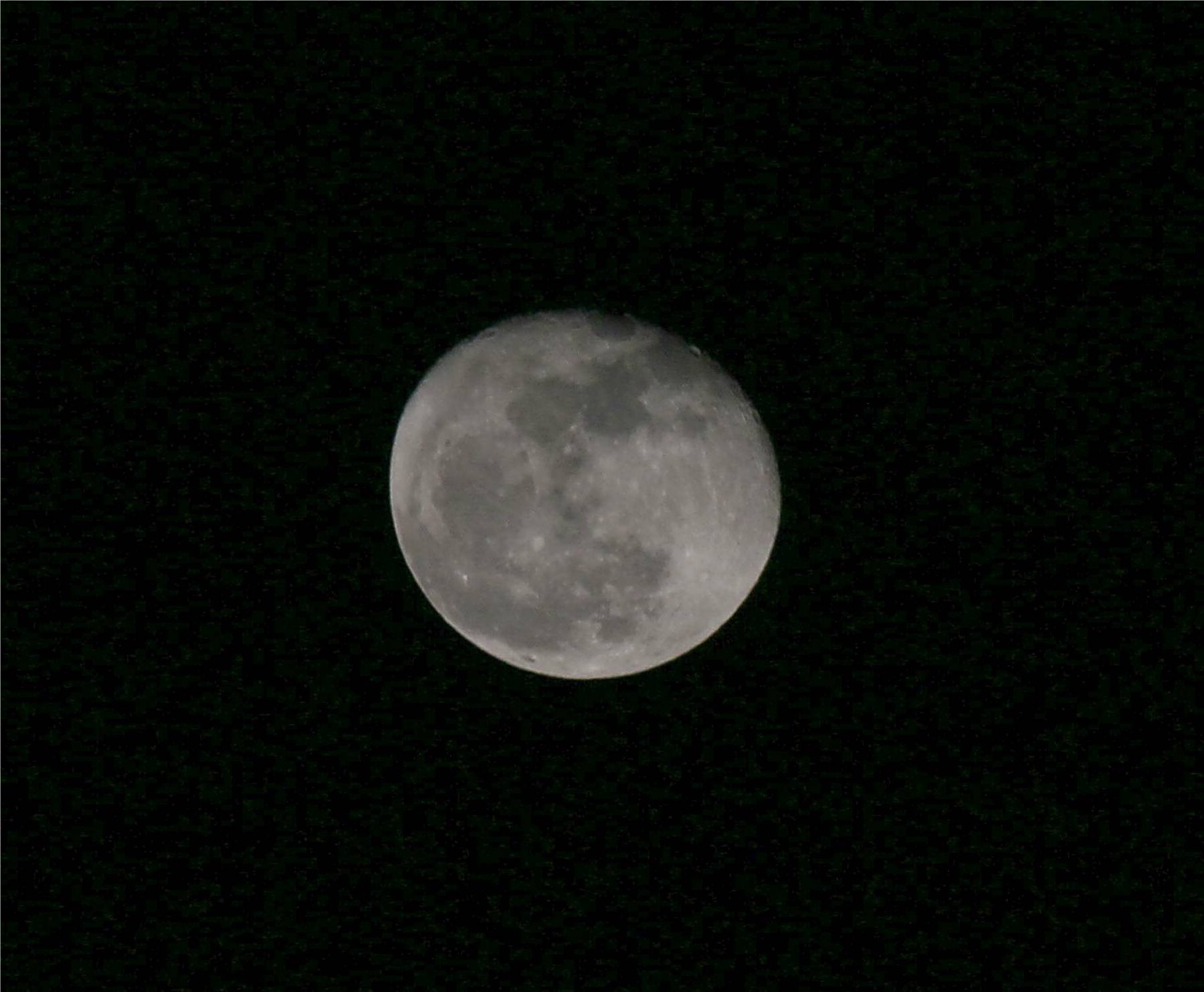 Thanks for all the help.  Following the first suggestion, I was able for the first time to get a clear picture of the moon.  I've been trying to do that forever it seems.  Guess I should have just asked you guys sooner.  Well, problem solved.  Thanks again.

And that is a very respectable image of the moon!  Well done!

Very nice!  In addition to a nice capture, there's nothing like the satisfaction of finally figuring out something that has been giving you trouble.

I don't know if that noise in the sky bothers you or not.  Any decent noise-reduction program would be able to smooth that out considerably.

Yeah, it's great to finally figure that out.  I know I've been trying to capture a picture of the moon for years with no luck.  Got a lot of on-coming trains at night though.  The noice in the skiy doesn't bother me.  It actually makes it look more like outer space.