I'm a rookie whats the difference between the eos ti and eos t3i other than price? features???

Canon doesn't have a "Ti" -- I'm wondering if you were asking about the difference between a T3 vs a T3i (in which case... that "i" suffix is a HUGE difference.)

In North America, Canon's entry series DSLR bodies have the "Rebel" name.  They tend to release a new updated version of the camera just about every year.  But rather than disconinue the previous model, they tend to slide all the models down a notch.

This year, the top end of the entry-range is the T5i.  Last year it was the T4i.  The year before that it was the T3i (you get the idea.)

However... Canon also keeps a model which is intended to cover the basics, yet be the most affordable entry level DSLR they sell.  That model lacks the "i" suffix -- that's the T3.  They do _not_ re-introduce a new basic entry body each year... hence there was no T4 nor T5 (as there was a T4i and T5i).  The T3 and T3i both were introduced in the same year.  The T3 was (and still is) Canon's most basic DSLR when it was introduced but at that time they were still marketing the T2i and T1i (neither of which is made anymore.)

The sensor used on the T2i, T3i, T4i, T5i, 60D, 70D, and 7D are all "APS-C" size 18 megapixel sensor and offer about the same image performance (and notice the T3 is not on this list).  The differences in each camera tends to be features, control, performance, build quality and other benefits -- but not major differenes in teh sensor.

The T3 has a 12 megapixel sensor and the overall features are mostly basic (the point of the camera is to be the most affordable in the line.)

The T3i introduced an LCD screen that swings out of the rear of the camera and can tilt & swivel.  Also the built-in pop-up flash can behave as a flash commander for off-camera flash.

The T4i has the features of the T3i, but added a capacitive touch-sensitive LCD screen.  Also, the 9 point auto-focus system was updated so that all 9 autofocus points are the higher end "cross type" (dual axis focusing points which tend to be faster, more accurate, and more difficult to fool into mistakenly missing focus.).  (On T3i and older, they used a 9 point auto-focus system, but only the center point was cross-type, the outer 8 points were single-axis focus points.)

The T5i is nearly identical to the T4i (the mode dial was changed.)  I'm not aware of any significant difference in function.  The differences were so minor, that whereas Canon normally slides each model down a notch to make room for the new body, this time they just discontinued the T4i (there would have been little point in making both).

The 60D and 70D are mid-level cameras (no longer in the entry-level range) and start to introduce features found on the higher end bodies like the 7D, 6D, 5D series, and 1D series bodies. 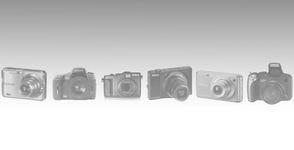 I thought the 70D had the new Dual Pixel 20.2 Megapixel sensor Tim. It's a great camera. The T4i also had a HDR blending mode as well.

Right you are, Colin.

What's nice about that is that it allows the camera to do continuous focus in video mode without "focus hunt" because it's a form of "phase detect" focus.

Contrast-detect focus is the typical focus used for point and shoot cameras or a DSLR using live-view. That system looks for areas of contrast and attempts to maximize contrast between adjacent pixels. Think of a barcode pattern..... Each pixel should be either "black" or "white" but not gray. If you've got gray pixels between the black and white areas then it means the focus is soft. Hence if you keep focusing and re-evaluating then you can eventually achieve accurate focus by adjusting focus until you achieve the best contrast (black pixels adjacent to white pixels with no "gray" pixels in between). I've used a barcode as an example because it's easy to visualize, but it can work for any subject. But that system requires evaluating, adjusting, re-evaluating! adjusting some more, etc. until the camera finds the point where it achieves optimal contrast between adjacent pixels. It's a slower system and it has to "hunt" for focus.

It's remarkable that Canon is able to do this directly on the sensor (no other camera maker has this capability). When using live view, but especially when shooting video, this is a huge advantage.
Tim Campbell
5D III, 5D IV, 60Da
0 Likes
Share
Reply