I need some help with night time car photos:
Equipment I have: Canon T2i, 18-55mm lens, 55-250mm lens, wireless remote and tripod. I like shooting in manual mode as it is a challenge.

So my question: I am at a car show full of hot rods and I want to take photos at night of them driving by. Problem is that even when I use a tripod they still come out blurry to the point of streaking. I do not mind the streaked photo as I have 2 cool shots I did, but I would like the non-streaked blurry free photo at night. Any help on this?

Also, for still, up close car photos I am looking at getting the Canon EF 50mm f/1.4 USM Standard AutoFocus Lens. I like the lower F/Stop and would use it instead of my 18-55mm. Is this a good idea?

Your help would be greatly appreciated.

Hi, Michael. Here are a couple of thoughts:

1. Look at the shutter speed of the blurred photos that you DIDN'T like. Say for example that it's 1/60 sec. So you know you will need a faster shutter speed to "freeze" the car in motion. How much of a faster speed depends on how fast the car is moving. If you want to freeze the car while simultaneously blurring the background, you will need to learn the technique called panning. There are lots of good tutorials on YouTube about how to do this. Another way to increase your shutter speed while maintaining the same exposure is to manually select a higher ISO value, but this runs the risk of increasing the noise in your photo.

2. You don't mention that you have a flash, so I assume you don't. This is another good way to freeze the action. There should be somewhere in the T2i's menus an option to use "second curtain flash" synchronization. This helps to give an image of a moving object the ghostly trail behind the sharply focused subject. If you use "first curtain" synchronization, the trail will be in front of the subject and look really goofy.
0 Likes
Share
Reply

A tripod will make sure there's no blur due to CAMERA movement... but wont do anything to help with SUBJECT movement.  If the cars are driving by and the shutter speed is slow then its going to be blurry.  But there are two things you can do about this.

1)  Learn to take "panning" shots.  Panning is (and you did say you like 'manual' because you enjoy the challenge) going to be another challenge.

You can imply motion in a still photo by showing effects which make it clear that the subject was in motion.  A time exposure of a waterfall renders the water in a blur -- making it obvious that the water is in motion (whereas a fast shutter speed would freeze every individual water droplet).  With cars (or really any object moving -- as long as it's moving in "more or less" a straight line) you can learn to follow the subject with the camera as you take the shot.

Here are two examples I took: 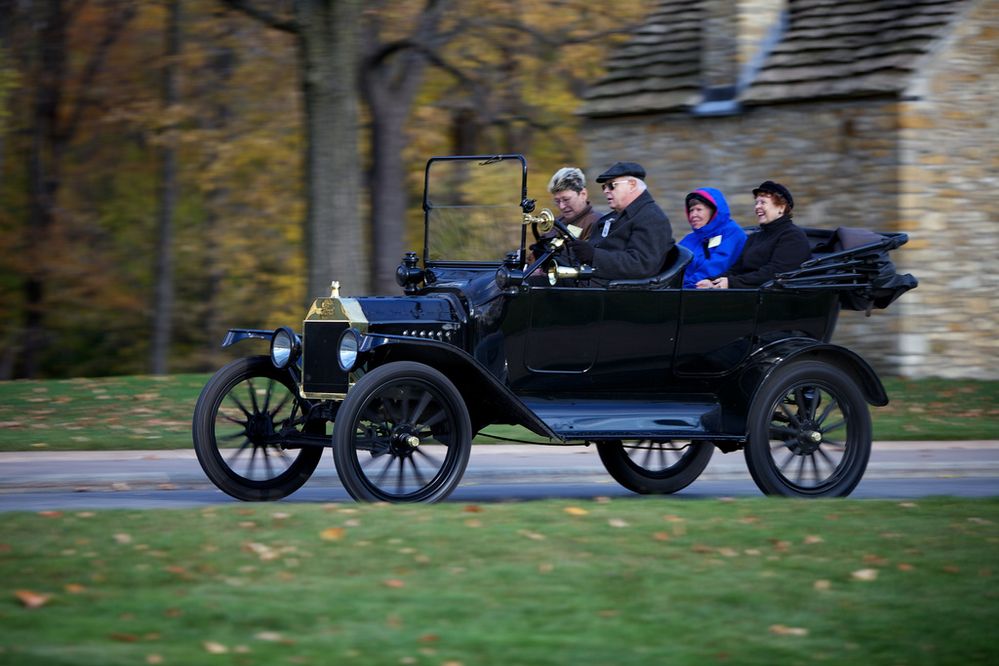 And just in case that one wasn't obvious, here's a more obvious panning shot: 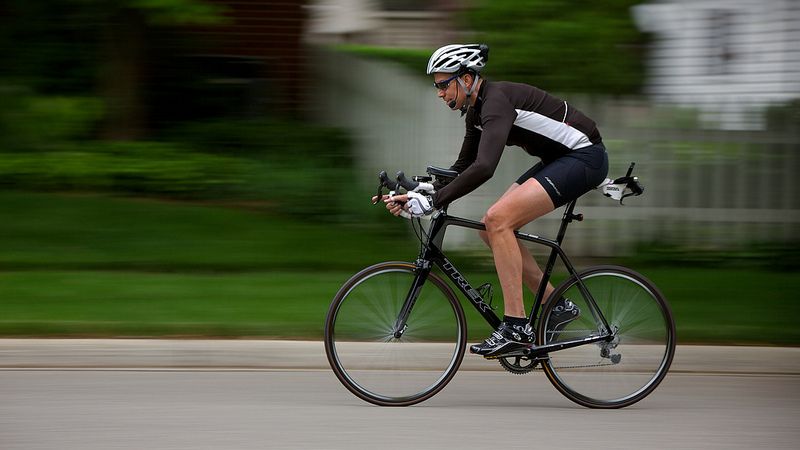 In the first image, the car isn't moving that fast, but I'm using a 1/50th second exposure and rather than holding the camera steady, the camera is "panning" to follow the car... giving a reasonably sharp image of a car (except fo the wheels) and rendering the background blurry.

In the 2nd image, the cyclist is actually moving faster than the car was -- and I'm going even a bit slower on the shutter at only 1/40th sec.

Panning takes some practice to be smooth and steady as you follow the subject.  It's probably best to practice during the day... start with a fast shutter and gradually just keep slowing the shutter speed.   With practice you should be able to get a "sharp" subject with a blurred background for a nice "motion" effect in your images.

2)  The other method is to use flash -- provided your flash is powerful enough.  The built-in pop-up flash is only good for short distances (it's not very large or powerful).  If you have an external flash, this may work well for you.

The shutter speed has to be at OR below the flash sync speed (and I cannot remember if that's 1/200th or 1/250th on a T2i).  But even if it's much slower (say... 1/60th) you may be surprised at how well the flash will "freeze" action.  This is because MOST of the shutter exposure time is just the time it takes for the curtain shutter to completely slide "open" and also completely slide "shut".  The flash can only fire AFTER the shutter has completely opened and must fire BEFORE the shutter can begin closing (otherwise any part of the sensor that was covered by the partially opened/closed shutter speed will be dark.)  The actual amount of time that the flash is providing illumination is remarkably short... often significantly less than 1/1000th second (which is why a flash can "freeze" action even when the shutter speed was much much slower.

But there is one tip... many flashes support a mode called "2nd curtain sync".  Here's the idea behind that:

Suppose you have a very slow exposure time -- let's say it's a full 1 second.

Normally when a flash is used, the camera begins opening the shutter and, after IMMEDIATELY after the shutter has completely opened, the flash will fire.  Meanwhile the camera is counting off the 1 second exposure time.  When the exposure is complete, THEN the shutter beings to close.  That's the default.  It's also known as "first curtain sync".

There is an option to use "second curtain sync".  In that mode, the shutter opens while starting the clock running on the 1 second exposure time.  When the curtain shutter has completely opened, the flash... does NOT actually fire.  Instead it keeps waiting... and in that last moment just BEFORE the shutter is about to close... THEN the flash fires.

This has two very different effects on any blur caused by objects moving in the frame.

Suppose I take a photo of a car rolling slowly from left to right in a dim (but not completely black) location.  If my flash fires with 1st curtain sync, I'll get the full effect of flash on the car (creating a very vivid car) and then the flash goes dark but the shutter stays open as the car continues to roll forward.  So this "ghosting" or streaking of the car continues to expose on my sensor/film because there was some dim light.

You will end up with a car... and a streak of the blurred car which is oddly IN FRONT of the car (and not behind it.)

BUT... if you use 2nd curtain sync... the dim streak exposes first (as the car is rolling) and THEN the flash fires and the shutter closes.  This causes the "ghosting" or streaking of the car to be BEHIND the well-illuiminated (when the flash fired) image of the car.  This makes it look like the car was in motion and looks a bit more like what you'd expect.  But you have to use 2nd curtain sync (which is NOT the default mode) to get this.

Thanks for the reply. I haved you panning in the past and just never thought of it. I will also try the snyc methods.

Question on the lens. Is there a better lens that is not an arm and a leg that would help?

For still shots of the cars, I'd probably actually prefer the 18-55 kit lens. It's an optically sharp lens -- ot doesn't have a low focal ratio but given that you're likely shooting outdoors in plenty of light, low f-stops probably aren't necessary. The EF-S 17-55mm f/2.8 (which can provide an f/2.8 focal ratio at any focal length) is certainly a better lens, but more expensive.

I prefer a mildly wide angle for cars because while a wide angle lens is certainly "wider", it also has the attribute of stretching the depth of the scene. This means shots of car interiors make them look roomier. Shots along the side of a car (e.g. front to back) make the car look longer, etc. If it's mild wide angle then it wont look obviously wide... but you get the gentle stretch for a nice look.

Focal lengths near 30mm (e.g. a 28mm or a 35mm are close enough) will do neither -- they are closest to providing a "normal" look.

Still... the 50mm f/1.4 is a very good lens and extremely popular. It would do well for cars driving by with just a modest amount of distance between you and the car.

You can get very good reviews on most Canon lenses at the-digital-picture website. He mostly reviews Canon gear (he does a little off brand stuff too... but I find his coverage of Canon gear is the most complete.)

Aside from panning with the car and nightime moving car photos what you be a good lens to shoot with? Is the std kit lens 18-55mm fine or try a 17-55mm F/2.8? A lower F stop would allow little faster shutter  and maybe lower ISO?

The 50mm prime is not that aflexible for what I wannt to do corrrect?

Any basic information or help is appreciated.

The EF-S 10-22mm is going to be very wide (lots of wide angle stretch).  Canon doesn't make a 10-24 (though there are ltos of third parties who make lenses with "approximately" the same zoom range.)

The EF-S 17-55mm f/2.8 IS USM is probably going to be the most versatile lens for you -- but also the most expensive.  At, for example, a 50mm focal ratio, that lens can capture four times as much light compared against the 18-55mm f/3.5-5.6 IS kit lens that you're currently using.  That advantage will translate into either faster shutter speeds or lower ISO settings (or a little of both.)

The 24mm prime (I'm assuming you are looking at the EF 24mm f/2.8 IS USM) does get good reviews -- the chief complaint is it's a bit pricier than most people think appropriate.  Normally you don't need IS at short focal lengths, so this is thought of as mostly an advantage to video shooters.  IS *might* help for panning shots... but I'd have to try out this lens to know if it helps or hurts.  On the 70-200 IS lenses, the IS system has two modes... one is the general multi-directional IS... the other is a single direction IS which specifically designed for pannin shots.  This lens just has the general multi-directional IS so it may try to fight you if it's switched on when you do a panning shot.

When faced with a conundrum, I recommend you rent the candidate lenses.  LensRentals and Borrow Lenses are both well known rental sites.