Camera is not taking pictures. 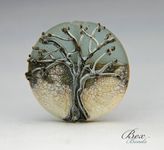 I have an older EOS Digital Rebel, I use solely for photographing beads and jewelry. I was in the middle of a shoot today. I powered the camera off momentarily, and when I came back, my next shots did not show up on the screen. The camera behaved as though it took a picture, and the flash went off, but the screen only appeared greyish black. In the card reader, all previous photos were good, but the failed ones looked just the same on my PC. I formatted the card, and it was still no good. I was hoping it was the card, but I put it into another camera, and the pictures I took with that saved onto the card, and showed up on the screen.

So apparently it is my camera. It's like there is suddenly no light coming in, even though the camera autofocuses and shoots as though everything was fine.

Yes I have removed the lens cap.

Any help would be ever so much appreciated!

Start the process of tedious elimination.  You already tried the SD card. Now you need to try the lens. The battery. The charger. Whatever else that is involved with your shooting.  If all is well and you still don't get your shots, call Canon service.

Thanks so much, ebiggs1. I have elminated all those possibilities and just been on the phone with Canon support, who advised that it was damage to the sensor and there is no possible repair, as it is an old model and they no longer have the parts.

I don't know how the sensor was fine one moment and damaged the next, and I forgot to ask him how that might have happened. However, after telling him the tests I did, he was very certain that this was the issue.

Do you have any idea how the sensor could suddenly fail like that? There was no extreme light exposure or anything. Nothing changed in the environment in between shots... I'm so confused.

"Do you have any idea how the sensor could suddenly fail like that?"

Anything made by the hand of Man, can and will eventually fail.  No other reason is needed.  Have you ever walked into a room?  Switched the light on and poof.  The light burns out.  It's the same thing.

What camera did you have?

Digital Rebel EOS 6.3 MP. It doesn't have any model suffixes like xt or anything like that. However, the manual was for the 300D, even though that is not on the camera itself. Hope that helps.

There are other places to get one, too.  B&H or Adorama are good NewYork mail order stores.  Possibly a local camera shop.