What was it and what did you have to sacrifice to get it?

Since my first camera (along with many others after it) weren't Canons I'll just give the time between purchasing my first Canon body (a used 5D2) to when I purchased the 35L which was 6 months (the 135L came 2 months later).

I guess the sacrafice would be the money it cost to purchase the lens, but while I did want it I also needed it to do my job.

I started serious DSLR shooting in July 2010, using an XTi belonging to my wife. I bought myself a pre-owned XTi later that summer, and then a pre-owned 40D in October 2010. I was blessed with an early Christmas gift of cash, from my parents, which paid for much or most of the cost of my 100mm 2.8L Macro, in November 2010. Without that timely infusion of cash, I probably would have settled for a pre-owned 100mm or 85mm non-L for a project at work, but the 100L's environmental sealing was an asset for that project, and remains useful.

It should be anyways.

In 2003 I got myself a EF 17-40mm f/4L USM because it was the newest ultra wide zoom available. At the time I had no understanding of f-numbers. I am thankful I got this lens as the faster ultra wide was replaced by the EF 16-35mm f/2.8L II USM soon after.

First L lens...Picked up in Japan: Tack Sharp Images!....I shot a model wearing a kimono type outfit with some Kodak T-MAX B&W film...did my own prints....could even see the stitching clearly on the kimono with the grain focuser! 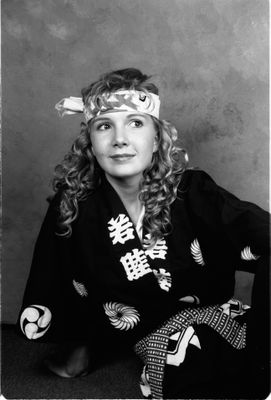