Purchased used last fall, with no manuals or accessories, and a dead battery that the seller assured me was newly charged.

I had been taking pictures to sell on Etsy, and so the datestamp had been set to OFF. Today, I wanted to turn it back ON.

Twenty minutes of punching buttons, no datestamp change tool. I never had that happened on any other camera I've owned. I had to go home and download the manual, and then download a program to read it. Forty five minutes wasted, a photp op lost. Finally get into the right menu, change the date, take a test pic, and there's no datestamp on the image.

I drained an entire fresh battery searching and groping and re-taking the test picture. The drivers I downloaded already won't install. The aftermarket USB cord I bought is useless. I had to buy a PCMCIA adapter to get pictures off the camera and onto my computer. Now, no datestamp. There are ways to put datestamps on images, but why should I have to use yet another workaround because this camera won't function per the manual?

And why must the most basic camera's operation be complicated to the point that it can't be used?

Unlike many of our newer models, the older PowerShot S200 does not have a date stamp function.  The date and time cannot be imprinted directly on each image as it is taken.  This can only be done using image editing software after the images are downloaded to your computer.

Page 24 of the Powershot S200 user guide has instructions for setting the date and time.

This is a picture taken with the S200 that has a default datestamp in the lower right corner.

This is a scan of the S200's Setup menu display with arrows pointing to "Date Time" and today's date and time. 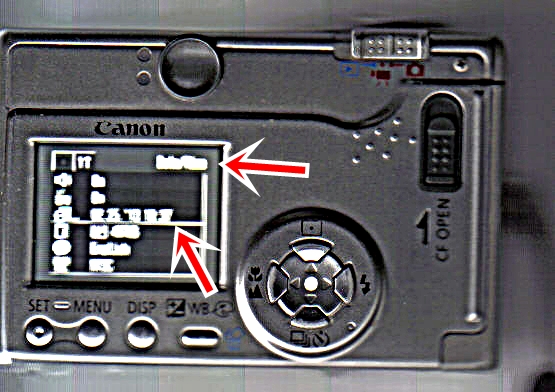 The S200 does have a datestamp function. So why won't it function?

Page 24 of the manual is for setting the shooting date and time that will be recorded with the information that is attached to each image.  This does not set the date and time to be imprinted on the image.

Then how did that datestamp get on that image? Did the camera fairy put it there? I've had to delete more than one batch of pictures I shot for Etsy because they had dates on them, and go back to the locations and re-shoot them.