On that day, a joint meeting of the French Académie des Sciences and Académie des Beaux-Arts in Paris heard a presentation by François Jean Arago, a scientist and member of the Chambre des Députés on behalf of Jacques-Louis-Mandé Daguerre. It hailed, recognized, and later purchased the patent of what was regarded as the first practically viable process of capturing, printing and fixing an image using a camera. Daguerre was given a annual pension of 6,000 Francs, while the estate of the late Nicéphore Niépce, the man who actually captured the first permanent image, received 4,000 Francs.

While many had attempted to capture an image, and a few with some very limited success, the problem of fixing an image so that it didn't fade had frustrated all until 1826 when Niépce: an inventor who dabbled in several fields, had used Bitumen of Judea to capture and fix an image of his home at la Gras. The image took days to expose, due to the slow reaction of the light-sensitive material and the results were extremely poor. Still, he had managed to capture AN image. His original image remains the first documented one taken by a camera and was sold to the Bibliothèque Nationale de France for 450,000 Euros in 2004.

Daguerre was a showman. He created amazing dioramas that stunned audiences with their 3-D and animated effects. However the cost and time taken to paint backgrounds led him to seek a way to have them created by a photo-mechanical process.

Niépce and Daguerre were brought together by a Parisian lens maker they both used. They formed a collaboration and even tried to set up a company to develop a photographic process. Their efforts were stymied by lack of understanding and interest by potential investors, and the poor results so far achieved, further exacerbated by their mutual secrecy from one another. Niépce died in 1833, but Daguerre continued his experiments and evolved a method using silver halides developed using mercury vapour. He was frustrated by fixing issues until 1835, when he discovered hypo could act to fix the image from fading away. Daguerre took multiple still-life images and used his contacts to gain the recognition of the French government, culminating in that historical announcement. The French government, in an act of artistic nationalism, made the invention free to the world, except for England - their great rival. 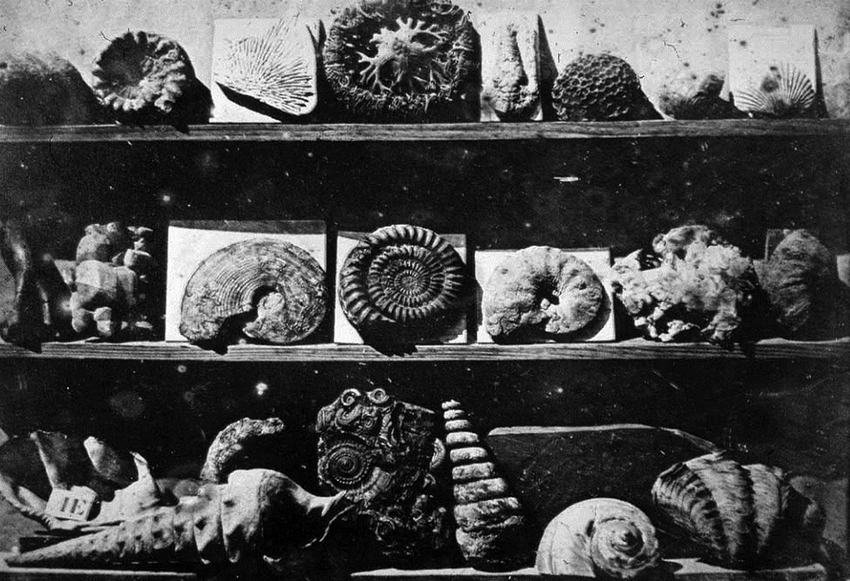 The history is not a clean-cut lineal path, however. Thirty-two individuals actually claimed to have invented the photographic process, but really only two players emerged as serious contenders. Daguerre in France, and Henry Fox-Talbot in England...

Fox-Talbot was a gentleman renaissance man and polymath, with interests in a wide range from classical Greek and Latin to the sciences and politics. On his honeymoon in Switzerland, he was frustrated at his poor efforts in using a Camera Lucida to draw the scenery of the area. He latched upon the idea of making a device record and 'draw' the image for him. He worked to that end.

He eventually created paper-based negatives from which he could make positive prints. His efforts were tiny, however, as the negatives were barely larger than a postage stamp and all images were contact prints. Furthermore, the results, using paper as a medium, lacked resolution and clarity, but were appreciated for their artistic and 'painterly' nature. Like Daguerre, Talbot had issues in fixing his image and he was aided in solving that by Sir John John Herschel, another multi-talented intellectual who had his own hand in creating photographic technologies. By 1834, Talbot was well on the way to creating a viable process when he was diverted by other things until he learned of Daguerre's invention, shortly before it was announced officially. His efforts to claim recognition were fruitless and Daguerre won the day.

Daguerre won the battle but not the war, however. The Daguerreotype produced an incredible (and not surpassed) level of detail, but it had two issues: first, it produced both a positive and negative image on the same metal plate, resulting in the image changing (rather like a hologram) depending upon the angle of viewing. Second, being metal, it could not be reproduced, so each image would be unique.

The Daguerreotype went viral and dominated the world until improvements in Fox-Talbot's negative-to-positive print methodology surpassed the viability of the Daguerreotype and went on to form the basis of film photography until today.

There is much more to this story, and if anyone is interested, I recommend the following references:

Before you ask us, have you looked in the manual or on the Canon Support Site?
"All the beauty of life is made up of light and shadow", Leo Tolstoy;
"Skill in photography is acquired by practice and not by purchase" Percy W. Harris
Me too
1 Like
Reply
0 REPLIES 0