What setting should I use to take pics of moon/stars w/ Canon Rebel Xti so don't get shadowing?

We need a lot more info about your equipment (lens or telescope) hand held or tripod or better yet polar mount ( I think that's the right name) & what you mean by shadowing.

Here is a picture I took last evening with my 7D and tripod. 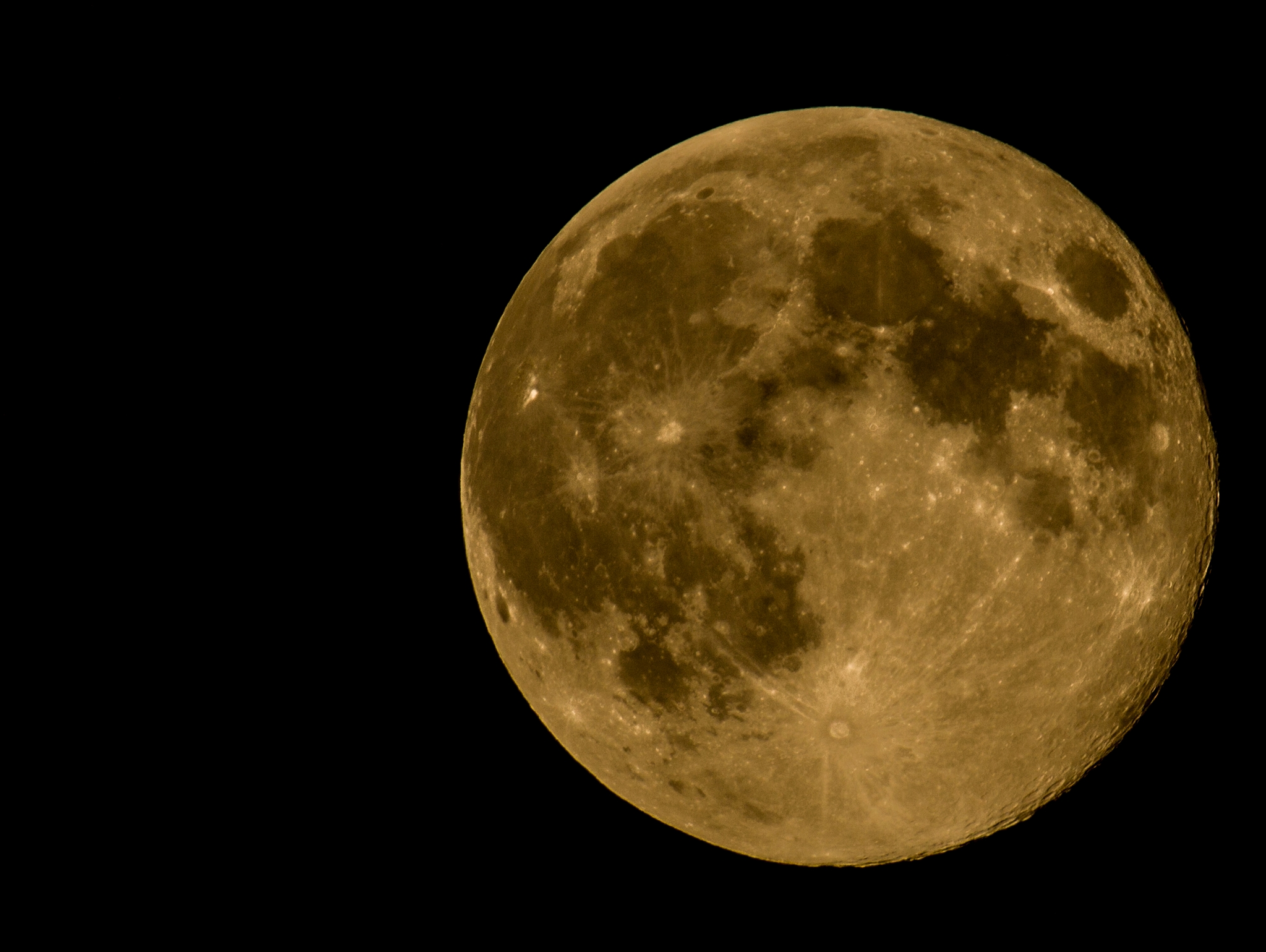 There are general rule to exposure for the moon:

f/8, 1/100, ISO-100 for Full Moon
Note, this is a general rule, a good starting point just like the Sunny 16 rule. Also note that this is for capturing the moon only and not the moonlit landscapes.

It turns out, the moon is in "sunlight" - that's why it's illuminated.  There's a "rule" for the moon... sometimes called the "Loony Eleven" rule.

Normally the rule for outdoor sunlight is to use the "Sunny 16" rule.  That rule says that when something is in full mid-day sun, you can set the f-stop to f/16, then set the shutter speed to the INVERSE of the ISO speed.  E.g. at ISO 100 you can use 1/100th second exposure at f/16.

But the rule is a "baseline" and they choose that rule because (a) the name is easy to remember... it rolls off the tongue, and (b) only at f/16 is the shutter speed always the inverse of the ISO setting.  But you don't have to use f/16... you can use any "equivalent" exposure.  E.g. you could use, say, f/8... which is two full stops open from f/16 -- but then compensate by changing something else... in this case you could increase the shutter speed by two full stops and shoot at 1/400th.

While the moon is in full sun and you'd think you could use the Sunny 16 rule, but the moon has low "albeido" -- meaning it's actually darker and less reflective than you might think.  This means a technically correct exposure would leave the moon looking pretty dark (because it actually is pretty dark.)  One full stop down from f/16 is f/11 and this compensates rather nicely.  They call this the "Loony 11" rule (which is also a catchy easy-to-remember name for the rule.)  At f/11 you can set the shutter speed to the "inverse" of your ISO setting.   e.g. f/11, ISO 100, 1/100th sec would do it.

Use this "Loony 11" rule as your "starting point" but recongnize you may need to adjust the exposure -- but it will probably be a pretty good starting exposure.

If the moon is low in the sky (near the horizon) the light has to travel through a lot more atmosphere.  The moon will appear dimmer (and often yellow or orange)... in which case you'll need to increase the exposure.  You want the moon to appear 'gray' -- not white.  This way you can see detail on the lunar surface.

One last thing... astronomers watch for a condition called "seeing" and try to avoid taking astro-images on nights with poor seeing.  "Seeing" is really atmosphere disturbulances (mostly upper atmosphere turbulance and temperature changes) that distort light.  The analogy we use is to imagine a penny in the bottom of a swimming pool.  If I had you a pair of binoculars and ask you to read the date stamped on the penny and the water is perfectly still, then you will be able to read the date.  If I beging to make waves in the pool, you'll be able to see the penny... but you'll never see it well enough to read the date.  That's "seeing" conditions in a nutshell.  It turns out a night with poor seeing (and especially if the moon is near the horizon), it can be extremely difficult to get a tack-sharp image of the moon.

Here's a moon photo... but this was taken with a Canon 60Da through an apochromatic refracting telescope: 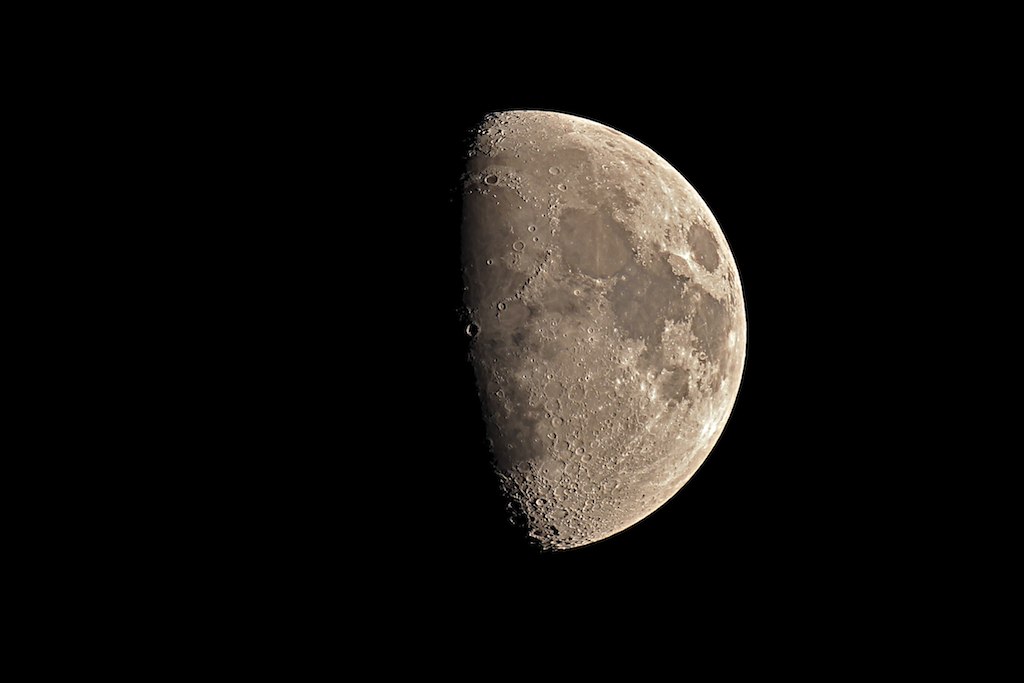 Just adding an opinion, but I think shots of the Moon in various phases, such as the near first quarter shot TCampell posted above, are the best.  Crater and mountain shadows from the side lighting make for a much inspiring picture.

BTW, if you do want a full-moon photo of moonrise -- over some landmark (e.g. a city-scape, landscape, etc.) two tips:

If you shoot the night before, the background sky will be dusky blue.  Usually the images look better -- the sky wont be completely black.

2)  Know where to stand.  To do that, you can get an app for your mobile phone (someone put me onto an app named "Sun Surveyor" -- that's the one I use) or use The Photographer's Ephemeris.  The apps are cheap (I think the 'desktop' version of The Photographer's Ephemeris is free... but you have to pay for the mobile versions.)  In any case... you drop a push-pin on the map showing where think you need to stand (you don't have to be accurate)... the app will show you the positions of sunrise/sunset moonrise/moonset relative to your position.  SO... if there's a landscape you want, drop a pin in the "approximate" position, it'll show you the actual position of moonrise... then move your pin until the line showing the direction of moonrise crosses above the position on the landmark where you want to to see the moon.  The app basically shows YOU were you need to setup your camera to get the moon at that position.

Personally i agree with fyigmo63... the moon looks more dramatic when it's near you can see the limb/terminator separating the day/night sides of the moon.  Since the sun is off to one side... you get nice long shadows which really helps show off the three-dimensional texture of the surface.  At the full-moon, the sun is basically directly behind you... providing a "flat" disc that appears 2D and not 3D.