I am a travel writer and will be taking part in a press trip this March to the Galapagos islands. I recently upgraded from a T1i Rebel to a T5i with a Canon 18-135 zoom lens, and am loving the quality of the images.  However, I believe I do need a stronger zoom to capture close ups on this trip. Caveat:  I am much more of a writer than a photographer, to be sure, but these days, editors want your own photos to accompany articles, so I am truly learning the trade as I go along. I need an easy, light, and SHARP lens, within a budget.

I didn't come to this site before doing an extensive on-line search for recommendations. Despite my efforts to come to a consensus, I am getting so many varied recommendations, I thought I would reach out to the kind photography experts on this site who graciously donate their time to help neophytes like myself. THANK YOU in advance for your guidance.

Here is what I gleaned from a week-long search:

All these zoom models seem to have good reviews:

The Tamron 28-75mm f/2.8 lens also got stellar reviews, but how would that improve upon my current EFS 18-135 mm lens (which is awesome!I ) I don't know how close I will get to wildlife, so that is an issue. Another issue is the fact that I need to travel light--backpack and carry-on, and cannot bring a slew of lenses with me.

I would be so grateful for some directions from experts.

Thank you so much for your feedback. This forum is wonderful, and I appreciate it very much!

"I need an easy, light, and SHARP lens, within a budget".

For only $50 more you get even more more sharpness, and a lot more functionality, with a non-rotating front element and the excellent STM auto fococus.

When we look at a comparison between the 55-250mm IS STM and the 55-250 IS II, the new lens is looking remarkable. The STM delivers significantly better image quality than the IS II from 135mm through 250mm – even when stopped down to f/8. The improvement can be seen in the center of the frame and the difference in the corners is dramatic.

After using this lens a healthy amount including on a couple of short-duration trips in addition to locally, I have to admit that keeping this lens in my kit has been a consideration for me. The results it delivers are quite good. The 55-250 IS STM is a very good option for those times when traveling light is very highly desirable including trail running, hiking, traveling, etc.

For a light price, you get a light lens with a useful telephoto zoom focal length range, a compact design, quiet operation, image stabilization, good AF performance and impressive image quality at a value price point. 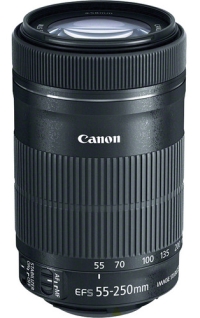 However, the only, really true star performer on your list is the 70-200mm f2.8 L IS. This is the best lens of it's type made. Period!  Bad news, it is very expensive but the best usually is.

My second choice in this same category and well worth considering is the Sigma 70-200 f2.8 EX DG OS HSM.

The problem is you are simply not going to get as much coverage with just one lens as you can with two.

Another off-brand lens that has caught my eye lately is the Tamron 24-70mm f2.8 Vi DC USD.

The Tammy and the Siggy would make a fine duo and still not deplete the budget to the breaking point. Plus give you the wide coverage and low light ability you could very well need.

The Tamron AF 18-270mm and the Sigma 18-250mm may get good reviews, but only for the class of lens they represent. These lenses cover a very large focal length and as a result are a compromise between sharpness and convenience. They will not be as sharp as the 18-135 STM that came with your T5i, or the 55-250 STM I recommended.

Do you want a "one-in-all" lens so you don't have to change lenses? Or are you willing to carry two lenses and change from a general purpose zoom lens to a telephoto zoom lens when needed?

Do you need a fast aperture like f/2.8 for indoor shots?  Or will most of your photos be outdoors in good light?

Also, how much are you willing to spend?

IMHO, as always, if I were making this trip, I would not trust it to just any third party lens.

The ones, and only the ones, I recommend, I have used personally.

Again, IMHO, third party, off brand lenses are a gamble at the very best. Some are not worth the shipping box they come in. Again, IMHO, there are only a handful of off-brand lenses that are even worth considering.

If you do happen to feel an off-brand lens is for you, make sure you check it out thoroughly well before your trip. There could be focusing issues and/or OFF issues. It could not work at all with your camera.

Wow, I went to bed and when I rose, I already had all this excellent information!  You all are THE BEST. I will spend my day going over all your sage advice. To quickly answer your questions, my budget is $500-600 so there looks as if there is some choice below. What do you all think about buying used lenses from a qualified source (which is?)? Then, I might even be able to afford  two. Ideally, one killer lens that does everything would be best, but I think that is a dream.

Finally, I can't imagine I will be doing much low-light shooting, as the excursions are during the day. So low light photography is not a concern.

THANK YOU ALL for your time and advice. This forum is exceptional and I am so glad I found it.

Never, I mean never, buy an off-brand lens used. Only, and I mean only, if you know the source and it's history very well.

The reason many folks get rid of them is, they simply don't work and they are trying to unload them. Except for Sigma, and only recently for Sigma, warranty is a crap shoot.

With a tight budget of $600 bucks I suggest you use the lens you have and save the money for a later purchase when you might be able to fortify it a little.

Yes, thanks for your thoughts on that.....I kind of had the same feeling, but just wanted to check with the experts.

I just read a few reviews and watched a video.

I am pretty convinced I have to go with the 55-250 STM because (and I am sorry I didn't think of mentioning this) I need to also produce a few travel videos. It seems this is the only lens that is totally quiet in the camera's movie mode. I could kick myself now that I didn't buy the T5i kit with both lenses and save some money.....Oh well, lesson learned.

Thank you all so much....I think I have my problem solved. I'll post some photos upon my return!

The 55-250 STM is a nice lens for the money, but if it were me I'd want something considerably longer for use with wildlife.

Something you might consider.... Rent a better lens just for the trip. If that's an option, I'd suggest the Canon EF 100-400L IS USM for your purposes. A couple things about rentals: You might want to get it a couple days in advance to be able to learn to use it well. There also might be limitations on some rentals about travelling internationally with them.

I don't agree with ebiggs about not buying used 3rd party lenses. I have done so many times without problems, although the majority of what I currently use with my Canon cameras are Canon lenses (some bought new, some bought used). You only have to be extra careful with older 3rd party lens models, that might not be compatible with newer cameras. If you were buying a used version of a lens that's still in production (such as the Sigma 120-400 OS), there's little to be concerned about.

With any used gear, you have to be careful about the source and return/warranty policies of the seller. Reputible stores such as KEH.com, Adorama and B&H Photo Used Dept.carefully check out gear before selling it, offer a condition rating system that's quite conservative, give a 14 day right of return no-questions-asked, and in most cases give you at least a 6 month warranty.

I've bought more than a few things off Craigslist, too.... Which has to be done in a safe, public place (such as a bank lobby). This has the advantage that you can try before you buy. You do need to know how to check out whatever item you are considering and be ready to walk away if it isn't up to expectations.