I am a newbie when it comes to good photography. I have been unsuccessful in taking a good picture of the moon, although I can see the surfacew featurees clearly in the viewfinder of my Canon EOS Rebel T6i. Every time I take a picture, all i get is a white blurry disk even after putting the camera on a good stable tripod. I am using a Canon EFS55-250mm lensin the autofocus mode and stabilizer on. I have tried different modes, turned off the flash, but no success yet.

Can you please provide me with any tips that could help me resolve this issue? I would really appreciate that.

First thing I would suggest in addition to the tripod is a remote shutter switch, either wired or wireless they are not expensive. That will remove any chance of movement while pressing the shutter switch at long zooms and slow shutter speeds

If you have a "white blurry disk" you need to turn down the exposure 1 - 2 stops. Make sure that it follows the "looney 11 rule."  (google it) (You can just use manual with this rule, too.) You could also use spot metering.

Start with the Looney Rule, f/11 at ISO 100 and 1/100th second shutter speed. It is similar to the Sunny 16 Rule except for full Moon shots.  I would use manual focus.

However, the "I am using a Canon EFS55-250mm lens", is way too short for Moon photos. Consider getting a longer FL telephoto lens.  Any of the super zooms in the 150-600mm range are good. Even more FL than 600mm is nice but that usually involves a real sky telescope.

I must admit I have never actually used any of the suggested recipes for attempting a good moon shot.  I have simply gone to manual and changed the exposure settings as required to get the desired level.   That is not to say that the advice you have received is not valid.

As regards focal length, I have neverr tried shooting the moon with a short telephoto like the 55-250.  I have generally done it with at least a 400mm on a crop sensor, giving a Field of View equivalent to a 640mm lens on a full frame camera. This was taken on a Canon 7D with the 100-400 lens at 400mm (640 Equivalent FoV) and it was fairly heavily cropped to get this result, what saved it was the large sensor size and good lens optics. 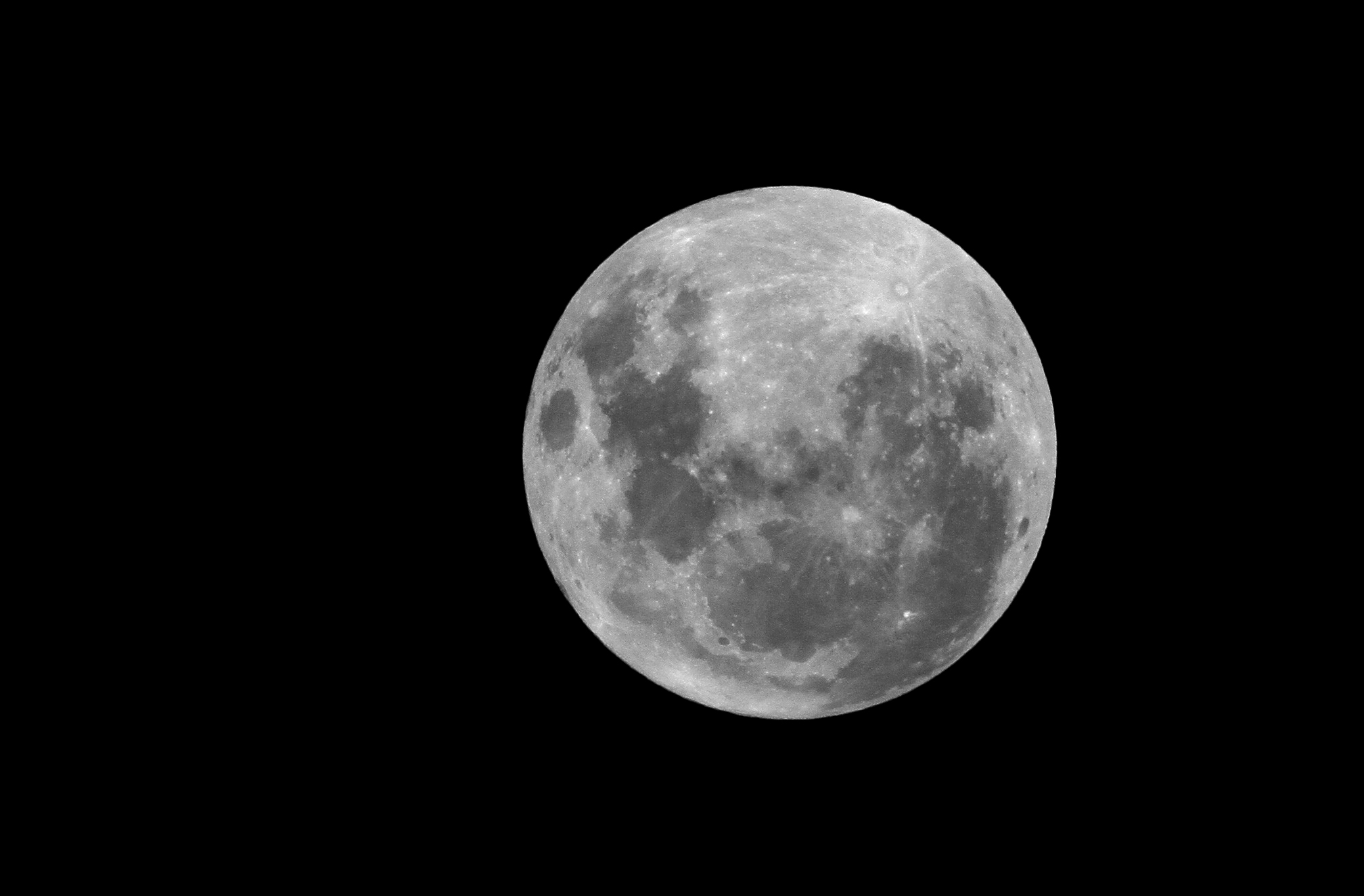 Moon shots are one of those that suit a superzoom camera like the PowerShot SX series - the subject is bright and a long way away.  I enclose a shot taken with the PowerShot SX50HS at full extension of 1200mm equivalent. 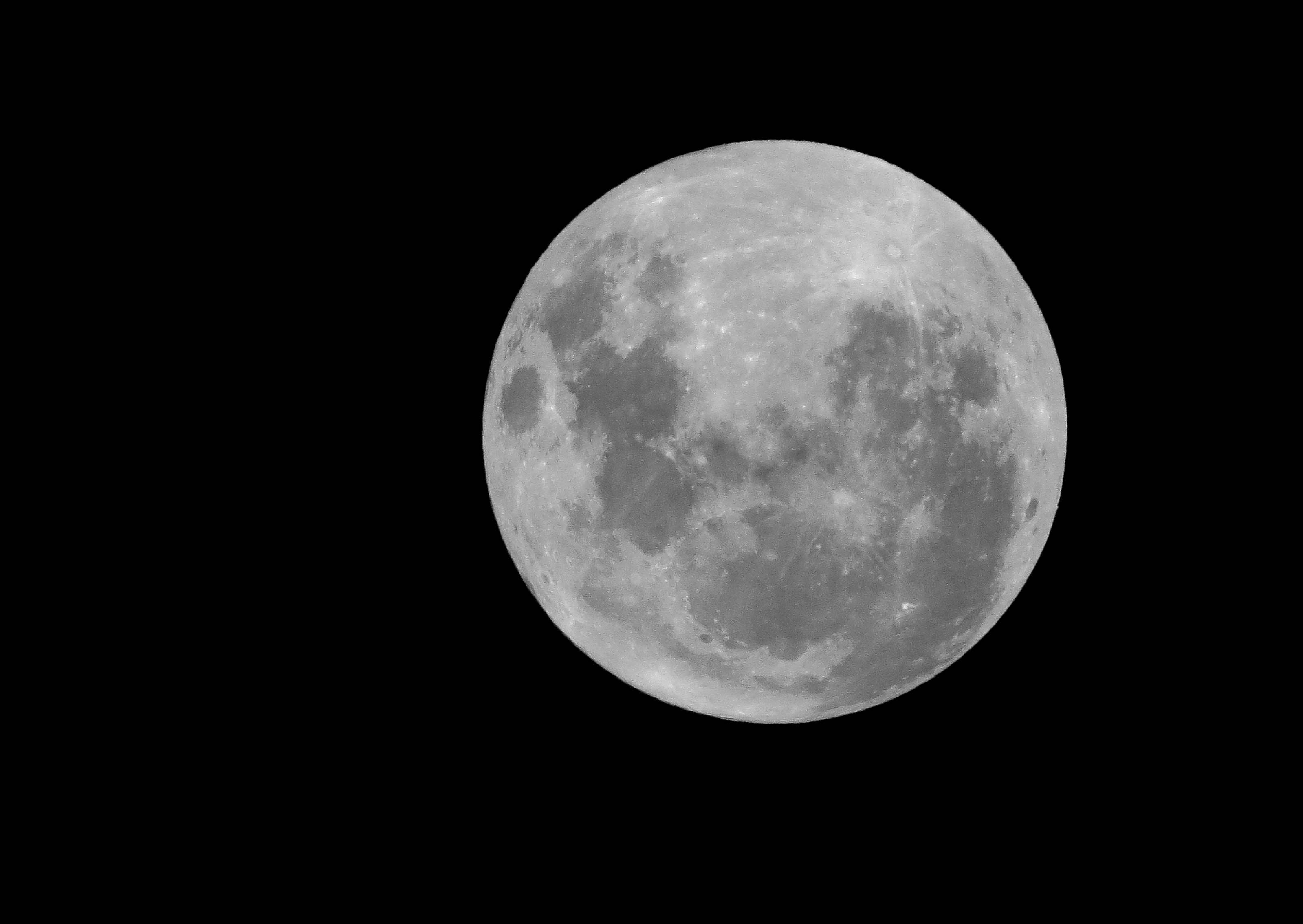 Sometimes shooting the moon at a time when it is not full can render better results: 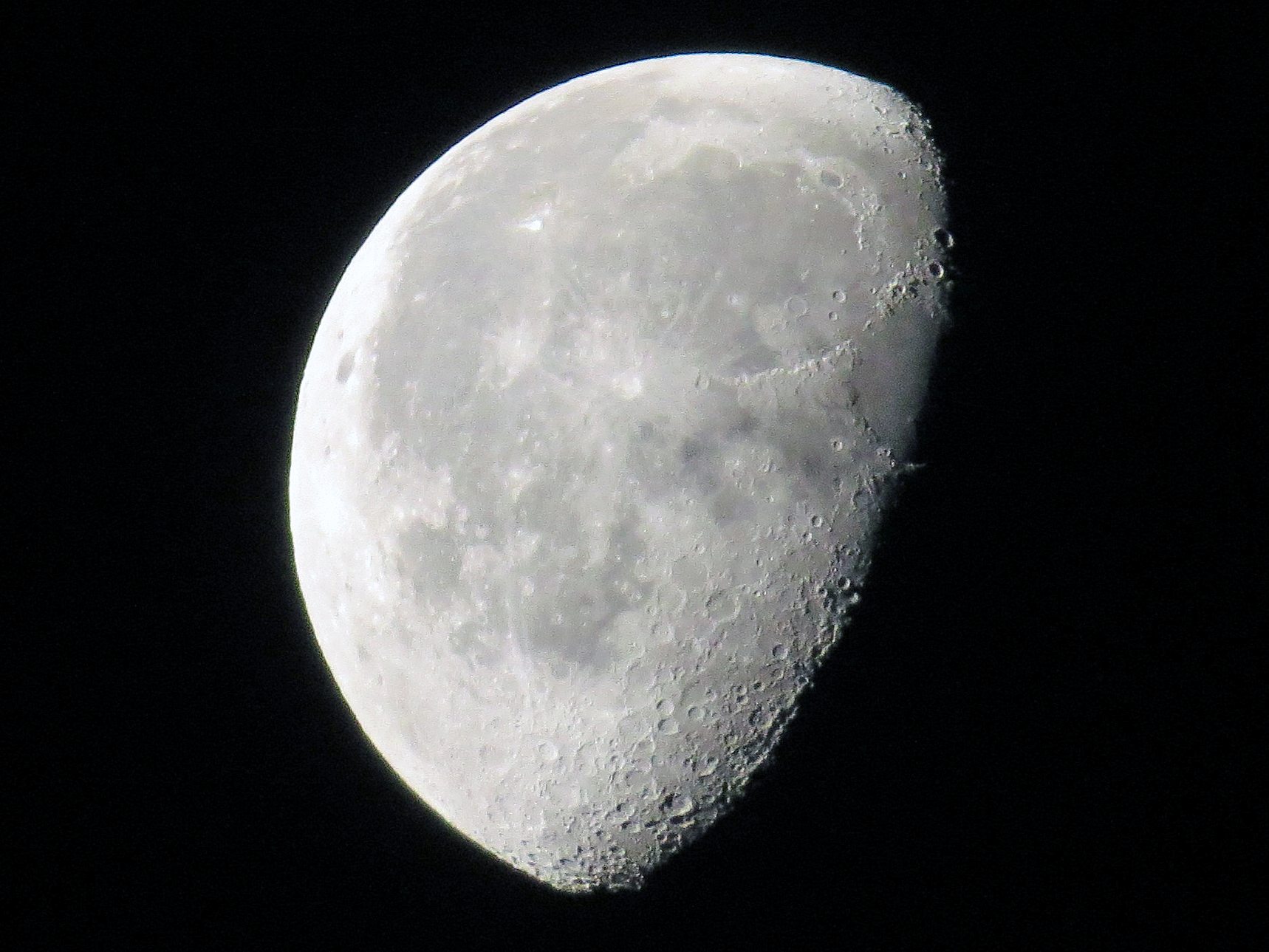 In this case the angle of the moon was assisted by a very clear night - atmospherics such as temperature, fog, smoke, humidity and pollution (light and other) can play a big part in how astrophotography comes out.  I tried for several nights to get one that had the least possible interference and the angle of the sun reflecting off the moon offered a less harsh contrast.

You might notice that the moon seems upside down in the last photo because it was taken from the other side of the world!

The metering system on the camera is fooled by the scene into taking an over-exposed shot (hence the white blurry disk).

The camera's default metering mode is called "evaluative" metering.  Imagine breaking the entire scene up into a grid and taking a light meter reading of each square on the grid.  For most normal photography this works well because the camera finds the brightest and darkest spots and tries to come up with a good middle-exposure so that nothing is particularly over-exposed or under-exposed.

The problem is that the camera assumes nothing is truely "black" and wants to bring things up to a middle-gray value.  The background of space, however, is pretty black.  The camera is sure it *must* be brigher so it tries to compensate by increasing the exposure.  This reults in over-exposure.

The moon isn't the only thing where you'll run into this.  I run into it doing concert photography (bright lights on the performs compared to a relatively dark (black or near-black) room.  You can learn about the camera's other metering modes such as spot metering, center-weighted metering, etc. and use those modes when you want the camera to just meter a specific part of the scene and ignore the parts that are going to throw off the exposure.

Anyway ... that's why the exposure comes out wrong.  But it turns out that the exposure for the moon is well-understood.

The Moon is lit by the Sun and the Sun provides a very consistent amount of light that really doesn't vary.  This means there's one exposure value for the moon which is consistently accurate.  This is where the "Looney 11 Rule" comes in.  This exposure guideline suggests you set the camera to f/11 and set the shutter speed to the inverse of your ISO setting.  E.g. at ISO 100, use 1/100th sec.  At ISO 200, use 1/200th, sec. etc.  and this rule works very well.

One caution ... you're going to get what may appear to be an under-exposed moon.  It is not under-exposed.  The Moon really is a dim gray.  Only about 1/8th of the light that hits the surface is reflected back.  It's roughly the reflectivity of an old asphalt road.  Once you have this image, you can adjust your white & black points to stretch the contrast to get a result with a bit more pop.

The next time you are out with friend and you see the Moon, say something like "hmm... I think that looks like it's probably just about f/11 for 1/100th of a second ... if I use ISO 100.  Let's see."  (act like you're vacillating a bit before settling on that exposure).  Then set the camera to manual, dial in the exposure, and NAIL the shot.  They'll think you're a photographic genius!  (until they learn your secret.)

BTW, this wont always work.  When you shoot most typical photos, your subject is usually not very far away.  You are shooting through a few feet of air.  Even in a lanscape photo you are shooting through thousands of feet (to perhaps a few miles) of air.  But you might notice in some landscape photos that unless the air is spectacularly clear, those most distant mountains look a little hazey.  That's impurities in the air (dust, moisture, etc.) which are absorbing some of the light.

This concept is called "atmospheric extinction" (the extinction of light caused by the atmosphere -- more accurately by the impurities in the atmosphere).  Some days the air might be more or less clear than on other days ... which means this can vary from day to day.

This is to the say the Looney 11 rule mostly does "just work" when the moon is fairly high in the sky.  But if the Moon is low (catching the moon just rising) you'll probably need a longer exposure.

But the Looney 11 rule will probably be a pretty close starting point.

One other consideration (since we're on the Moon).  You mentioned you have a 55-250mm lens.  The Moon is about 1/2° wide from edge to edge.  The angular field of view for a 250mm focal length on your camera is 5.2° wide by 3.4° tall.  This means that even in the narrow direction you can fit just about 7 moon diameters.

An 1800mm lens is 1/2° wide in the narrow direction (but that would leave no room in the frame).  Generally you wouldn't want to use anyhing more than 1500mm but I find that even 1200mm is a nice framing.  The point is... 250mm is going to be a fairly small moon.  But you can get creative by framing the moon with other stuff in the scene.  Imagine a moon-rise over a city-scape.  Or a moon-rise over a mountain-landscape ... or a forest, etc. etc.

If you shoot these scenes on a night of a truely "full" moon then the moon doesn't really get high enough until the sky is black.  The moon rises about an hour later each night (more like 55 mins) ... but that means if you go out the evening BEFORE the night of the "full" moon (according to your calendar), then the sky will probably be dusky blue in that that "blue hour" (which really only lasts about 20 minutes) will give you better lighting on your landscape to light the scene.

For pictures which feature only the Moon against a black background ... the Moon photographs better when the sunlight is coming from the side (e.g. near a first quarter or last quarter phase).  This causes the mountains and craters to cast more dramatic shadows so you get more of a 3D texture.  If you shoot when the moon is "full" you don't get these shadows so the moon looks a bit flat / 2D. 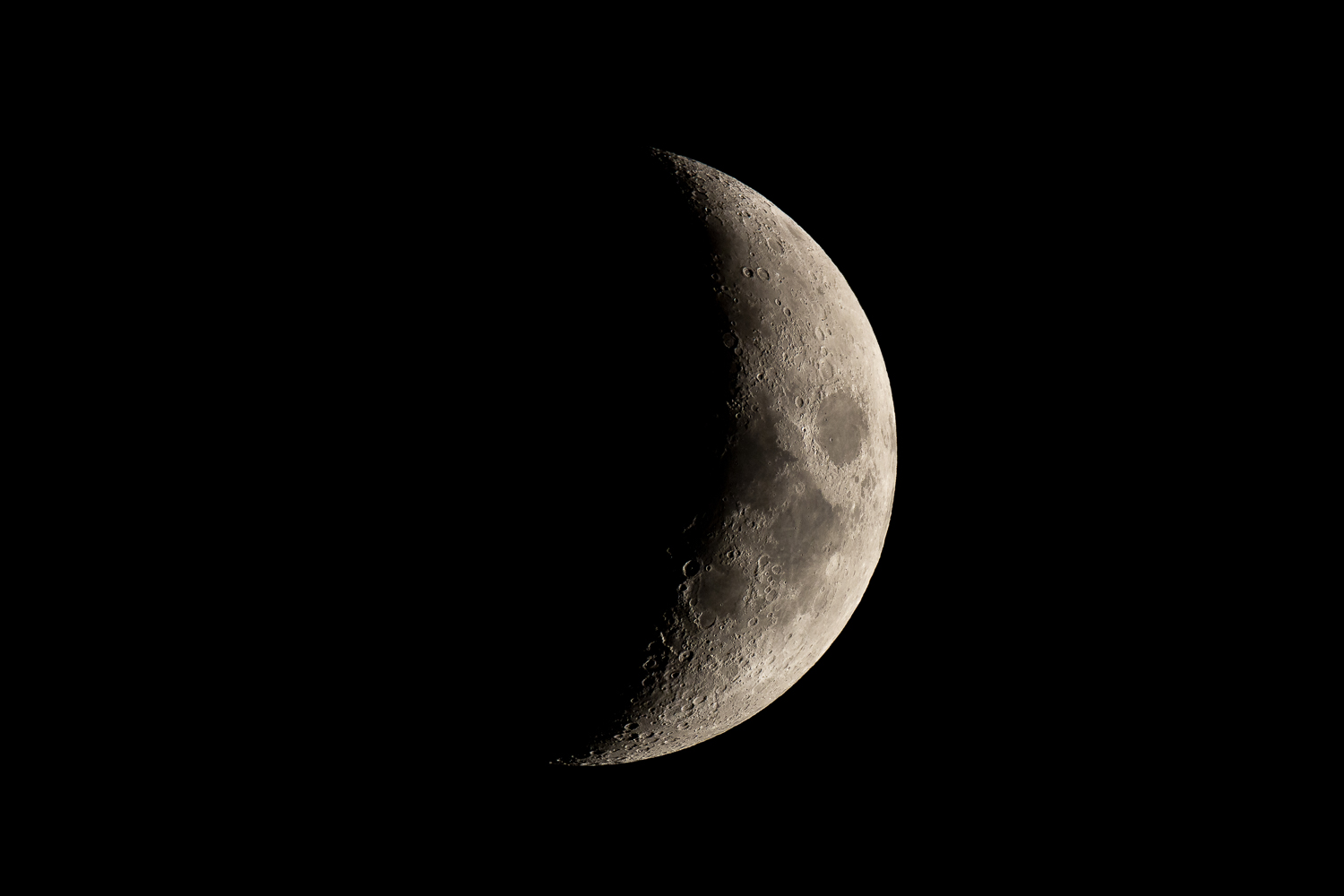 This is a Looney 11 exposure ... but I have stretched the white-point to increase the contrast.  (straight out of the camera will not look this dramatic ... but it's a very easy adjustment provided you didn't start with an over-exposed moon.)

Thanks to everyone for their advice, and tutoring. However, it has been cloudy or rainy at night ever since I poseted my query. I have to wait for clear nights in order to put that in practice. Only then can I really apply the acquired knowledge. I promise to let you all know how it turns out.

Cool! Let us know. Thanks.

Remember, it does not matter what phase the Moon is in. The exposure should still closely follow the Looney 11 Rule. As the phase changes, you photographing a different size piece of the same thing.

Try to shoot it when it is highest in the sky. It works better to keep your tripod center column lowered, too.

Keep in mind it is going to be difficult to impossible to get the results Tim Campbell does with that lens.