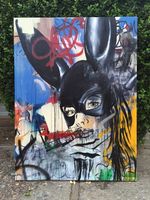 My 70D that is only 1yr 1/2 old died all of the sudden.  I have only used it lightly and have taken very good care of it.  I tried another battery thinking that may be the probelem.  Even a brand new Canon battery did not turn it on.  Just no juice, nothing.  I sent it to Canon service center, and they sent me an estimate for $224.  I called to ask what the problem was, they said they still dont know, that  was just to take a look and fix the issue if there is one.  If it is something with major damage they will contact me with a different estimate.

It worked perfectly fine one day.  I charged the battery back up, plugged it it, and just never turned back on again.  I haven't even paid off the camera yet on my best buy card, so I have a real problem with Canon charging me anything so soon, and for an obviously lightly used camera.

Has anyone had a similar issue before?  Is having Canon do this my best option?  I read another post of someone who fixed themselves, but I'm of course leery not knowing exactly wha the problem is.  Plus I have shoots lined up, and need to act fast.

I wish they had a better program to just trade up or something, if I'm spending money anyway.

I sent the camera to a local repair facility who claimed to be an authorized Canon repair center. They emailed me stating that it needed a new motherboard, although I already figured that after my research online. They said it would need to be sent to Canon for repair. I called Canon who told me they hadn't heard of this issue before and the facility I sent it to was not an authorized repair center?

I have been waiting for Monday to get my camera sent back. I will not give Canon another dime. I will sell all my lenses and then I do not know know what after that. I have practically gone broke buying gear from them. This is just WRONG. I will keep you posted.

I agree, I had mine a year and a half very light use and took very good care of it and it died. Just got the bill $449. Is there nothing that can be done? You would think Canon would help with the labor part of the bill $209. I should have listened to my friends and bought a Nikon, oh well you live and learn I guess.
0 Likes
Reply

I was wondering if you ever resolved your issue? Did it end up costing you $400+? I'm having the same issue. 😕

I would just like to add myself to the growing list of users experiencing a dead 70D after an Err 80. I have owned my camera for just over 2 years. I primarly use the camera for video, occasionally use it for photos.

When the 70D started acting I was taking a few photos. While lining up a shot, the preview image on the LCD screen froze and the camera became unresponsive. None of the controls would respond, not even the power switch. "Err 80" on the top LCD.

I did the usual troubleshooting techniques listed on this thread. I also travel with 3 fully charged batteries and 2 SD cards. I was able to bring the camera back to life 3-4 times. It continued to freeze up after a few seconds and show Err 80. Eventually, I couldnt turn on the camera anymore. Totally dead.

I just sent the camera into Canon for repair and received an estimate of $444.69 to replace the mainboard. No explaination of why it died. I am very frustrated that Canon is not owning, what appears to be an obvious hardware flaw. I expected better quality from Canon.

You can find a brief explanation of what "Err 80" means at the above link.

Be aware that shooting video can generate more internal heat than shooting photos.  If the camera works for a brief period, and then goes into a failure mode, that would suggest some component is intermittently failing, possibly overheating.

Seeing how you have a significant investment in your camera, I would suggest that you let Canon make the repairs, not any other third party.  Canon will go through your camera and bring back to factory specifications.

The alternative is walk away angry, and spend at least 2-3 times the repair cost on a new camera body.  And, if your new camera body is not a Canon, then you will need to buy a new lens, or lenses.

In other words, the path of least resistance, or cost, is going to be getting your current camera repaired.

Waddizzle, do you realize this is Canon's fault, and camera was praised for it's video capabilities. No 60D has had this problems after mucho more video usage. If Canon repairs it to same factory specifications (or using the same flawed motherboard) it will probably fail again after their fix warranty. Canon Brazil already is repairing the Cameras at no cost after much complaining (and probably law enforcement). Canon has already repaired defective (Sony) sensors at no cost on S1-IS and others. We users must complain, it's unacceptable that such an expensive body has this design flaw.

You can also see other similar Canon cases here http://www.techhive.com/article/124765/article.html

"Waddizzle, do you realize this is Canon's fault, and camera was praised for it's video capabilities."

No, I don't assign fault, or blame, to anyone.  We just don't know enough, nor even if there is significantly high rate of failure. Reading about users sharing similar stories is NOT proof of a factory defect.  It is more self fulfilling prophecy than actual fact.

"If Canon repairs it to same factory specifications (or using the same flawed motherboard) it will probably fail again after their fix warranty."

That is a false assumption if I have ever heard one.  Do you have any basis in fact to support that conclusion?

"We users must complain, it's unacceptable that such an expensive body has this design flaw."

Ranting on a user forum is not the proper "forum" for such complaints.  Organize yourselves and confront government regulators and law enforcement, much like you said Brazil did.

That is only with latin members.

There are more than 1370 people with the same problem, that is only solved if you pay 400 bucks after using the camera for less than 2 years.

So, this is a TOTALLY fault of the Canon company.

They should have done the recall long time ago.

Now, many people are leaving the Canon trade. So they pay it in a good way, or in a bad one. Bad marketing.