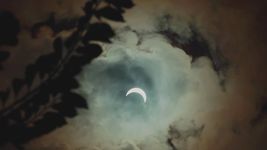 Last night i was trying to capture milky way and stars for the first time and i read i need to have my focus / lens set to infinity in other lens there was a symbol to represent after chaning it to MF but in all my canon lenses 18-135 STM, 10-16 45 Wide angle and in 50 MM prime i could not set this and i own 70 D.

It would be really helpful if someone can tell me how we can achive and how to do this in those lenses , i was able to caputure it but it was completely blured and it was messed up.

Because temperature can move thing around inside the camera there is no hard infinity stop.

But there are several ways around this:

You need to focus manually enter by the viewfinder or liveview. Focus on any bright star. Everything will be in focus.
EB
EOS 1DX and 1D Mk IV and several lenses!
0 Likes
Share
Reply

In challenging conditions...the auto-focus can be fooled.  You should do what was suggested.  Switch over to manual focus and do it yourself.  Don't rely on the infinity mark either.

What I always do when I have time is to turn on live view, magnify the image by 10 times then manually focus (in your case) on a star.  That way you get absolutely good focus.

How long was the exposure? Can you show us the shot?

You dou know that exposures of more than a few seconds will cause star trails, right? 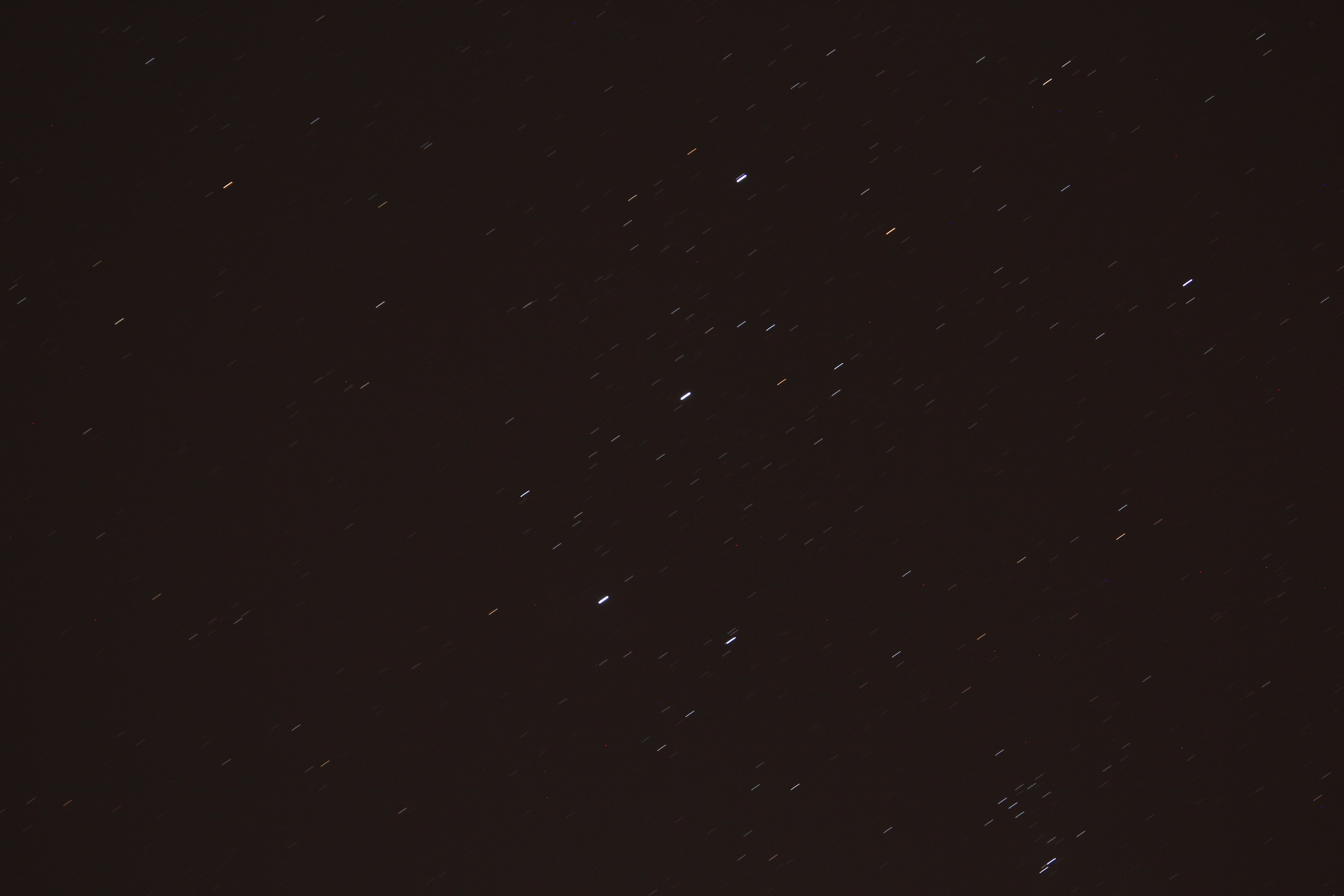 Without a tracking head, the best option in your lens lineup is the 10mm.

You have to focus manually and it is difficult and often involves a bit of trial and error.

You'll have to invest the time to focus before shooting and it may take 10 minutes or so to refine focus to a point where you're happy... focus as close as possible then take a test shot (I crank up the ISO to max to decrease the exposure time for these test-shots) then very very gently tweak focus (remember which direction you adjusted) and take another... then compare to find out if you're getting better or worse.  Keep working it until you're happy (again... this will take a while.)

But those 10 minutes or so of time investment on refining focus will be rewarded ... return the camera exposure to more sane settings (so you're no longer shooting at max ISO) and start taking the shots you want -- confident that you're images will be nicely focused.

Since the Earth is spinning (we rotate from west to east at a rate of 15 arc-seconds of angular rotation per second of real time) the amount of movement for any given star depends on angle of view for your lens/camera combination.

Youi can go much longer IF your camera is mounted to a tracking head.  You can also use longer focal lengths and get much more detail in the sky.  Here's a shot I captured using a tracking head... and a 135mm lens. 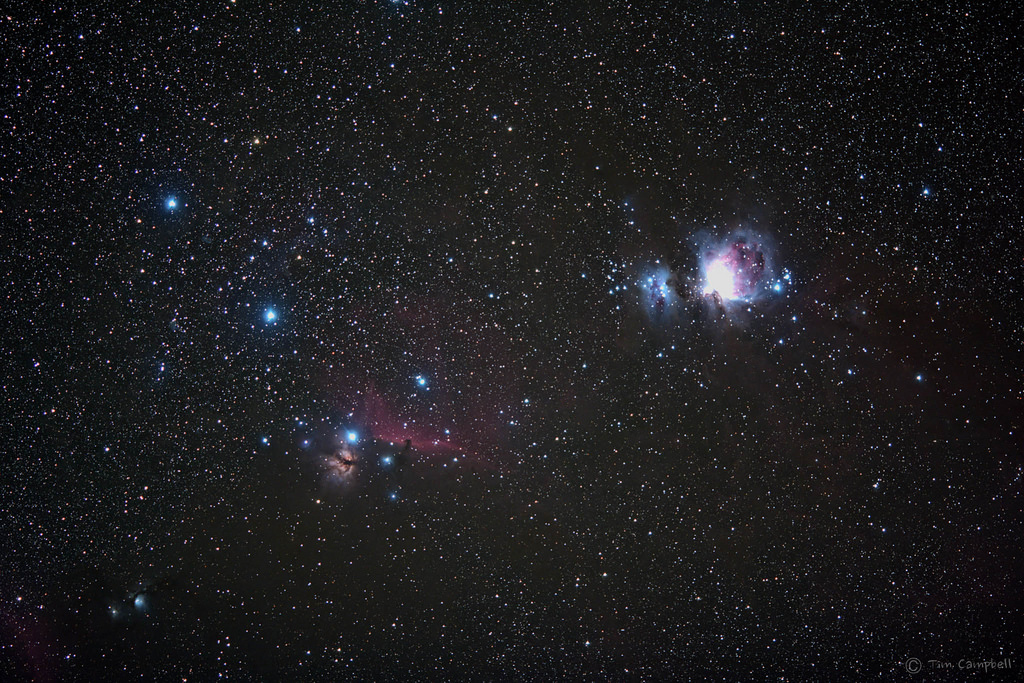 Without a tracking head, the longest shot one could reasonable catpure on an APS-C body (this was captured using a Canon EOS 60Da body) would be 312.5 ÷ 135 = 2.3 seconds... not nearly long enough.  But with a tracking head the shot can be many minutes long (notice there is no Earth landscape in this image - it's all sky).

The market has evolved a bit since I first started offering advice on this and now the two major vendors for tracking heads (the popular models) are:

2)  The "SkyTracker Pro" head by iOptron

Both of these are heads which attach to a photo tripod (preferably a solid photo tripod).  The head is tilted to point at the celestial pole (they come with aids which help you align them) and this way the axis of the head rotation is parallel to the axis of Earth's rotation.  As the Earth rotates from west to east at 15 arc-seconds per second, the tracking head rotates form east to west at 15 arc-seconds per second... cancelling out the rotation of the Earth and allowing you to take very long exposures of the sky with tack-sharp results.  (I've done 8-minute exposures without the tiniest hint of star elongation).

That 15 arc-seconds per second rotation speed is also called "sidereal" rate (pronounced "sid EAR ee al").  "sidereal" means "of the stars".  The greek word for iron was "sidero".   And since meterorites "appear" to be the remains of falling stars (we now that's not really what they are, but it is a long-held belief) and are mostly made of iron, they assumed that iron came from the stars (and that part is true, but the process by which it happens is a bit different then they understood).  So anything related to the stars was called "sidereal".  "Sidereal rate" is the rate at which the stars appear to move across the sky.

If you want landscape in the image, then the stars will be sharp and the land will be blurred (because the head is rotating).  But   I think both of these heads have a 1/2 sidereal speed.  This is a great compromise speed because while it's not fast enough to keep up with the motion of the stars for any length of time, it does DOUBLE the amount of time you can image before the stars appear to elongate.  So if you were previously only able to image for 30 seconds, now you can image for 60.  And the land will appear to twist... but that same rule applies... you can go the same length of time before the landscape appears to blur.

Maybe an old post but still useful. Today, I was trying full moon and came across 10x zoom but as soon as I press the shutter it goes back to normal zoom and takes tiny moon picture on 18-135mm USM. I am gathering knowledge for Milky Way shoot and to ensure I understood right the infinity is: on tripod manually focus on moon/Milky Way stars then zoom to 5x then 10x then again adjust focus again is the infinity setting although when we press the shutter the star trails maybe smaller? Just a newbie I am.

@rajmca05 wrote:
Maybe an old post but still useful. Today, I was trying full moon and came across 10x zoom but as soon as I press the shutter it goes back to normal zoom and takes tiny moon picture on 18-135mm USM. I am gathering knowledge for Milky Way shoot and to ensure I understood right the infinity is: on tripod manually focus on moon/Milky Way stars then zoom to 5x then 10x then again adjust focus again is the infinity setting although when we press the shutter the star trails maybe smaller? Just a newbie I am.

Unlike many “point and shoot” cameras, DSLRs do not have digital zoom, only optical.  The magnified view in Live View mode is useful only as a manual focusing aid or focusing check.  As you have discovered, the camera will always capture images using optical zoom.

Two things, first, I don't think you totally understand how your DSLR works. Secondly, your lens is not a good choice for either a Moon shot or for the Milky Way. So, read your manual or get hands-on advice from a photographer. Perhaps a course from a local school.