Vixia HF R800 dual mic setup - will a passive mixer be able to pipe in a feed? 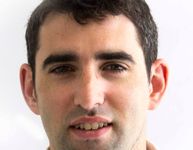 I came across this thread about piping in two external mics to the Canon Vixia HF R800 on these forums here.

The question was: how can you record two (or more) external mics into the HF R800 when it only has one external mic input?

The advice from one contributor was to simply use a camcorder mixer which seems logical to me. Obviously everything will mix down into one channel. But it should get the mics in.

Where I'm getting confused, however, is trying to think about things from a power perspective. Because the Vixia HF R800 neither supplies phantom power nor plug in power from its external mic jack and hence everything needs to be supplied to every microphone that's going to get a feed into the camcorder (at some point).

Let's say I pick up a passive mixer. Actually, I already have one on the way.

It doesn't have any electronics and hence can't send power up to the microphones plugged into it. It's just a piece of plastic with some level switchers (example: Saramonic AX100. Point of comparison: Smart Rig II which has a built in battery and hence sends power up to the mics from the mixer itself).

In this case, I'm going to need to use microphones with their own batteries and plug them into the mixer. So let's say I find tow wired lavs with a battery capsules plug them into the passive mixer and then run the line out from that into the camcoder.

Should that all work?

Or does the power supply to the mics need to come from earlier in the line in order to deliver it to the Vixia?

(Sorry for the somewhat complex question. I'm realizing that I will want to be doing some two person interviews and unfortunately bought some gear intended for only one mic).

That is a tough one. As you indicated, the primary concern here is going to be power output from the mics through the passive mixer which is ultimately going to depend on the specific mics and what kind of power degradation is introduced due to the mixer. Conceptually it all makes sense though, so as long as everything is connected properly you will have your answer in no time. If it does work, I still imagine audio balancing may be an issue, or it may be that one of the mics just can't put through enough power to be near the same level as the others, etc.

Based on what you describe it sounds like you are trying to keep everything as condensed and streamlined as possible, but in cases like this you may have a much easier time recording a scratch track with a single mic on the camcorder itself and then record the true audio to a separate multitrack recorder with more power capabilities. This would also make it much easier to balance each mic to the others.

I'll let you know how it goes.

Specifcally, I'm trying to figure out the best way to record a two person interview (me and subject).

Obviously a two transmitter lav setup would work fine and no power issues with the receiver getting into the Vixia ... but I think (I've only ever used a single Tx/Rx unit) that would already mix me down to one channel. So no ways to cut out unwanted sound from one of those mics in post.

I happen to have 2 x 1 Tx/Rx systems at this point (one cheap one, one upgrade). So I could either mix in two systems and manually change levels on the fly (likely horrible). Or (probably smarter to do this) use one wireless system and one boom or wired setup. So no potential for frequency interference.

Kinda complicated stuff but I reckon with a bit of creativity some solution can hopefully be found!