I've been trying to find a good site that explains what to look for in a flash unit and how to match one to both the camera and my typical subjects.  The only flash I ever bought was a Vivitar for my AE-1 Program so I'm somewhat behind the learning curve here...

Can anyone recommend a site that's easy to understand?  Bonus points if Speedlites are discussed.  Thanks!

Flash technology has changed CONSIDERABLY since you would have purchased a flash for your AE-1 Program.

Flash, in those days, was based on the Thyristor sensor... a kind of "electric eye" on the flash that measured the light being returned from your subject and cutting off the light once it believed enough light was returned for an adequate exposure.  There were numerous problems with this idea of an automatic flash. Serious professionals did everything with manual flash - which they could control with more certainty.

Then came A-TTL... a better system, but it still had it's flaws (I'll skip mentioning them.)

That was followed by E-TTL and ultimately E-TTL II.

E-TTL II is the current system.  When you take a shot, this system does the following:

1)  It meters the ambient light in the room to determine what exposure would be necessary if there were no flash at all.  It meters the scene using the "evaluative" metering (the scene is divided into a checkboard and it meters the light in each "square" independent of the others.)

2)  It fires a "pre-flash" (at this point the shutter is still closed) and this is usually done at just 1/32nd power (usually inadequate but that's not the point).  WHILE the pre-flash fires, it re-meters the scene (again in "evaluative" mode using all those squares).

3)  It compares the difference of each corresponding "square" of the evaluative metering sytem from #1 (no flash) vs #2 (with flash).  It is trying to determine how much of a difference the flash made (at that 1/32nd power level).  If there was a light bulb in the scene then it probably made no measurable difference.  If there was a mirror in the scene (or any highly reflective object) it probably made a HUGE difference.  What it's really after is the squares in which it made a moderate difference (no light bulbs or other light-emitting sources and also no mirrors).   This gives the camera a very good idea of how much actual power should be used when the shutter is actually open.

4)  If (and ONLY if) the flash is (a) mounted on the camera and (b) pointed straight ahead (not swiveled up for a bounce shot nor to the side, nor off-camera, etc.) AND if you have a compatible lens, THEN it uses the focused distance (reported by the lens) to determine how far your subject is located AND it also knows the "guide number" of the flash.  It can use this to very accurately determine how much power should be needed for the shot.  This step is ONLY performed if all of those conditions are true.

5)  Having done steps 3 & possibly 4, the camera now knows how much flash power is required.  You have the ability to dial in "flash exposure compensation" (aka "FEC") in which case the camera will increase or decrease the flash power by some number of stops based on your FEC setting.

6)  The camera opens the shutter an the flash fires at that calculated power level.

The amazing bit... everything from step 1 to step 6 happens so fast you'd SWEAR the flash only fired once.

Canon makes it fairly easy to determine how much power you get out of any given flash... based on the model number.  I'll explain...

Canon's current Speedlite lineup consists of the following models -- ignore the letters and pay attention to the NUMBERS you see in the model number:

(I skipped the macro ring-light speedlites).

The "guide number" is the distance at which the flash can adequately illuminate your subject ASSUMING exposure settings of ISO 100 and f/1.0 (shutter speed must be at or below the flash sync-speed for your camera model which will be anywhere from 1/160th to 1/250th depending on which camera you own.)

Setting the ISO to 100 is no problem.

All you have to do is divide the guide number by the aperture value (f--stop) that you are actually going to use... and THAT is the distance at which the flash can adequate illuminate your subject.

Very important:  This assumes the flash is pointed STRAIGHT at your subject (not bounced) and that you are not using any light modifiers (no diffusers, shoot-through umbrella, soft-box, etc. etc.)  Because every light modifier will "eat" some of your light.  A bounce off the ceiling will both increase the length of the path from the flash to the subject, plus the ceiling paint will "scatter" light (it's not a mirror so you wont get the majority of the light returning from the bounce).

Some of Canon's speedlites can work as off-camera flashes but do require some type of "trigger".  Depending on camera model, your on-camera flash may be able to function as an off-camera trigger.  The flashes with the "RT" suffix use radio (does not require line of sight) but all other models do.  Some models can work only as a "slave" (off camera) flash.  Some models can server as a "master" (on camera trigger) and some are flexible enough to be either.

The 600EX-RT is a flash AND is a radio trigger... or the ST-E3-RT is an on-camera radio-trigger only.

Many flashes have a built-in focus-assist beam that will help your camera focus even in complete darkness (you must be in "One Shot" mode for this to work -- it does not work in "AI Servo" mode.)

Incidentally, you'll see the name of the flash called "Speedlight" or "Speedlite".  The latter is Canon's name (Speedlite).

Whew,, thanks for  such a  detailed reply.  I think I understood most of it although I got cross-eyed at all the math stuff.  The Canon shop of course has info on the various flashes but of course they are all of the extolling-the-virtues of each one.

The math seems a bit arbitrary until you realize what is actually happening.

The rule is called the "Inverse Square Law" and it works for not just light, but radio waves and lots of other things.  Here's a link ot Wikipedia:  https://en.wikipedia.org/wiki/Inverse-square_law

But the law works because of a few simple rules about the relationship between the diameter of a circle, and the area of that same circle.

The math rule which most people learned in high school (if not sooner) is that the area of a circle = Pi x Radius^2 (or a=πr^2).

It turns out if you increase the radius (or diameter - - it makes no difference) by a ratio of the square root of 2 (approximately 1.41) then you will have EXACTLY doubled the area of that circle.

This is WHY each full f-stop on your aperture happens to be the previous f-stop x 1.41 (and they round the value displayed on the camera rather).

It turns out this SAME rule works with distances.

This is because if I have a light that is spreading out at a 30º angle as it emits from it's source and It's shining on a spot on a wall 10' away, I can calculate the size of that "circle" being illuminated by the light.  But if I move the light so that it is now 14.1' away the size of that circle has increased by a factor of 1.41 and the AREA of that circle has exactly doubled.  If you imagine that the light is bright enough that some number of "photons" or "light rays" is striking that wall, then backing away from that wall (and increasing the area illuminated by that wall) just got bigger such that the same fixed quantity of photons (or "light rays") now has to cover exactly twice as much as before... meaning there are half as much light landing in any given fixed unit of space.

This is probably the most complicated math in all of photography... if you can learn the inverse square rule and how it effects light and distance from light, it makes working with light much easier because everything "just makes sense."

Thanks, Tim.  Okay, your last  response did me in.   I could feel the same deer-in-the-headlights panic wellling up inside that I used to experience in HS math class (okay, junior high too).

It seems that, if I were doing macro photography (a new challenge for me), a flash would not have to have blazing power as the subject is quite close.  However, a blog I follow features a lot of macro shots using the 630EX. The shots are well-exposed and not blown out.  There's a question here but not sure how to word it.   I probably would use the flash occasionally for other purposes (say, landscapes at dusk).

Most "math" in photography is relavely simple.  The "inverse-square law" is probably the most complicated math someone is likely to encounter because it deals with light fall-off and comes into play whenever you use a flash.

Another way to think about it is to consider a garden hose with a spray-nozzle on the end of the hose (set to spray water in a wide spray).  If your face is right in front of that nozzle, you're getting hit with everything.  If you stand back 10', the same volume of water is coming out of the hose, but since it's spraying wide, most of the water misses you.  The closer you are to the end of the hose, the wetter you'll get.

You don't even necessarily need to know the formulas as long as you remember the "concept" that the light is spreading out as it leaves the flash and that means the farther away the subject ... the more spread out the light will be by the time it reaches them.  So if you shoot an image with a close subject and a far subject, the close subject will receive considerably more light than the far subject.  Knowing this may help you rethink subject positions when you have to use a flash.

You do get to control the power output of the flash (or let the flash do it automatically) so even very close subjects don't need to be over-exposed by flash.

Aha, gardening analogies I understand (although I don't customarily spray myself in the face).  Thanks again, and it's probably time to start shopping! 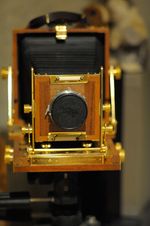 This is the best decription I have ever seen someone put in writing of how the Canon Flash Line works.  Kudos to you for sharing your wealth of knowledge.

I for one will certainly read it over several times  to make sure it sinks in.

I really think that Canon themselves would benefit by putting what you have written here on their website, and also in the front of every Speedlite flash manual they sell.  It would really help someone who buys their product to have a better understanding of how everything works.

From what you have written, it sounds like you have put a lot time and effort into process and you should be commended for it.

I will certainly give you credit for authoring it!