Many a Good Tune Played on an Old Fiddle

These shots were taken on a venerable Canon EOS 60D, using the EF-S 17-55 f2.5, all shots available light, hand-held or pushed against a window.

I belong to a local camera group that meets just after work on Wednesdays, heading out after the usual beverages and nibbles to take images on a weekly theme around the environs of Auckland City's downtown. Alas, the normal convenor was sick so I ended up taking up the reins.

Now, at this time of the year, going out at 5:30pm and sunset are pretty close together, so we needed to be close and hopefully find well-lit items to shoot. Obviously I suggested people take a tripod, but in fact I did not do so myself - partly because I got in ahead before it got dark and did a lot of shooting when there was light!

It turned out that only a handful of people turned up so, after distributing multiple copies of a booklet detailing the locations of public artworks, we all trooped along to the waterfront to shoot a particularly suitable piece of art: "The Lighthouse".

Now this is not, in fact, a lighthouse in the conventional sense. It is a custom-built artwork that externally resembles a classic state house, as built by successive governments in NZ to house low-income families from the 1930’s. I took these shots of the installation in the middle of the day when I went to do a recon of the site. 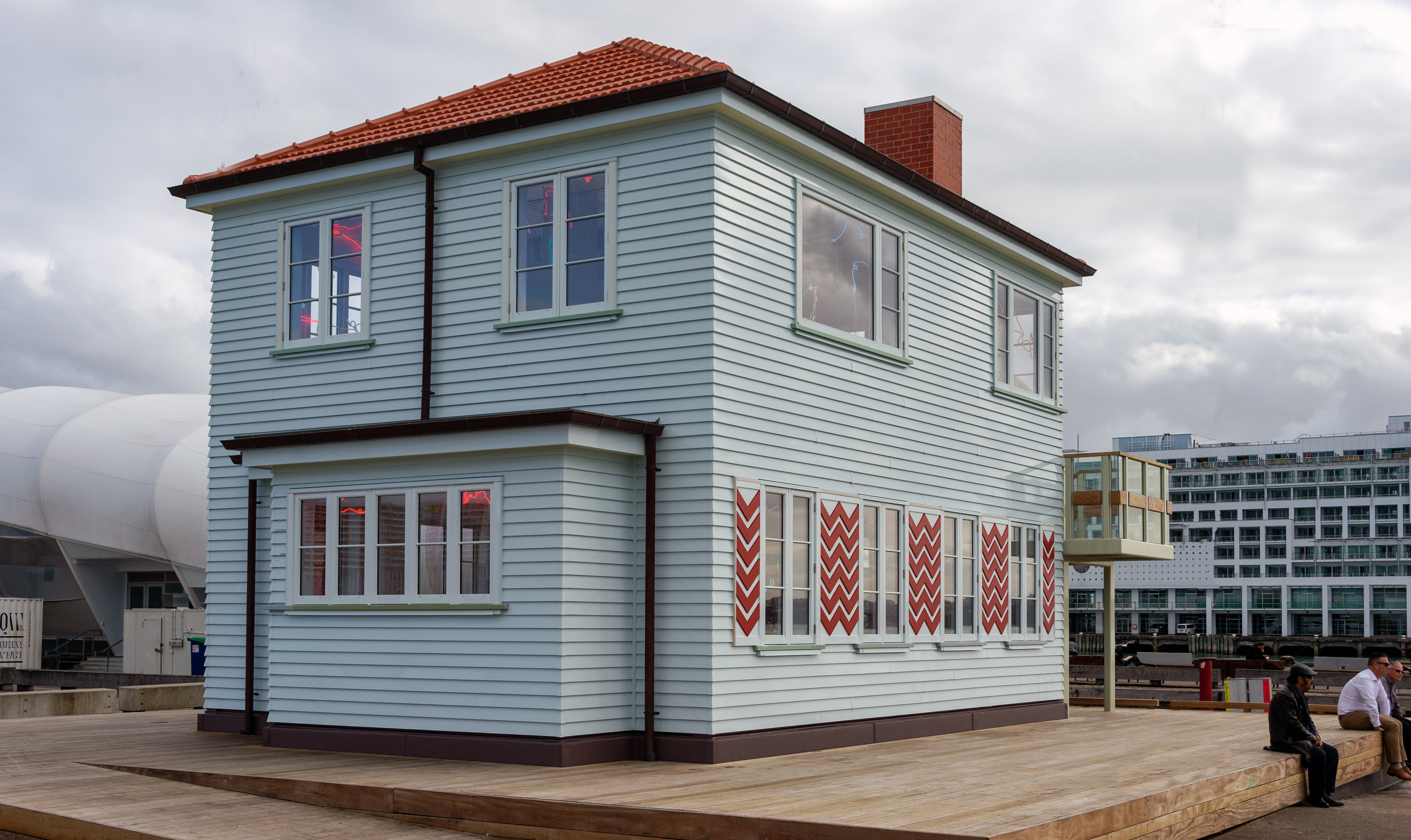 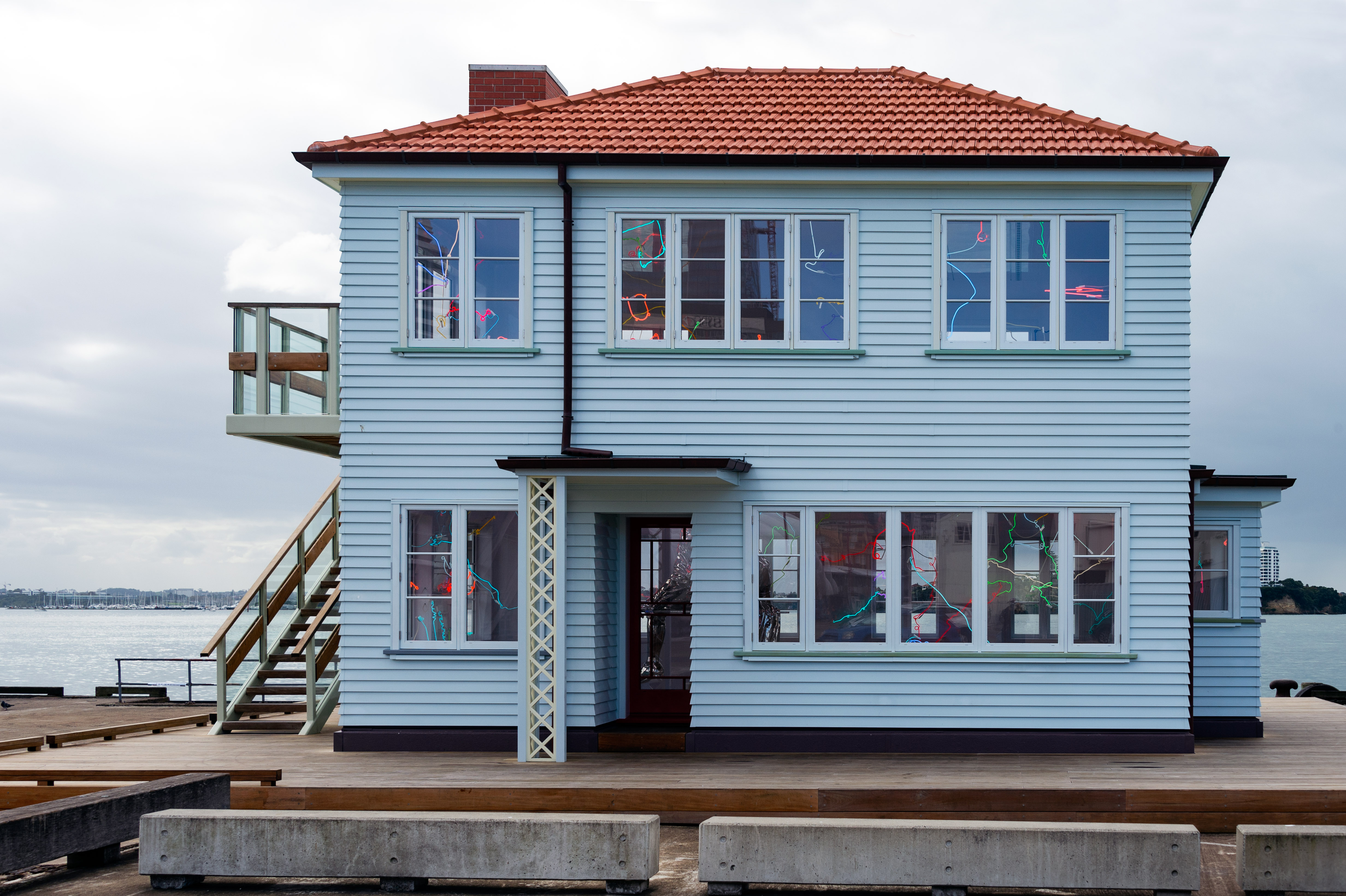 Inside it is just a shell that provides a unique environment for just two pieces of art:

1. A stainless-steel statue of Captain James Cook, the renowned English explorer and navigator, who went on three trans-global voyages in the 18th century, and who mapped and claimed for the British Crown NZ (and many other Pacific lands), precipitating the colonization of the country. As we are now at the 250th anniversary of his first visit, his role as an explorer and the implication of his engagement with NZ and in particular the indigenous Maori population has become a matter of some debate. Some Maori claim that he initiated a European invasion that resulted in loss of land and culture of the Maori population. This statue shows Cook, seated on a simple bench staring into a symbolic fire, apparently considering the implication of what has become of the country he found and claimed. 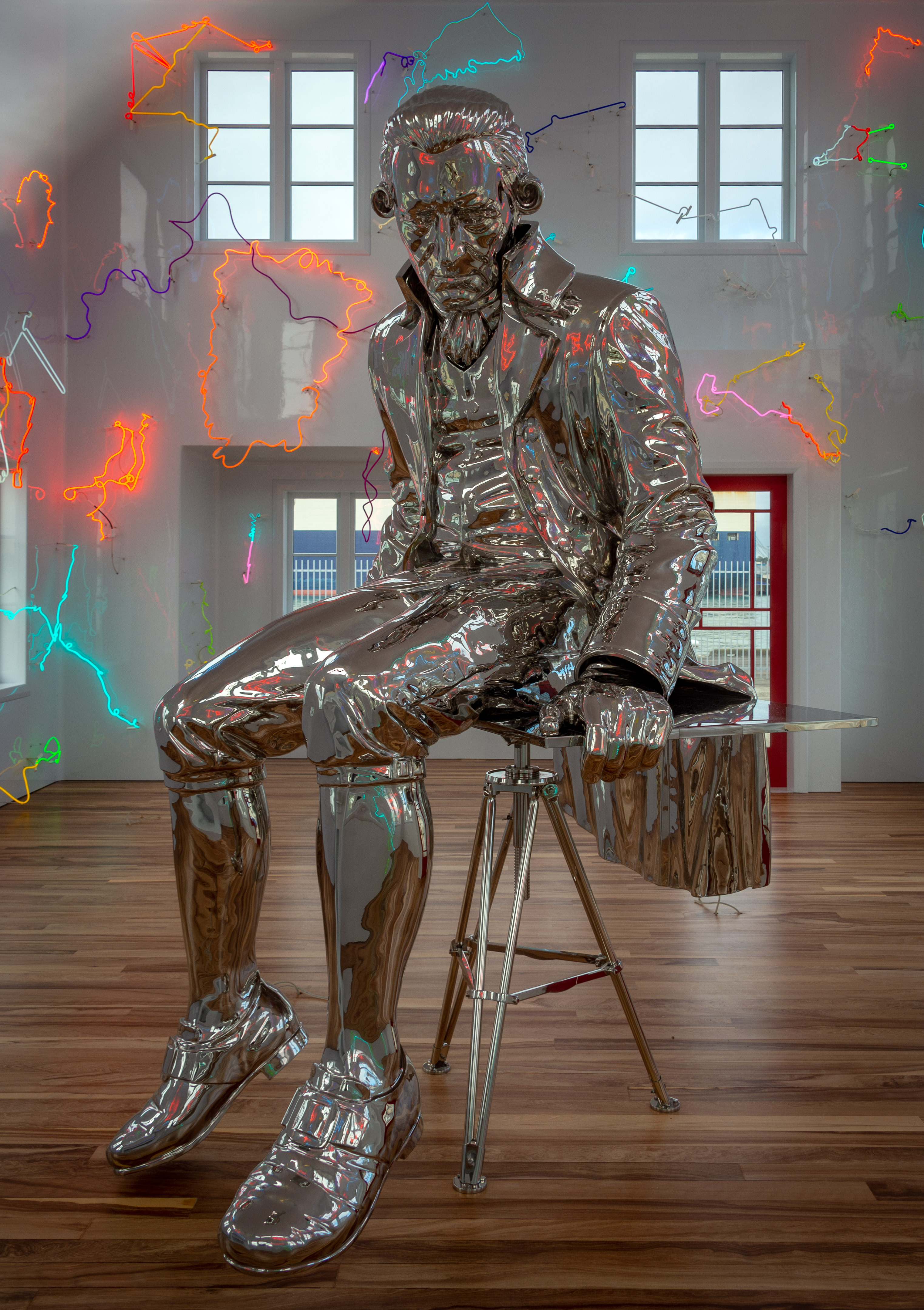 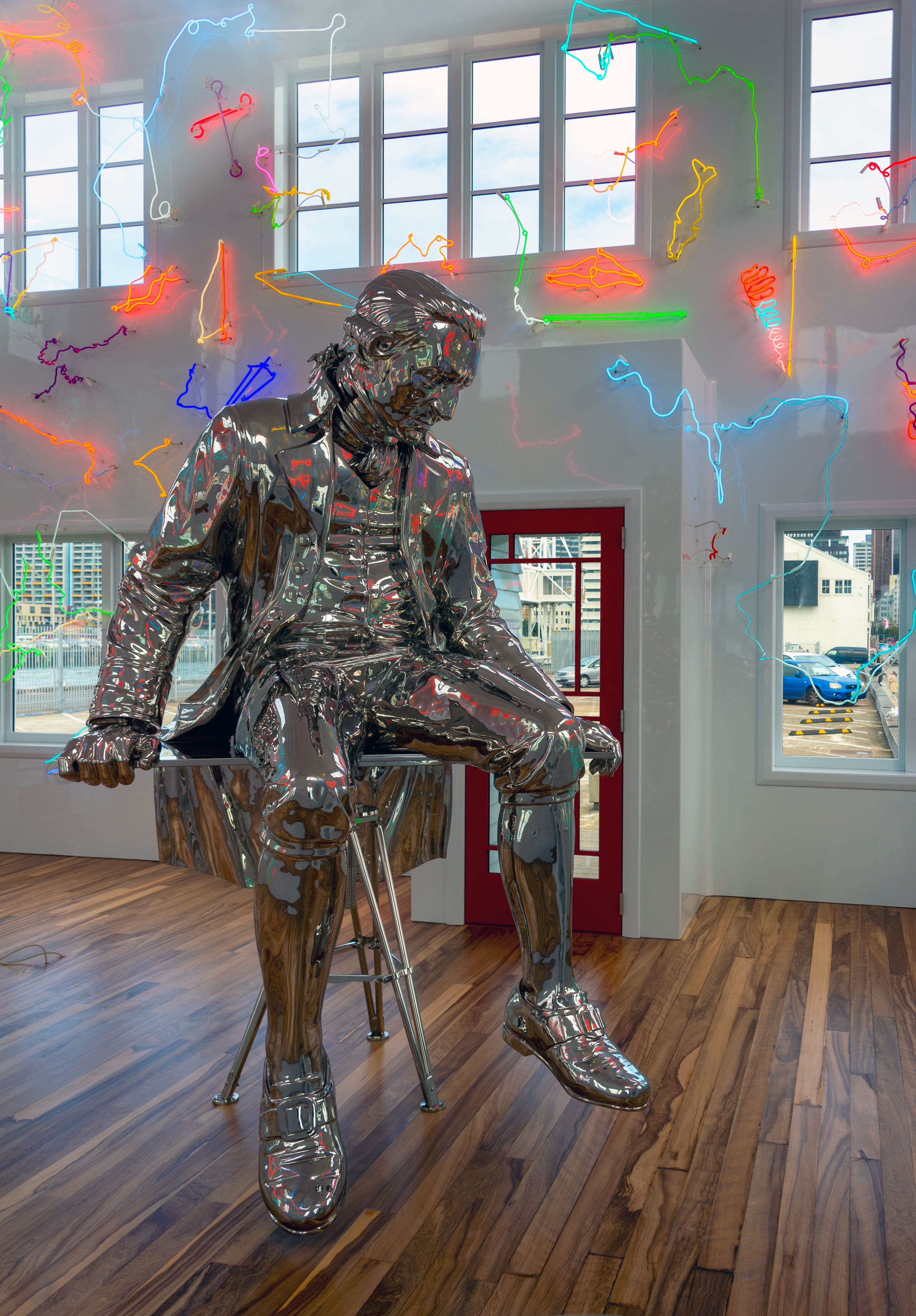 2. Surrounding him in an otherwise empty space is an array of lights: fluorescent, incandescent, LED and neon. They interpret the Pleiades Constellation, the position of which determines the start of the Maori New Year period of Matariki.

When I went back at night with the group the results were dramatically different. I used the floor coverings as a reference to find some middle ground for the temperature settings. 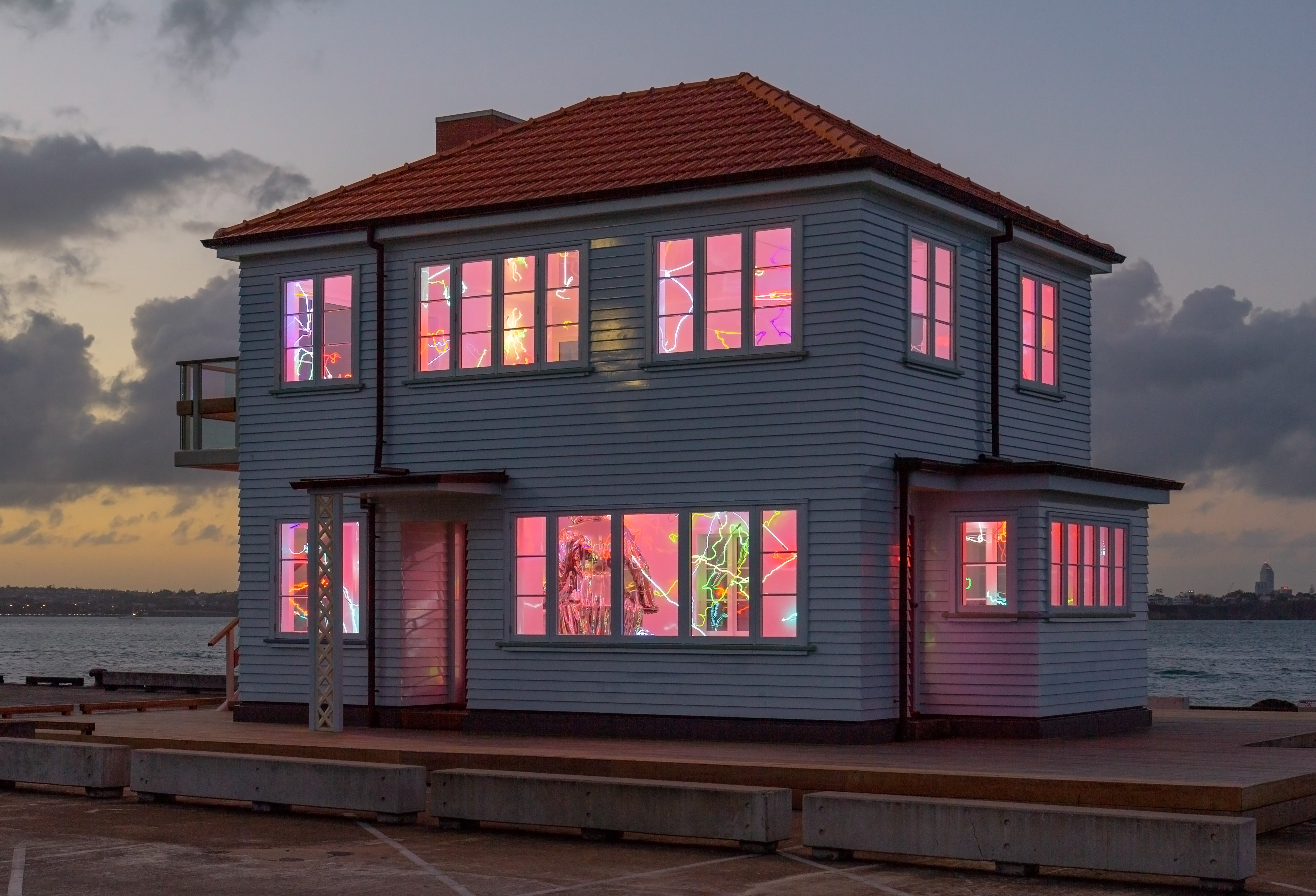 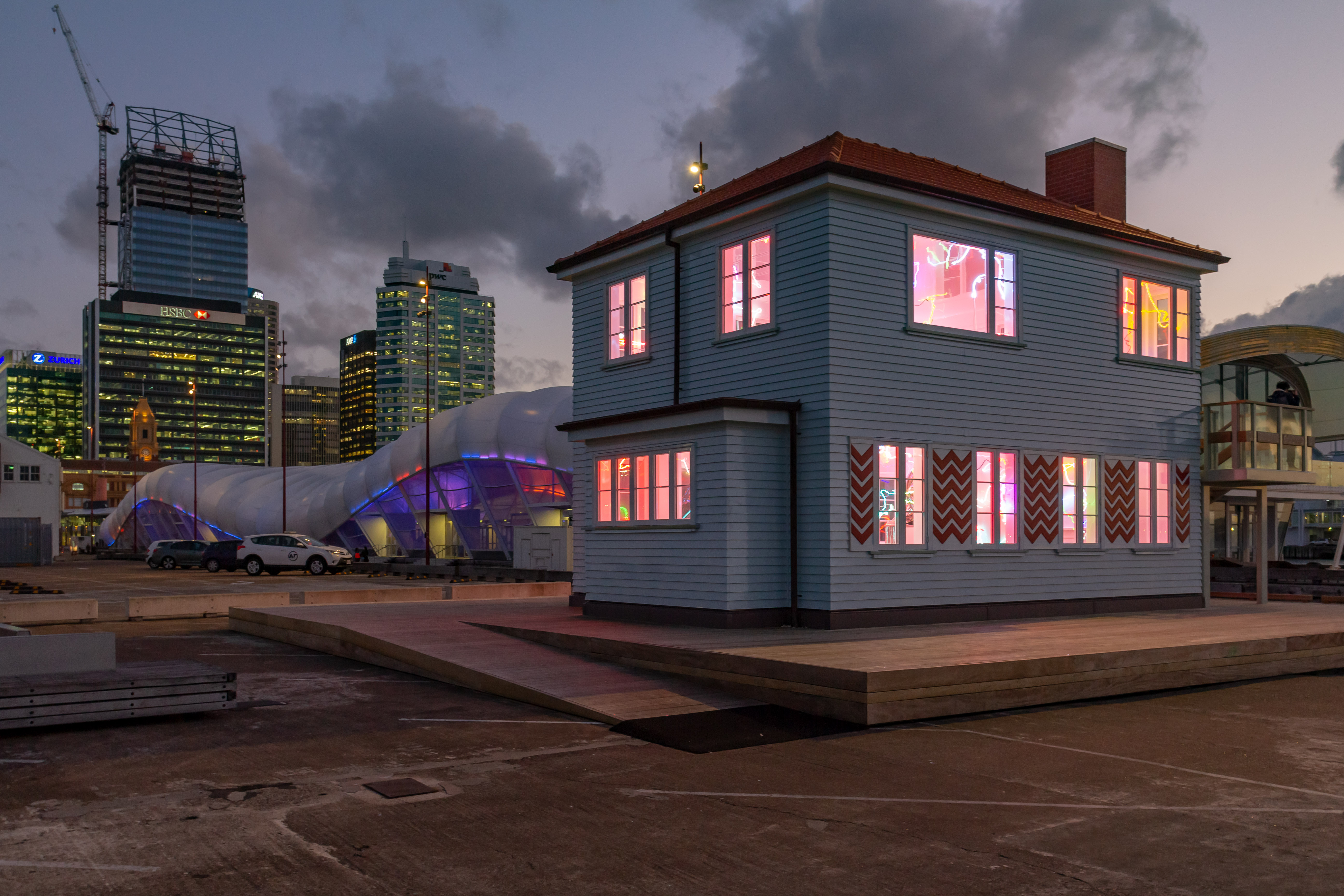 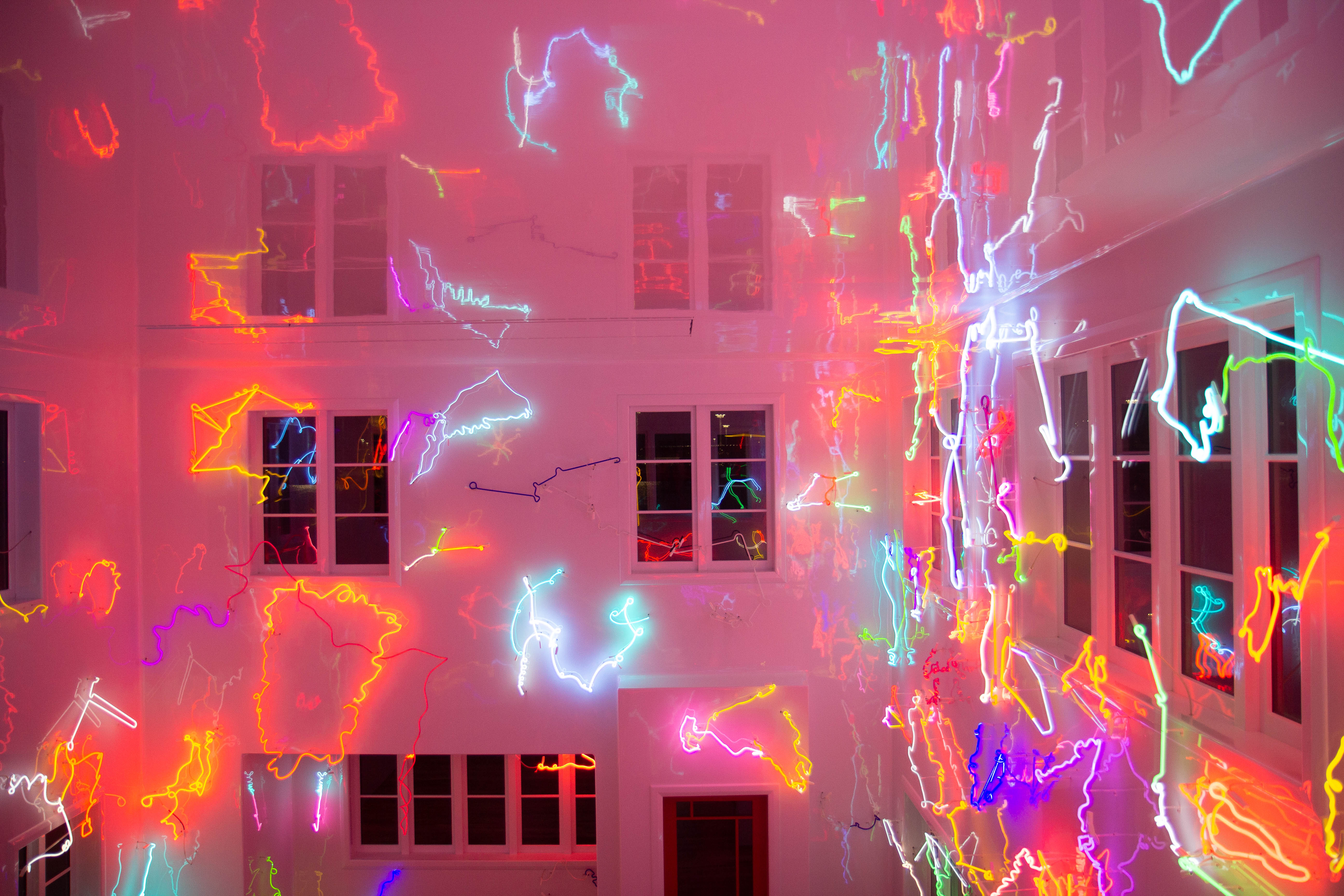 The result of these two elements is an almost psychedelic display of lights and reflections, especially from the figure of Cook, creating a disrupted image - perhaps as his image is now challenged by contemporary commentators. 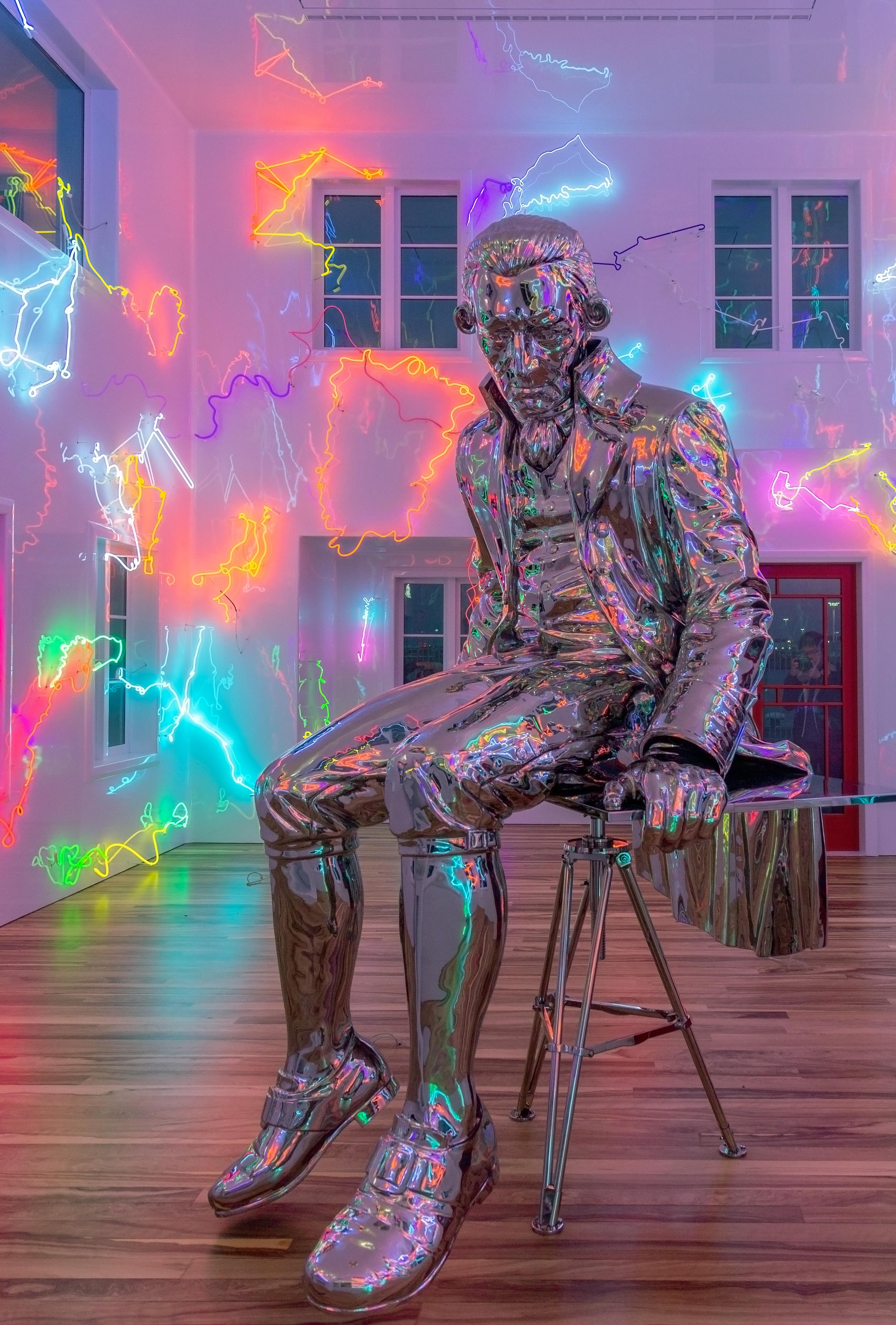 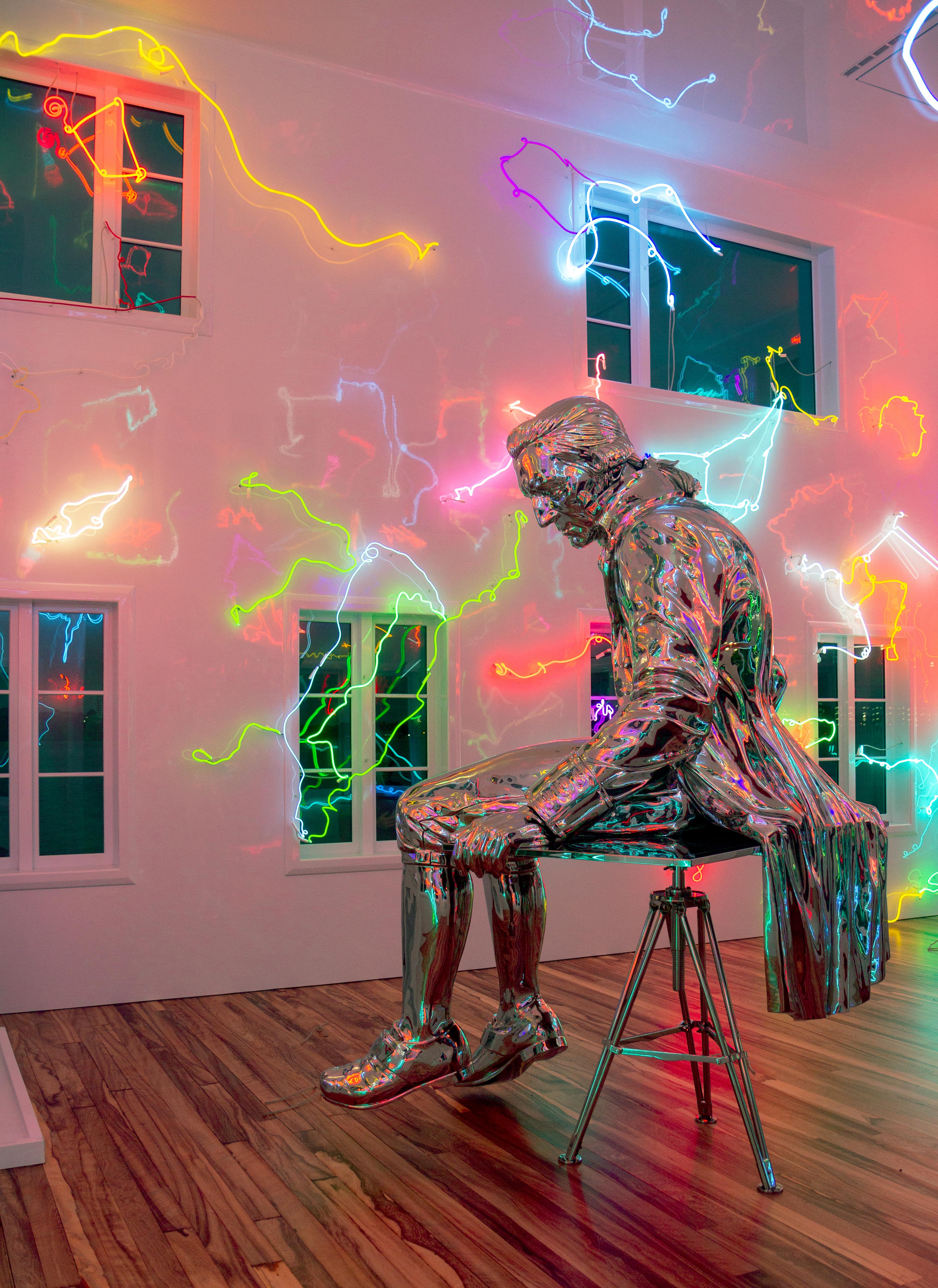 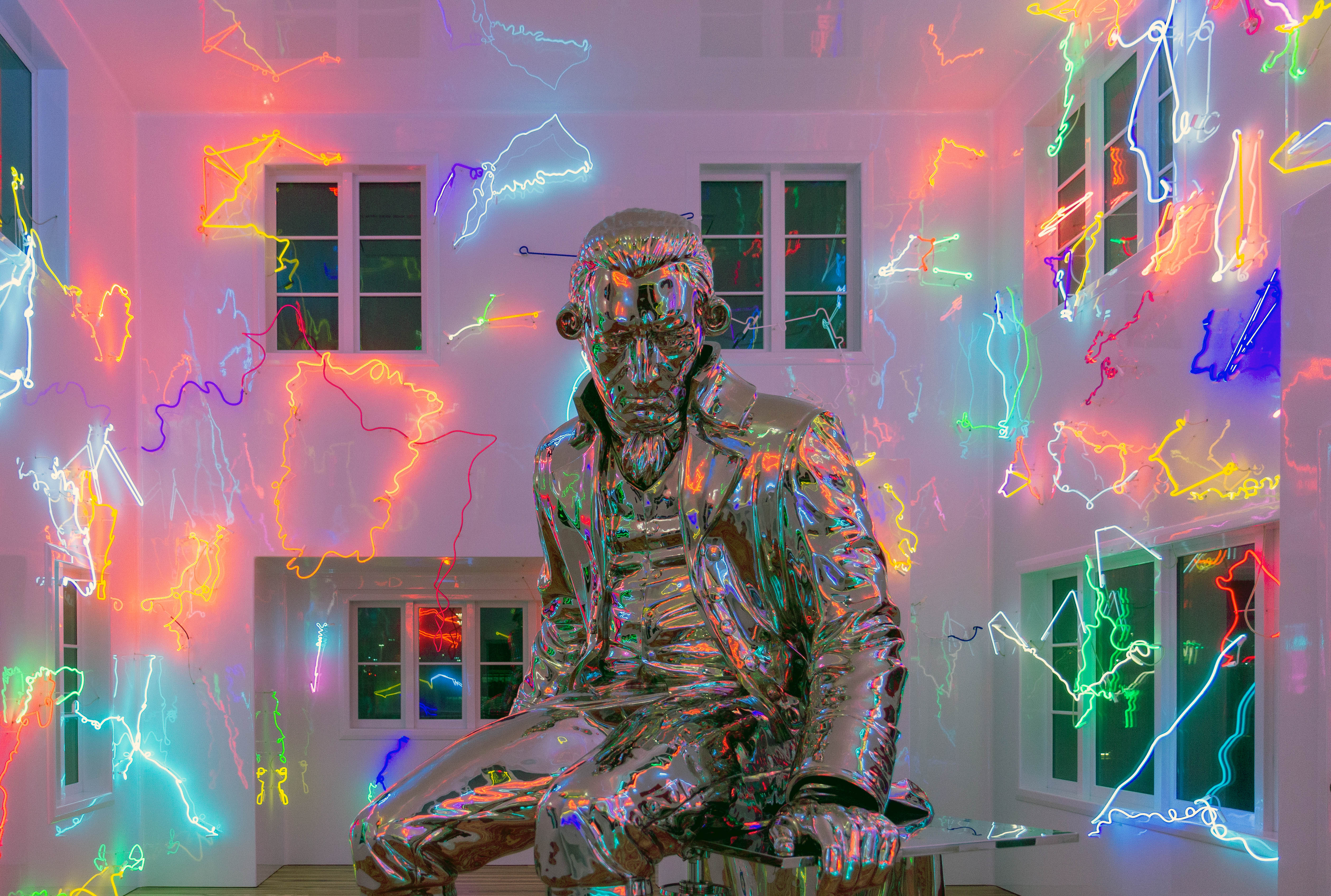 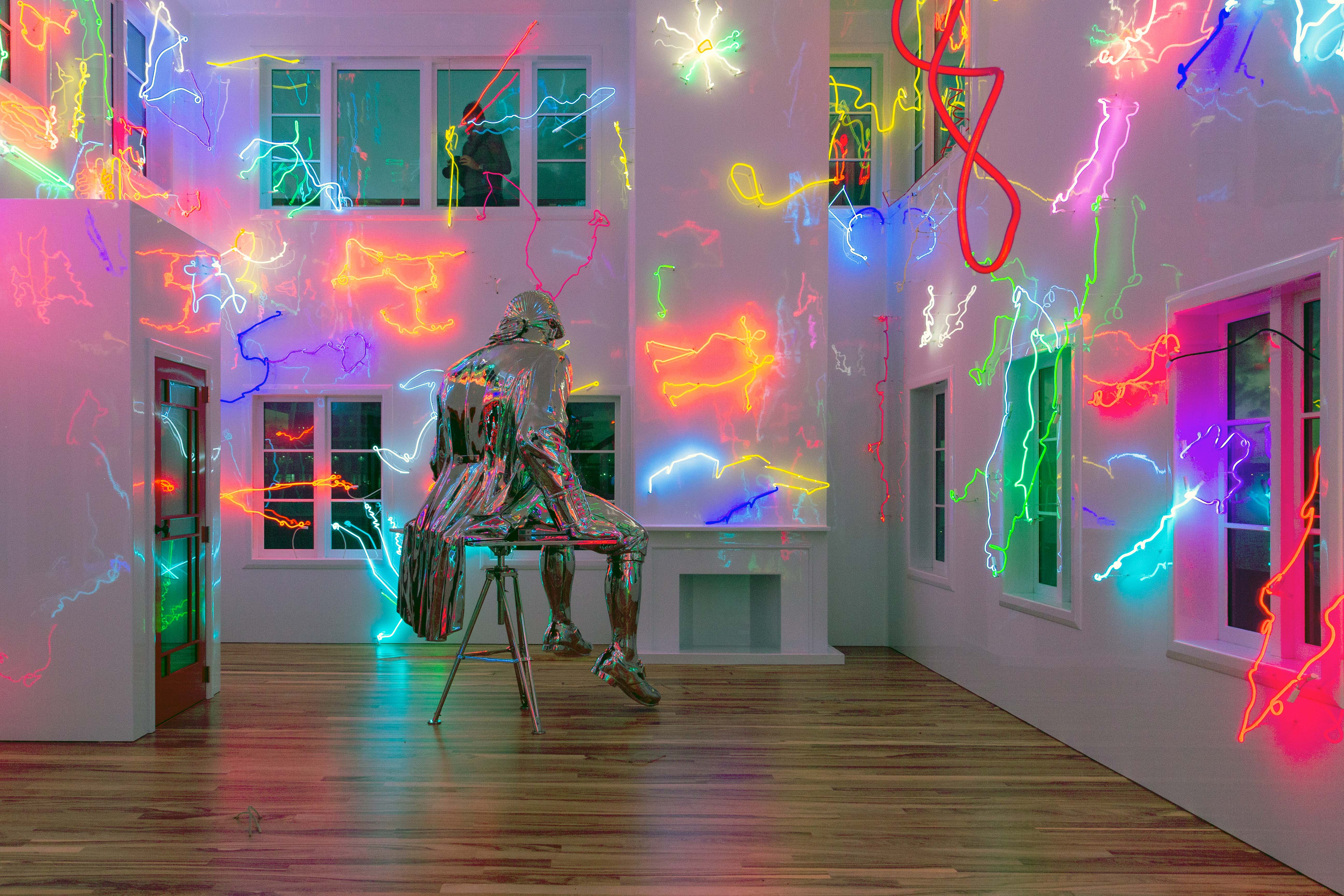 To quote the booklet “The Lighthouse was... a gesture of permanent subterfuge in the heart of the property obsessed city. Located in one of the most valuable and contested pieces of real estate in Auckland. The Lighthouse is a hotly-debated piece of artwork.

The Lighthouse honours our egalitarian past and is a beacon signalling Maori struggles for land retention. Its questions the current and ongoing housing crisis, its impact on Maori, and the way the country provides for its most vulnerable people.”

I found another Auckland Council website that explains the concept, execution and imagery in much more detail if you are interested: https://ourauckland.aucklandcouncil....el-parekowhai/

Trying to get a decent shot of all this is challenging - there are so many lighting types that you are bound to get colour castes. Furthermore, one cannot enter the building, so shooting through windows often coated in sea salt is the only option - obviously I cleaned the glass but it was not a perfect solution.

"All the beauty of life is made up of light and shadow", Leo Tolstoy;
"Skill in photography is acquired by practice and not by purchase" Percy W. Harris
"A good swordsman is more important than a good sword" Amit Kalantri
Technique will always Outlast Tech - Me
Me too
2 Likes
Share
Reply
0 REPLIES 0