I'm trying to use a Speedlite 430 EX II with my SX 50 HS, but the Assist Beam of the flash doesn't seem to work.

See page 21 of the manual and ensure that the Auto-focus Assist is enabled.  Also see the comment on page 22 that the Auto-focus assist is compatible with all "EOS" cameras.  Those are the SLR's, but I am not sure it is compatible with the "Power Shot" cameras.  I do not believe it is with my SX40HS.  At least, I have never seen it come on when using it with the SX40HS.  I will give it a try in the next day or so and post the results.

When I mount the 430EX-II on my EOS Digital Rebel (DSLR), which DOES NOT have a built-in AF Assist beam, the AF Assist light in the 430EX-II operates exactly as it is supposed to, but when I mount it on any of my Power Shot cameras (G1, S5-IS, SX40-HS), all of which have built-in AF Assist beams, the cameras use their own built-in AF Assists and not the flash's.  It would appear that EOS (DSLR) cameras that do not have built-in AF Assist beams have the AF Assist request lead wired to the hot-shoe, while Power Shot cameras that have built-in AF Assist beams have the AF Assist request lead wired directly to the built-in beam circuitry and NOT to the hot-shoe at all.  This is in keeping with TCampbell's response to your post on this matter over in the "Speed Lite" Forum.  So, is your 430EX-II operating correctly ?  Yes, it appears to be.  Whether or not this could be a problem for you depends on your camera and how you use it.  The stated max useable AF Assist range (NOT the FLASH range) of the 430EX-II is 32 feet at center and 16 feet at the periphery.  Canon does not state the AF Assist range of its Power Shot cameras, but typically for this type of camera it is about 12 to 18 feet or less.  So, in certain circumstances you could find yourself where your flash's ability to illuminate the subject far exceeds your camera's ability to focus on it, thereby offsetting some of the benefits of the high-powered flash.  Some (many ? / all ?) of the ultra-long zoom point-and-shoots seem to have problems with Auto-Focus in low light conditions when fully zoomed in on a close by object, particulalry if it is soft, fuzzy, or lacks adjacent areas of sharp contrast.  Even if they can eventually focus, it takes them forever.  I have been having fairly good success extending the AF Assist range with a SunPak LED attachment, usually used with video cameras.  I mount the 430EX-II in the SX40-HS's hot-shoe as normal, and mount the LED device in the cold-shoe of an old folding "L bracket" type of flash bracket that screws into the tripod socket in the bottom of the camera.  It greatly extends the AF Assist range by improving the Auto Focus accuracy and speed, but is not bright enough to noticeably affect the exposure or color balance of the image.  It can even be of help in composing the shot.  NOTE:  This is for extending the AF Assist range - NOT the flash range.  As a matter of fact, I have grown to like the comfortable hand grip (left hand) of that old flash bracket so much, that I just leave it attached to camera all the time, even when I am not using the LED attachment.  It provides me with a much more stable grip than just the camera itself.

The following images were taken with the PowerShot G1 and its built-in flash: 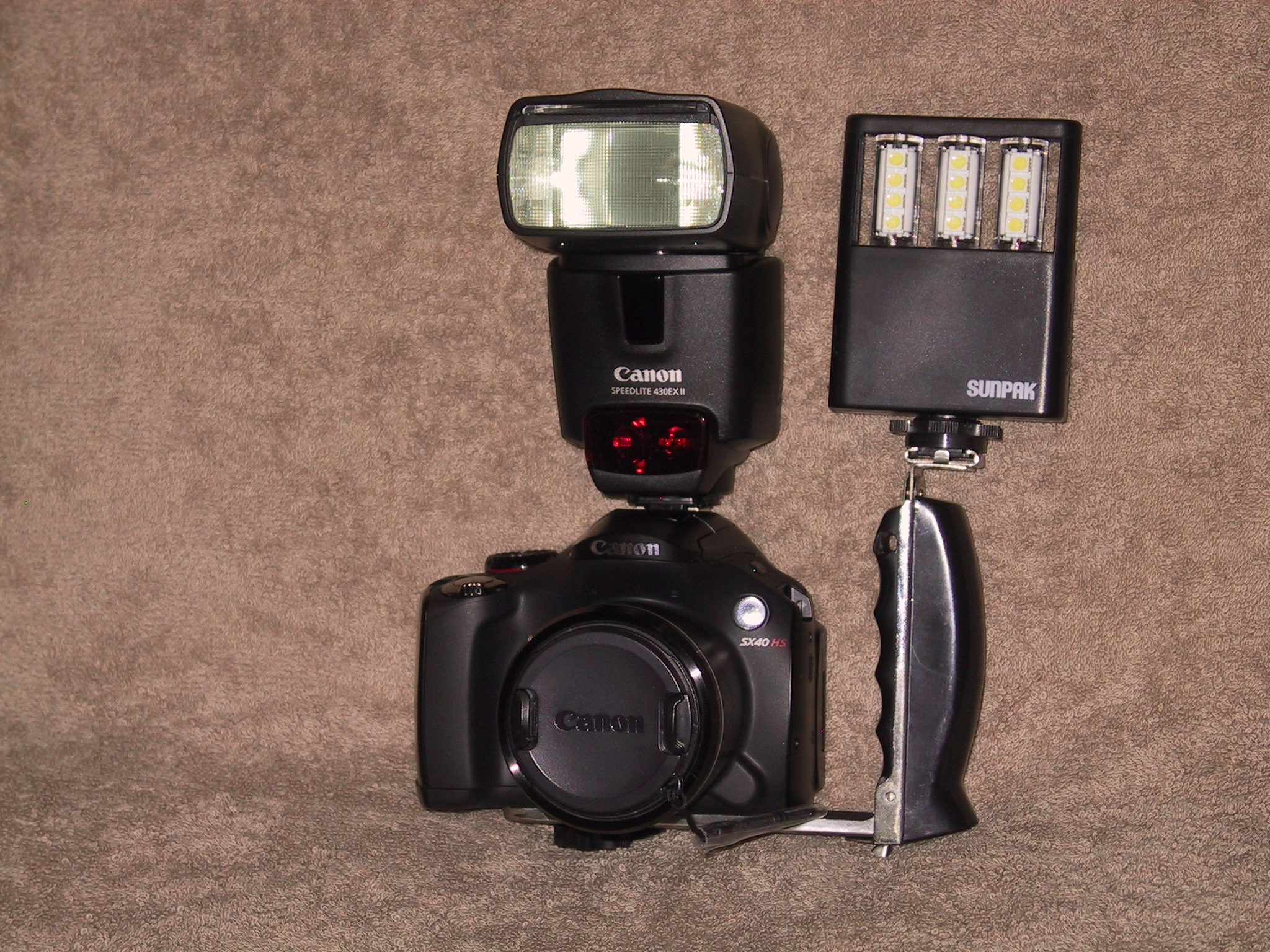 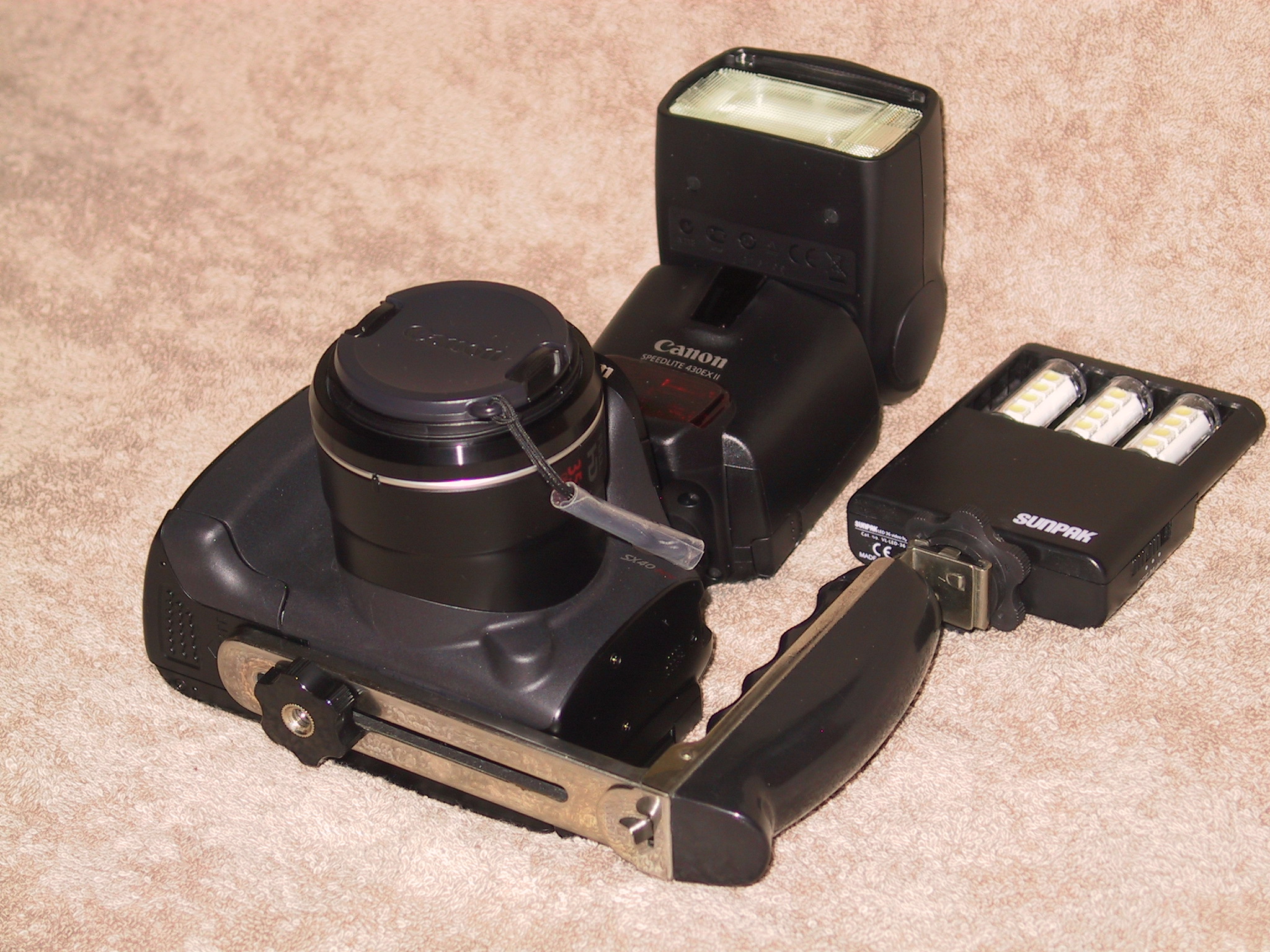