I was wondering if there is a listed tollerance for variation in AF after applying microadjustment as I'm finding that after I apply micro adjustment, there still seems to be some inconsistencies. In this example I am using my Canon 50mm f1.8. I have set my 7DMII up on a sturdy tripod and have put my Lensalign target with the ruler on another tripod. I measured out the correct distance between the camera body and the target, calibrated the height as the instructions said to do, used the middle AF point, set the camera to "mirror lockup", set the AF drive to One Shot, and using the timer function I took a three test photos to use as a base line at f1.8.  Viewing the images on my computer, I discovered that my 50mm f1.8 front focuses a little bit, but not really all that much so I apply a +3  microadjustment, and I go back to my computer to examine the results. Now it back focuses, so I decide to try a +1. I take once picture and examine it on my computer and now the adjustment is right on. That's great, but when I then take a series of test pictures with the +1 adjustment the focal plane varies, and sometimes it varies quite a bit. See these examples: 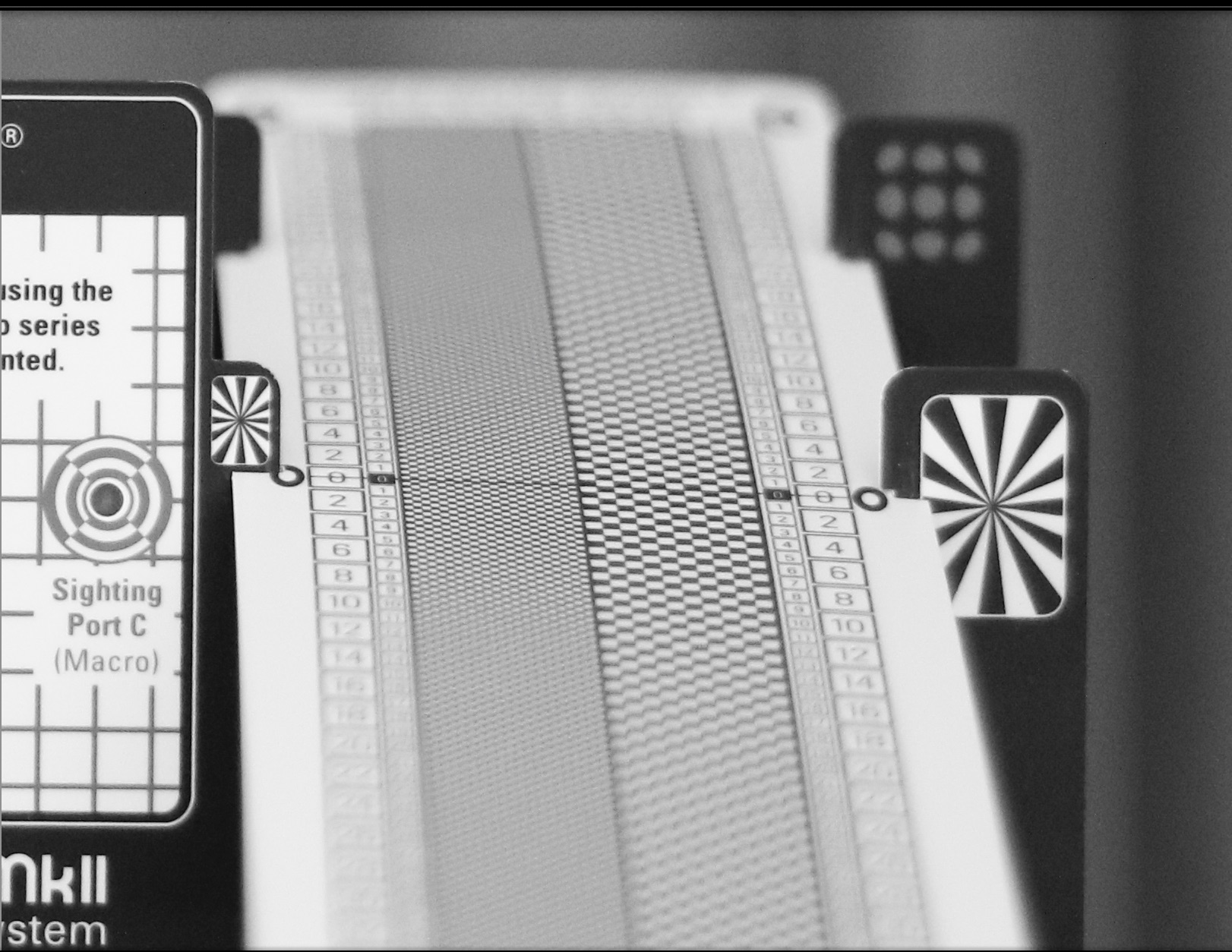 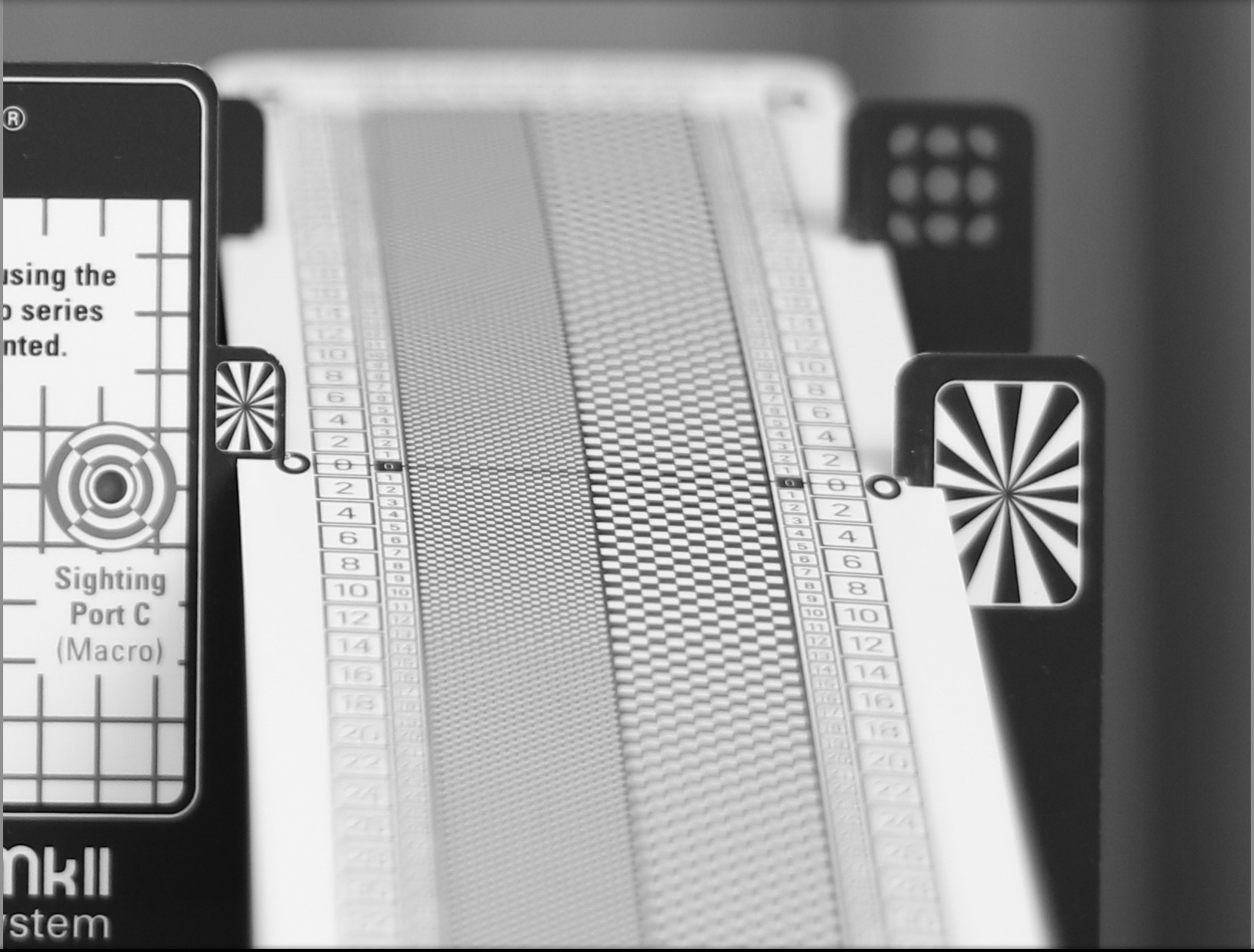 Now back focusing quite a bit: 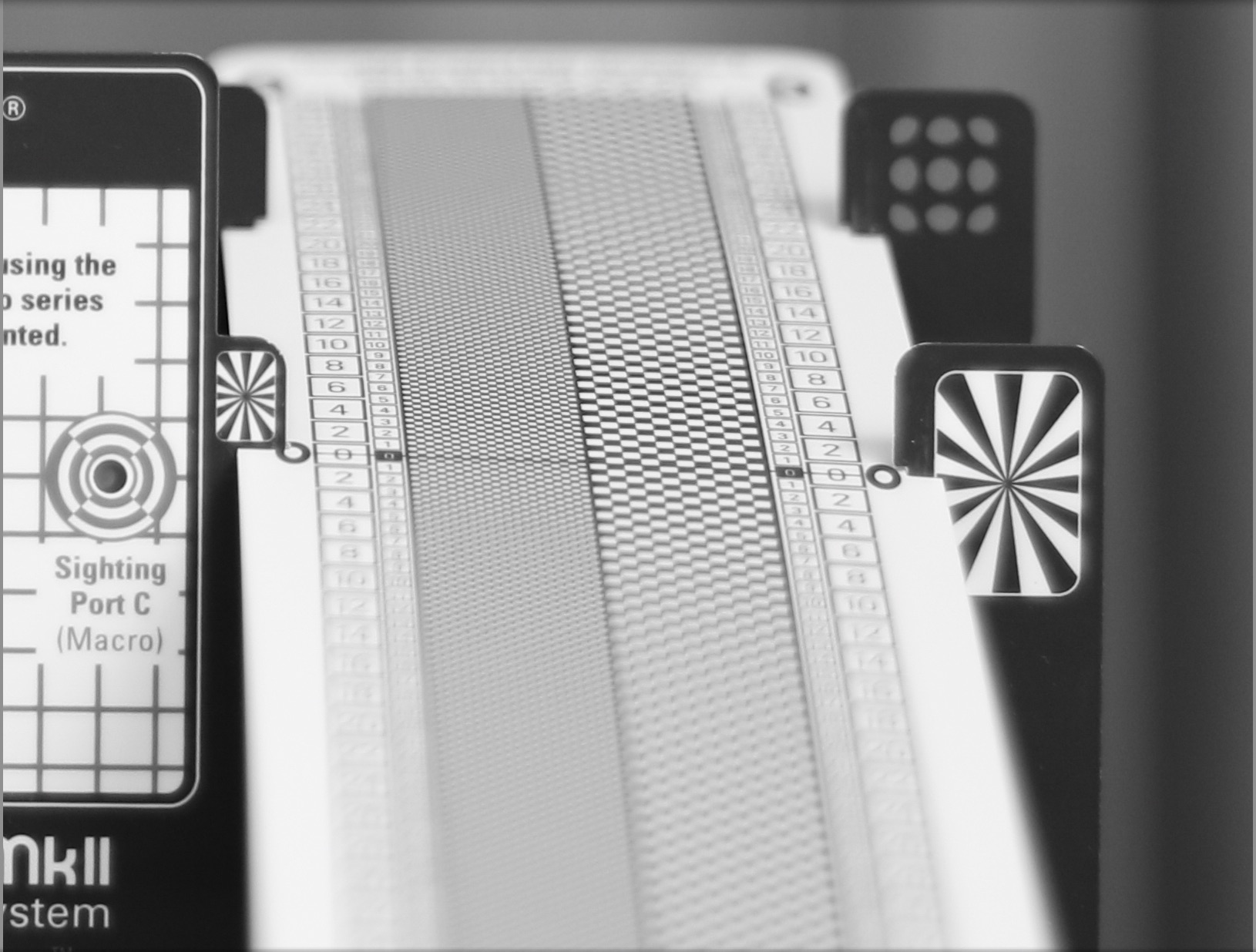 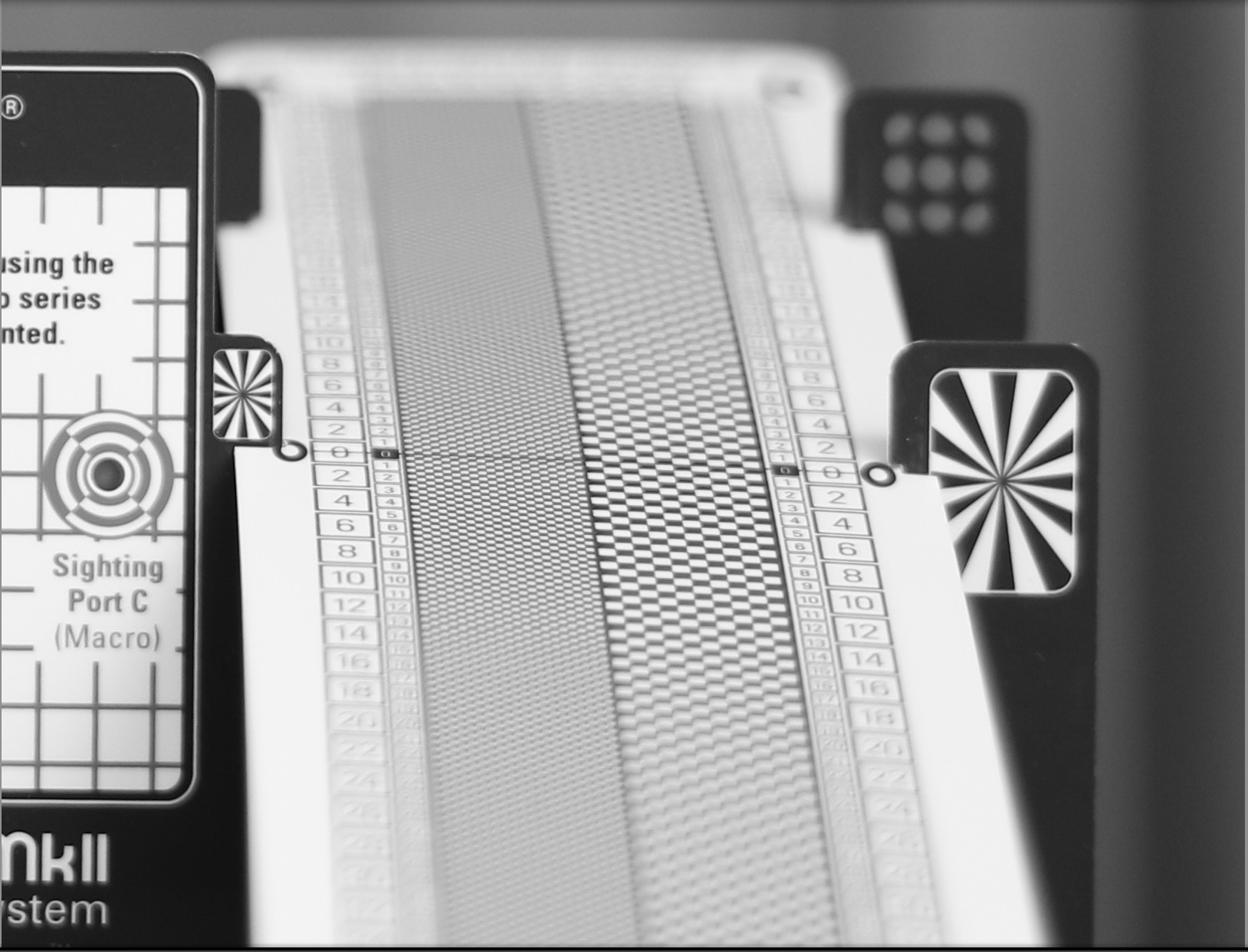 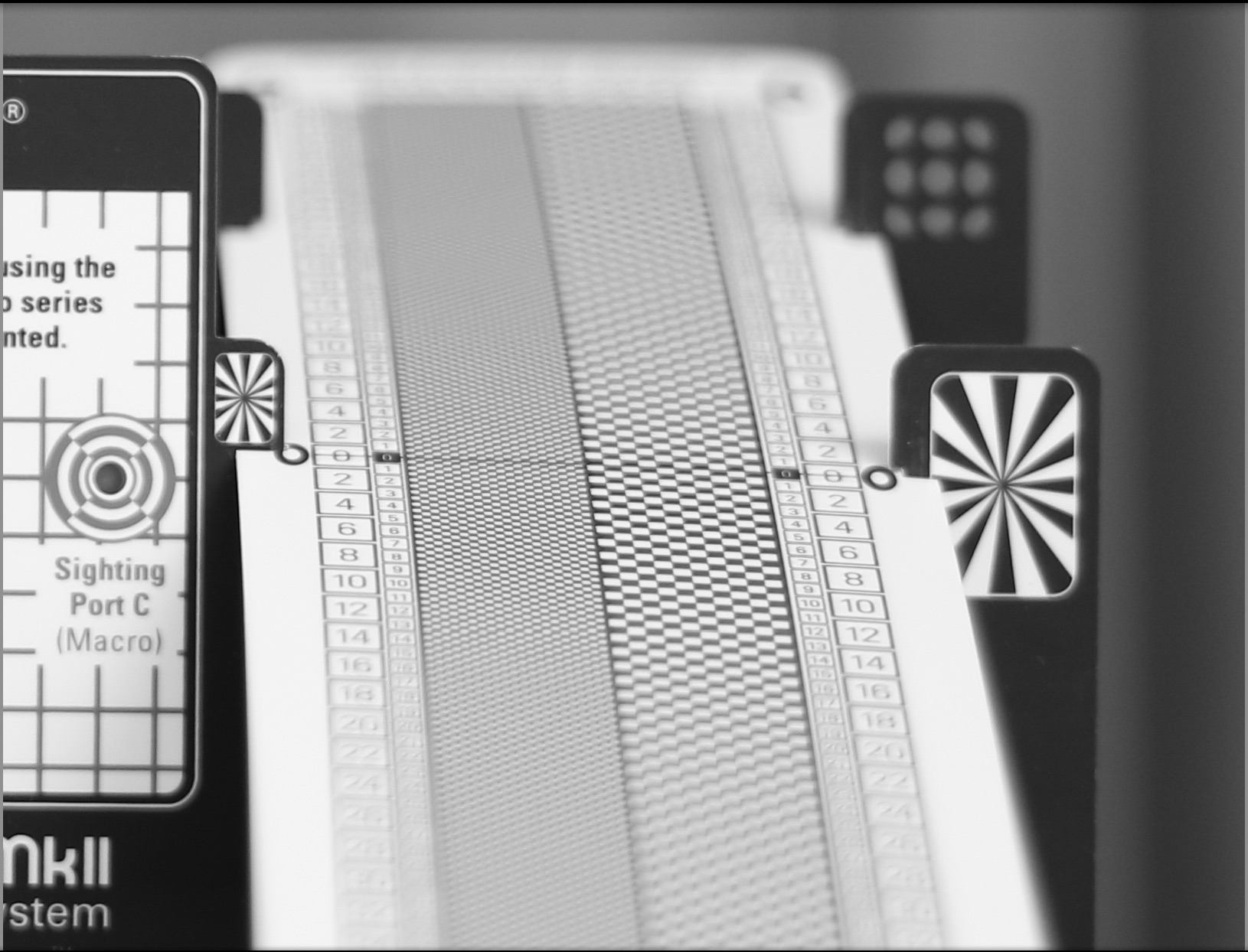 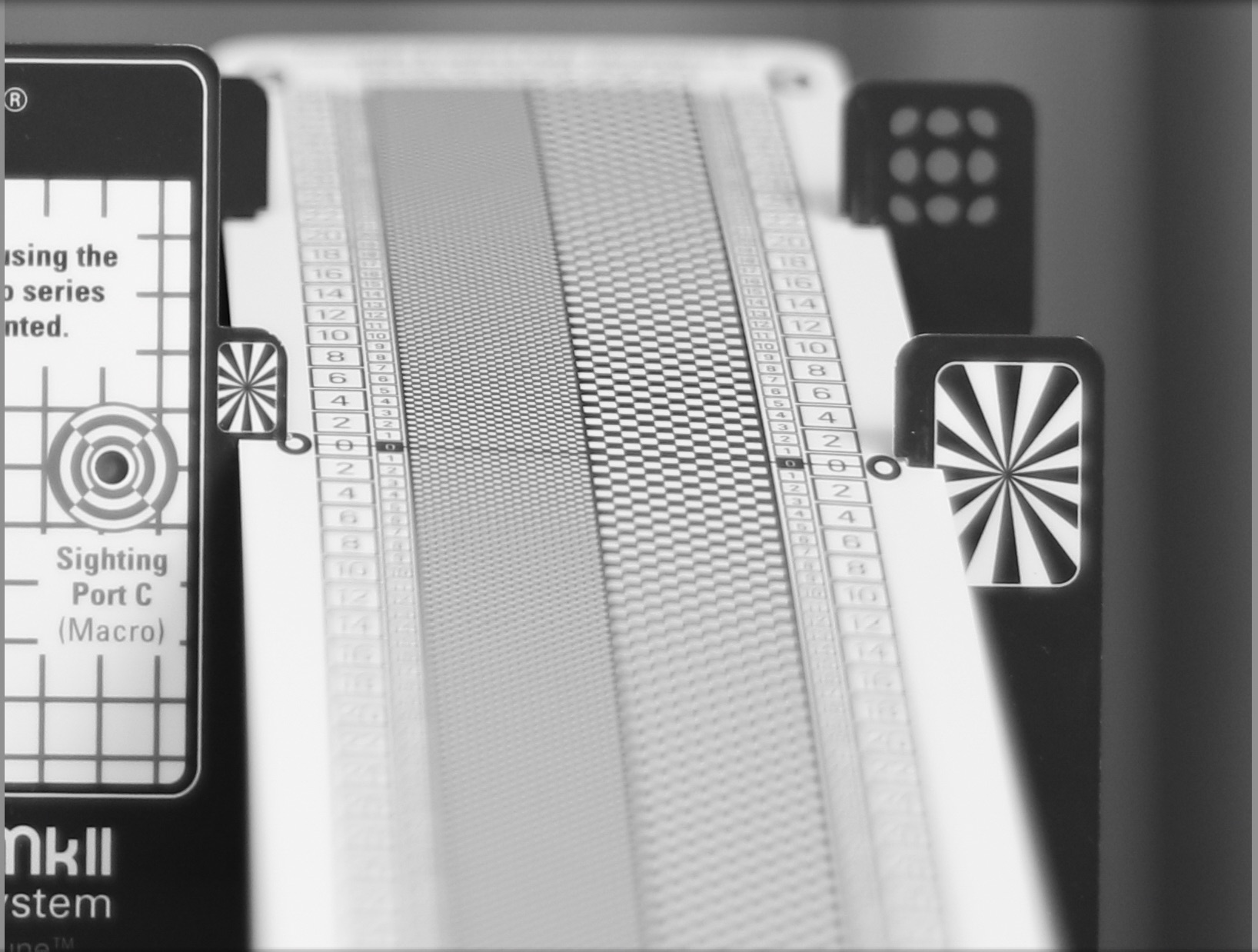 I've had the camera for about a year and in general I shoot a lot of youth and high school sports and mostly at f4.0 so up to now it hasn't made much of difference. But about a month ago a did a short portrait session for a friend, and that's where I discovered the inconsistancy. So ultimatley my question is if there is a "normal" variation in AF or do I need to send my 7DMII in for repair. Thanks for your opinions.

"What focus mode and shooting mode are you using?  When I have made AFMA adjustments, I do them several times under different lighting conditions, and take the average result."

I shot with the drive in One Shot, using single point AF using the center point, mirror lock up, and using a two second timer to make sure that I wasn't inducing any camera shake with my hands.

Or...and this could certainly be a possibility...am I over thinking this?

First off +1 MFA would not make a noticeably change in the focus.

Of your 6 photos there was only one were the plane of focus wasn't within the depth of field for the lens.

I don't think there is anything wrong with your camera.

I PM'd you a link to an article done by lensrentals.com. They are a great resource, they have many copies of lenses and cameras to work with and Roger Cicala has a good understanding of how the gear works. The link I sent is just one of many articles Roger has done on AF. They are all worth reading.

If you are going to get super picky in the pixel peeping you should probably consider using a more exact calibration method than dot tune, which according to everything I've ever read, is ok for what it is intended to be, which is quick and easy.

Thanks again for the input. Between the comments here and the comments I got in one of the other forums for Canon, I went back and did another MFA with my two "L" series lenses (24-70 f2.8 II and 70-200 f2.8 USM II). I got more consistent results this time. I made a couple of changes to the process that I think helped.

Firstly I pretty much followed everything I did to set up as I originally described in the original post including measuring the correct distance for the focal length, however (Change #1) I put the LensAlign target about four feet in front of a non-white wall as is suggested in the LensAlign directions. I'm not sure if this really makes any difference, but I can sort of see how it might so I did it. Since three of the four walls of the room were white as so was the ceiling I then used an off camera Speedlight pointed straight up (Change #2) to evenly light the target instead of a shoot through umbrella and used ETTL. I shot in I shot in "One Shot" with the center point as my focus point, used mirror lock up, a two second timer, a shutter speed of 1/500 and at f2.8 with an ISO of 400 for everything. I begin with 0 correction, of course. So there is the set up.

With the 24-70 I started with 70mm and took a series of five photos. However before I take each photo (change #3...and what I think really made the difference) I manually rotated the focus ring completely in one direction so that the focusing mechanism had to fully travel to achieve proper focus. When I examined the images in Lightroom at 100 percent, I found that four of five images showed about the same amount of front focus. The fifth image showed a significantly different amount of front focus. I reasoned that I could discard this image as an outlier and relied on the data from the other four. I went back and repeated the same process for each amount of MFA that I chose, discarding any single outlier. At the end I shot 10 images and found that I got acceptably consistent results (my non-scientific definition to mean “I’m good with that”) in 9 of 10 images. I repeated the entire process for 24mm with the same result.

For the 70-200 I did essentially the same thing, however (change #4) I made sure to have the distance limiter set to 1.2 meters. In the series of 10 images I would only get between 7 and 8 images that were “acceptably consistent” (yes, I repeated the sequence a few times). So I can conclude that with my 70-200 there is either some variation in the lens that prevents more consistent results or that the camera/lens combination is preventing better results. Since my lens is four years old and it gets a lot of use, I am leaning towards the lens being in need of some servicing.

Just for fun I tried manually focusing both lenses using Live View, and I ended up with the same focal plane as the AF system.

Anyway, I figured that since I discovered better results I would be sure to follow up here. Thanks for your comments.