Looking for a recommendation for a ultra-wide angle lens

I’m looking for and would sincerely appreciate your recommendations for the best prime EF-mount ultra wide-angle lens for use on Canon EOS crop-sensor (7D) and full-frame cameras (specifically 6D, and 6D Mk. II) for astrophotography.

(While there are excellent zoom lenses available, the possible risk of chromatic aberration makes them impractical.  That said, I’m a relative novice to astrophotography and still have a great deal to learn — so if you use a zoom lense for astrophotography, please let me know of your experience.)

I’m imaging asterisms and the Milky Way which require relatively longer exposures but I wish to avoid having stars appear oblong in shape from too-long an exposure; to that end, I need the fastest glass possible to obtain as much detail a lens is capable of capturing — as well as the quality of the detail that is captured. Canon’s 14mm f/2.8L is a good lens, but is it the best quality glass (assuming that cost is not a factor) on the market?  It must be heresy to ask if other manufacturers produce a better lens, but I’m willing to consider all contenders as long as the lens is compatible with my Canon cameras: price is not a consideration.

As I disable autofocus and image stabilization in taking these types of photos, a manual focus (only) lens such as those made by Zeiss is perfectly acceptable.

I’m well aware that below f/2.8, price increases dramatically: while having an equatorial mount would allow for longer exposure times without star distortion, it would create problems for foreground terrain blurring and additional post-production labor, which I’d like to avoid if possible. My 6D is heavily modified for heat reduction and has had its IR filter removed so that light in wavelengths of 656.28 nm appear in photos, but the scale of these structures make use of a telescope impractical.  Light pollution poses another difficulty with increased exposure times, so high-quality fast glass is a better option for my purposes.

Any lens f/2.0 or below, in the range of 8-18mm, might be ideal.  I would appreciate anyone with experience with this lens type sharing their recommendation.

" One of my mentors reads me the riot act if I begin with what he calls one of my “Brownie” photos, and has challenged me to find my “A” game."

Sounds like a hint to learn more about image stacking to me.

"Nothing is worse than dragging 2-300 pounds of gear up mountain slopes to a photography site and finding out that your new lens is crappy, unless it’s to find out that your photos are all out-of-focus."

Practice taking shots with your UWA lens of landscapes and cityscapes. The hyperfocal distance on UWA lenses tends to be very short.  Learn where the ideal point is on your focus ring.  Just remember that it may shift somewhat at different ambient temperatures.  So, go outside an take photos on a very cold day.

I have dabbled with photographing the night sky using a Rokinon 14mm T3.1 with surprising good results for the shooting conditions.  There have been many complaints about the "photo" version of the lens.  Over time, I have bought three of the T3.1 cinema lenses, and they have all been fine.  I have not tried the newer Rokinon lenses, which communicate with the camera body, but are still manual focus. 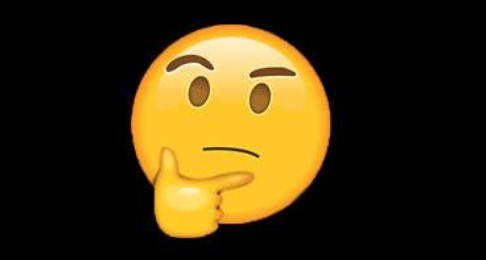 Nah!  Someone has to be the adult in the room.

I know... had the same response a few times.

As long as the G11 has a precise polar alignment (I typicaally use a "PoleMaster" system by QHY-CCD) then unguided exposure duration shouldn't be a problem.  I've done 8-minute un-guided exposures with mine with a 540mm APO on the mount (I use a TeleVue NP101is refractor).  The shorter the focal length, the more forgiving it is about tracking accuracy.  If your G11 mount has the Gemini 2 controller then there is a built-in polar alignment assistant you can use.  Losmandy has a YouTube channel and a tutorial video on how to use that feature.

But lenses also have optical issues which can causes the brighter stars to no longer be "round" when shooting long exposures.  The lower the focal ratio, the more you would notice these effects.

Lenses don't create a perfectly "flat" field (even very expensive lenses).  If the lens is focused to tack-sharp in the center, objects in the corners will not be tack-sharp.  But you can think of field flatness applying to more than just focus... there's also flatness with regard to coma and astigmatism.

When you shoot a lens wide open for long periods of time, it allows the photons to collect and can reveal issues such as astigmatism or coma that wont be easily spotted in traditional photography.

Coma can cause stars to take on a tear-drop appearance.  Astigmatism can cause the stars to appear to grow tiny "wings".  If you check the orienation of these effects on various stars you should notice a pattern where they are oriented with respect to the center of the frame.

If you stop down a bit, you can cut down on the issues.  Of course you are also collecting less light so now you need a longer exposure to compensate.  But even with the longer exposure times, the images are usually better.

The G11 mount will *easily* handle very long exposures (I've done 8-minute un-guided exposures with a 540mm APO on the mount) ... as long as you have a precise polar alignment.

If your non-round stars are oriented all pretty much in the same direction then this usually means you are experiencing some sort of tracking issue (e.g. mount did not have an accurate polar alignment, mount was bumped or moved, incorrect tracking rate, etc.)   If the non-round stars have an optical effect with an orientation relative to the center of the frame, then it is probably related to an optical effect of the lens (and stopping down will usually reduce or eliminate the issue). 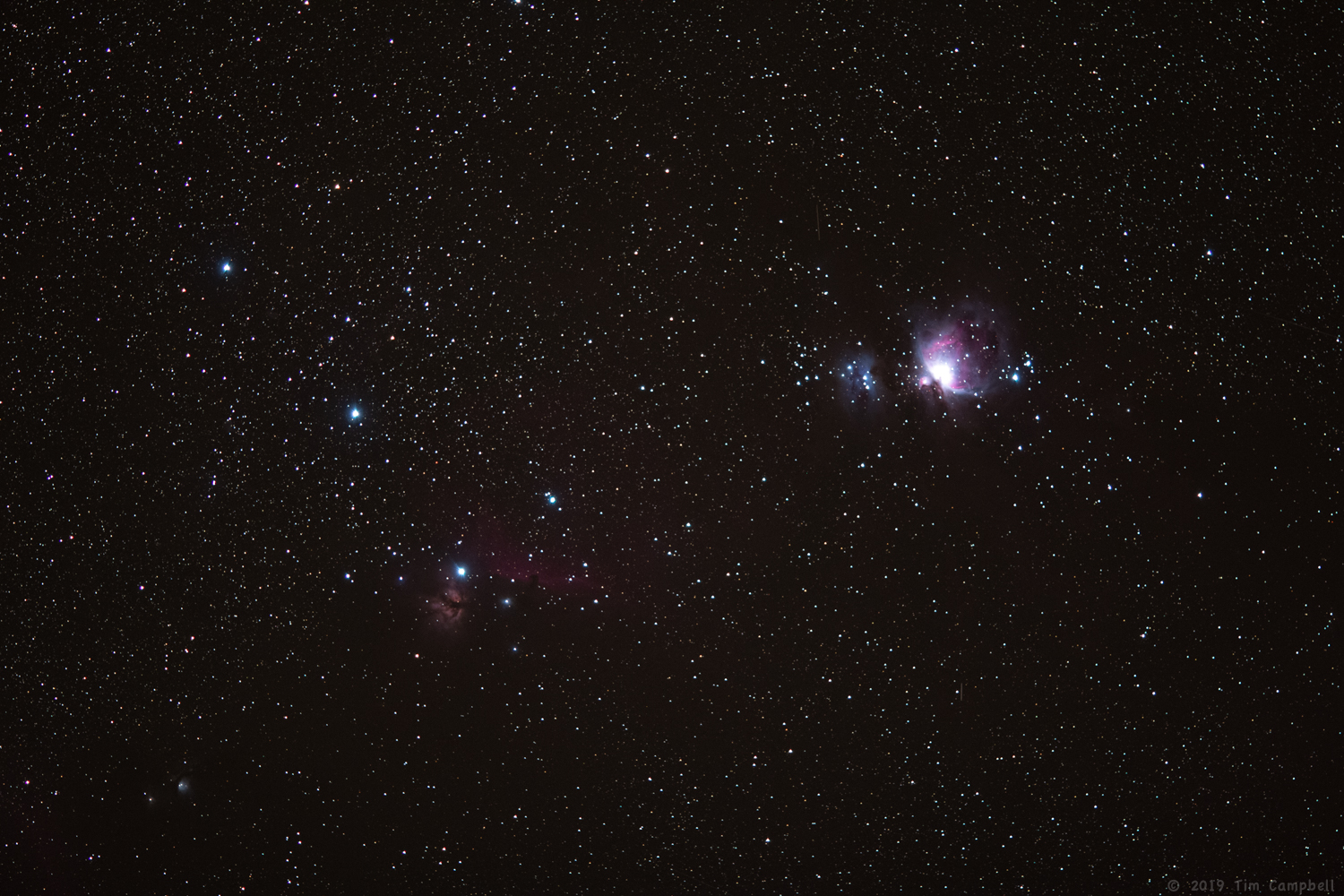 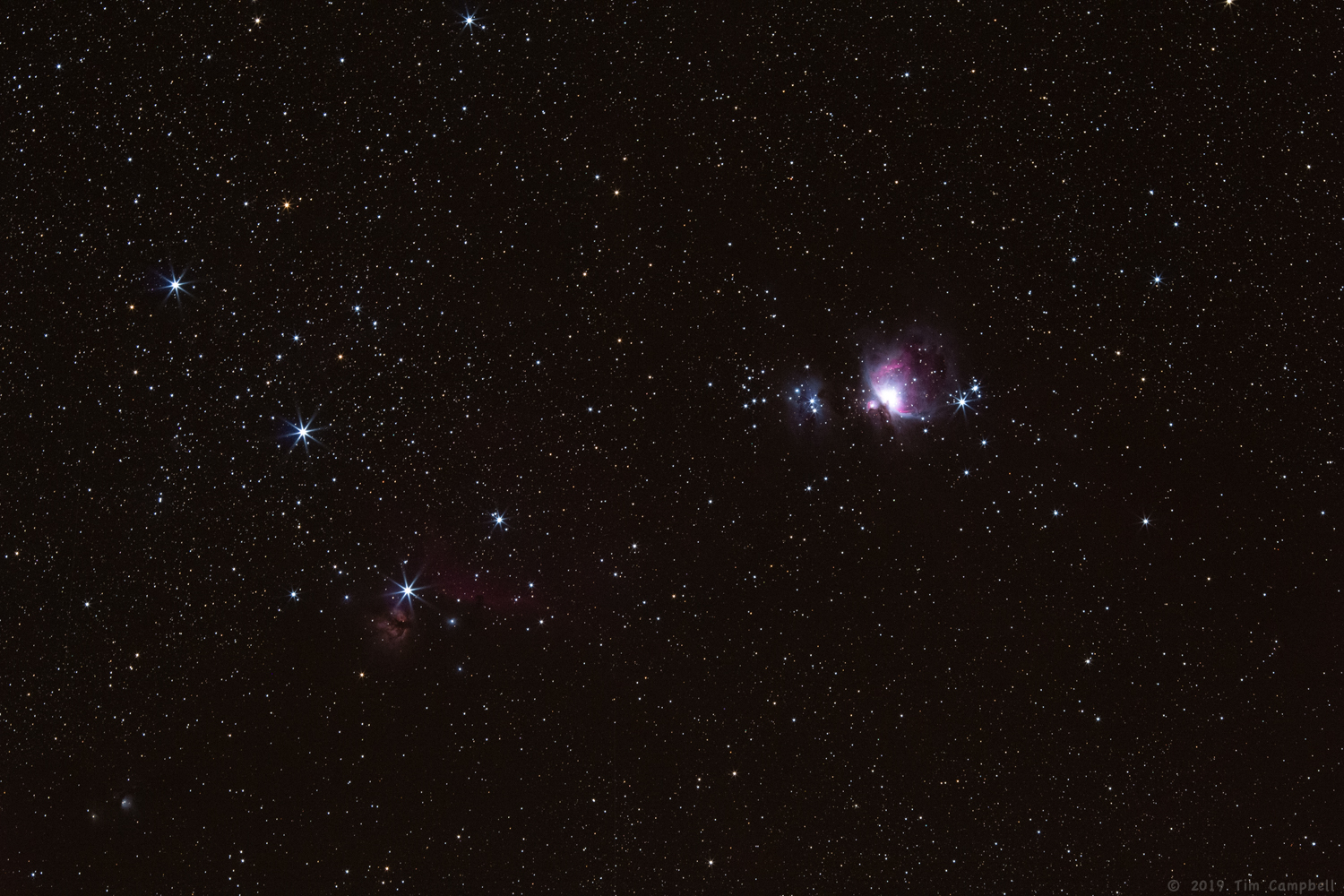 Full disclosure... the first image is the converted CR2 into a JPEG with no adjustments other than Lightroom default profiles.  The second image was darker so I boosted exposure by .85 in Lightroom ... but no other adjustments.

Mainly look at the three stars on the left (this is the lower region of Orion turned on it's side).

Notice in the 2nd image at f/10 that the stars are diffraction spikes caused by the lens aperture blades but otherwise everything is tack sharp.

But also notice that the first image shows some little bat-wings coming away from the stars ... in the meridonal direction. (much easier to notice if viewing the image in a larger size).  If you imaging concentric rings around the center of the image, these bat-wings are extending along the direction of those rings.

The more the lens is stopped down, the lens of the overall glass is used.   Mostly the center of the glass elements is used and that region tends to be optically better.

Some guidance that an accomplished astrophotographer gave me when I started was to orient the camera so the top of the frame is "north up" (the viewfinder bump on the top of the camera should be pointed in the direction of the north star).  This makes it much easier to determine if elongation caused by tracking issues is a result of poor right-ascension tracking vs. declination drift.  If the issue is caused by alignment or mechanical issues with the mount, this makes it easier to diagnose.

Hopefully this info is helpful and lets you get much longer exposure durations.

I shoot the 15mm Tamron at 2.8 all the time, 2000ISO no softness issues whatsoever. If I could figure out how to link and pic from my phone I'd show you.
0 Likes
Share
Reply
Go to solution 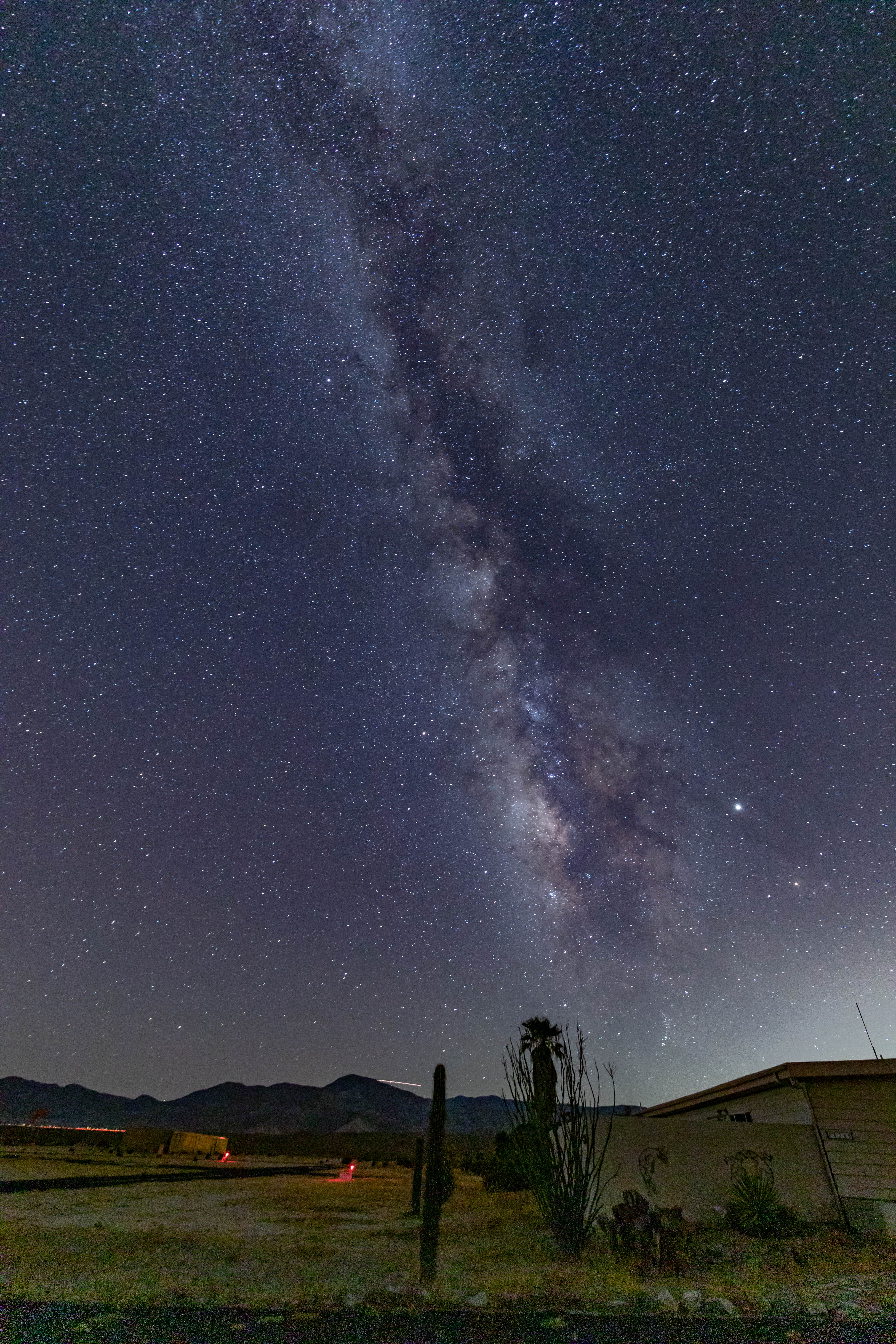 The above image is from the Tamron 15-30 f2.8 G1 verson of the lens on a canon 5DM4, 30 second exposure, 2k ISO, manual focus, remote shutter release. Yes, there is fringe distortion which can only be corrected to a point. However, when not using recognizeable elements at the edges I find the lens more than capable.

Thanx for the example.  You have the G2 version to be clear?  I had the SP, I know of no G1 but I may have missed it.

It is a gorgeous shot, you can be proud of.